The Poway shooting exposes the fractured state of our communal discourse 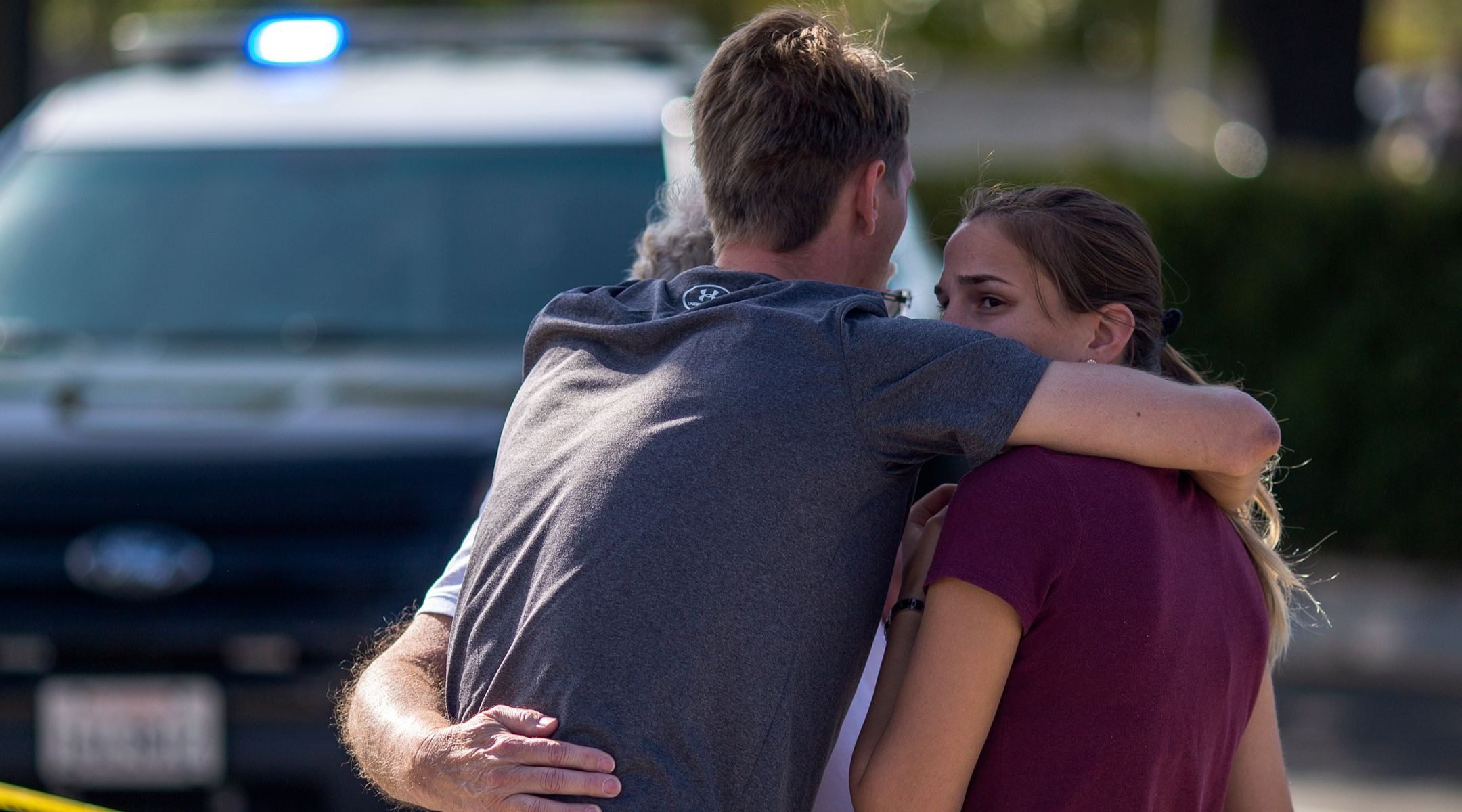 People embrace outside the Congregation Chabad synagogue in Poway, California after a gunman opened fire during services on the last day of Passover, April 27, 2019, leaving one person dead and three others injured. (David McNew/Getty Images)
Advertisement

(JTA) — Here’s what we know about the shooter who took the life of a worshipper at a San-Diego area Chabad and wounded three others: He was a white, 19-year-old college student who grew up in an Orthodox Presbyterian church and he may or may not have tried to set fire to a nearby mosque last month, perhaps inspired by the terrorist attacks at two mosques in Christchurch, New Zealand.

What we didn’t know: Why he targeted a synagogue; why he wanted Jews to die; what combination of personal madness and outside influences drove him to murder and terror.

What we don’t hesitate to do in the absence of hard information: Draw our own conclusions; lay blame; wedge the shooter’s scant bio into the political frameworks that we’ve already erected.

The “react” story has long been a staple of ethnic journalism. After a big global or national event, you round up the reactions of, in our case, Jewish organizations. Rarely are these condemnations or celebrations surprising or even very interesting. Sympathy at natural calamities, outrage at manmade ones, thumbs up or thumbs down when the story is political, depending on your ideology.

As to anti-Semitism reacts, how many ways can an organization express its dismay at acts of anti-Jewish hatred, except to go to the thesaurus? They’re a “scourge,” a “disease,” a “poison,” a “pathology.”

But that formula has changed, like just about everything else, certainly in the past three years, and perhaps over a decade and more. Jews can no longer agree on how to regard anti-Semitism. The left focuses on a far right energized by the rise of nationalist populism and politicians whose own nativist views sound awfully familiar to historians of hate. The right sees anti-Israelism as the “new anti-Semitism” and regards as the biggest threat those whose support for the Palestinians quickly devolves into classic anti-Jewish “tropes.” Centrists are criticized for trying to straddle the line because failing to take sides means they are weak on [insert your enemy here].

The dynamic was on display in the hours after the shooting at the Poway Chabad. The Anti-Defamation League, long the community’s compass on anti-anti-Semitism, avoided the blame game.

“It’s heartbreaking to see yet another tragedy on Shabbat, on the last day of Passover, exactly six months after the shooting at the Tree of Life synagogue in Pittsburgh,” which claimed 11 lives, the ADL wrote Saturday.

But the ADL also didn’t look to include the Poway shooting into some sort of grab bag of anti-Jewish threats on the left and the right, which has become the safe way to talk about anti-Semitism. Instead it compared the shooting only to the recent attacks carried out by white, male lone wolves — Christchurch, Pittsburgh — and to the far-right hatefest at Charlottesville. Given what was and is still known about the Poway shooting, the statement felt measured and factual. It was in keeping with an ADL report from earlier this year noting that nearly all recent acts of violent extremism in the United States were carried out by white supremacists, not Islamists or pro-Palestinian activists.

Others saw in Poway a reflection of their worst fears and bêtes noires. For a left-wing group like Bend the Arc: Jewish Action, the blame lay squarely on the White House and its current occupant.

“Although it may be hard to accept, the fact that we witnessed yet another act of white nationalist violence is sadly not ‘hard to believe,’ as President Trump said in response to the shooting,” Bend the Arc said. “Not when the President and his allies have helped mainstream white nationalism in American politics, making our nation ripe for the acts of terror in Poway and in Pittsburgh, where both shooters were inspired by conspiracy theories peddled by the President and his allies, and contributing to an increase in acts of anti-Semitic, anti-Muslim, anti-immigrant, anti-Black and anti-LGBTQ violence in recent years.”

The Friends group was fast out of the gate with a statement saying that “anti-Semitism and hate at large continues to increase year to year as nationalist white supremacist groups expand globally,” but expanded the camera view to include “extreme leftists [who] unfairly and hypocritically defame Israel and radical Islamists [who] push an anti-Zionist agenda.”

It also included in its statement a condemnation of what normally would have been the most outrageous anti-Semitic act of April 28, 2019: A cartoon that appeared in The New York Times international edition depicting Israeli Prime Minister Benjamin Netanyahu as a guide dog (a guide dachshund, actually), leading a blind Trump. The dog’s collar has a Star of David and Trump is wearing a black yarmulke, pushing the cartoon out of the realm of political commentary and into Der Sturmer territory.

Unlike Bend the Arc, however, the Friends of the Wiesenthal Center statement did not point fingers at the American president or mention the actual Nazis who marched at Charlottesville or ran as Republicans in last year’s midterms. Instead it condemned college students and professors who support the boycott of Israel, and leftist political leaders like the British Labour Party’s Jeremy Corbyn and Rep. Ilhan Omar, D-Minn., “who have been accused of promoting anti-Semitism and of trying to create a wedge between their countries and the State of Israel.” It also singled out the United Nations for its “baffling” anti-Israel resolutions.

(For its part, the Simon Wiesenthal Center in Los Angeles, whose founder gave the benediction at Trump’s inaugural and has praised the president often for his full-throated support of Israel, likened the Poway shooting to attacks on other houses of worship in Sri Lanka, France, Jerusalem, Pittsburgh and Christchurch. It didn’t use the occasion to condemn the left.)

There was still another approach, which was to find the commonalities among the various brands of contemporary anti-Semitism.

“The antisemitic intersection of white nationalism, anti-Zionism and Islamic Jew-hatred is to render the Jews isolated and powerless,” tweeted Einat Wilf, who served in the Israeli Knesset as a member of the Labor and Independence parties. “Each feeds off the others as evidence that Jews have no allies, and therefore could be bullied, maligned, injured and killed, with no consequences.”

Unsurprisingly, this common cause approach is rarely the way of Twitter, where the left-right divide is often on full display. Either modern anti-Semitism is Trump’s fault, or the Boycott Israel movement is the greatest danger facing the Jews. That New York Times cartoon was the result of vicious anti-Zionism gone mainstream or part of the coarsening of the public discourse led by the “alt-right.”

At a House Judiciary Committee hearing on “Hate Crimes and the Rise of White Nationalism” earlier this month, the president of the Zionist Organization of America, Morton Klein, devoted almost the entirety of his testimony to denouncing the anti-Semitism on the far left and among anti-Zionists and radical Muslims. He also included a section defending Trump against charges that the president hasn’t done enough to denounce far-right anti-Semitism.

In its statement on Poway, the ZOA called for congressional action against…Omar, Rep. Rashida Tlaib (D-Mich) and Students for Justice in Palestine.

For many there appears to be a fear that if the focus turns to one side of the political spectrum, we’ll go soft on the anti-Semitism coming from the other side.

The historian Deborah Lipstadt notes this politicization of anti-anti-Semitism in her new book, “Antisemitism: Here and Now.”

“Don’t see anti-Semitism only on the other side of the political transom from which you are located,” she warned in an interview with the Jewish Telegraphic Agency. “If you’re only seeing it on the opposite side of the transom, you’re instrumentalizing this for political purposes.”

The Chabad movement, whose affiliated center was the target of the attack, kept out of the political fray. Even amid its own grief, a statement from its national headquarters did something that many other organizations have often failed to do in these polarized times. It spoke to all Americans, not just to or at the partisans.

“Let us remember that while primitive hatred against Jews was allowed to fester in many other countries, ultimately to the detriment of all their citizens. America’s values of tolerance and lovingkindness, and its commitment to law and order have been its greatest assets,” Chabad says in its statement.

Then it quotes Rabbi Yehuda Krinsky, the chairman of the Chabad-Lubavitch educational and social services arms.

“The alarm bells of recent events are ringing, and we call upon leaders from across all political divides to stop the dangerous, downward spiral of anti-Semitism,” Krinsky said. “In the spirit of Passover, the Festival of Freedom, may we each commit to work to bring security, healing and unity to our fractured nation.”