Famed Nazi hunters Beate and Serge Klarsfeld: It feels like the 1930s 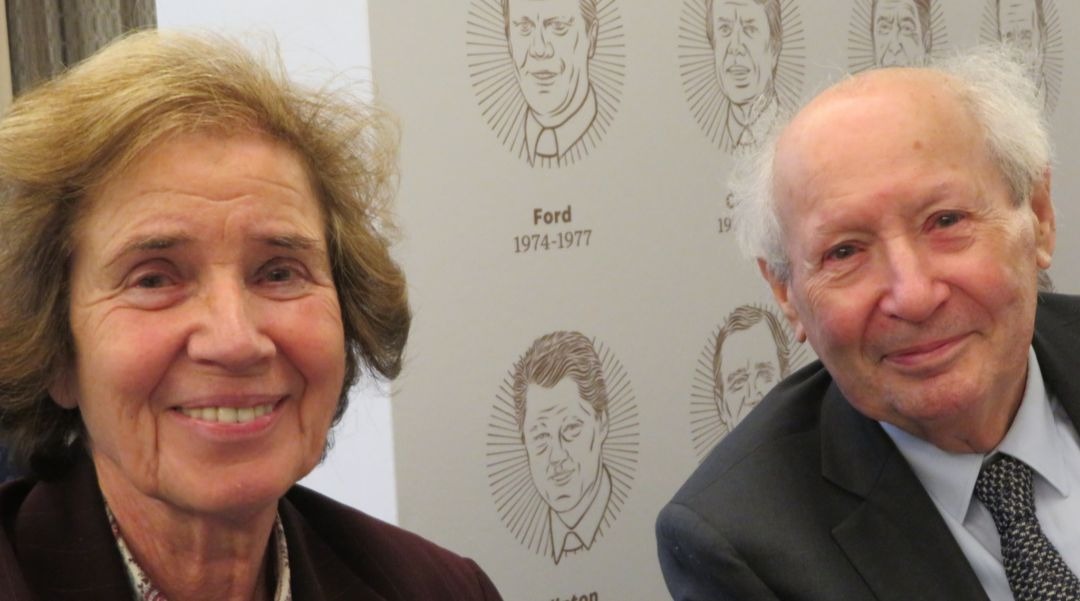 WASHINGTON (JTA) — It’s not an unfamiliar frame for describing the rise of the new nationalism: There’s a bad wind blowing through the West, and nothing less than democracy is at stake.

What makes it especially unsettling for Beate and Serge Klarsfeld is that they have lived through it before — and spent a subsequent lifetime trying to make sure the “bad wind” did not return.

“There is a bad wind in Europe and democracy is losing its influence,” Serge Klarsfeld told the Jewish Telegraphic Agency in an interview Monday, just before he and his wife received the U.S. Holocaust Memorial Museum’s Elie Wiesel Award for their lifetime of hunting Nazis and forcing Europe to confront its past.

In their final years, the Klarsfelds have taken to arguing that the best means of preventing the return of anti-Semitism and corrosive prejudice is protecting institutions like the European Union.

The rise of nativism in the United States and Europe, the persistence of anti-Semitism and a number of high-profile anti-Semitic attacks — these elements do not surprise the couple. They take the long view: Live long enough, said Serge Klarsfeld, who is 83 (Beate is 80), and what went around will come around again.

“It’s an atmosphere like the beginning of the ’30s, and the authority of the state is at stake,” Serge Klarsfeld said.

“We are sorry to see each Saturday the Gilets Jaunes,” the populist “yellow jacket” movement demanding increased economic benefits in France, he said. Some of its followers include nativist and anti-Semitic elements “on the streets with anti-Semitic slogans against Jews coming from the extreme right. You see people with the hand like a Hitler salute, publicly.”

They also are not surprised by white supremacy’s resurgence in the United States, nor the murderous attacks carried out by white nationalists, most recently on a synagogue in the San Diego area last weekend.

“There was always the Ku Klux Klan,” Serge Klarsfeld said. “There were very many violent actions against Jews and black people, against others, it cannot disappear in a few decades.”

Explicit anti-Semitism and to a lesser degree racism fell out of favor after World War II, but always existed below the surface, the couple agree.

“Anyone who wants to find an enemy finds an enemy in the Jew,” Beate Klarsfeld said.

The Klarsfelds have accrued multiple national awards over the decades. They are perhaps best known for tracking down Klaus Barbie, the notorious “Butcher of Lyon,” in Bolivia. They also exposed Kurt Lischka, who served as chief of the Gestapo in Paris.

As the publisher of a recent joint biography, “Hunting the Truth,” puts it, “they were born on opposite sides of the Second World War”: Beate to a German father who served in the Wehrmacht, Serge to a Jewish father who was deported to Auschwitz.

(In 1986, the couple got the Hollywood treatment, portrayed by Farrah Fawcett and Tom Conti in a well-received made-for-TV film.)

The Klarsfelds are using the influence they have accrued through their lifetime of work to help the institutions they say have protected Jews and other minorities. They have published ads in France urging votes for the pro-European Union parties in the next European Parliament elections at the end of May.

“The fight against anti-Semitism is not the priority,” Serge Klarsfeld said. “The priority is the defense of democracy to defend the republican state of France and democracies in other states in Europe.”

Democratic institutions, and the the expansion of the European Union after the breakup of the Soviet empire, is what has kept the peace for seven decades on a continent wracked for centuries by war.

In a back-and-forth dialogue, the Klarsfelds list the elements they say have eroded attachment to the European Union among Europeans: a resentment of the flood of migrants after the 2011 Arab Spring, particularly in Eastern Europe, where homogeneous societies were ill prepared for assimilating other cultures; a decline of Holocaust education; interference by China and Russia, which are inimical to a unified Europe; and the pan-European ultranationalist movement promoted by Steve Bannon, President Donald Trump’s former adviser.

They also blame a generation of Europeans who took progress for granted.

And they say the erosion of trust in democratic norms comes from three directions: the left and its anti-Zionists; the right and its ultranationalists; and Islamists who live among the migrant communities.

“It has to be done much more,” Beate Klarsfeld said of Holocaust education, particularly among the migrant young. “It’s not the priority today to work with the youth.”

“I have not heard President Trump take a strong position against the far right here, whereas in France, in Germany and elsewhere in Europe, leaders of states always have a firmer response,” he said. “Either he fails to see the danger or he doesn’t believe it is dangerous.”

Speaking to JTA, the Klarsfelds acknowledge an anomaly: Israeli Prime Minister Benjamin Netanyahu embraces the very authoritarians they hope to defeat in the next parliamentary elections. And Trump, who has worked closely with Netanyahu on Middle East policy, also has derided the international institutions the Klarsfelds say preserves security for Jews.

“We are grateful to President Trump for what he did for Israel, and we understand that Israel has diplomatic reasons for allies in Eastern Europe, authoritarian regimes like Poland and Hungary,” Serge Klarsfeld said. But the cross-European institutions are critical, he said. “Europe, it’s a continent that has only known wars for centuries and centuries and for 70 years you have no more wars.”

The Klarsfelds are resigned to the fight to preserve that peace, even if it outlasts them.

“You never know what will happen after you disappear, you never know whether your side will be victorious or not,” Serge Klarsfeld said. “You can leave a legacy to help others.”