4 Democratic presidential candidates weighed in on the Gaza violence 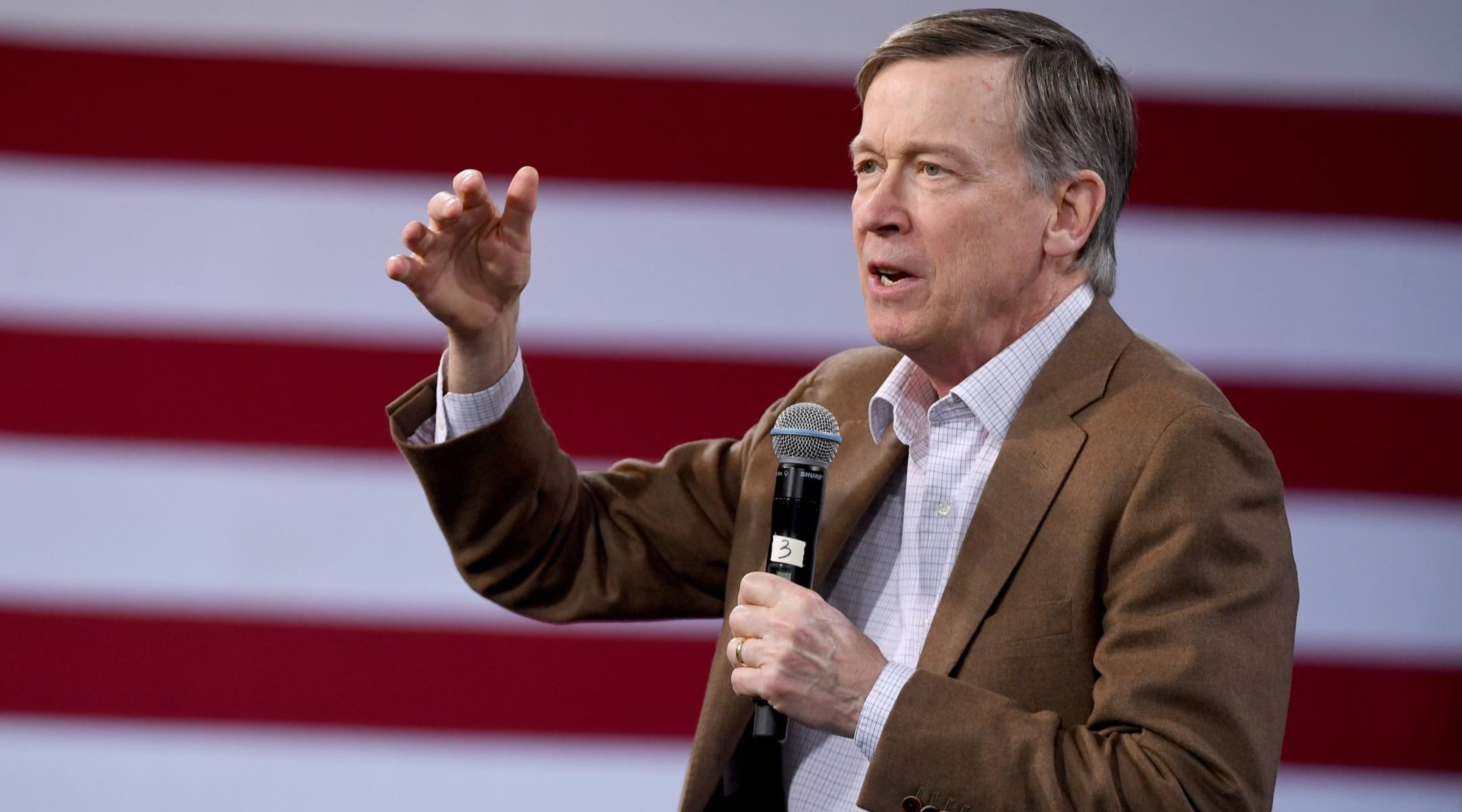 Former Colorado Gov. John Hickenlooper, a Democratic presidential candidate, speaks at the National Forum on Wages and Working People: Creating an Economy That Works for All at Enclave in Las Vegas, April 27, 2019. ( Ethan Miller/Getty Images)
Advertisement

WASHINGTON (JTA) — President Donald Trump volunteered a view on the deadly flareup in clashes between Israel and terrorist groups on the Gaza Strip border this weekend.

“Once again, Israel faces a barrage of deadly rocket attacks by terrorist groups Hamas and Islamic Jihad,” the president said on Twitter. “We support Israel 100% in its defense of its citizens. To the Gazan people — these terrorist acts against Israel will bring you nothing but more misery. END the violence and work towards peace — it can happen!”

Hickenlooper sounded a similar note in a tweet, although he urged restraint from “all parties.”

“The random rocket fire by Hamas into Israel must stop,” he said. “My heart goes out to the families of the Israelis killed, and those wounded in these grievous attacks. I call on all parties to show restraint and de-escalate this situation immediately.”

“We support Israel’s right to defend itself, full stop,” he said. “You have a terrorist organization that actually suppresses its own people, conducts acts of violence and human rights violations against people who live in Gaza. And so Israel has a right to defend itself and it should do that.”

Booker’s comment was solicited by the reporter — unlike Hickenlooper, he did not volunteer a statement — but the New Jersey senator appeared eager and prepared for the question.

On Monday evening, Rabbi Rick Jacobs, the president of the Union for Reform Judaism, called on candidates to speak out.

“We deeply appreciate the long-time support for Israel of both the Republican and Democratic parties,” Jacobs said on Twitter. “We continue to urge all leaders of those parties, including those Democratic and Republican presidential candidates who haven’t yet spoken to the recent rocket attacks from Gaza, to stand by Israel at this time of need.”

Later Monday and after an earlier version of this story was posted, Bennet posted his comment.

“We stand behind Israel’s right to self-defense against rocket attacks by terror groups inside Gaza,” he said on Twitter. “Launching rocket attacks against innocent civilians is unacceptable and we mourn the lives lost. A cessation in violence is a necessary step toward de-escalation and stability.”

Gravel, decades out of office and an outlier among the candidates, called for dismantling Israel as a Jewish state.

“The bloodshed in Palestine and Israel will not cease until the fundamentally unjust existing structure is jettisoned,” he said on Twitter. “We cannot support a right-wing racist regime committed to annexation and gradual ethnic cleansing. There must be a binational state with equal rights for all.”

Otherwise, the Democratic candidates were silent, from the usually vocal pro-Israel figures like Sen. Amy Klobuchar, D-Minn., who took time out to attend an American Israel Public Affairs Committee event in Boston, to the usually Israel critical, like Sen. Bernie Sanders, I-Vt., who had referred to Gaza the day before hostilities erupted at a town hall in Perry, Iowa. He repeated his call for a more evenhanded U.S. approach to the region.

“Innocent civilians lie dead in the wake of Hamas’ brutal rocket attacks in Israel,” de Blasio, who is expected to announce this week, said on Twitter. “It’s an affront to humanity. This city stands united against this indiscriminate violence and we join the world in mourning the lives lost.”

Congressional leaders across the board were more willing to pronounce on the issue and were overwhelmingly on Israel’s side.

“Hamas must immediately stop launching rockets into Israel,” Rep. Steny Hoyer, D-Md., the majority leader in the U.S. House of Representatives, said on Twitter. “The targeting of innocent communities is never acceptable. The United States Congress, in a bipartisan fashion, stands strongly in support of our ally Israel and its right to protect its citizens.”

Rep. Kevin McCarthy, the House minority leader, was as unequivocal.

“Israel has every right to defend itself against the 600 rockets that Hamas has fired during the last 48 hours,” the California Republican said on Twitter. “The United States will continue to stand with our ally Israel and the Jewish people.”

Sen. Chuck Schumer, D-N.Y., the Senate minority leader, told Jewish Insider: “Israel has every right to defend herself from indiscriminate rockets attacks, the same right as any other nation. The United States stands shoulder to shoulder with the people of Israel.”

Five Jewish House Democrats, including three committee chairmen, said Israel had a right to defend itself, and praised the Iron Dome system, in part funded through congressional appropriations, for keeping more missiles from hitting targets.

“In response to the continued, indefensible attacks by Hamas, Palestinian Islamic Jihad and other terror groups, Israel has a right and responsibility to defend itself and its citizens militarily from further violence. Israel must be able to sustainably protect its people as it continues to pursue a ceasefire,” said the statement by Reps. Eliot Engel of New York, the Foreign Affairs Committee chairman; Nita Lowey, also of New York, the Appropriations Committee chairwoman; Ted Deutch of Florida, the Ethics Committee and Middle East subcommittee chairman; and Brad Schneider of Illinois and Josh Gottheimer of New Jersey.

One dissenter: Rep. Rashida Tlaib, D-Mich., a Palestinian American who criticized The New York Times for a headline on a story about the clashes. In suggesting Hamas rockets prompted Israeli retaliation, the headline promotes a “lack of responsibility on Israel,” she said.