Documentary on Dr. Ruth delves into the sex therapist’s Holocaust past 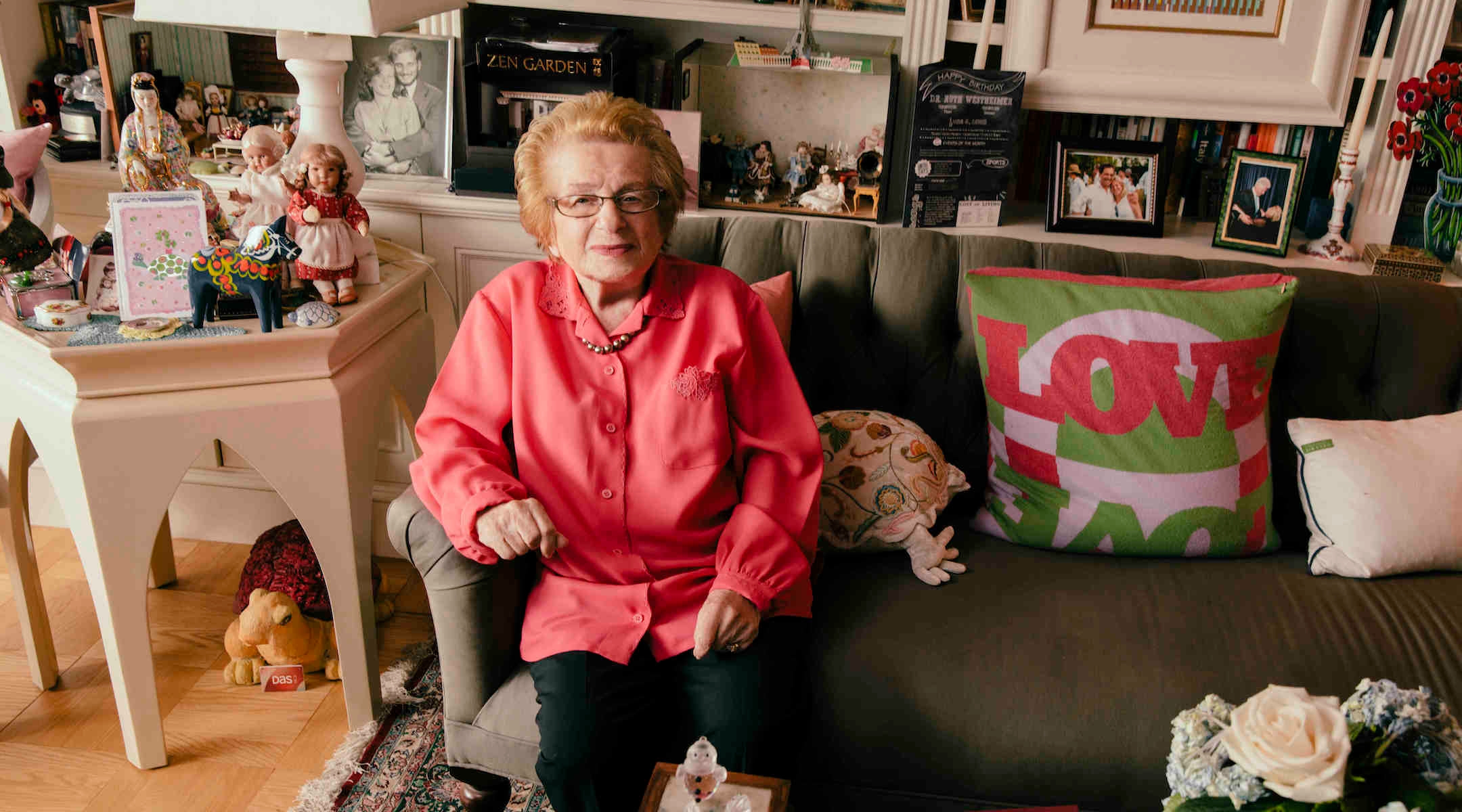 One of them, Ruth Westheimer — better known as the renowned sex therapist Dr. Ruth — is on the phone to talk about her life and a new documentary about it. But first she notes a similarity between her story and that of the other Ruth who recently had a documentary made about her — the one who sits on the U.S. Supreme Court.

Westheimer, who turns 91 next month, is talking about “Sexually Speaking,'” which launched in 1980 on the now defunct WYNY-FM. It broke broadcasting taboos about talking about sex and helped make her the most famous sex therapist in the world — one also known for her diminutive stature (about 4-foot-7), motherly demeanor and thick German accent.

But as the viewer learns in “Ask Dr. Ruth,” which is now playing in a few New York theaters and streams June 1 on Hulu, there’s a lot more to Westheimer’s story than sex.

Westheimer was born Karola Ruth Siegel in Germany, the only daughter of Orthodox Jews. She was 10 years old the last time she saw her father — from her apartment window as he was arrested by Nazis. It was November 1938, the day after Kristallnacht, and his detention was a clear portent of what awaited the country’s Jews. Shortly thereafter, her mother arranged for her to leave Germany for Switzerland as a member of a 300-strong Kindertransport. She never saw her parents again, and believes they perished at Auschwitz.

In Switzerland she was sent to an orphanage where, in the film, Westheimer says the Jewish children were treated like second-class citizens, forced to take care of the Swiss orphans and do housekeeping. Still, she says, the Swiss saved her life.

“I have wonderful memories of the Swiss,” she said. “Otherwise I would not be alive. I have only one complaint: Girls couldn’t go to high school. They made all the girls get household helper diplomas, so I spent two years learning how to be a housemaid. Luckily for me I didn’t have to use it.”

At war’s end, she immigrated to then-Palestine, lived on a kibbutz and joined the Haganah, the precursor to the Israel Defense Forces. Westheimer trained as a scout — and also a sniper. She never shot anyone, but was severely wounded by an artillery shell during the War for Independence in 1948.

She moved to Paris with her first husband, to New York with her second. She has earned degrees in psychology (Sorbonne), a master’s in sociology (from the New School) and a doctorate in education from Teacher’s College at Columbia University. She married her third husband, Manfred Westheimer, in 1961, and they were together until his death in 1997.

Westheimer says her career as a sex therapist was an accident. She was teaching public health at Columbia when the funding for her program ran out.

“I needed a part-time job while my children were growing up, and I was offered a position doing research for Planned Parenthood and I thought, all these people, all they do is talk about sex,” she said.

Fascinated, she did postdoctoral work with the noted sex therapist Helen Singer Kaplan and taught at various colleges until she was hired by a local radio station for a 15-minute show that aired at midnight Sundays — a time when it was presumably safer to discuss contraception and orgasms.

The show took off, and in relatively short order she became a star. From 1984 into the early ’90s, Westheimer hosted multiple cable TV shows on sex. 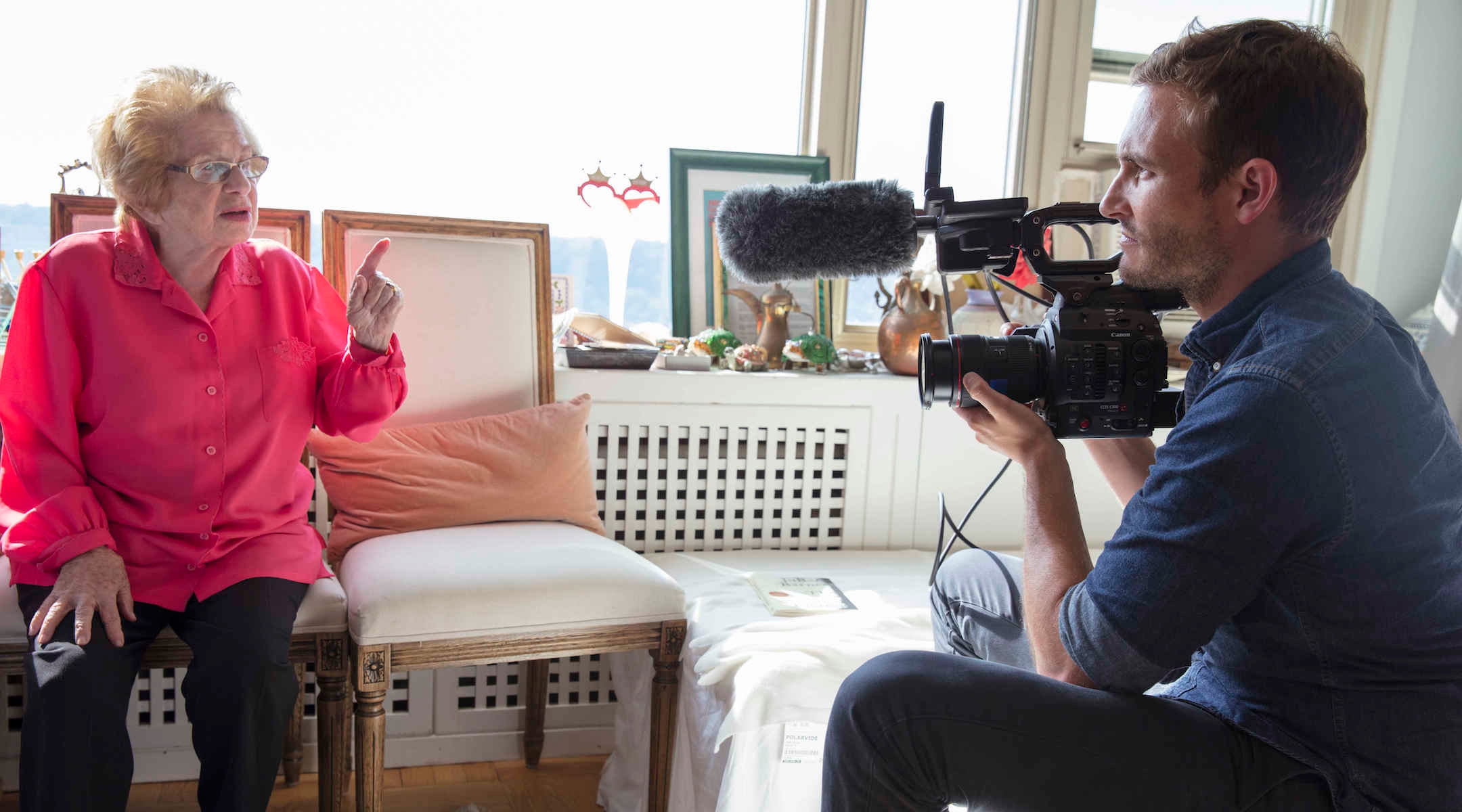 As the film documents, the woman once described in a newspaper article as “the happy munchkin of sex” is still very feisty. On several occasions she interrupts director Ryan White to say he is asking “a stupid question.”

Westheimer suppresses a giggle when I mention that.

“Yes, I very often say to journalists, ‘next question,'” she says.

Is it possible that the career path she wandered into is, in a strange way, a culmination of all the bad things that happened to her as a youngster — losing her parents, the orphanage? That all that freed her to speak freely about taboo topics?

Westheimer doesn’t answer immediately, then says: “That’s a very interesting question. I would have to think about it.” She does, but not for very long.

“If I would have stayed in Frankfurt in the Orthodox Jewish milieu, I don’t think I would have talked about orgasms and erections,” she said. “It’s very interesting. Because I was an orphan at a very early age, I was determined to speak up explicitly about things I believe in.”

Through all the years of hardship, she says she has not cursed God. Westheimer adds that she belongs to two synagogues, one in the Washington Heights neighborhood of Manhattan where she lives, the other nearby in the Bronx. She also occasionally attends services at  Central Synagogue and at the Park East Synagogue, both in Manhattan.

As if that’s not enough, Westheimer is active as well with the The Museum of Jewish Heritage-A Living Memorial to the Holocaust. She was heading there later that evening to help host a VIP opening of a new exhibit: “Auschwitz. Not long ago. Not far away.”

“I want everyone to go to see it,” she said. “It’s like a grave for my family who don’t have [real] graves.”

Westheimer is active as a writer, too, most recently of “Roller Coaster Grandma,” a graphic novel-style autobiography for 8- to 12-year-olds that talks about her experiences during the Holocaust. In one section, she recalls taking two of her four grandchildren to an amusement park, where they all rode on the roller coaster. Well, not all: Dr. Ruth was too short.

There seemed only one more thing to ask: Was her own sex life good?

She was ready with the answer: “Next question.”