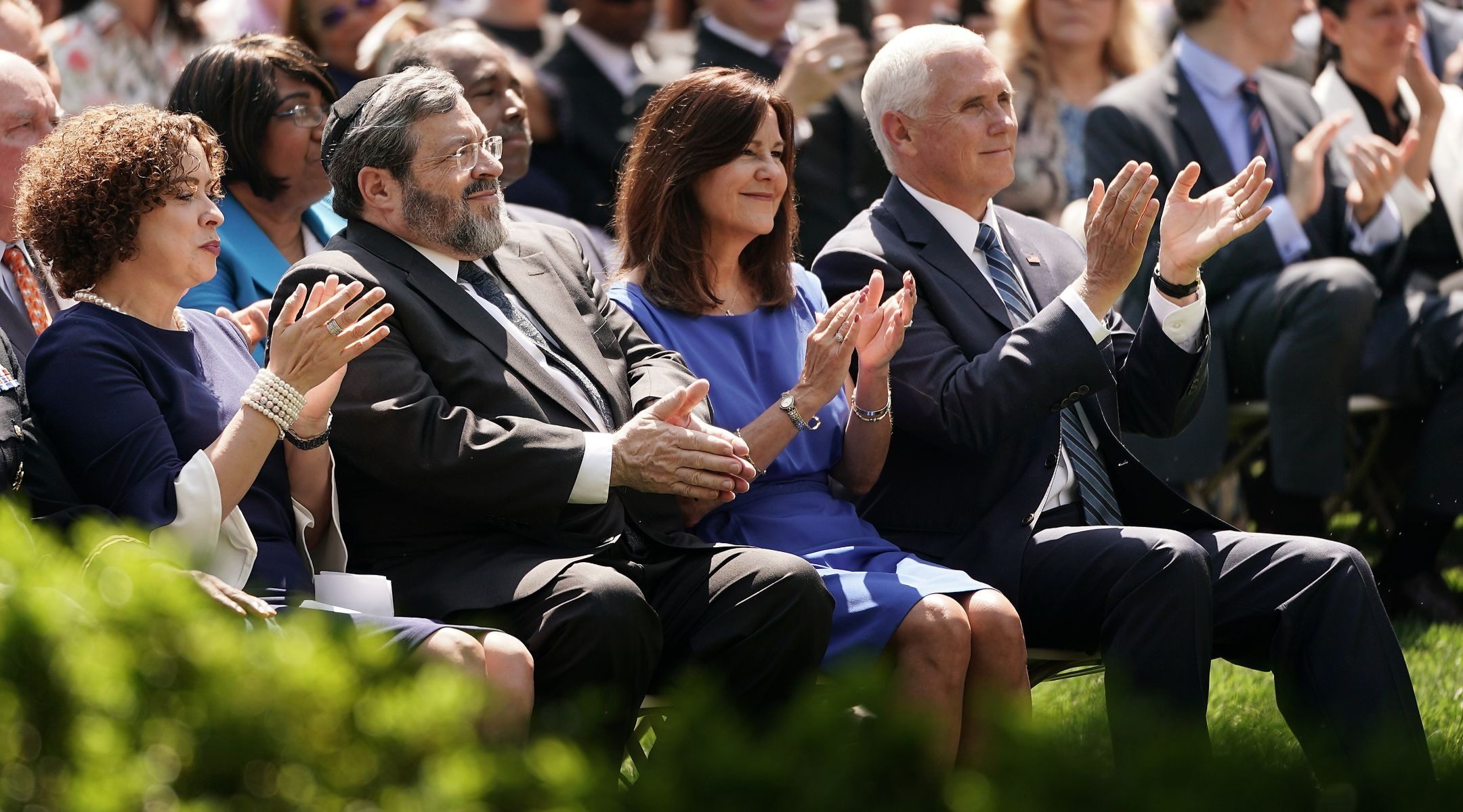 The changes would reverse eight years of Obama administration policy, which sought to expand access to birth control, abortion and medical services for women and LGBTQ people. Conservatives say the policy put government restrictions on what they deem are expressions of their faith.

Welcomed by the religious right, the new directives lay bare divisions within the Jewish community.

“The Trump administration has made significant strides in several important areas of religious freedom particularly as they relate to the Jewish community,” said Rabbi Abba Cohen, the vice president for government affairs at Agudath Israel of America, an umbrella body for haredi Orthodox Jews. Cohen delivered a prayer of thanks last week at the National Day of Prayer at the White House.

The liberal Jewish streams and Jewish civil rights group are expressing profound concern about church-state separations meant to protect Americans from the dictates of religion.

“Where religious freedom claims are pitted against important civil rights claims, the administration has done significant damage,” said Rabbi David Saperstein, the director emeritus of the Reform movement’s Religious Action Center and the ambassador-at-large for international religious freedom under Obama.

Not all of Trump’s policies have aroused liberal ire: Saperstein credits Trump with “rigorous” enforcement of protections for federal employees. Here are some of the Trump administration policies that are dividing — and occasionally uniting — the Jewish community.

Federal employees for decades have had the right to ask for religious holidays off, but the Trump administration toughened up the process for the administrators, favoring the employee making the request.

Employees now have a year to make up time taken for holy days through overtime. Previously it varied from agency to agency, and there might only have been a window of a few weeks. Additionally, administrators must now explain rejections in writing.

That gets across-the-board kudos. Efforts led by Agudath Israel to make holy day allowances less vague have long had the backing of civil liberties groups, including the Reform’s Religious Action Center.

Most policies ostensibly apply only to federal employees. Cohen, however, noted the rollover effect to state and local government, as well as to the private sector, where employers often look to federal government policies for guidance.

Last year, then-Attorney General Jeff Sessions told the Orthodox Union that he was launching training for federal prosecutors to assist houses of worship that have made claims under the Religious Land Use and Institutionalized Persons Act passed in 2000.

Cohen said that local zoning authority violations of the Religious Land Use Act have proliferated in recent years, with some local officials baldly saying they do not want Orthodox Jews in their constituencies. Denying permits to build or expand synagogues has been especially onerous for the Orthodox, who must live within walking distance of their synagogues.

“It’s become a way of keeping Jews out of the neighborhood,” Cohen said.

The federal government has become much more aggressive in assisting local Jewish communities in disputes with recalcitrant local authorities, Cohen said, for instance in convening meetings between federal officials and local communities to brief them on their rights.

The president was referring to rules that would allow medical workers and institutions to opt out of assisting in procedures that violate their religious tenets. These include abortions, procedures related to gender transition and end-of-life procedures.

Liberal women’s groups, LGBTQ groups and civil libertarians are alarmed by many of the expansions.

“The Department of Health and Human Services is supposed to stand above the fray in terms of discrimination,” said Nancy Kaufman, who is wrapping up her tenure as the CEO of the National Council of Jewish Women. “It has become a vehicle for making sure our religious rights are not respected. It’s appalling — the idea that anyone involved in a patient’s care could use their own beliefs to dictate services.”

Especially galling to Kaufman is the idea that the protections extend to institutions.

“Individuals have consciences,” she said. “I didn’t think corporations did.”

The Orthodox Union’s Washington director, Nathan Diament, suggested that the liberals’ objections are exaggerated. For one thing, he said, the rules are based on federal laws passed in the 1970s and already exist in many states. For another, they do not apply to emergency procedures, allowing patients the time to find providers who would be willing to carry out the procedure.

“If you’re a patient, you don’t want a doctor or nurse who has qualms about how they’re treating you,” Diament said.

Orthodox Jews do not oppose abortions to the same degree as conservative Christians. Nonetheless, the Orthodox favor the conscience rules because of the principle that religious observance should not be forced to defer to professional practice.

Cohen said that as end-of-life procedures become more intricate and complex, the Orthodox are still working through which religious principles apply and which do not — and Orthodox professionals do not want government forcing their hand. Halacha, or rabbinic law, often differs with the medical status quo when it comes to issues like resuscitation, removing a respirator and brain death.

“The technology is exploding,” he said. “It creates all kinds of areas of conflict and difficulty for health care providers for doing or not doing things based on their convictions.”

This takes the (wedding) cake

“The refusal to provide services to people in public accommodations and in commerce should never be based on the status of a person in civil rights law,” Saperstein said. “If people can make religious claims in their businesses not to serve gay marriages, they can do so against intermarriages, against Jewish or Hindu or Catholic marriages.”

Orthodox groups praised the Masterpiece ruling at the time, saying it served as a precedent that would curtail any government attempt to ban religious practice — for instance, circumcision.

Diament started off his praise of Trump administration policies with a cause that he has championed: extending disaster aid to houses of worship.

For years, rules meant to keep federal dollars from going to religious causes kept the Federal Emergency Management Agency from delivering aid to synagogues, churches and other religious institutions.