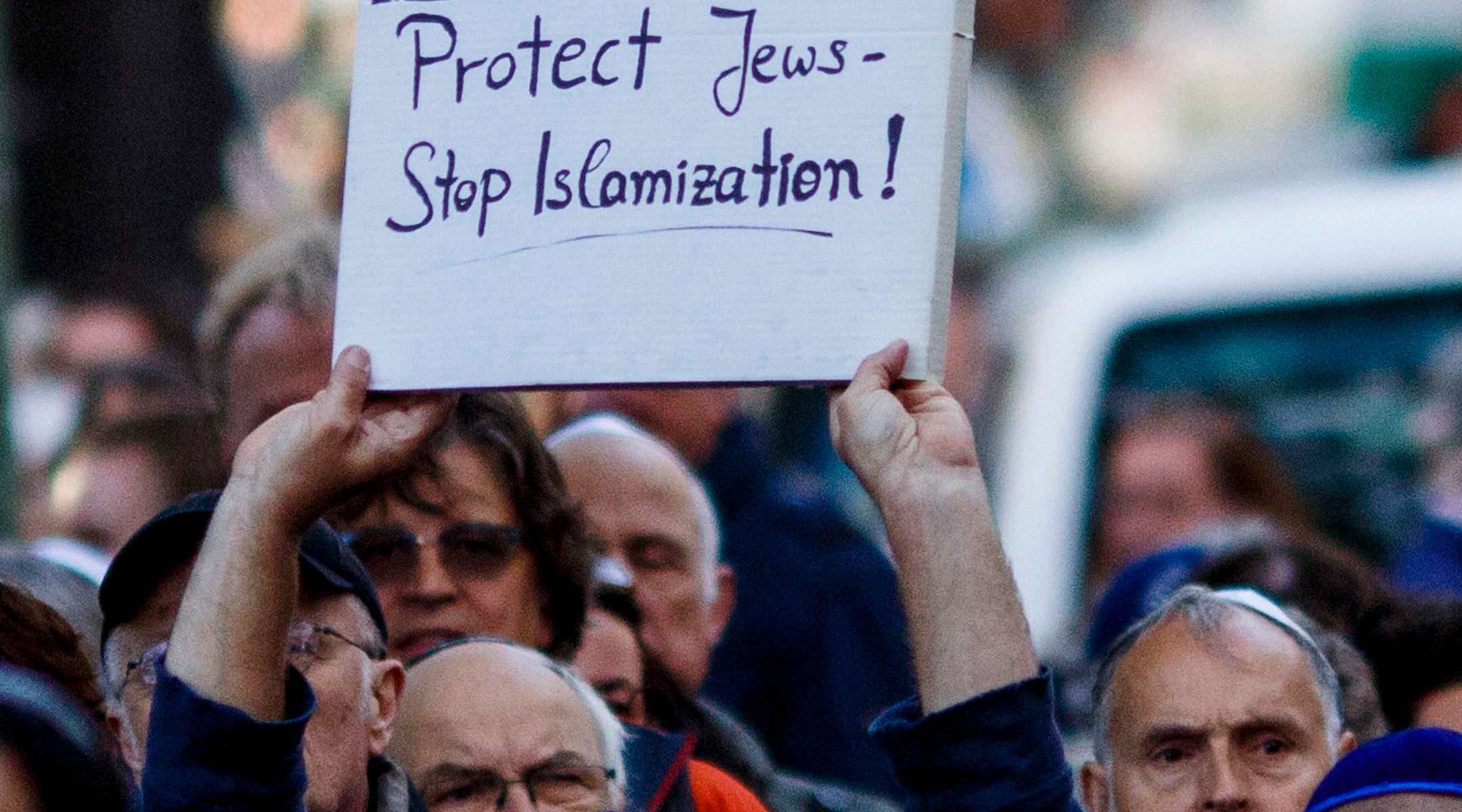 A participant in the "wear a kippah" protest in Berlin holds up a sign, April 25, 2018. The solidarity event was held in response to a Syrian-Palestinian's assault of a man wearing a kippah. (Carsten Koall/Getty Images)
Advertisement

(JTA) — The top intelligence agency in Germany has written what is being called its most comprehensive analysis of rising anti-Semitism by Islamist extremists.

The Federal Office for the Protection of the Constitution, or BfV, described its 40-page brochure as a tool for educators, social workers, police and others who work closely with recent Muslim immigrants or refugees.

Titled “Anti-Semitism in Islamism,” the recently published report represents a leap forward in terms of the agency’s focus on the topic, spokeswoman Angela Pley told the Jewish Telegraphic Agency in a telephone interview.

She said the agency has never published such a comprehensive analysis of the subject based on empirical data.

“We are an early warning system,” Pley said. “Recommendations on what can be done must come from society and the political establishment.”

Pley said there had been no public response to the report by Muslim associations in Germany, but that it had been downloaded 1,439 times since its release.

It is one of a few recent government measures born of increased concern about anti-Semitism in Germany.

In 2018, the government appointed a commissioner, Felix Klein, to focus specifically on the topic. In 2012, a Bundestag commission was established to report on anti-Semitism nationwide and in all categories.

“Anti-Semitism in Islamism” homes in on the Islamist extremist component, which represents a looming threat, the agency said, though relatively few anti-Semitic crimes in Germany have been attributed to Islamist extremism.

The report distinguishes between “Islam” the religion and “Islamism,” which it describes as a form of political extremism that “aims at the partial or complete abolition of the liberal democratic constitution of the Federal Republic of Germany.”

Between 2010 and 2016, the Pew Research Center reported, the number of Muslims living in Germany rose to nearly 5 million, or 6 percent of the population, from 3.3 million, or 4.1 percent.

But the new report, which identifies Islamist organizations and movements and their propaganda, warns that radicalization and incitement to anti-Semitic hate “form the breeding ground for violent escalations.”

It mentions a few sensational cases from recent years:

* In April 2016, a woman in Berlin was approached by two men of Arab descent who asked about the Israel-shaped pendant she was wearing. The men responded: “You f***ing Jews! You are the scum of the earth.”

* In December 2017, a Jewish high school student in Berlin was attacked by an Arab classmate who said “You are child murderers, you should have your heads cut off.”

* That same month, two unknown perpetrators attacked a synagogue in the state of North Rhine-Westphalia and berated the staff, saying “Al-Quds belongs to us! Get out of here, you sons of bitches!” Al-Quds is the Arabic name for the city of Jerusalem.

Anti-Semitic beliefs promoted by Islamist groups and individuals “already represent a considerable challenge for peaceful and tolerant coexistence in Germany,” the report says.

It is not the first time the agency has examined anti-Semitism in this context: Past annual reports on extremist crime have covered Islamism and its anti-Semitic components. A symposium was held on the subject in the early 2000s, Pley told JTA.

Juliane Wetzel, a senior staff member at the Center for Research on Antisemitism at the Technical University in Berlin, called the report an “excellent contribution on the theme.”

“The conclusion is important: Islamist anti-Semitism is spreading in Germany,” said Wetzel, a member of the Bundestag’s commission of experts on anti-Semitism.

The new report is important, though the topic of anti-Semitism in Islamism has hardly been taboo in Germany as some critics have claimed, said political scientist Clemens Heni, director of the Berlin International Center for the Study of Antisemitism.

Among other organizations, “the intelligence agency has reported on it for decades,” Heni told JTA.

In its definition of anti-Semitism, the brochure includes anti-Zionism, since it “aims at the complete elimination of the State of Israel” and falsely defines the Mideast conflict “as a Jewish ‘war of annihilation’ against the Palestinians.”

The brochure says that anti-Zionists in Germany often argue that they are against Israel, not against Jews. But given that “Israel is the only Jewish state in the world and that its annihilation would inevitably result in the death and expulsion of millions of Jews, this argumentation turns out to be a trick to conceal the actual thrust of anti-Zionism,” the report concludes.

Among other points, the brochure covers anti-Semitic stereotypes in Islamism and the rejection of the State of Israel by Islamist organizations.

Its list of Islamic extremist groups and movements in Germany includes the Muslim Brotherhood, Hamas and Hizb Allah, among others.

Though there has been no public response from Muslim organizations in Germany, the Liberal Islamic Association recently published its own 178-page report on the results of its three-year program, Extreme Out: Empowerment, Not Antisemitism. The project was designed to “shed light on and work [against] anti-Semitic attitudes among young people of Muslim faith” and to help youth see themselves as part of German society.