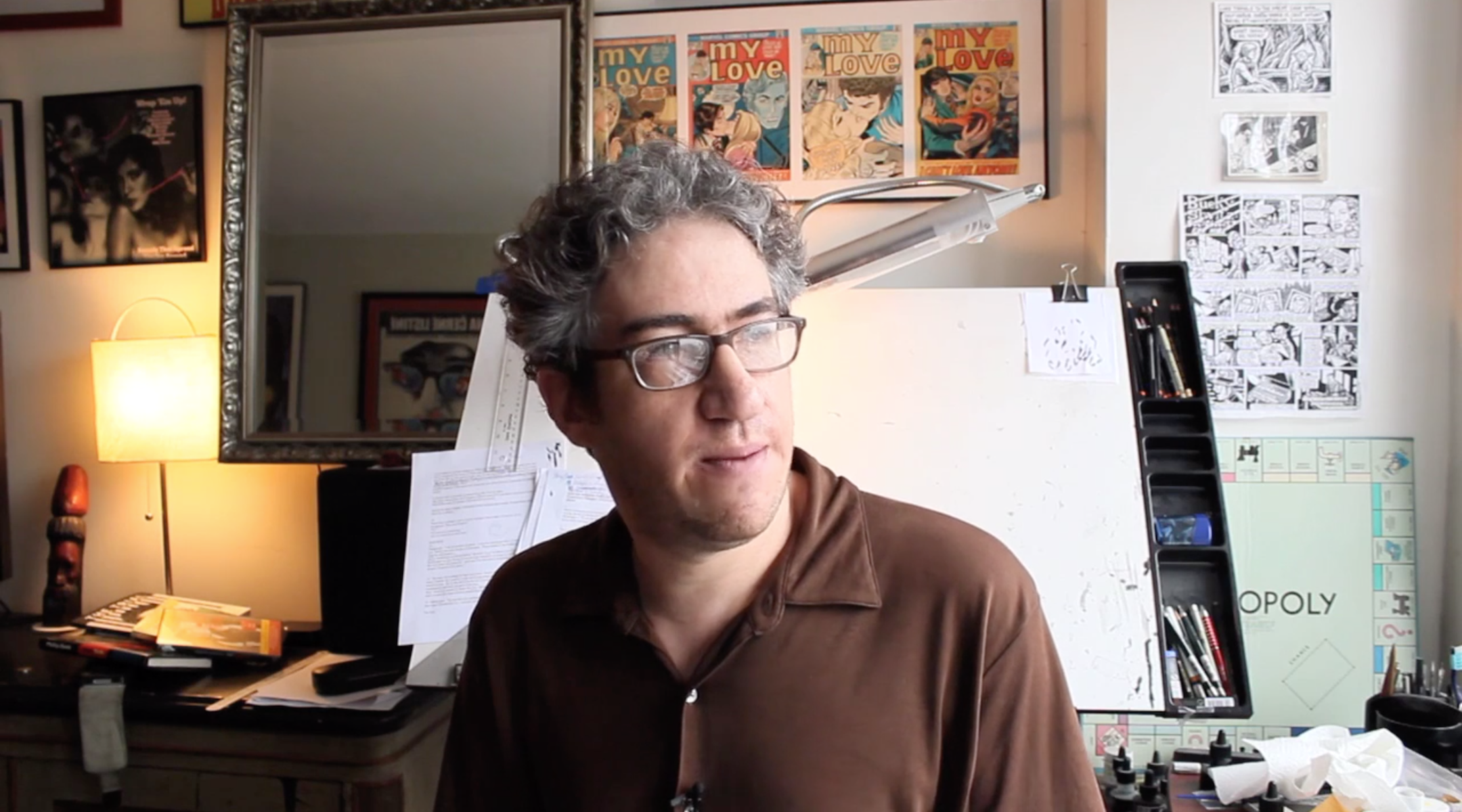 Eli Valley, a Jewish cartoonist whose work has long taken aim at Jewish leaders and institutions, has broadeded his scope during the Trump era. (Screenshot from Vimeo)
Advertisement

NEW YORK (JTA) — Is Eli Valley a brave Jewish artist speaking truth to power at a moment of national crisis? Or is he a self-hating Jew spreading anti-Semitic caricatures and slandering the state of Israel?

Judging by those who’ve stoked the Twitterstorm that’s raged around Valley this week, those seem to be the only two available options.

After a pro-Palestinian group at Stanford University posted flyers about his upcoming appearance as the keynote speaker for Palestine Awareness Week, critics pounced. Bad enough that a Jew would speak at an event sponsored by anti-Zionists, they said, but the cartoons advertising his talk were themselves anti-Semitic in their message and imagery.

Valley dismisses the charge. A Jewish political cartoonist, he has skewered American Jewish leaders — and especially Jewish Republicans — as hypocrites for more than a decade. He’s unsparing in his leftist criticism of Israel and its treatment of Palestinians and what he depicts as the Jewish establishment’s unwavering support of it. A book of his comics, “Diaspora Boy,” was published in 2017.

Since 2015, his pen has stabbed at President Donald Trump, Jared, Ivanka and the people he sees as the administration’s Jewish enablers. His targets include conservative pundit Ben Shapiro, New York Times writers Bari Weiss and Bret Stephens, and, of late, Meghan McCain, the philo-Semitic co-host of “The View.”

Often, those comics — mostly drawn in a ghoulish black and white — employ Nazi imagery satirically. He’s explicit about the point: To him, Trump and his allies are modern-day Nazis, and their Jewish supporters are “worse-than-kapos.” He pointed to Trump retweeting a white nationalist last week and, earlier, a Republican congressman quoting “Mein Kampf” from the floor of the House.

“Trump is a hero of American Nazism,” Valley told the Jewish Telegraphic Agency. “That the GOP is merging with Nazism, merging with anti-Semitism, and merging with virulent Jew-hatred is astonishing.”

He’s dived into that idea in his art: One shows Gary Cohn and Steve Mnuchin, at the time both Jewish Trump appointees, in concentration camp uniforms with the label “Sr. Kapo.” Another shows the Republican Jewish Coalition hoping to “Make America Judenrein,” German for empty of Jews. A third shows Weiss, Stephens and others featured in a “Haggadah for Nazi-Friendly Jews.”

For those on his wavelength, Valley is exposing his Jewish targets as hypocrites, enablers and worse.

To Valley’s critics — including some of the aforementioned targets — he is simply attacking Jews in ways that are indistinguishable from the way they’d be portrayed by an anti-Semite.

What sparked the latest Twitter conflagration is an op-ed in The Stanford Daily, the school’s student newspaper, comparing Valley’s comics to Der Stürmer, the Nazi paper.

Valley is scheduled to speak on campus Friday, co-sponsored by two pro-Palestinian groups, Jewish Voice for Peace and Students for Justice in Palestine, and some of his comics were posted to advertise the event. One featured Shapiro, an Orthodox Jew, justifying the White House’s draconian immigration policies by inverting the messages of the Passover seder.

“For those unfamiliar with Mr. Valley’s work, it ranges from the morally repugnant to ethically disgusting,” wrote Ari Hoffman, a Stanford law student who is Jewish. “Like most hate, it’s remarkably lacking in insight. It is crude and disgusting, and its ceaseless recourse to Nazi imagery is matched only by its slavish devotion to the age-old tropes of Jewish caricature.”

Then Weiss, an editor for The Times’ op-ed page, shared Hoffman’s essay on Twitter and endorsed his assertion that Valley’s work traffics in “hatred that gloms onto Jews and the Jewish State.”

Then the whole thing blew up. Pro-Israel advocates attacked Valley, like the Israel on Campus Coalition, which also compared the art to Der Sturmer.

Linda Sarsour, the Democratic Socialists of America’s unofficial Jewish caucus and a range of other leftists defended him.

Two women also accused some of Valley’s supporters on Twitter of harassing them with sexist obscenities. Writer Ariel Sobel called it the “worst sexual harassment I’ve ever received online,” and progressive activist Naomi Schmahl tweeted screenshots of the harassment, including someone calling her a “kapo b****” and a “c***.” In a reply to Sobel, Valley wrote that the harassment is “inexcusable and obscene.”

Still others accused Weiss and Hoffman of seeking to censor speakers they disagreed with.

Because of the controversy over the op-ed, Valley’s Stanford talk has been limited to students and faculty.

“I’m not going to let bad faith malicious assholes get me down, but it’s disturbing that a smear campaign was spearheaded by a New York Times columnist, and that lies about my work were spread through the ecosphere,” Valley told the Jewish Telegraphic Agency.

He added later that he sees Hoffman’s op-ed as of a piece with right-wing attempts to divert attention from white supremacists.

“Nobody has said I’m a member of the Nazi Party,” he said. “But they’re making flat out connections between my work and Nazis at a time when we’re dealing with a white nationalist horror-show.” 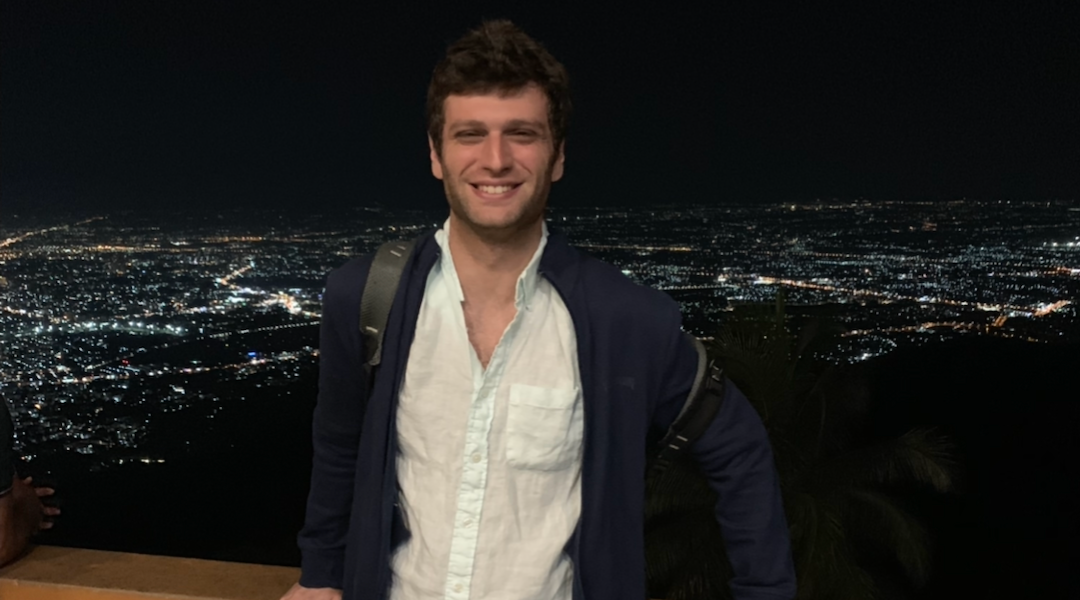 Hoffman stands by the comparison, and said Holocaust imagery can “preclude useful conversation rather than enable it.”

“He has every right to his extraordinarily hostile positions on Israel and certain individual Jews,” he said. “But the use of Holocaust imagery is over the line when it’s tied to a kind of grotesqueness, and it’s used to dehumanize certain Jews with which he has political disagreements. That’s a tactic that is gross and is anti-Semitic.”

Valley agrees that his work is grotesque — and to him that’s precisely the point. He says he’s following a long tradition of grotesque artists and political cartoonists, from Otto Dix after World War I to Mad Magazine. Calling his comics Der Sturmer-esque, he and his supporters say, betrays a lack of knowledge of his discipline.

“When people started calling his art ugly or saying that the ugliness of his art matched the vitriol, he decided to lean into that,” said Miriam Libicki, an Israeli-American graphic novelist living in Canada who has known Valley for more than a decade. “There is definitely a tradition of the grotesque … It’s definitely part of his brand. He doesn’t need to make anything look good.”

For a while, much of Valley’s work was directed toward Jewish communal leaders and organizations, along with the politics of Israel among American Jewry. It’s a world he knew well, as the editor of the Steinhardt Foundation’s now defunct magazine of Jewish ideas, Contact.

Since the 2016 election, he says, he’s widened his lens to the broader political conversation and Trump.

“The major difference between now and then is that my comics have become angrier because of what has happened in this country,” he said. “We’re off the cliff right now and we’re like Wile E. Coyote rapidly moving his legs, hoping he’s not gonna plummet. How can you not be enraged by what’s happening?”

But much of his work still revolves around Jews and Jewish institutions. Hoffman believes that’s damaging to Jews, especially when his images are posted across campus, in a place where people may not understand the Jewish and historical context Valley is referencing.

“Could I see a context in which intra-Jewish conversation is the scene of harsher and more vociferous or even vicious satire and argumentation? Of course,” Hoffman said. “But when these are put up on a campus, co-sponsored by Students for Justice in Palestine and seen by students of all backgrounds, what’s important is not that he’s Jewish but how Jews are depicted in these cartoons.”

Valley sees the bifurcation of the world into Jewish and non-Jewish spheres as a confining separation during a time when urgent action is needed.

“If you’re suggesting that Jewish artists should not engage in critical commentary because some viewers out there might be ignorant of the personalities and issues, what you’re suggesting is self-censorship in favor of the lowest common denominator consumer of art at a time of resurgent fascism throughout the world,” he wrote in an email. “That’s horrifying to me.”

Valley has embraced the invective his art has attracted. The publisher’s web page for “Diaspora Boy” features praise from several publications. Then, at the bottom, there are quotes from longtime Valley critics calling his work “bigoted,” “wretched” and “One of the most antisemitic things I’ve ever seen.”

The author of that last quote? Meghan McCain, in a tweet.