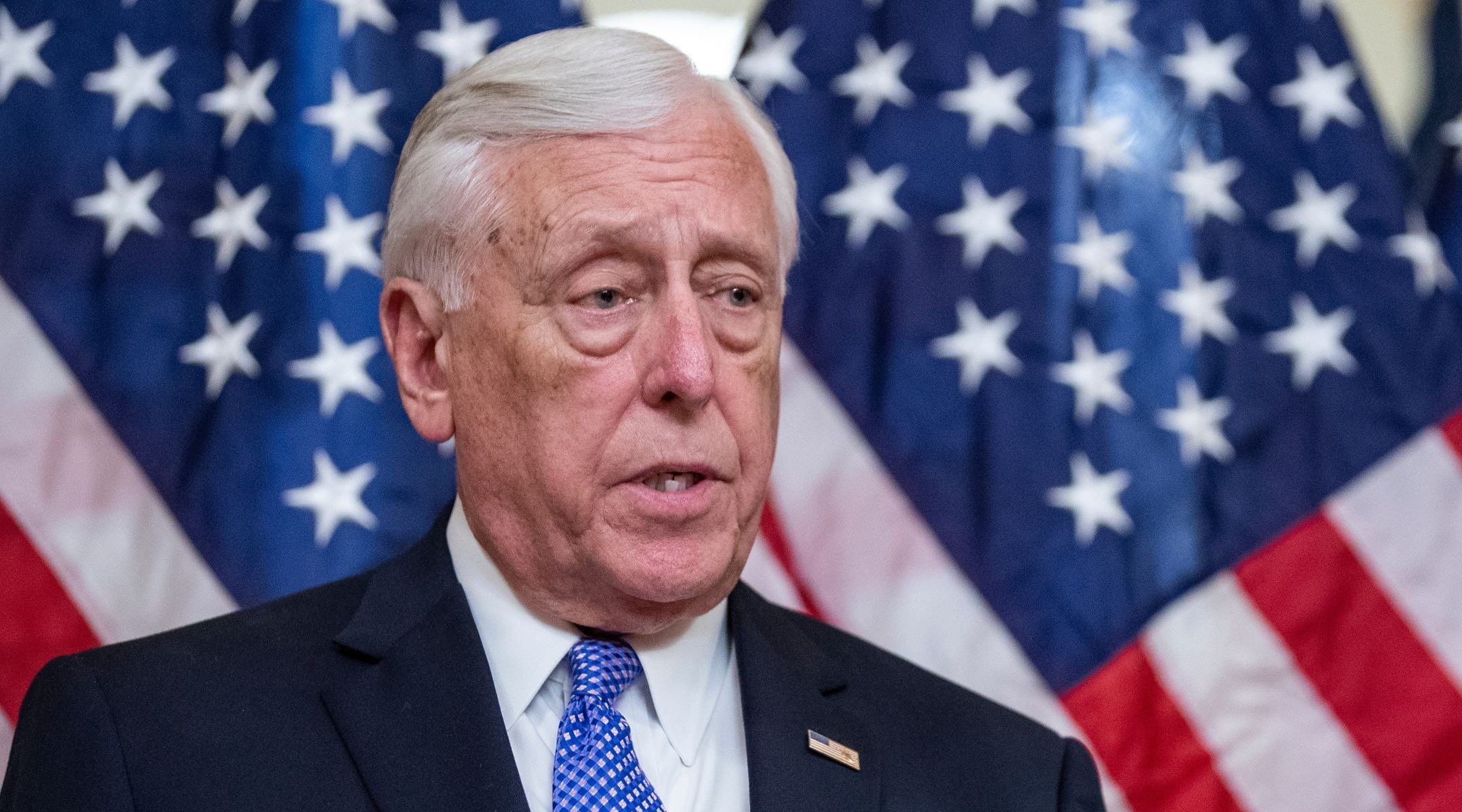 WASHINGTON (JTA) — Steny Hoyer, a pro-Israel stalwart in Congress and the House majority leader, came to the defense of fellow Democratic Rep. Rashida Tlaib, who has come under attack because of her remarks on the Holocaust.

“If you read Rep. @RashidaTlaib’s comments, it is clear that President Trump and Congressional Republicans are taking them out of context,” Hoyer, a longtime Maryland congressman who leads a biennial pro-Israel trip of House colleagues to the country, said on Twitter. “They must stop, and they owe her an apology.”

Hoyer’s defense is significant because he leads the pro-Israel faction in the Democratic Party. He and Tlaib, a Palestinian American, have clashed because she wants to launch a pro-Palestinian tour of the West Bank to compete with the tour he leads, which is sponsored by an affiliate of the American Israel Public Affairs Committee.

If you read Rep. @RashidaTlaib’s comments, it is clear that President Trump and Congressional Republicans are taking them out of context. They must stop, and they owe her an apology.

The controversy started with an interview Tlaib gave to a political podcast, Skullduggery, over the weekend in which the freshman lawmaker from Michigan asserted that Palestinians created a “safe haven” for Jews during the Holocaust.

“There’s always kind of a calming feeling I tell folks when I think of the Holocaust, and the tragedy of the Holocaust, and the fact that it was my ancestors — Palestinians — who lost their land and some lost their lives, their livelihood, their human dignity, their existence in many ways, have been wiped out, and some people’s passports,” she said.  “And just all of it was in the name of trying to create a safe haven for Jews, post-the Holocaust, post-the tragedy and the horrific persecution of Jews across the world at that time. And I love the fact that it was my ancestors that provided that, right, in many ways. But they did it in a way that took their human dignity away and it was forced on them.”

Republicans in Congress have distorted Tlaib’s remarks to suggest that it was the Holocaust itself, and not the subsequent refuge Jews found in Palestine, that soothed Tlaib.

Rep. Liz Cheney, R-Wyo., the third-ranking Republican in the U.S. House of Representatives, writing on Twitter, characterized Tlaib’s remarks this way: “Rashida Tlaib says thinking of the Holocaust provides her a ‘calming feeling.'”

Trump, who in 2017 was faulted for diminishing the Jewish significance of the Holocaust, weighed in on Twitter.

“Democrat Rep. Tlaib is being slammed for her horrible and highly insensitive statement on the Holocaust,” he said. “She obviously has tremendous hatred of Israel and the Jewish people. Can you imagine what would happen if I ever said what she said, and says?”

The Republican Jewish Coalition said, “The only reason to ever take a ‘calming feeling’ from reflections on the Holocaust is out of hatred for the Jewish people.”

Tlaib hit back on Twitter and in a statement. She slammed Cheney “for using the tragedy of the Holocaust in a transparent attempt to score political points.” The statement said Tlaib “did not in any way praise the Holocaust, nor did she say the Holocaust itself brought a calming feeling to her.”

“Policing my words, twisting & turning them to ignite vile attacks on me will not work. All of you who are trying to silence me will fail miserably,” she said. “I will never allow you to take my words out of context to push your racist and hateful agenda. The truth will always win.”

Sanders, the Vermont Independent, said Trump should “[s]top dividing the American people up by their religion, their race or their country of origin — and stop your ugly attacks against Muslim women in Congress. You are taking Rep. @RashidaTlaib’s comments out of context and should apologize.”

The Jewish Democratic Council of America slammed Trump and agreed with Hoyer that “Tlaib’s comments were taken out of context.”

“Trump’s response is the height of hypocrisy,” the group said in a statement. “It requires no imagination — as he’s suggesting — to envision his stoking the flames of anti-Semitism because he’s done just that over the past three years.”

It’s not clear from Tlaib’s remarks whether she means that Palestinians welcomed Jews seeking refuge from Nazi Europe, or that despite the injustices she says were done to the Palestinians, she takes comfort in the idea that Jews fleeing Nazis found refuge in Palestine.

The former interpretation is a historical inaccuracy of gargantuan proportions considering the collaboration that the then-Palestinian leadership offered the Nazis and the nonstop conflict between Jews and Arabs in British Mandate Palestine.

The Jewish Telegraphic Agency is seeking clarification from Tlaib’s office.

While agreeing that the congresswoman’s words were taken out of  context, the Jewish Democratic Council of America did call out Tlaib.

“Her comments represent revisionist history — unfortunately, the Palestinians were not as welcoming of Jews in the aftermath of the Holocaust as she suggests,” its statement said.

“What she is saying here is not very hard to understand: While she regrets the establishment of the state of Israel, it did bring a benefit to Jewish refugees,” he said.

Tlaib has clashed with Jewish Democrats in her party over the boycott Israel movement, which she backs, and for favoring a single binational solution as opposed to Israel remaining a Jewish state. Her remarks on the podcast were in response to a question about her support of a single state.