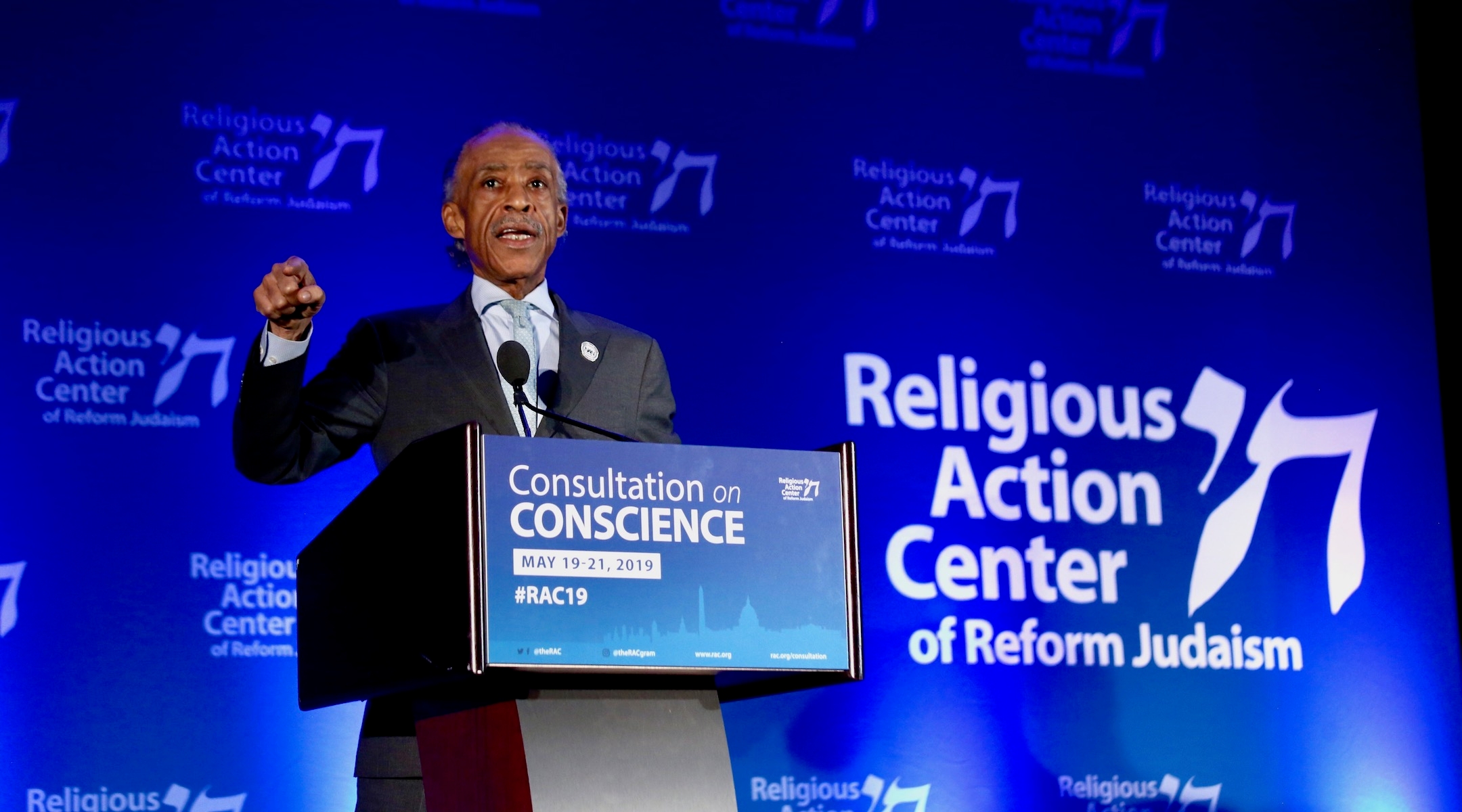 WASHINGTON (JTA) — Al Sharpton appealed to Reform Jews for a united front in facing down anti-Semitism, racism and other forms of bias and acknowledged his role in stoking division, recounting how the Rev. Martin Luther King Jr.’s widow reprimanded him for his “cheap” rhetoric.

The civil rights activist and MSNBC host reportedly has expressed regrets privately to Jewish leaders for the incendiary rhetoric that helped fuel the deadly Crown Heights riots in 1991. But Monday’s remarks here at the Religious Action Center’s Consultation on Conscience were the closest he has come in public in acknowledging his role.

The invitation earned criticism for seeming to rehabilitate a figure at the center of a number of anti-Semitic clashes in the 1990s. After the accidental killing of a black child in Brooklyn by a car driven by a member of the Lubavitcher rebbe’s entourage, African-American protesters targeted religious Jews in the Crown Heights neighborhood.

Yankel Rosenbaum, a graduate student affiliated with Chabad-Lubavitch, was stabbed to death in the rioting.

Sharpton also was accused of inciting the violent firebombing of a Jewish-owned clothing store in Harlem in 1995.

Without mentioning the Crown Heights riots specifically, Sharpton said he could have “done more to heal rather than harm.” And he said that all the public criticism he received paled next to the rebuke from Coretta Scott King, who was known for her closeness to the Jewish community. It appears to be the first time Sharpton has publicly shared the tale. 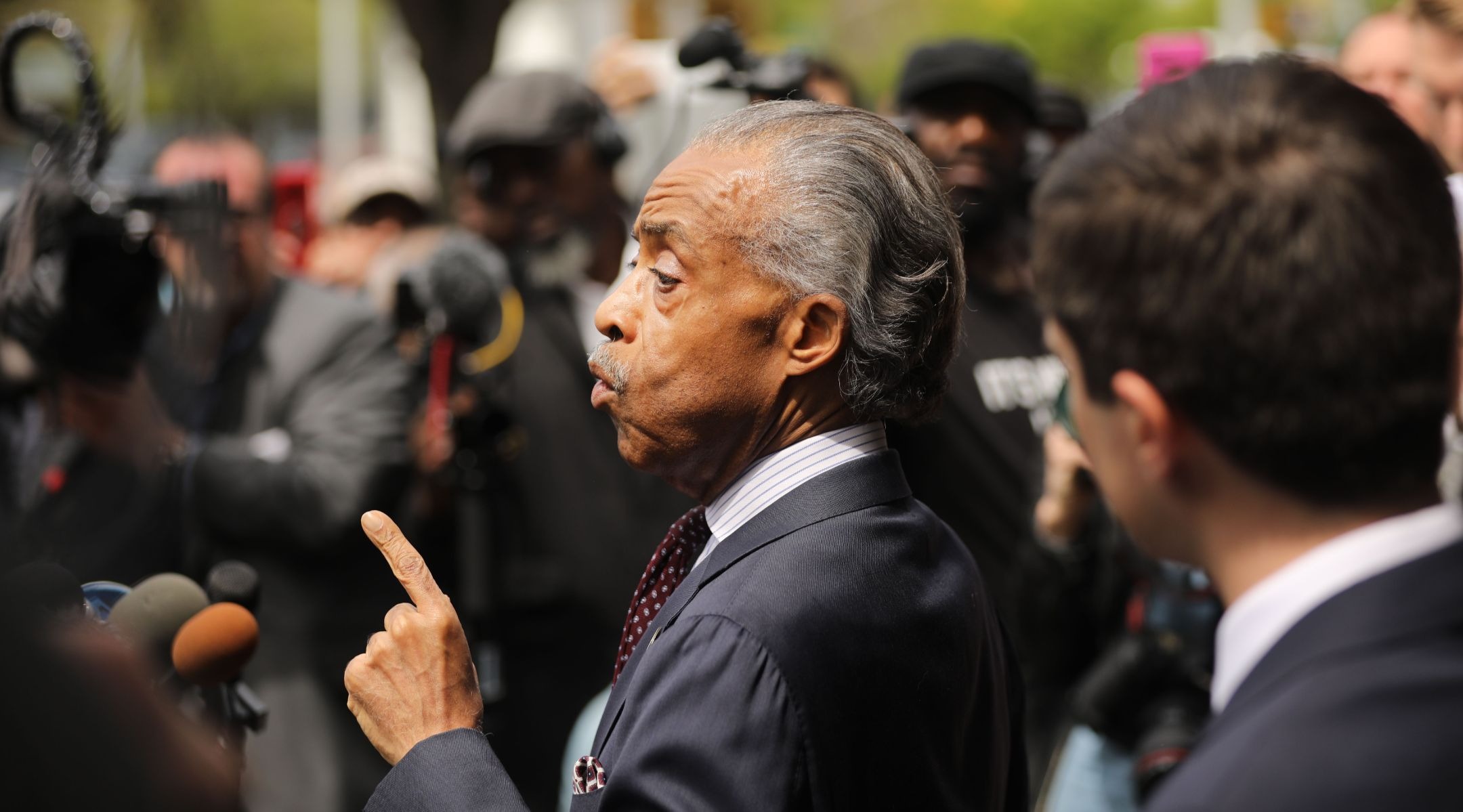 “One of the things she said to me, she said, ‘Al, the purpose of our movement has never been to just get civil rights for us, it’s to protect and stand for civil and human rights for everyone,'” he recalled.

“She said that ‘sometimes you are tempted to speak to the applause of the crowd rather than the heights of the cause, and you will say cheap things to get cheap applause rather than do higher things to raise the nation higher.’

“All of the editorials and the cartoons, and all that have raised various questions in my controversial career, never really impacted me like Mrs. King, who I grew up [with] in that movement, that had a gentle but firm way of correcting some of my excesses.”

Sharpton’s overarching message to the Reform gathering was that blacks and Jews must overcome past differences to confront an increase in bias against all groups, particularly under President Donald Trump. He noted his recent work with the Reform movement exposing U.S. government abuses against migrants on the border, as well as attacks on houses of worship.

“You cannot fight racism without fighting anti-Semitism,” he said.

Referring to white supremacists behind two recent deadly attacks on synagogues, as well as the 2015 mass shooting in a black church in South Carolina, Sharpton said, “Unless we stand up together against this blatant anti-Semitic spirit, then I don’t have the right to stand up when they go into Charleston.”

Rabbi Mordechai Lightstone, who runs social media for Chabad, the movement whose members were principally targeted in the 1991 riots, watched the livestream of the speech and expressed his outrage on Twitter.

“The willingness to wash away our pain is so cruel,” he said. The Religious Action Center “needs to deplatform hate … Not give it a pulpit and whitewash it.”

Lightstone, who with his wife is also director of Tech Tribe, a Chabad center in Brooklyn, was tweeting in his personal capacity as a resident of Crown Heights, he told the Jewish Telegraphic Agency

Rosenbaum’s brother, Norman, wrote in a Washington Examiner op-ed that inviting Sharpton “sends a very dangerous and intolerable message to the anti-Semites among us.”

Rabbi Jonah Pesner, the Religious Action Center director, acknowledged the pain that Sharpton’s appearance must be causing others.

“That there are members of our Crown Heights family and our Chabad family that are in pain over this actually creates a lot of pain for us, and we’re sorry about that,” he said in an interview with JTA.

“At this moment — when children are being separated from their parents at the border, and Jews are being murdered in the synagogues, and people of color are being gunned down in their churches, and people in mosques are being firebombed — we need to stand together, and Reverend Sharpton has stood with us these past couple of years.”

In the same interview, Rabbi Rick Jacobs, the president of the Union for Reform Judaism, said Sharpton’s role as an ally in this moment of increased bias and violence should be factored into understanding why he was invited to speak.