This woman organized a Passover seder for 9 senators at 30,000 feet over Vietnam 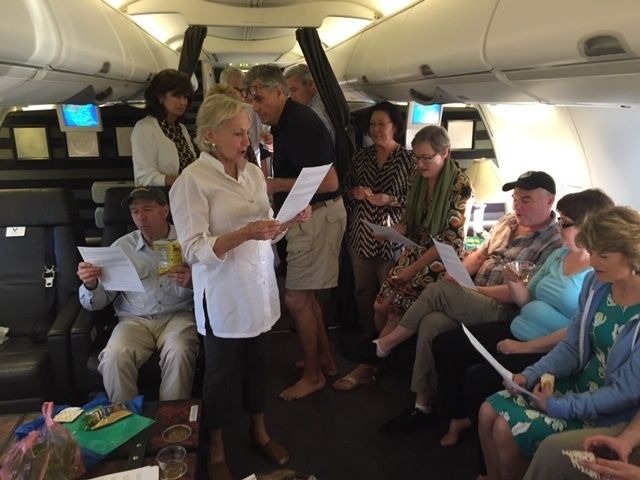 WASHINGTON (JTA) — The Air National Guard pilot gave Jill Cooper Udall the all-clear: There were storm warnings, but she had 10 turbulence-free minutes to get through her seder.

Cooper Udall, who is married to Tom Udall, a Democrat and the senior senator from New Mexico, waved the 25 or so people on the aircraft into the cabin at the plane’s center. Those who could not squeeze in spilled into the aisles leading into the cabin of the plane flying from Hue to Ho Chi Minh City.

Among them were nine senators, from both parties, on a mission to further reconciliation more than 40 years after the end of a war that devastated Vietnam and the United States.

She distributed printouts of the two-page Haggadah (front and back of a single sheet) she had prepared and began reading.

“We gather tonight to celebrate Passover,” Cooper Udall said, “a relatively low-key holiday that reminds us that Jews were once enslaved in Egypt and we are now free.”

The seder, held April 19 en route to Vietnam, was minimalist: Ahead of the trip, Cooper Udall knew her seder time would be limited: The Friday evening flight would clock in at less than 90 minutes.

Why go to the trouble?

She’s an old hand at throwing together seders because most congressional overseas delegations fly during spring break, which often coincides with Passovers. And she loves the holiday.

“I was definitely the only Jewish person on the plane,” Cooper Udall, who attends services at Temple Beth Shalom in Santa Fe, told JTA. “It was important to me to share” Passover. “And that they cared.”

Cooper Udall has found Jewish communities in places like Ireland and Brazil who could host her and her husband, who is a Mormon (“He comes with me on the Jewish holidays”). Vietnam, however, was a problem: They would not be in the vicinity of a Jewish community on Passover eve.

So she figured out the timing (the delegation crossed the international dateline to get to Vietnam, and Cooper Udall wanted to make sure the seder took place on the correct evening) and gathered the materials. Udall didn’t think her 10-minute seder was extraordinary.

Except it was to members of the delegation.

“Every single senator and spouse told me over the next couple of days how meaningful it was to them,” Sen. Patrick Leahy, who has made U.S.-Vietnam reconciliation his mission, told the Jewish Telegraphic Agency. The Vermont Democrat said the event infused the trip with a sense of religious meaning that Leahy said he never experienced on any previous trips to the country.

“It’s been a long time since I remember a weekend like that with a sense of religious togetherness,” he said.

That Sunday there were plans to attend Easter Mass at a cathedral in Saigon, and the entire delegation joined. Sen. Mazie Hirono, D-Hawaii, a Buddhist, organized a meeting with a Buddhist spiritual leader.

“A seder at 30,000 feet over Vietnam in a military jet in storm warnings was a new experience for me,” Sen. Sheldon Whitehouse, D-R.I., told JTA in an email. “We also met Buddhist leader Thich Nhat Hanh and celebrated Easter in Saigon’s Notre Dame Cathedral, so it was a very ecumenical trip.”

The seder brought back memories for Sen. Tim Kaine, D-Va., who was close to the Jewish community in Richmond when he was capital city’s mayor prior to becoming lieutenant governor and governor of the state.

“I missed the neighborhood seder that Anne and I have enjoyed for decades, but loved celebrating with my colleagues,” Kaine said in an email, referring to his wife. “The people of Israel lives!”

The focus of the Vietnam leg (South Korea also was part of the trip) was to advance the reconciliation efforts that Leahy has spearheaded for decades. The senators launched a project that will reclaim lands and support individuals contaminated during the war by Agent Orange and its byproduct, dioxin, Leahy’s office said.

Sen. Debbie Stabenow, D-Mich., told JTA that the seder “was a special moment that brought everyone together to focus on our common humanity and higher purpose.”

Tammy Baldwin of Wisconsin was another Democrat in the delegation. The Republican members were Rob Portman of Ohio and Lisa Murkowski of Alaska.

“The Passover Seder with my colleagues was a really nice moment during a busy, productive trip,” Portman told JTA in an email. “We enjoyed matzah, said a blessing over the wine and reflected on the blessings of freedom. It was a great example of how strong the Passover tradition is.”

Spouses and staff and crew brought the planeload to about 25. Only the two pilots in the cockpit did not participate in the seder, which included matzah from Trader Joe’s and wine sipped from the kinds of cups you’d find in an airplane rest room.

Cooper Udall’s severely abridged seder included responsive readings and two songs: “Go Down Moses” and “Dayenu.” The first would be familiar to a group in which no one else but she was Jewish, Udall said, and “Dayenu” was chosen because — well, she likes it, and it was a concise way of conveying the meaning of Exodus and redemption.

JTA was alerted to the story by Rabbi Jack Moline, who directs the Interfaith Alliance and meets with Sen. Tom Udall periodically in a group organized by the Faith and Politics Institute. Moline, a leading rabbi in the Conservative movement, told Cooper Udall in an email that “you really exemplified the kind of devotion and creativity that has sustained Judaism for centuries.”