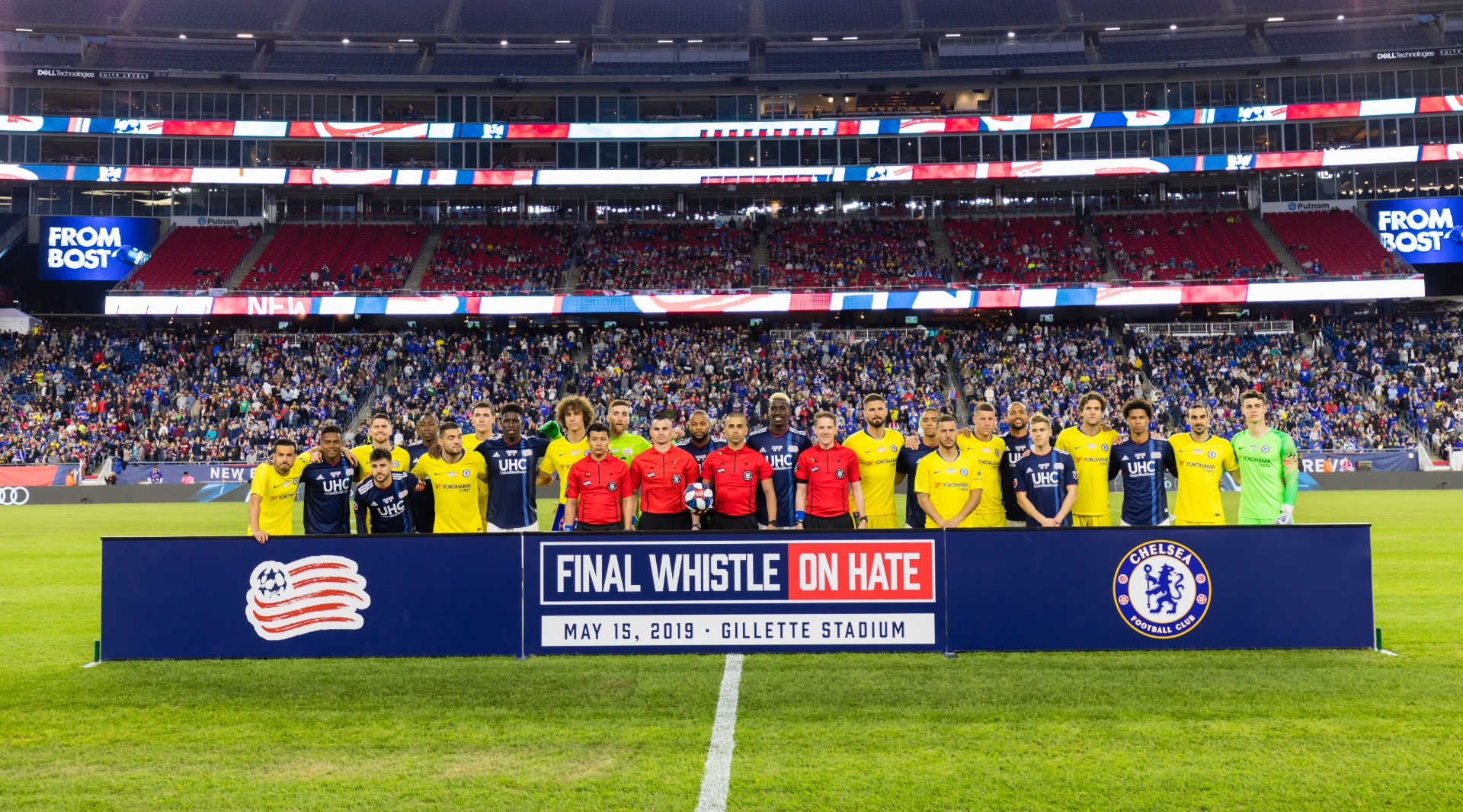 The charity match between the New England Revolution and Chelsea Football Club generated nearly $4 million to combat anti-Semitism and promote tolerance. (Courtesy of the Revolution)
Advertisement

FOXBOROUGH, Mass. — When the New England Revolution and England’s Chelsea Football Club took the field on a chilly evening in mid-May at Gillette Stadium, home of the NFL’s Super Bowl champion Patriots, they weren’t playing just an ordinary soccer game.

The match, which drew 27,000 fans, was part of a unique partnership between the team owners.

Called “Final Whistle On Hate,” their collaboration is aimed at promoting tolerance and fighting anti-Semitism. Between proceeds from ticket sales and a $1 million commitment from each of the owners, the effort has raised nearly $4 million for 15 organizations dedicated to combating hate.

“The power of sport has the ability to bring people together,” said Robert Kraft, owner of Major League Soccer’s Revolution as well as the New England Patriots.

Among the recipients of the funds are the soccer anti-discrimination group Kick it Out, the International March of the Living, the Holocaust Educational Trust, the Anti-Defamation League, the World Jewish Congress and the Tree of Life synagogue in Pittsburgh, where 11 worshippers were killed last October in the deadliest attack ever at a U.S. Jewish institution.

Kraft, a businessman who has gained fame thanks to the remarkable success of the Patriots, was a superstar in philanthropic circles long before he became the National Football League’s highest-profile owner. His giving totals in the hundreds of millions, including to health care, education and the Jewish community in his native Boston, nationally and in Israel.

In January, The Genesis Prize Foundation announced that Kraft would be this year’s recipient of the $1 million Genesis Prize, known as the “Jewish Nobel,” for his outstanding professional achievements, contribution to humanity, and commitment to Jewish values and Israel. Kraft pledged to donate the entire sum to efforts to fight “anti-Semitism, attempts to delegitimize Israel and other forms of prejudices.”

Anti-Semitism remains a pervasive problem at soccer matches across Europe, and Abramovich’s ownership of the Chelsea club has made the world-ranked team a target of anti-Semitic enmity. Last year, Abramovich launched a “Say No to Anti-Semitism” campaign involving educational programs for players, fans and even team staff, including encounters between Holocaust survivors and players, as well as with fans.

When the Patriots visited Pittsburgh for a game shortly after the Tree of Life attack, Kraft went to the synagogue for Shabbat services.

“It was more important that I be there with the people than at the game the next day,” he said.

Following his visit, Kraft reached out to Abramovich — his anti-hate campaign has drawn widespread attention and praise in Europe — to see how the two could team up to fight anti-Semitism.

“We chatted about mutual interests and using sport to build bridges,” Kraft told CNN in a recent interview. “What has gone on in the area of anti-Semitism has been very disturbing for both of us.” 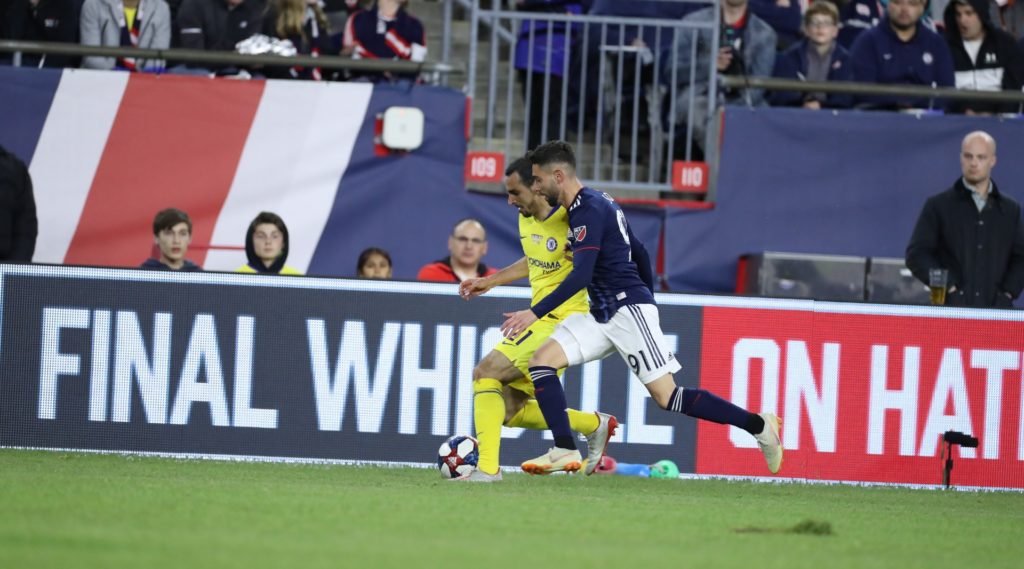 Chelsea and Revolution players vie in a charity match at Gillette Stadium in Foxborough, Mass., May 15, 2019. (Courtesy of the Revolution)

The partnership isn’t just about fundraising. The two owners are also using their teams’ influence and public profiles to promote tolerance and awareness. Players from both teams visited Auschwitz in early May with the March of the Living, a gathering of some 30,000 at the Nazi concentration camp to mark Holocaust Remembrance Day.

“Kraft has spent most of his life advocating for a more just society, tolerance and inclusiveness,” said Stan Polovets, a co-founder and chairman of The Genesis Prize Foundation. “He is one of the world’s most generous philanthropists whose charitable giving reflects the Jewish value of tikkun olam —repairing the world.”

The recipients have redirected their prize winnings toward philanthropic causes of Jewish interest, such as social entrepreneurship based on Jewish values, advancing women’s equality and helping to alleviate the global refugee crisis. Abramovich was a Genesis Prize funding partner both for Douglas’ grants to programs supporting inclusion of intermarried families in Jewish life and Perlman’s support for individuals with special needs.

Last week, before the Final Whistle On Hate match here, the Kraft family hosted community and team leaders and representatives of beneficiary organizations at the John F. Kennedy Presidential Library and Museum for a lunchtime discussion of the problem of hate and anti-Semitism, and the positive role sports can play.

Elan Carr, the U.S. special envoy to monitor and combat anti-Semitism, talked about the global rise of anti-Semitism, the spread of vitriol on social media and the hate being taught to schoolchildren via tainted textbooks in the Middle East.

In the United States, Jews are the leading target of hate crimes, and such crimes against Jews are rising rapidly. In Europe, a recent poll found that 50 percent of respondents blame the Jews for anti-Semitism and 30 percent are unaware of the Holocaust, noted the U.S. Holocaust Memorial Museum’s director, Sara Bloomfield.

Carr said sports has a unique role to play in the fight against anti-Semitism because players’ talents and broad followings give them enormous power to influence others.

Brian Bilello, president of the Revolution, agreed. Fans want more than entertainment, he said, and want their sports heroes to talk about issues that matter.

“You have to use your influence to start to make a difference,” Bilello said.

At the charity match last week, spectators waved Final Whistle On Hate banners, and a Holocaust survivor served as the Revolution’s ceremonial team captain. During halftime, the Jumbotron aired a video chronicling the Revolution-Chelsea delegation visit to Auschwitz. Chelsea won the game, 3-0, behind goals from Ross Barkley and Olivier Giroud.

Elementary schoolteacher Aly Frank said she appreciated the game’s message, especially given the outsize influence sports has on her students.

“When I ask kids who they identify with, it’s athletes,” Frank said. “They say, ‘I play soccer, I play football.’ That’s who they see themselves to be, and so athletes make the best role models of anyone.”