Rachel Wenitsky is the Jewish queen of satire 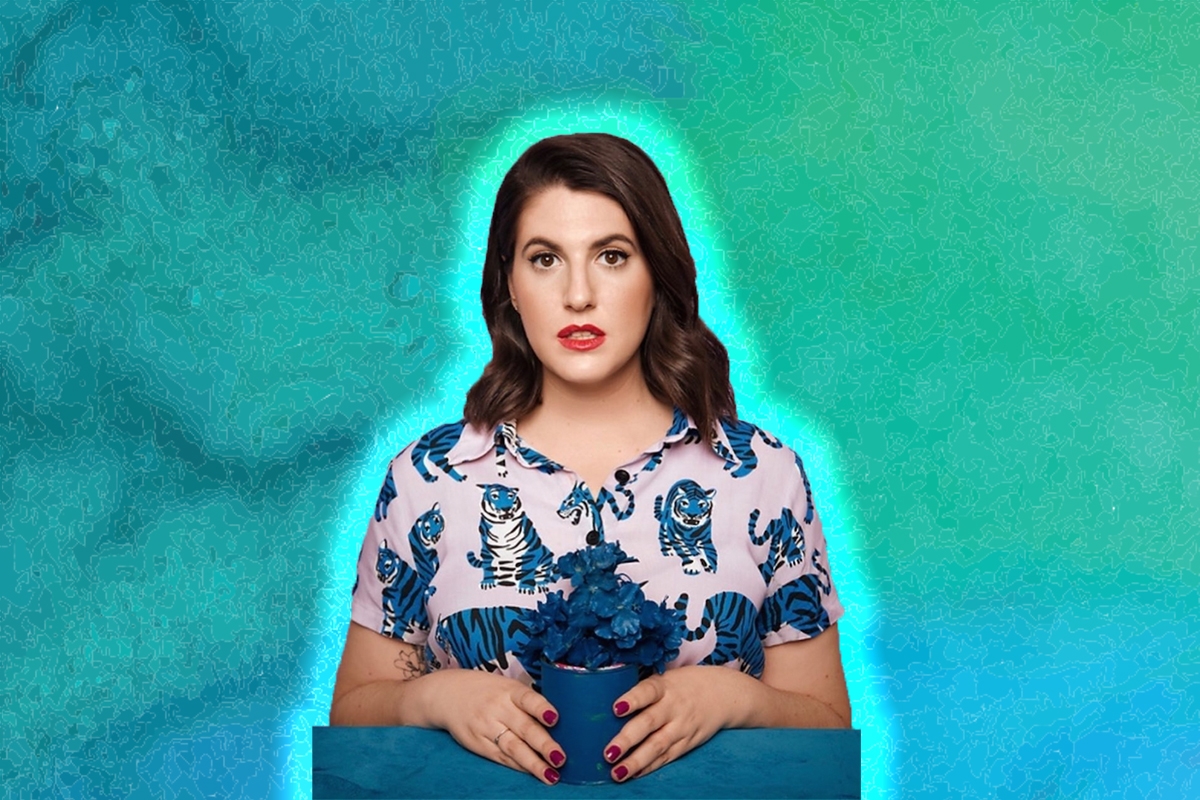 Rachel Wenitsky’s comedy can be categorized by four themes: anxiety, feminism, poop and France. Oh, and buttholes (I promised her I’d include that one).

Since her breakout role as Dorothy in “The Wizard of Oz” in high school, the Jewish comedian has conquered all creative mediums. She’s half of the talented quirky comedy folk duo Friends Who Folk, the head writer for Gimlet Media’s Story Pirates podcast and former deputy editor (and podcast host) of Reductress, everyone’s favorite satirical women’s website. She’s dabbled in improv, musical sketch groups and even snags the occasional television role.

But, subjectively speaking, the 30-year-old’s — “spiritually almost 29” — best work of art is her Twitter account. Wenitsky first caught my eye in February with a 27-second clip that made me howl with laughter. The viral video jabs at men who capitalize on feminism, and it’s just one of the many gems sprinkled in her feed. Whether she’s making fun of her Jewish mother, men’s fashion or “hot” women dancing, Wenitsky’s satirical shorts are always relevant, always relatable and always hysterical.

I caught up with Wenitsky over the phone to talk about the inspiration behind her golden videos, how Judaism has influenced her comedy and that time she made her bat mitzvah Torah reading a pop diva concert.

You’ve conquered basically all of the creative mediums. You sing, act, podcast and write. Is there one you’re drawn to most?

Oh my God. What if I was like, born wanting to be a podcaster? I think that I enjoy doing all of the above, and I love that. We’re living in a world where you can do everything and you don’t have to choose, but I love singing. I love music, and I think that no matter what I’m doing, I can always find a way to bring music into it. Somehow I just can’t ever get away from my musical theater background. I was in “The Wizard of Oz” my senior year of high school and I will be coming down from that peak for the rest of my life.

My office is obsessed with the video short on Twitter where you “get in on the fun trend” of a female character making a joke about respecting women in order to be flirty. Was it inspired by a particular character?

Ah, well, you know, it’s kind of a controversial video. I posted it because I had seen a bunch of TV shows and movies in a row where it felt like there was this reaction to the feminist movement. There’s this kind of capitalism of feminism, where writers were really trying to put in these new characters that were facilitating the trope of women in movies and TV that we’ve seen for so many years, but then they were freaking out that people were going to call them out for not writing three-dimensional female characters, so they were giving them some feminist dialogue to fill the gaps. But the dialogue was often really reductive and not really saying anything.

Have noticed a trend in movies & TV where a female character makes a joke about respecting women to be…flirty?? Wanted to get in on the fun trend! 💖 pic.twitter.com/0iHhOXdrJ6

I saw this over and over again, and then there was a pretty big example of it in the “Spider Man Homecoming” trailer, so I made that video, which in hindsight was probably too close to the “Spider Man” trailer because a lot of Zendaya fans started coming at me on Twitter, calling me out as if she had written the script. It was pretty scary because I love Zendaya and I’m a huge fan. I love Marvel movies, I love superhero movies. It wasn’t a call-out of any of the women involved in any of those movies. It was just this trope I was seeing over and over again, these sort of one-dimensional characters that they’ll give these lines to that are like, “You’re just saying that to get in my pants,” and then they go, “Just kidding! I’m so flirty.” It just feels very male gaze-y. So that’s what I was commenting on. It’s just a lazy way to make a character.

On a Sunday night during “Game of Thrones” you dropped, “Hey Did You Hear You Died?” Tell me about the inspiration behind it.

That was inspired by everybody in my family. Truly. It came from a particular conversation at my family’s Passover seder. Everyone was going around and doing a rundown of who had died.

Sunday night during Game of Thrones is the perfect time to debut this new film inspired by every Jewish mother called "Hey Did You Hear Who Died?" It cost 100 billion dollars (GOT budget) to get my hair to curl without frizz. pic.twitter.com/d40lEUVVwr

Oh, so classic! My mom does it, my grandma does it, my aunts do it. Everyone does it. And I do think it is a very Jewish thing. I feel like Jewish people have a close relationship with death and a morbid fascination with it. Maybe it’s because we’ve been in so many situations where so many of us were dying and we wanted to remember and keep track of them, and then it becomes part of the gossip mill. But it is truly a discussion at every meal, and at every holiday. But then people were responding to the video like, “This is my Welsh Catholic uncle” and “This is my Puerto Rican grandmother,” so maybe it’s just a universal experience that we’re all obsessed with death and dying. But at every Jewish holiday we’re like, this terrible, terrible thing happened to us and we’re not going to let it go, even if it happened thousands of years ago. And now we’re going to eat.

Is the song you wrote, “Everyone At This Party Is Mad at Me,” inspired by yourself?

No, I’m actually perfect. I have no anxiety and I’m incredible in social situations.

Yes, 100 percent it was inspired by me. I feel like everybody has a little bit of anxiety in social settings. I am really interested in how that anxiety manifests when you’re around people who love you very much and people who you shouldn’t be anxious around. I think it’s very relatable. Like, having dinner with one of my best friends and then the next day, or that night, I’ll be like, “Oh God, I said all the wrong things.” And this is like, my best friend! It’s that type of anxiety that is so relatable, but it’s such a waste of time in so many ways.

This film is a song & it is also a DRAMA about my anxiety in social situations & it is called “Everyone At This Party Is Mad At Me.” It cost me 500 billion dollars to learn how to play the guitar this badly. pic.twitter.com/6MvhnQWu1A

Was writing it cathartic for your anxiety?

I think so. But even more than that, what I like about writing personal stuff and putting it out on the internet — which, the internet can be such a cesspool — is that you can put it on Twitter, and so many people are like, “I feel the exact same way!” and “This is me” and “I can relate to this!” and that can feel really nice. You know, just reaching out to people and collectively being like, “This is also my experience!” is a good thing, and a positive about the internet.

You’re the head writer of Story Pirates, a Gimlet Media podcast for kids. What have you learned since making content for kids, and what’s it been like?

Story Pirates has pretty much been the thing I turn to if I’m feeling down about what I’m doing. It’s just something I can always return to if I feel like I’ve gotten too big of an ego or if I’m being too selfish. It’s purely joyful, and about other people, not about myself. So everything we do is based on an idea that was submitted by a kid, and since working there over the past eight years I’ve learned that kids are so much funnier than adults are. I could never come up with something as funny as what these kids send us every day.

How has Judaism — if at all — influenced your comedy?

Great question. You know, I think about this a lot because I love being Jewish, and I’m not religious. I was raised in a very traditional, Reform family. I had a bat mitzvah —

Wait. What was your theme?

It was “Rachel’s Starry Night.”

LOL, interestingly enough, no. I didn’t pick my theme, I wasn’t like obsessed with “Starry Night” when I was a kid. It was a theme that was chosen by a designer who put together the decorations for my party. I was going through a period of my life where I actually did feel a little more religious, insofar as I was like, “I’m primarily excited about my haftarah and my Torah portion, and that party can be up to you.” I think I was mostly doing that because I didn’t really have any friends and I didn’t want to get too excited. It was spring break and like 50 percent of the kids couldn’t go, so I was like, “I’m just going to focus a lot on like, singing as many rifts as possible in my Torah portion, and just really making this a pop diva concert.”

Amazing. OK, back to comedy and your Jewish identity.

So I’m not really religious, but I love being Jewish. I love the traditions of Judaism. I feel like we are a diasporic people, and we’re so scattered, and we’ve been forced out of so many places for so many thousands of years that, you know, my ties to my ancestors are through religious customs. I love going home for the holidays, and I love openly and very strongly identifying as Jewish. And because of that, everything I’ve ever done is funneled through that prism. I grew up being shown the Marx Brothers and Gilda Radner, and there were a lot of Jewish comedians that were really influential to me. I am the result of all of those influences.

I also think because of how depressing so much of our history has been, comedy has always been so important within Judaism, and I think that also has fed my instincts.

What would you tell a Jewish girl reading this interview right now?

Hmmm, let me gather my thoughts so I don’t sound like a dum-dum. I’ve just always been inspired by people who are really open about their identity and about Jewish issues. And I think that right now especially, we’re seeing a rise of anti-Semitism and it can feel very scary. I think all the time about the whole Jewish community, and I hope that all of us are using our positions of privilege to lift up other voices and help out marginalized groups and keep fighting the good fight.