Most American Jews are concerned about anti-Semitism and disapprove of Trump, survey finds 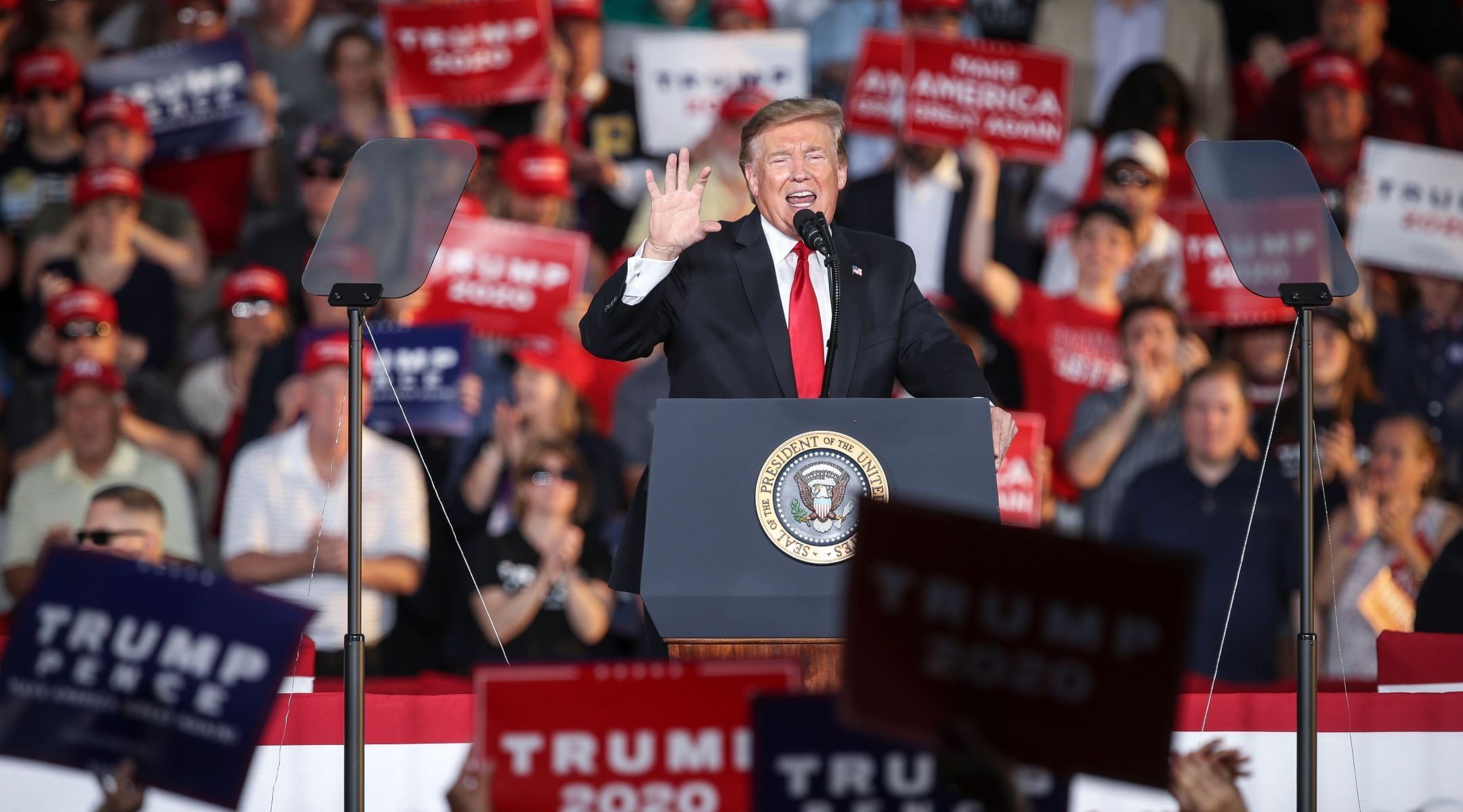 The survey, conducted for a liberal-leaning Jewish organization, the Jewish Electorate Institute, by Greenberg Research, which does polling for Democratic candidates, showed 71 percent of likely Jewish-American voters disapprove of Trump and 29 percent approve, commensurate with polling since Trump’s election.

A generic Democrat would score 67 percent of the Jewish vote in the presidential election, while Trump would get 23 percent.

The pollster asked respondents about only two Democrats running for the party’s presidential nomination, Sen. Bernie Sanders of Vermont and former Vice President Joe Biden, who are leading in the national polls. Biden performed considerably better than Sanders, who is Jewish, although both men bested Trump. Biden’s favorable/unfavorable score was 66/29 and Sanders, who is running well to the left of Biden, was 51/43.

The poll showed Israeli Prime Minister Benjamin Netanyahu’s favorable/unfavorable score as 45/38. Netanyahu used to score high approval among American Jews, but his sustained clashes with Obama on Palestinian and Iran policy, and his closeness to Trump appear to have eroded American Jewish support.

On issues, the only area where Trump earned positive marks was on relations with Israel, with 55 percent approving of his handling of the U.S.-Israel relationship and 45 percent disapproving. Trump has forged a close relationship with Netanyahu, moving the U.S. Embassy to Jerusalem, recognizing Israel’s claim to the Golan Heights, pulling out of the Iran nuclear deal and distancing the United States from the Palestinians. The survey showed that a substantial majority of Jewish voters, 64 percent, disapproved of Trump pulling out of the Iran deal, while 36 percent approved.

Trump fared poorly on a range of other issues, including abortion (60 unfavorable/40 favorable), immigration (67 unfavorable/33 favorable) and health care (69 unfavorable/31 favorable). Notably, his score on dealing with anti-Semitism was 71 percent unfavorable and 29 percent favorable. Trump has downplayed the threat of white supremacists, even after an alleged white supremacist carried out the worst attack on Jews in U.S. history, in October at a Pittsburgh synagogue, and has been seen as equivocating in condemning the far right.

Jewish Democrats said the survey validated their concerns about Trump.

“American Jews vote their values and strongly disapprove of President Trump’s handling of nearly every issue, especially immigration and combating anti-Semitism,” Halie Soifer, the executive director of the Jewish Democratic Council of America, said in a statement.

“The Jewish numbers for Trump are a floor and generic Dem numbers are a ceiling,” Brooks said on Twitter. “No one who now says they’re for Trump are going to change their minds. He will get a higher share of the Jewish vote than this.”

Asked about voting booth priorities, the highest score went to protecting social safety net programs like Medicare and Social Security, with 58 percent of respondents listing it as “one of the most important.” Combating anti-Semitism scored next highest at 54 percent. Third was affordable health care at 53 percent, and after that, gun safety laws came in at 50 percent, combating white supremacists at 49 percent, and combating terrorism at 47 percent. “Whether the candidate supports Israel” was among the lowest, with 28 percent saying it was “one of the most important” issues.

“Interviews were conducted online through a randomly selected panel,” the pollster said, referring to a process in which voters who have previously indicated a willingness to participate in surveys are randomly selected for email solicitations to join in a survey. The system is becoming more popular because of the increased difficulty in recent decades of reaching respondents over landlines. The poll had a margin of error of 3.2 percentage points.

The Jewish Electorate Institute describes itself as “dedicated to deepening the public’s understanding of Jewish American participation in our democracy.” Its board consists of figures who have been prominent in the Jewish organizational world and in Democratic politics.