This Jewish guide found healing in the wilderness. Now he’s helping others. 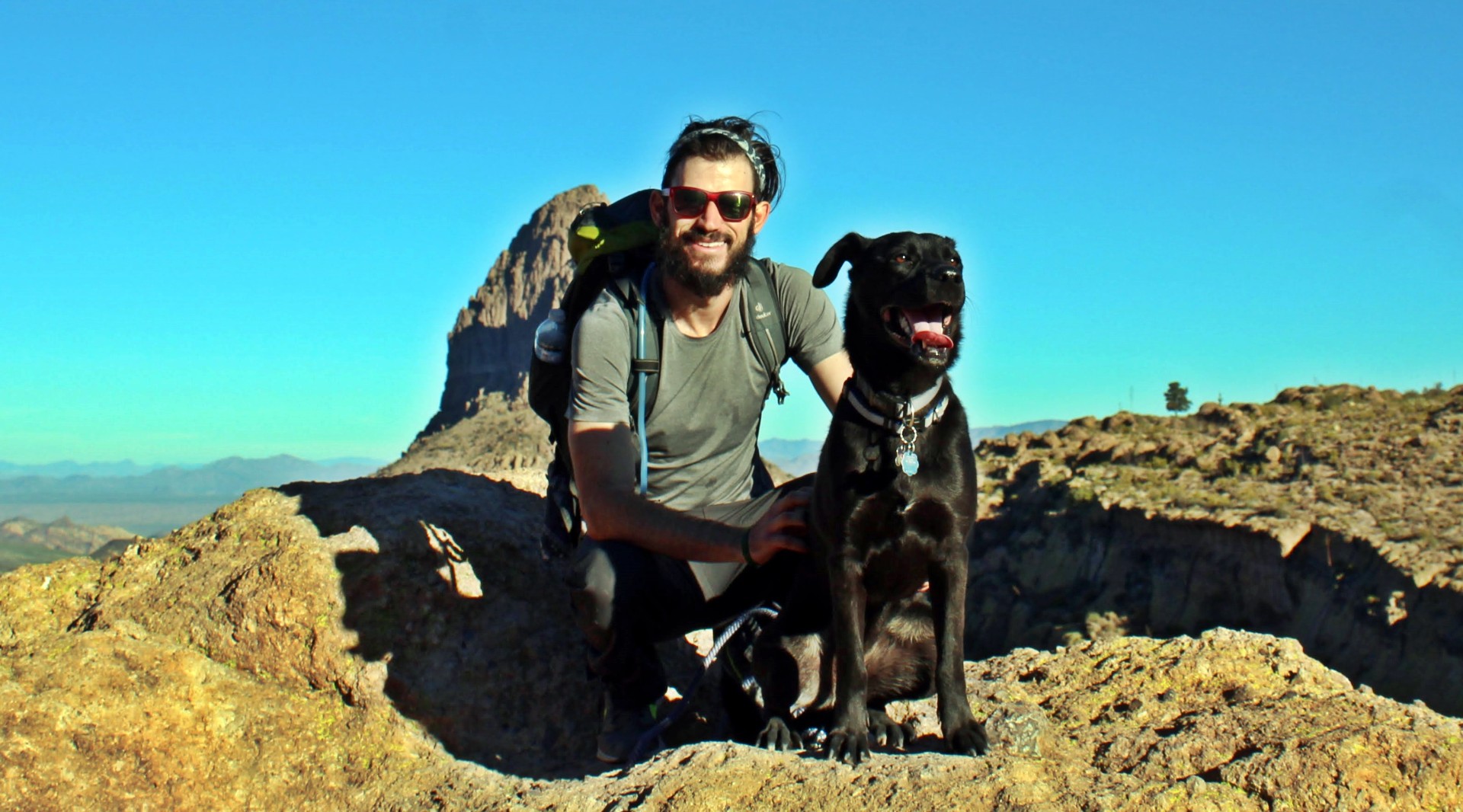 After struggling with depression and social isolation as a teen, Zack Slavkin went on a wilderness therapy program that changed his life, spurring his work to help heal others. (Courtesy of Slavkin)
Advertisement

In January 2011, Zack Slavkin traveled to a secluded property in northern Vermont, deposited everything he had into a locked closet and rode a snowmobile deep into the snowy wilderness.

For most of the next two months, Slavkin lived in a canvas tent in the woods with a pair of guides and only a handful of other people. The 18-year-old cooked his own meals, hiked daily through the snow and kept warm by the heat of a wood stove. He also worked through an intensive curriculum designed to help him cope with the depression and social isolation that had nearly led him to take his own life.

“I think it was a combination of gaining the knowledge and confidence to accept that my depression was part of me and going to continue to be, and giving me the tools and the know-how to get through it,” Slavkin recalled. “It didn’t make all the problems go away. But it gave me the confidence to go forward knowing that I had the tools to get out of those dark places.”

Now 26, Slavkin is helping troubled young people with backstories like his own as a field guide with BaMidbar Wilderness Therapy, the only Jewish wilderness therapy program in the country. Housed at the Ramah in the Rockies ranch, a Jewish adventure camp some 90 minutes southwest of Denver, the initiative for 18- to 26-year-olds launched last year. Sixteen people have completed the individualized programs.

The idea is to develop skills like Slavkin did in Vermont, except within a Jewish context.

“In this type of environment, there’s no BS,” said Jory Hanselman, BaMidbar’s director. “It’s impossible to fake it. So you have to be unbelievably authentic and genuine and able to bring your whole self to the experience. Someone with a lived experience of wilderness therapy can support students in deeper ways than someone who hasn’t had that experience because they have been on that road themselves.” 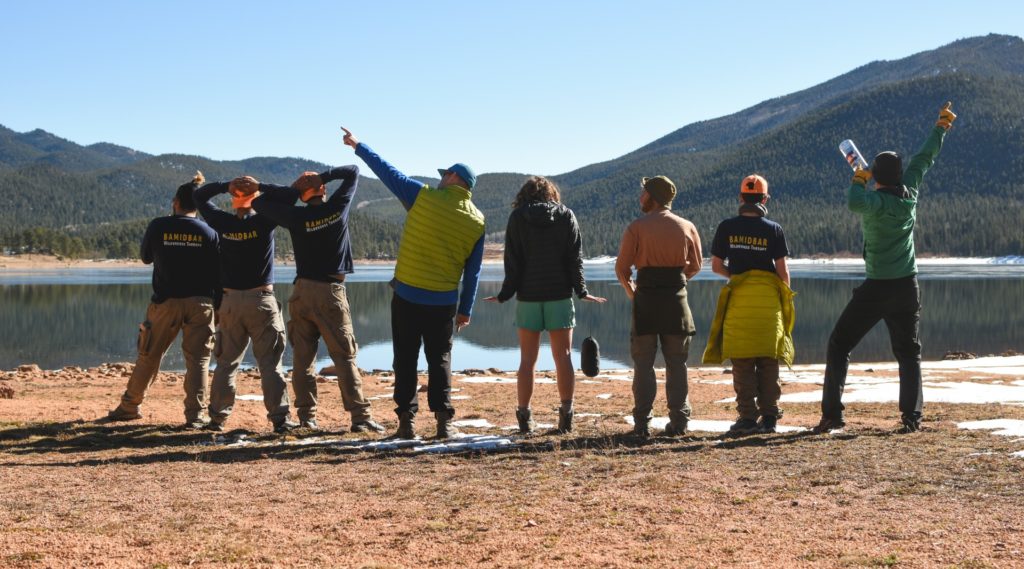 Participants in BaMidbar sleep in tents and go on extended excursions in the mountains of central Colorado as part of a program that combines the development of wilderness skills with emotional therapy. (Courtesy of BaMidbar)

As a child, Slavkin never imagined he would pursue a career as a wilderness guide as an adult. Indeed, he nearly didn’t make it to adulthood.

The trouble began after he transferred from a small Jewish day school in Southern California to a much larger public middle school. Slavkin said he fell in with a bad group of kids and was regularly getting into trouble at school.

“It was just kind of around that time that he started doing what we were calling ‘bonehead’ things,” said Slavkin’s mother, Ann. “He was a good kid. But he was doing these isolated things that seemed, in retrospect, like he was trying to say something.”

After the police came to their home because Slavkin had come into possession of a stolen cellphone, his parents sent him to military school for a year. Slavkin did well within the school’s rigid structure. But the following year, when his family moved to Colorado, he found himself back in public school and struggling again.

Slavkin was in an unhealthy relationship with a girl who was saddled with her own mental health issues, which sapped his energy. He had difficulty making friends and keeping up with his schoolwork.

Toward the end of his sophomore year, the pressure was mounting. With final exams looming and feeling deeply unprepared, Slavkin went into a basement closet and contemplated suicide. His parents found him and brought him to a hospital, where they discovered he had been cutting himself.

“It just felt like the only option was to leave it all, to abandon ship and say I tried and it’s too much for me,” Slavkin said.

For the next two years, Slavkin saw a succession of therapists and took medications daily, but nothing brought relief. Through a family friend he learned about True North, a wilderness therapy program located in Vermont’s Mad River Valley. 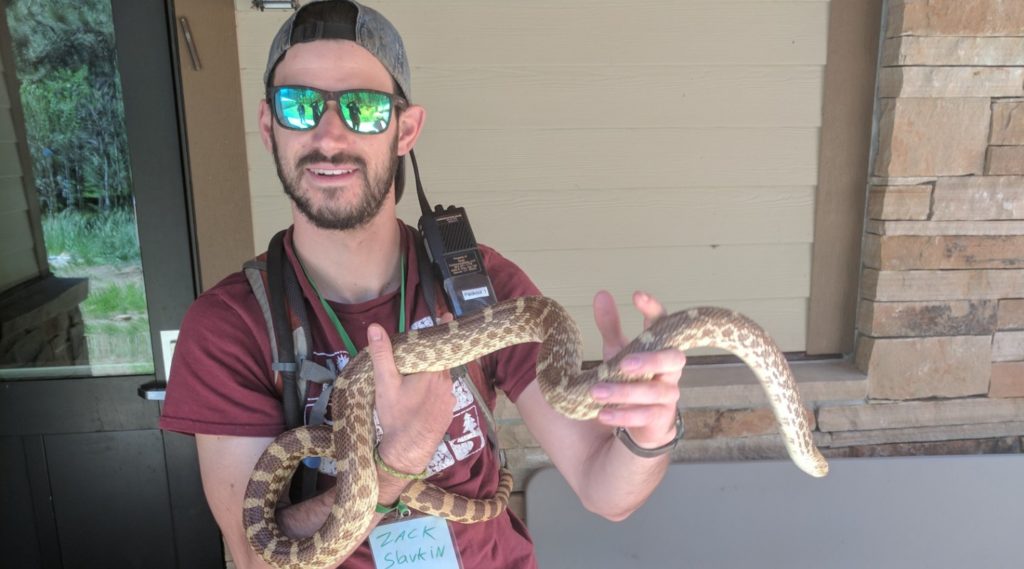 As lead field guide at BaMidbar, Zack Slavkin spends days at a time with students in the harsh mountain conditions of central Colorado, helping teens and young adults cope with their struggles. (Courtesy of Slavkin)

Slavkin was excited for the challenge, which combined learning “hard skills” like fire making and orienteering with a therapeutic curriculum focused on personal reflection. But it wasn’t easy living out in the woods through the frigid Vermont winter. At one point he found himself bedridden for four days with a severe stomach bug that nearly forced him from the program.`

Yet Slavkin made it through, acquiring along the way not just the tools to cope with his illness, but a set of wilderness survival skills that would reset the course of his life.

Over the next six years, Slavkin began spending his summers at Camp Ramah, first as a bunk counselor and later as organizer of trips. Located miles from the nearest paved road and lacking electricity or indoor plumbing, Ramah in the Rockies has a wilderness vibe.

When the camp launched BaMidbar in January 2018, Slavkin was eager to jump on board.

Like True North, participants in BaMidbar sleep in tents and go on extended excursions in the surrounding mountains. The program combines the development of primitive skills with a therapeutic component overseen by licensed therapists.

But it also integrates a significant dose of Jewish spirituality, including daily prayer focused on mindfulness and meditation, and uses biblical stories as a means to bring Jewish wisdom to bear on the challenges facing participants in their lives. Each week, the group returns to Ramah to celebrate Shabbat.

Slavkin is BaMidbar’s lead field guide, overseeing the work of two other guides and spending days at a time with students in the harsh mountain conditions of central Colorado. His own experience, he says, has afforded him a powerful means to connect with teens facing their own struggles.

“It’s the reason I do this. It’s what drives me and brings me fulfillment,” Slavkin said. “Being able to use my story as a place of connection — particularly for young men who feel shame like I did about their struggles, who feel embarrassed, who feel they need to prove themselves and feel macho and not admit to these faults — has been a powerful tool for me to show them it’s OK to struggle and be imperfect.”