Undone by Brexit, Theresa May is still a ‘true friend’ to Britain’s Jews 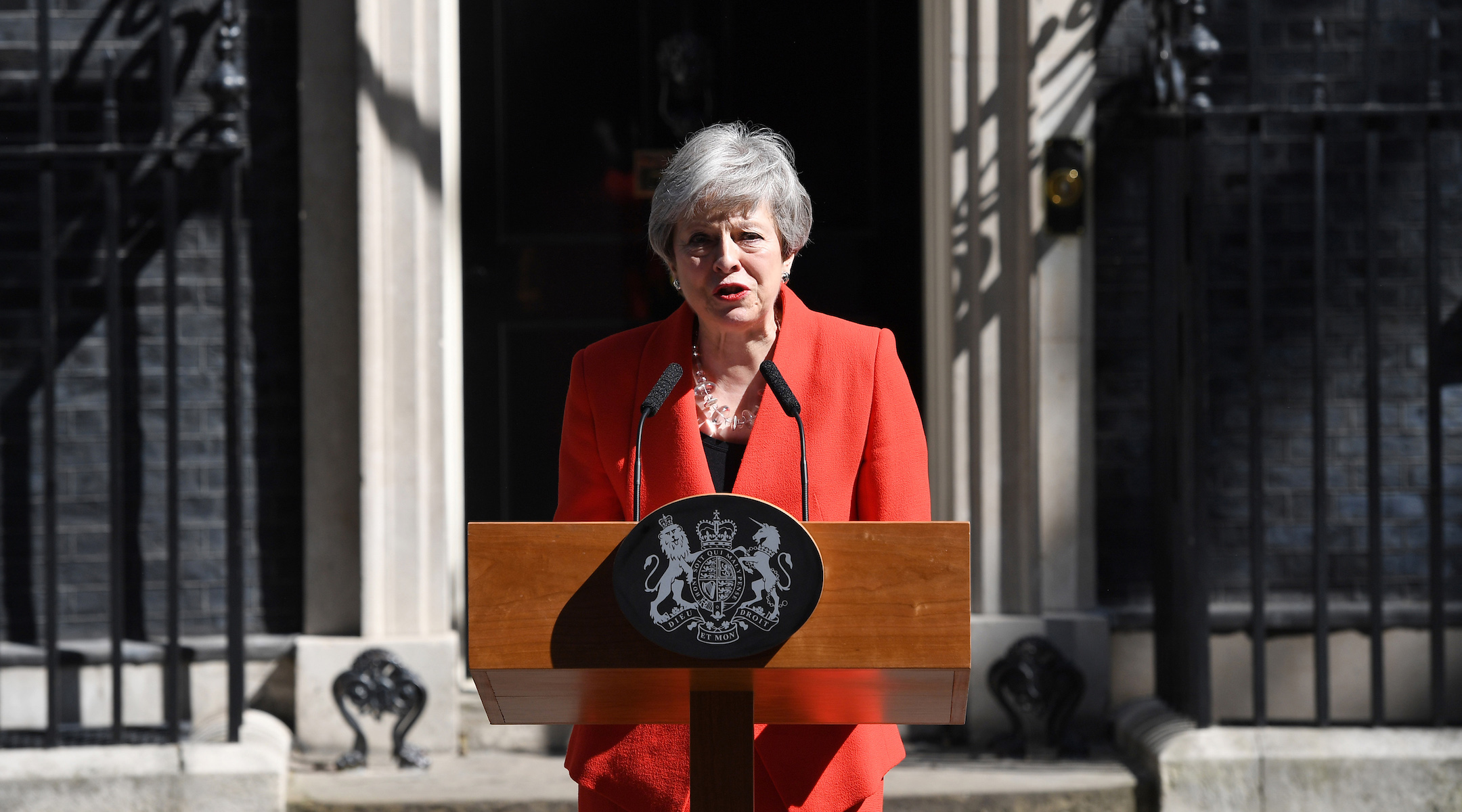 (JTA) — Theresa May, who announced her resignation on Friday as the prime minister of the United Kingdom, will be remembered as one of her country’s shortest-serving and least popular leaders.

Blamed by supporters of Britain’s departure from the European Union for delivering what they consider half measures, she was loathed also by opponents of that plan for her efforts to push it forward.

Ultimately, her desperate balancing act came to an end following the umpteenth failure in Parliament of one her many proposals for a compromise.

“It is and will always remain a matter of deep regret to me that I have not been able to deliver Brexit,” May said in her announcement outside 10 Downing St. in London.

She is leaving with “no ill will but with enormous and enduring gratitude to have had the opportunity to serve the country I love,” May said in conclusion of her speech, her voice cracking and tears filling her eyes as she uttered the final three words. She turned around abruptly and headed back toward the prime minister’s residence, the sounds of her footsteps fading.

To her many opponents, May’s resignation could not have come soon enough. But for many British Jews, the departure of May, who likely will be succeeded by another member of her Conservative Party after she steps down on June 7, means goodbye to one of the friendliest prime ministers in U.K. history.

The board’s current president, Marie van der Zyl, published a glowing endorsement of May on Friday, calling her a “true friend” to the community and recalling how the United Kingdom under May has taken unprecedented positions in favor of the Jewish people and Israel.

Her Cabinet led the adoption of the International Holocaust Remembrance Agency’s definition of anti-Semitism, which some anti-Israel activists reject for the ways it connects anti-Israel activity to anti-Jewish sentiments. It also has blacklisted the entire Hezbollah group rather than just its military wing.

In 2017, the United Kingdom under May said it would vote against a permanent article against Israel on the United Nations Human Rights Council. Last month, the rest of Europe followed in Britain’s footsteps.

Corbyn is an anti-Israel stalwart who has defended an anti-Semitic mural and said British-born “Zionists” don’t understand irony. He attracted thousands from the far left to join Labour. Discourse within the ranks became so toxic that many Jews, including prominent Jewish lawmakers, left the party.

But as the ruling party, Arkush said, the Conservatives would have been wrong to ignore the problem altogether.

In March, 15 local Conservative politicians who had been suspended for posting anti-Muslim rhetoric were quietly reinstated. One of them called Saudis “sand peasants.” Another compared Asians to dogs. In December, a Conservative Party complaints panel cleared May’s former foreign secretary, Boris Johnson, of complaints after he compared women wearing burkas to mailboxes and bank robbers.

Johnson is a leading candidate to succeed May. He has been outspoken in his support for Israel, calling it a “miracle” during a 2017 speech.

It hasn’t worked out well for May, at least in the House of Commons, the lower house of the Parliament. A majority rejected her plans at least four times.

The ridicule may have partially backfired, producing sympathy toward May even among some of her critics. But her popularity remained low. In a poll from December, only 41 percent of respondents said she was decisive. It was the highest score she had received in polls since the 2017 elections, which she won narrowly.

As for Hoffman, an economist, he said he won’t support anyone committed to Brexit, which he calls “a tragedy if it happens.” Instead of the Conservatives promoting the move, he and many other Britons want a second referendum on the issue.

If not for Brexit, Hoffman said he would have supported May.