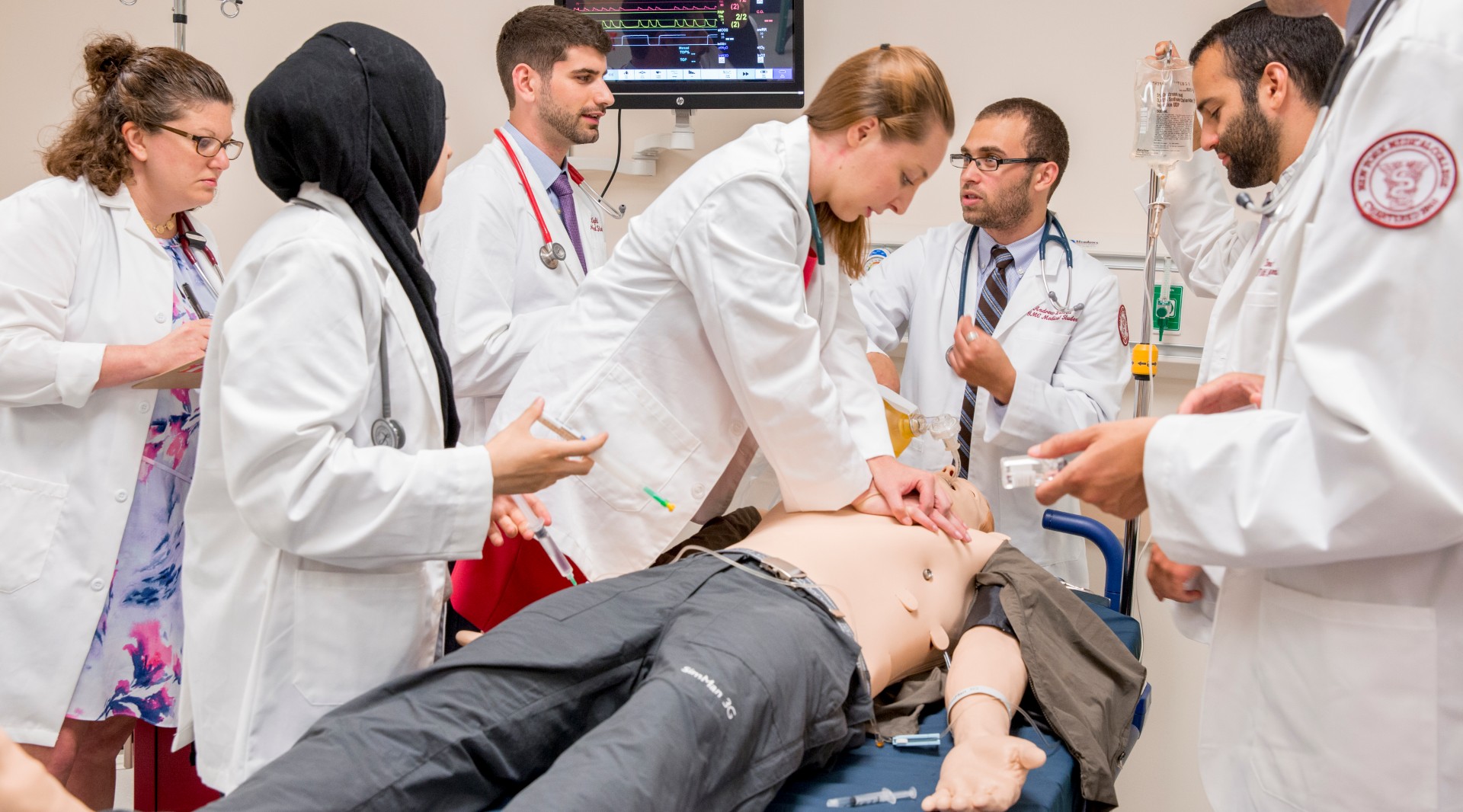 Founded in 1860, New York Medical College was an affiliate of the Roman Catholic Archdiocese from 1971 until Touro, a Jewish-run university, took over in 2011. (Courtesy of NYMC)
Advertisement

For her final project in a course on the history of medicine, first-year medical student Raeesa Hossain joined with four fellow students from New York Medical College to interview a Holocaust survivor deported to Auschwitz as a child.

The survivor told the students how his experience during the war had affected his life and his attitude toward the medical profession. When he arrived at Auschwitz, he and his twin brother were separated from his mother by Josef Mengele, the notorious Nazi doctor who performed deadly “experiments” on twins.

The survivor believed he had managed to avoid death because he was a twin. Mengele’s subjects were often better fed and housed than other inmates and spared the gas chambers. But his experience also left the scar of an aversion to doctors, whom he refused to see until decades later, when he could no longer avoid it.

“It was really an inspiration to see how resilient someone can be,” Hossain said. “And I think this is something that I can bring to my medical career because it’s given me a different perspective on how to become a more well-rounded physician. We’re going to have patients that have dealt with various horrific circumstances and we have to learn how to talk to these patients.”

This kind of learning experience — helping students develop respect for different kinds of patients — has become one of the defining features of the curriculum at New York Medical College since it became part of the Touro College and University System, the largest university in the United States under Jewish auspices. Founded in 1860, New York Medical College, based in Valhalla, New York, some 25 miles north of Manhattan, had been an affiliate of the Roman Catholic Archdiocese from 1971 until Touro took over in 2011. The Valhalla campus includes programs in medicine, dentistry, physical therapy, speech pathology, public health, nursing, biostatistics, medical ethics and graduate-level biomedical sciences.

Since Touro assumed control, New York Medical College has developed a program and curriculum that reflects its Jewish character. It’s not just in the special Jewish accommodations the school offers — such as an academic calendar built around the Jewish holidays and kosher food in the cafeteria — but also in the ways New York Medical College applies a uniquely Jewish lens to health sciences education.

“What I think is unique here, and which I think has really never been done in America, is to be able to give a palpable Jewish component to parts of the instruction,” said Rabbi Moshe Krupka, Touro’s executive vice president.

The college hosts an annual program on Holocaust Remembrance Day that addresses a medical theme, such as the question of whether diseases named for German neuroscientists who conducted research on concentration camp inmates should be renamed. A class field trip to the Museum of Jewish Heritage in Manhattan served as a prompt for discussions about the ethics of having an anesthesiologist participate in the capture of Adolf Eichmann.

And New York Medical College’s school of medicine is perhaps the only one in the country that requires its students to take a course in the history of medicine that includes a segment on bioethics after the Holocaust.

“You cannot graduate with an M.D. unless you understand the roles of physicians during the Holocaust, what went wrong with German medicine, similarities to the role of physicians in the American slave trade, and what all this means for the present,” said Edward Halperin, the college chancellor and CEO, and the instructor in the history of medicine course. 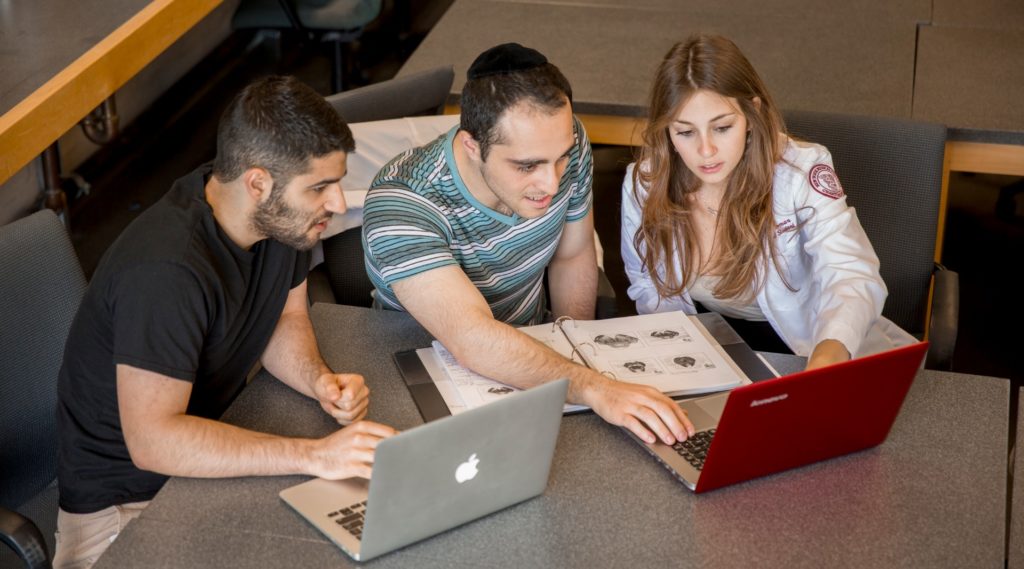 New York Medical College seeks to apply a uniquely Jewish lens to health sciences education, including mandatory classes on bioethics after the Holocaust. (Courtesy of NYMC)

Rabbi Ira Bedzow, who directs the medical ethics program at the college, said the school is unique in teaching students to understand the specific role of religion in medical decision-making.

While recognizing a patient’s autonomy in deciding on a particular course of treatment, Bedzow teaches a nuanced approach to medical decision-making. Rather than impart an absolutist view of the ethical imperative in a given clinical circumstance, Bedzow encourages students to understand that every patient faces medical decision-making through their own particular cultural lens.

As a Jewish institution, Bedzow believes the college is uniquely well-positioned to teach that.

“We recognize that we come from a certain cultural background, and we know that our cultural background is not ubiquitous,” Bedzow said. “Our tradition, our values, our priorities — we’re putting them right out there so that they are recognized and not part of an unconscious bias. It also makes it easier for us to recognize the values that others have are important.”

Touro’s merger with the college in 2011 initially prompted some skepticism from faculty members who feared that Touro — whose founding purpose was to provide higher educational opportunities to observant Jews — would impose Orthodox standards on the entire college community. One employee, quoted in a 2012 New York Times article, demanded to know whether he would still be permitted to eat a ham sandwich at his table in the cafeteria (answer: yes, as long as he didn’t bring the sandwich into the food preparation area).

But those concerns have faded, faculty members say. The college has remained diverse, and Touro has brought a level of financial stability and broader institutional support that the college lacked under the archdiocese.

“It was just a failing institution, and it turned around completely,” said Leonard Newman, a 1970 graduate of the college and now its chair of pediatrics. “The whole atmosphere has changed dramatically.”

Since the takeover, the medical school’s yield rate — the percentage of accepted students who actually enroll in the college — has increased from just over 25 percent to roughly 35 percent, comparable to other private medical schools. The average GPA and MCAT scores of incoming students have also risen. 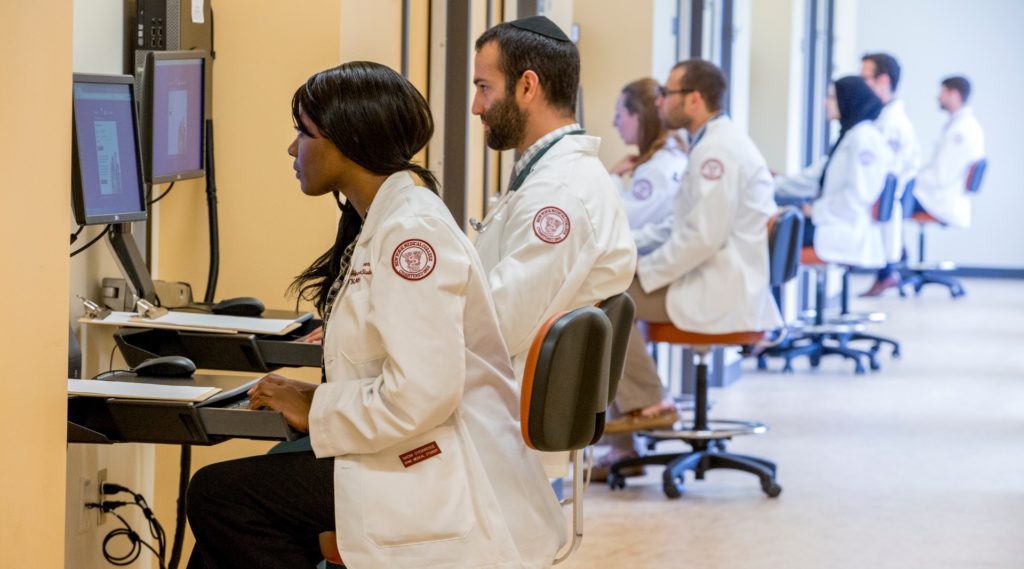 New York Medical College’s curriculum draws on Jewish ethics and its campus offers certain accommodations for religious Jews, but the college also has attracted a large number of minority students and has daily Muslim prayer services. (Courtesy of NYMC)

Officials note that even as the school has sought to draw on Jewish ethics to inform the college’s academic program, it has attracted a large number of minority students. A Muslim prayer group meets daily on campus. The medical school now offers full training in all manners of contraception, like the majority of US schools, which was not the case under the archdiocese.

“If someone’s personal religious views guide them in how they deal with decisions about reproductive health, that is their right,” Halperin said. “But a well-trained doctor needs to know about all reproductive health options, period.”

At the same time, New York Medical College has taken steps to maximize its appeal to observant Jews. Aside from Jewish holidays off and kosher food, the campus has an eruv enclosure to allow observant Jews to carry on the Sabbath and multiple daily prayer services. The school has also devised ways for Jewish medical, dental, and physical therapy students whose religious obligations preclude contact with cadavers, such as cohanim, to participate in gross anatomy courses.

“Knowledge without values is not useful. Healthcare has to be grounded in firm ethical principles,” Halperin said. “Respect for individuals, helping people who are suffering, helping people avoid premature death — these are fundamentally Jewish concepts. To engage in healing is about as close to holy work as we get in our secular lives.”