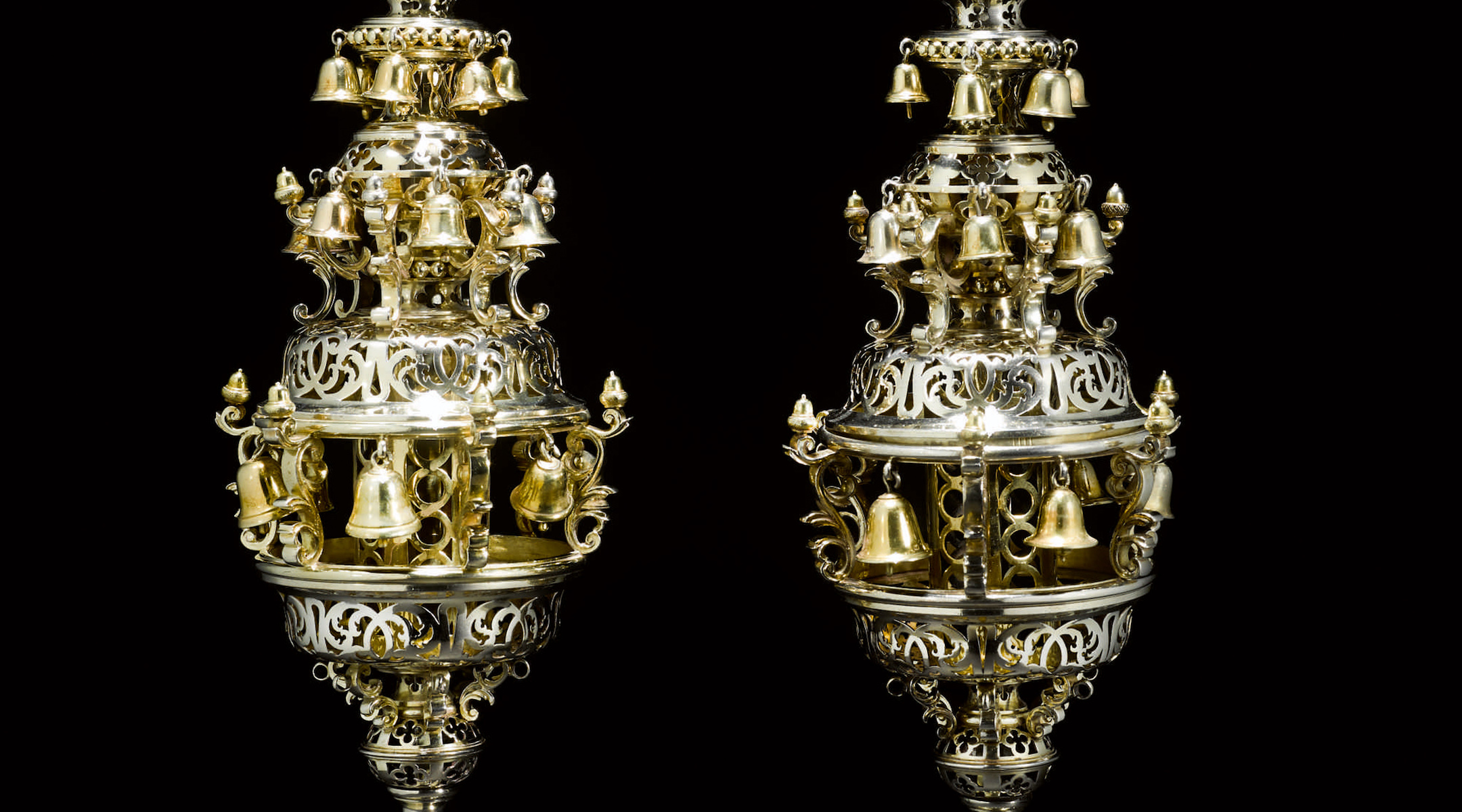 A pair of English parcel-gilt silver torah finials, from 1764, by British silversmith Edward Aldridge, was acquired by the Museum of Fine Arts in Boston at a Sotheby's Judaica auction in New York. (Courtesy of MFA)
Advertisement

The set is considered among the earliest surviving examples of the ritual Torah ornaments.

The finials, to which are attached tiny crowns and bells, are used to adorn the top handles on a Torah scroll.

The two sets were were among the top sellers at Sotheby’s Auction of Important Judaica held June 5 in New York. Bids totaled $2.7 million, according to Amanda Bass of Sotheby’s.

The sale price for the 17-inch German finials, made circa 1688-89 by Jurgen Richels, “is among the top five prices for Torah finials at auction,” Bass wrote in an email, quoting Sotheby’s specialists.

She said itlis unusual to see 17th-century finials at auction.

Both are very special and of very fine quality,”  Simona Di Nepi, the MFA’s Charles and Lynn Schusterman curator of Judaica, told the Jewish Telegraphic Agency in a phone conversation. “Their price reflects the rarity, beauty and the level of craftsmanship.”

Richels was a prolific silversmith with a wide body of work including Christian religious items, she said.

“These are an exceptionally early date for surviving Torah finials,” Di Nepi said.

The 21-inch English finials, made by Edward Aldridge around 1764, were sold by The Central Synagogue in London. Their provenance is notable: They were formerly in the collection of Philip Salomons, one of the most prominent and early collectors of Judaica in England, according to a statement from Sotheby’s. His brother David was the first Jewish lord mayor of London.

Di Nepi said both bear the “maker’s mark,” establishing the authenticity of the artists.

The English finials are an especially important addition to the Museum of Fine Arts. While the museum has what is considered one of the strongest collections of English silver, this is the first piece of English Judaica, Di Nepi said.

The German finials were purchased with a donation from an anonymous donor combined with funds from the museum, which paid for the English finials with its own funds. Di Nepi anticipates that both will eventually be on public display at the MFA.

Also sold at the Sotheby’s auction was Isidor Kaufmann’s “Portrait of a Rabbi with a Young Pupil,” a painting by the Hungarian-born Jewish painter (1853-1921), notable for capturing Jewish shtetl life across Galicia and eastern Poland. It sold to a private collector for $375,000.

A collection of nearly 300 postcards from 20th-century American Jewish hotels and resorts, largely from the Catskill Mountains in upstate New York, but also from other locations across the country, sold for $8,750 to a private collector. Bass said the collection is fun and “documents Jewish leisure culture in America.”