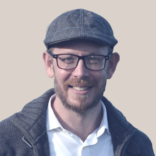 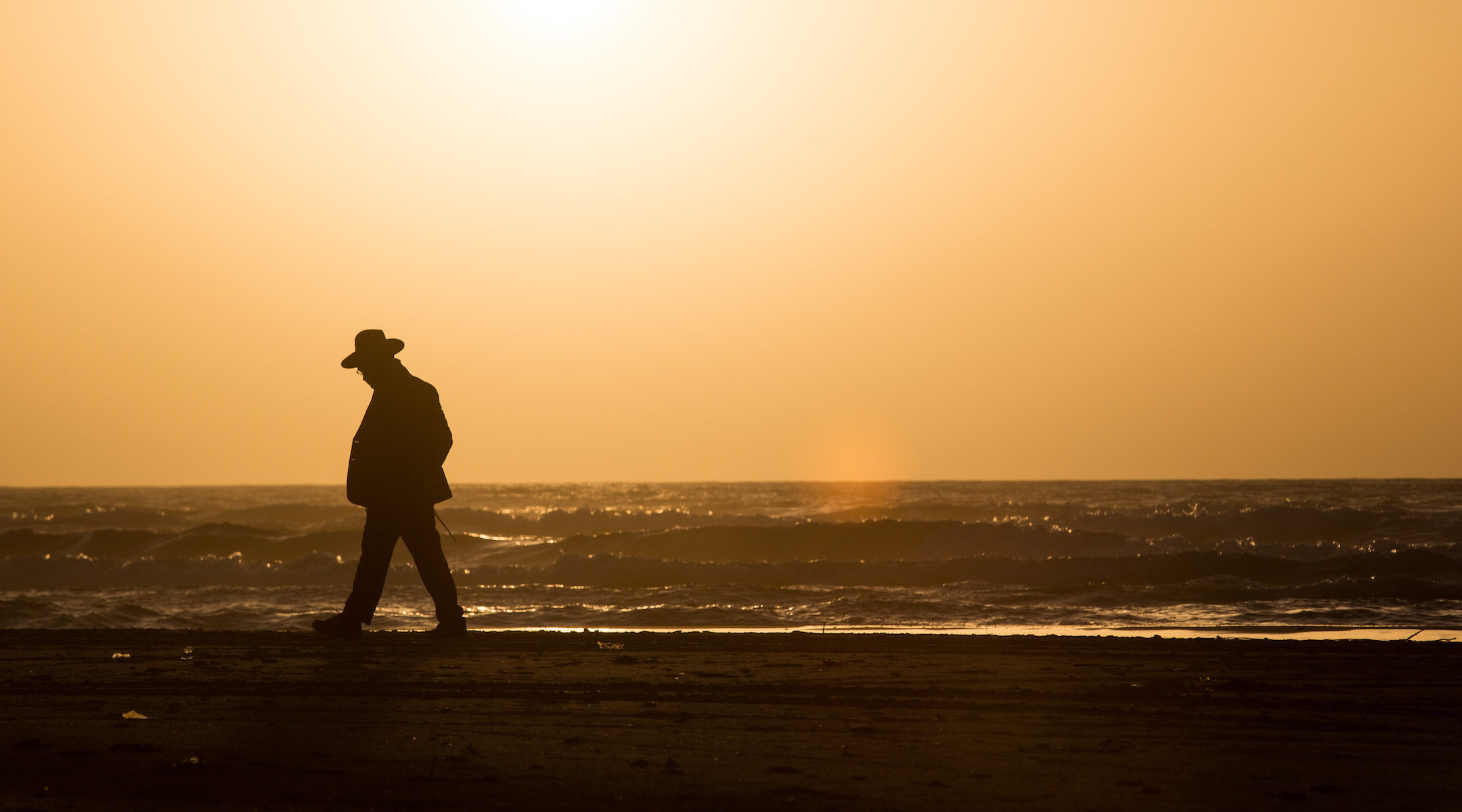 A haredi Orthodox man walks on the beach during sunset at Ashdod Beach in Israel, Jan. 31, 2019. (Hadas Parush/Flash90)
Advertisement

JERUSALEM (JTA) — One evening each week in this city, in a space that functions during daylight hours as a children’s playroom, I honor Orthodox Jewish fathers and celebrate fatherhood by attending to their emotional needs in group psychotherapy.

Dump trucks, dolls and plastic playthings fill plywood shelves and primary-colored bins. On a diminutive corner table, Legos are pushed aside in deference to adult-friendly coffee and tea. As if in a boardroom or office, these men sit cross-legged and rigid, addressing mature themes with the abstractions mature people use.

Some members have been attending these 90-minute sessions for years. These adults do not come to play.

The dynamic group, which consists of two co-leaders from the same homogenous community, meets in the basement of a neighborhood clinic. In these meetings, men learn about themselves from understanding each other. Their moods become improved from mutual appreciation and respect. Insight, in group therapy, results from interpersonal exchanges and not only from a therapist’s contribution. The notion of collective learning fits well with Jewish principles of mutual responsibility, just as the possibility of cooperative healing is suitable for every culture and way of life.

Treating Orthodox Jewish men in psychotherapy requires appreciating their particular vulnerabilities. As an Orthodox Jewish father myself, I am aware of and sensitive to those concerns.

In Jerusalem and in other religiously conservative settings, traditional husbands and fathers struggle within their patriarchal roles more than popular periodicals suggest. Patriarchy is not only about the subjugation of women, but also demands the distinct obligations of men.

Orthodox Judaism is a patriarchal society preserved by matrilineal descent, a way of living born to mothers but passed on traditionally by fathers to sons. At the head of their households, Orthodox Jewish men experience their religion in gender-specific ways. From leading public services to orchestrating domestic traditions, an Orthodox father is expected to achieve proficiency in Jewish scholarship, liturgy and theology. Some observant men struggle to reconcile secular and religious ambitions. For some traditional fathers, leadership overload is isolating and severe.

The caricature of the reticent male unwilling to disclose his emotions is recognizable and not easily dismissed. An elaborate synthesis of nature and nurture leads some men to rely on monosyllabic responses and some women not to perceive what men nonverbally express. Some men are more objective than emotive, and more inhibited. Other men maintain rich emotional vocabularies, ask more questions and are less reserved. While the number of males who favor silence may be equaled by the number of men who prefer conversation, the unhelpful categorization persists.

In addition to the effects of gender stereotyping, the Orthodox Jewish men in this group have been shaped by a worldview that emphasizes right and wrong and leaves less room for the morality of individual experience. Biblical doctrine and associated Talmudic tradition govern all areas of the human adventure, from the exalted to the mundane. From fashion to diet, no endeavor or encounter is beyond the scope of regulation. Moral triumphs and ethical failures are constant possibilities, as are the associated likelihoods of pride and shame.

In social contexts, and in group therapy, Orthodox men are often reticent to discuss taboo subjects, and regularly use generalizing pronouns to avoid personal responsibility. The dishonor associated with nonconformity to religious and cultural expectations renders some observant men hopeless and forlorn.

Orthodox Jewish fathers are burdened in ways nonobservant fathers are not. Tasked with transmitting tradition in ways meaningful and lasting, an effectual Orthodox father is expected to function as a breadwinner, historian, philosopher and guide. The stakes are impossibly high. Orthodox fathers often feel accountable for the mistakes of their children and shame for making descendants suffer for their faults. To a dutiful father, assimilation is as dangerous as persecution. When Orthodox men struggle to be more effective fathers, they are struggling to perpetuate their culture and their beliefs.

Still, in a scheme that emphasizes rituals and ceremonies, it is easy to hide behind platitudes and rote behaviors. Some men find serenity in religious rites, their spiritual journeys provoking empathy and personal growth. Other men find in Orthodoxy a place to hide from self-examination. Some men find assurances in ceremonial living. Other men feel anonymous and suffer in loneliness, remorse and doubt.

For emotionally isolated men, group therapy can help. In his guide on masculinity, “Man Enough,” the American psychiatrist Frank Pittman described men frightened of their own inadequacy, unhappy and alone. In some traditional communities, men are conditioned to be resourceful, independent and strong. At the same time, manhood can be demanding and lonely.

“Sometimes there is something that a man needs to reveal, needs to talk over with another man, and there may be no man available to him,” Pittman wrote.

Group psychotherapy is a forum where men can interact candidly and learn from each other how to make changes to unhealthy and unhelpful thoughts and behaviors. A withdrawn male can learn to be more assertive. An aggressive male can come to communicate with more grace.

A powerful source of relief in the early stages of group therapy is helping an individual understand that he is not unique. After hearing peers reveal worries similar to their own, men often describe feeling more validated and less by themselves.

The premise for psychotherapy exists in Orthodox tradition, too.

“When there is a concern in a man’s heart,” suggests the Talmud in Yoma (75A), “let him verbalize it to others.”

“Two are better than one,” advises Ecclesiastes (4:9), “but woe to him that is alone when he falls.”

To the sages, comfort is to be found in an available, empathetic ear. More than the skills discussed and the content of their discontents, in group therapy the process of telling their stories becomes restorative for lonely men over time. Sadness lessens without specific solutions. Desperation lifts without definitive results.

My experience in Jerusalem shows that group therapy can help traditional men and families without redefining what it means for them to be a man.

This Father’s Day in Jerusalem, I will celebrate fatherhood by taking it seriously. I will consider the men in our psychotherapy group and appreciate the distinct struggles of men in other faith communities. In our meetings, I will encourage direct communication and discourage the use of generalizing pronouns and cliches. I will empathize with the shame and loneliness associated with transgression against cultural and religious expectations.

And in the basement playroom, I will remember that for some men of deep conviction, fatherhood may be rewarding but is not always fun and games.

Mendel Horowitz
an educator and family therapist in Jerusalem and member of the American Group Psychotherapy Association, is the author of Jerusalem’s Lonely Fathers: Of Empathy, Masculinity, and Faith, a nonfiction narrative in progress from which this essay is adapted. His essays have appeared in The Washington Post, The Jerusalem Post, the Forward and the Jewish Journal.
The views and opinions expressed in this article are those of the author and do not necessarily reflect the views of JTA or its parent company, 70 Faces Media.