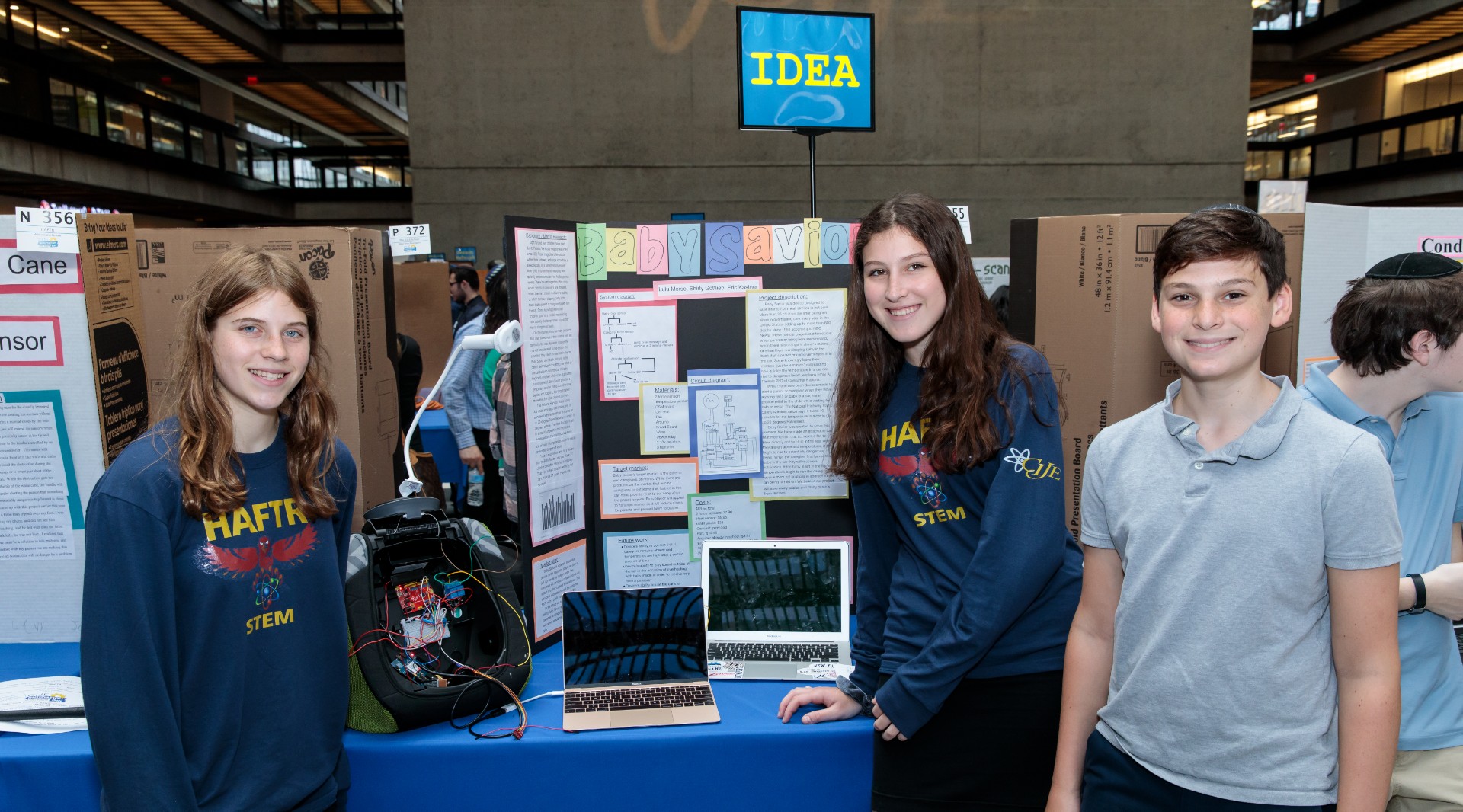 Students from New York's Hebrew Academy of the Five Towns & Rockaway showcase a device they engineered to alert parents and cool a baby in case of an infant inadvertently left in a parked car. (Courtesy of the Center for Initiatives in Jewish Education)
Advertisement

The fires were still fresh on the Jewish sophomore’s mind when she and fellow students Sarah Cohen and Devin Scharf put their heads together to come up with a novel concept for a school science project.

The trio decided to engineer a forest fire detection system that equips trees with sensors to signal firehouses in case of a blaze. The project, which involved much trial and error and took the students nearly four months to develop, was one of some 478 projects on display at a recent annual fair for students from Jewish high schools to demonstrate their prowess in engineering and design.

More than 1,450 students participated from 44 schools in states including New York, New Jersey, Connecticut, Pennsylvania, Maryland and Texas. The Modern Orthodox Frisch School in Paramus, New Jersey, which Sadinoff attends, has its own engineering department and was among the largest represented at the fair.

“You go and experiment and you learn,” said Sadinoff, who is in Frisch’s engineering track for freshmen and sophomores. “By the time we got to this project, I was able to write my own code and figure out a lot of things on my own. I feel great to have accomplished something, knowing all the effort and work I put in. All that hard work really paid off.”

The New Jersey fair — the eighth annual Innovation Day run by the Center for Initiatives in Jewish Education, or CIJE — was remarkable not just for the breadth of science and engineering projects, but for the diversity of Jewish participants: Students came from single-sex Orthodox yeshivas, pluralistic community day schools, Modern Orthodox schools, Reform schools and Solomon Schechter schools, which are affiliated with the Conservative movement.

“Each and every one of you has the strength within yourself, the ability and the passion to reach for the stars and to change — and not only change, but to improve the world,” Judy Lebovits, CIJE’s vice president and director, told the audience. Quoting the late Israeli president Shimon Peres, she said, “Dream big, work hard, be a good person — in other words, be a mensch and surround yourself with good people, then you will succeed.” 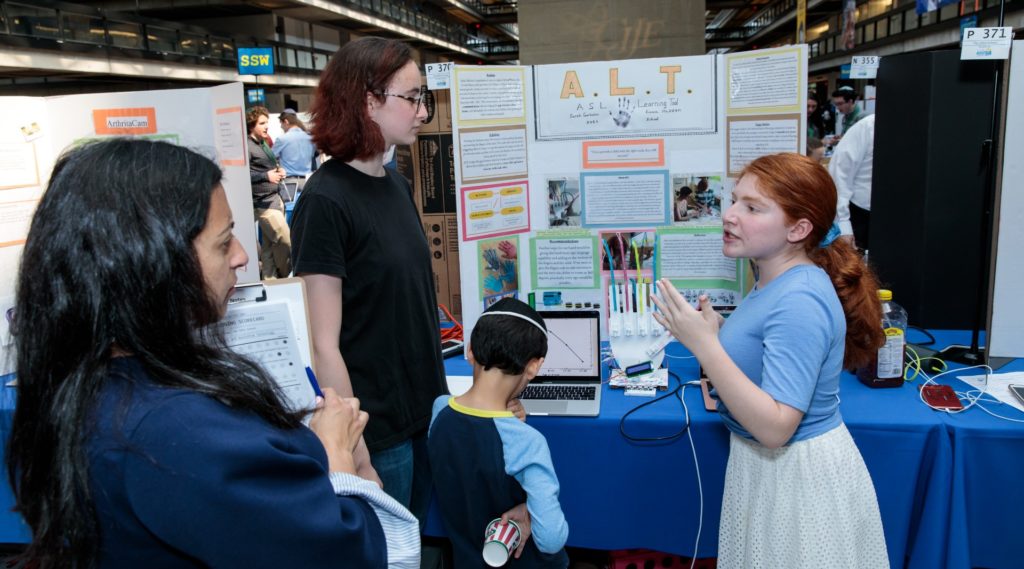 As a school project, students from New Jersey’s Idea School engineered a robotic hand to help deaf children and their families learn American Sign Language. (Courtesy of the Center for Initiatives in Jewish Education)

The Innovation Day is one of several for Jewish day schools across the country. Others will take place this year in Chicago, Los Angeles, Baltimore and Boca Raton, Florida. The May 19 fair was held at Bell Works in Holmdel, New Jersey, the site of the former Bell Labs, where innovations such as the binary computer, transistor and touch-tone telephone were invented.

The crowds in the auditorium were a sign of the growing seriousness with which Jewish day schools are investing in the STEM fields: science, technology, math and engineering. More than 170 Jewish schools from across the denominational spectrum and in 16 states participate in STEM-oriented programs supported by the Center for Initiatives in Jewish Education.

For many students, the fair represents the culmination of months of preparation.

“I’m just amazed at how much this program has grown,” said Anastasia Kelly, a fair judge and a local teacher. “The level of design and ingenuity is remarkable.”

Using a set budget, students create and engineer their inventions using electronic components, coding and an Arduino platform — a package of hardware and software that allows students to build projects using components such as LEDs, motors, robots and drones. The projects must benefit society or their community in some way. 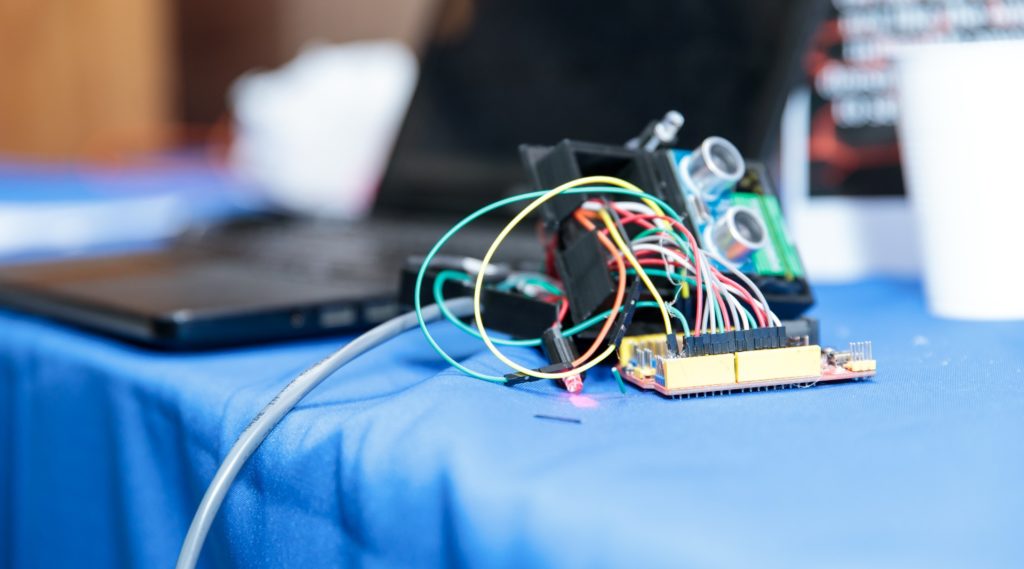 More than 170 Jewish schools from across the denominational spectrum and in 16 states participate in STEM-oriented programs supported by the Center for Initiatives in Jewish Education. (Courtesy of CIJE)

A group of four high school juniors from Bnos Yisroel, an Orthodox all-girls school in Baltimore, engineered an ID tag that young children without cellphones can scan upon boarding the school bus that sends an automatic text alert to parents. The idea is to let parents know their kids made it to the bus stop and onto the bus safely. The RFID-based device, which the girls call Stay Pro“Text”ed, can also be put on a personalized keychain that attaches to backpacks or bracelets to ensure young kids don’t lose the tags.

“In our community, the parents have phones and the kids don’t,” 11th-grader Menucha Shmidman said. “We wanted to help parents not be so worried in the morning that their kids got on the bus.”

Judge and engineering teacher Raz Idan, director of fabrication at the Solomon Schechter School of Westchester’s Upper School, said one of his main goals in sending students to the fair is raising their confidence levels. Aside from engineering, the students also learn important skills such as presentation and public speaking.

Regardless of how successful the students’ projects turn out, even scientific setbacks offer learning value, Idan said.

“Failure is part of the process,” he said.

The ultimate goal of the project is to help Jewish schools transform the way they teach secular subjects — and maybe Jewish ones, too.

“It’s about teaching by inquiry and helping students learn the importance of thinking and allowing kids to be creative and really address their own inner talents,” Lebovits said. “The pride these students gain is immense. They are able to dream and believe in themselves.”