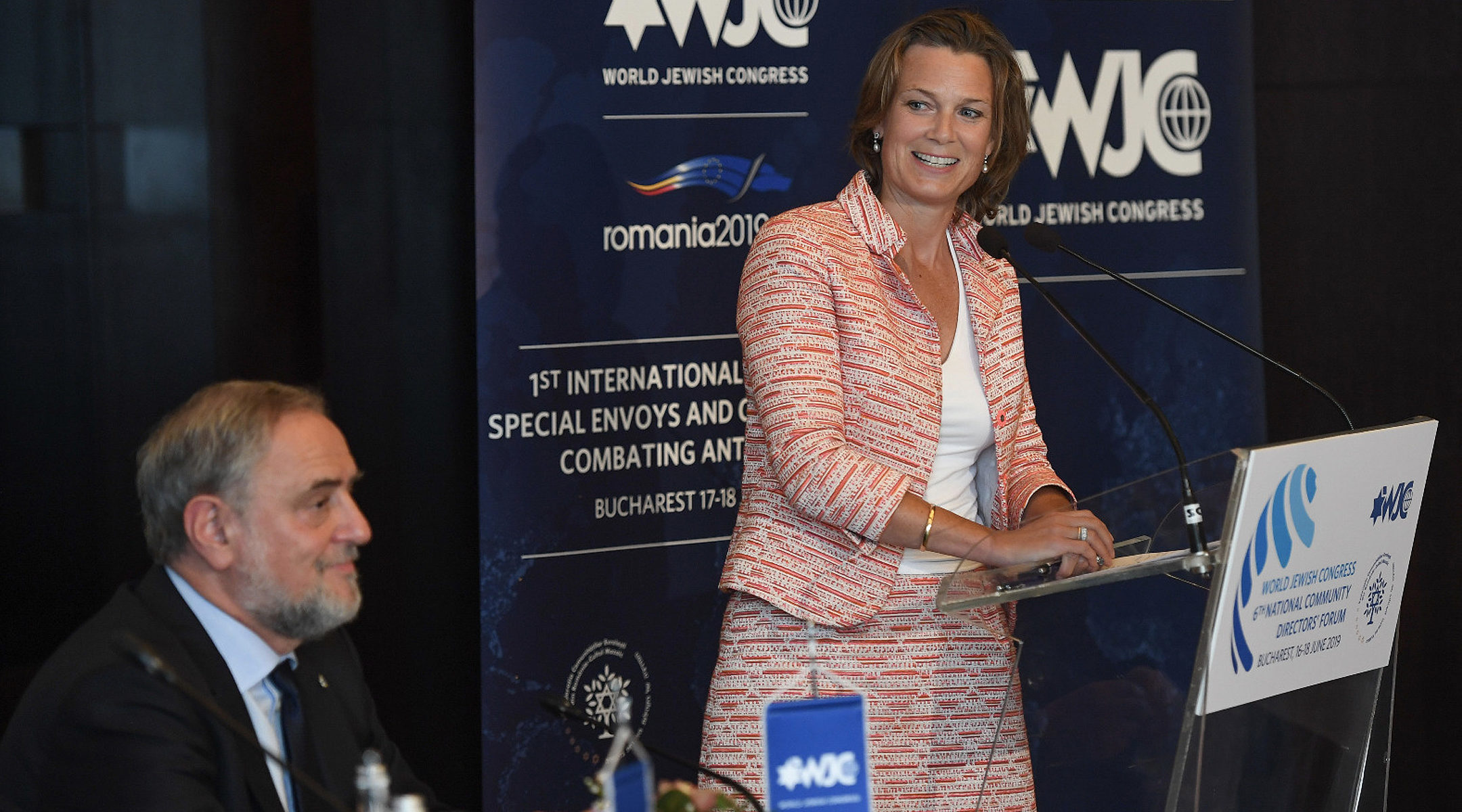 BUCHAREST, Romania (JTA) — Few European officials would be pleased to hear that during their tenure, “anti-Semitism has exploded.”

Least of all Katharina von Schnurbein, the German-born EU official who in 2015 was appointed as the European Union’s first coordinator on combating anti-Semitism.

But when the chief rabbi of Rome said the phrase, he meant it as a compliment.

Von Schnurbein’s relentless efforts generated headlines that drew considerable attention to the problem that she was hired to fight, amplifying its footprint in the media and government.

“Because we are looking into it, it is more visible,” she said during an interview Monday with the Jewish Telegraphic Agency in this capital city during the inaugural international meeting of special envoys and coordinators combating anti-Semitism.

Indeed, some of the most shocking headlines about anti-Semitism in Europe since 2015 came from work promoted by von Schnurbein, who began working at the European Union in 2002 as a press officer.

One of the headlines came from a groundbreaking EU survey of more than 16,000 European Jews, that was published last year. About a third of the Jews polled in 12 countries said they avoid Jewish events or places out of fear for their safety. A similar number said they have considered emigrating in the past five years because they did not feel safe as Jews.

Another major headline came in 2016 when four internet giants — YouTube, Microsoft, Facebook and Twitter — signed an agreement with the European Commission committing to removing anti-Semitic content. It triggered a slew of articles profiling online hate.

Anti-Semitism was in the news again in 2017 when the European Parliament adopted the definition of anti-Semitism of the International Holocaust Remembrance Alliance, or IHRA. It includes examples of how vitriol against Israel can be indistinguishable from anti-Semitism, heartening many Jews but angering pro-Palestinian activists.

Von Schnurbein, 45, a soft-spoken mother of four originally from the German state of Bavaria, does not claim that rising anti-Semitism is merely a perception fed by her efforts.

“I believe in fact-based policy, and the facts are worrisome,” said von Schnurbein, referencing increases in documented anti-Semitic incidents in 2018 in her native Germany (19 percent over 2017), the United Kingdom (16 percent), France (74 percent) and the Netherlands (19 percent).

Yet those figures are not von Schnurbein’s benchmark for success, as they often reflect fluctuations in the victims’ willingness to report incidents, as well as major flaws and differences in how individual countries collect and classify data.

Rather she takes into account how European Jews perceive their reality.

“Our ultimate aim must be to ensure that when we hold another survey in five or six years among Jewish populations in Europe, we’ll see changes in the trends of how Jews feel: more secure, that they see their future above all in Europe, feel they can actually live the way they want, free to express their identity — including support for Israel — without feeling afraid to say it.”

Though she is not Jewish, von Schnurbein’s first encounter with anti-Semitism was connected to her German parents’ steadfast support for the Jewish state.

“I recall an incident from my childhood when my mother hung an Israeli flag out the window on the eve before we were to receive Israeli guests,” she said last year in an interview with the Israeli Hebrew-language daily Hamodia. “The next morning we discovered a huge swastika sprayed on the street,” which her mother covered up ahead of the visit.

At the EU, von Schnurbein is promoting a view on Israel that is neither particularly popular nor consensus in that institution.

”Clearly anti-Semitism hides behind anti-Zionism,” she said in 2017 shortly before President Emmanuel Macron of France became the first head of state of any continental European power to argue the same.

Her positions did not escape the attention of promoters of the Palestinian cause, which is relatively popular in Europe.

“The German official has used her EU perch in a tireless campaign to smear defenders of Palestinian human rights,” Ali Abunimah, the founder of the anti-Israel activism website Electronic Intifada, wrote last year.

A smiley and sometimes meek speaker, von Schnurbein, a career EU bureaucrat, displays an aversion to hyperbole matched by a preference for statistical data. Her speeches, weighted down by EU jargon and percentage points and complicated by careful nuances, pale in comparison to those of stronger orators like her U.S. counterpart, Elan Carr, a former deputy district attorney.

Like many EU bureaucrats, von Schnurbein can come across as evasive.

In 2016, she argued to JTA that the European Union can fight anti-Semitism without actually defining it. She was defending the EU’s removal in 2013 of a definition very similar to the IHRA’s amid lobbying by pro-Palestinian activists who claimed it served to silence them.

At the time, von Schnurbein was a key promoter of the initiative to have the European Union adopt again the IHRA definition, which was indeed adopted in 2017 by the European Parliament. Several EU member states, including Germany, the United Kingdom, Romania and Bulgaria, have followed suit.

She downplayed the significance of deep flaws exposed by JTA and others in the documentation of anti-Semitism in Germany — authorities there are accused of undercounting acts carried out by Muslims – and France, where the government’s human rights watchdog is on record questioning whether its Jews are actually being targeted over Israel.

“There are issues and we are working to address them,” but Western European countries are “on the same page” when it comes to fighting anti-Semitism, von Schnurbein told JTA.

She also defended the controversial statement by her German government counterpart, Felix Klein, who last month said wearing a kippah in some parts of Germany is unsafe. Von Schnurbein said his statement was not a surrender but an “alarm.”

While at times she comes across as an apparatchik in defending the EU line externally, von Schnurbein internally is working relentlessly to change it, Jewish community leaders and colleagues said.

“She is the real deal,” Carr told the Jewish Telegraphic Agency.

“We have never met a top EU professional as passionate in implementing what she deeply believes in,” Robert Singer, the executive vice president of the World Jewish Congress, said about von Schnurbein.

She is the “indefatigable heroine of the struggle for many of us,” said Laurence Weinbaum, a historian and director of WJC’s Israel Council on Foreign Relations.

Preparing to pose for a picture at the conference here, von Schnurbein hugged an orphaned podium, lifted it and moved it outside of the frame.

“Katharina, you’re moving furniture,” Gillian Merron, the chief executive of the Board of Deputies of British Jews, remarked in friendly amusement.

“Gillian, this is nothing: I have four small children,” von Schnurbein replied, laughing.

But von Schnurbein’s tirelessness comes at a personal cost. Both she and her husband, lawyer Alexander David von Franquemont, travel frequently for work on long intensive trips – though not at the same time because of the kids, two boys and two girls.

“But when he travels, he travels,” she said, intimating that her husband is focused on his work when he’s away doing it. “When I travel, part of me stays in Brussels with the children.”

Von Schnurbein has quickly won fans in what is by far her most senior position. (Before taking the highly visible post, she was in charge of coordinating the European Commission’s dialogue with churches, religions, philosophical and nonconfessional, or secular, organizations.)

“In large institutions, this kind of knowledge position is often a graveyard post in that it’s given to experts at the end of their career,” said Leon Shaltiel, director of the WJC office in Geneva. “Katharina could have put her feet up on her desk or do real work. She chose real work.”

Most notably, Shaltiel said, she wore down the resistance of opponents — including at American high-tech firms that are averse to subjecting themselves to European restrictions on hate speech – with a mix of persistence, political strong-arming and charm.

For a midlevel EU official like von Schnurbein, it makes sense to work hard at a springboard position like hers. But she described her motivation as ideological.

“We spend a lot of time explaining why anti-Semitism is not only a threat to the Jews and why it’s a threat to society at large,” she said. “We have seen in the past in history in Europe when Jews don’t feel safe in Europe anymore, it’s bad for Europe.”