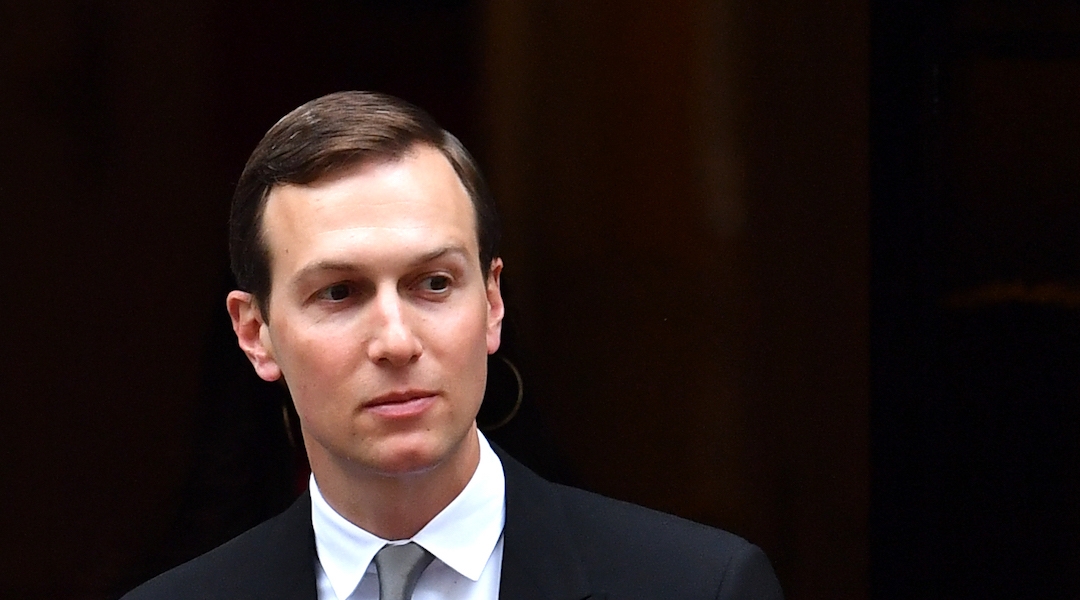 WASHINGTON (JTA) — Days ahead of a workshop where Jared Kushner will seek tens of billions of dollars for his Middle East peace plan, the White House unveiled an outline of its economic portion, including proposals, like a Gaza-West Bank travel corridor, that are sure to rattle Israel’s government.

The Peace to Prosperity plan authored by a team led by Kushner, President Donald Trump’s son-in-law and key adviser, was posted Saturday on the White House website. It does not outline the political portion of the peace plan, which the architects say will come in November, after Israel’s September elections.

The economic plan’s 40 pages enthusiastically endorse expressions of Palestinian identity, from Palestinian food to universities, and hint at political outcomes that could upset Israeli Prime Minister Benjamin Netanyahu’s plans to forge a coalition with parties to the right of his Likud party. Not mentioned, however, is Palestinian statehood.

In addition to the Gaza-West Bank link, which would inevitably cross Israeli territory, there are proposals to register Palestinian ownership of land and allow Palestinian farmers greater access to water and arable land.

These outcomes would put Netanyahu in a tough squeeze: He has been unremitting in his embrace of Trump, who has recognized Jerusalem as Israel’s capital, recognized Israeli sovereignty over the Golan Heights, pulled out of an Iran nuclear deal Netanyahu loathes, defunded the Palestinians and effectively campaigned for Netanyahu in April’s election.

But elements of the plan portend security compromises that Netanyahu might be loath to make. Chief among them is a $5 billion transportation project that would link the Gaza Strip and the West Bank.

Kushner’s plan envisions $50 billion to be disbursed on building infrastructure and capacity in the West Bank and the Gaza Strip, as well as to promote trade and tourism partnerships with Egypt, Jordan and Lebanon, with portions of the funding to go to these countries.

Neither the 40-page plan nor the accompanying 96-page breakdown of how the money will be spent mention statehood. Kushner has said he doesn’t find the term useful, and David Friedman, the U.S. ambassador to Israel, has said the political portion of the plan will relinquish to Israel security control of the West Bank, suggesting that full Palestinian sovereignty was not on the table. Netanyahu has retreated from favoring a two-state outcome and said he plans to extend Israeli sovereignty to Jewish settlements in the West Bank.

The Palestinian Authority, which is boycotting the workshop next week in Bahrain, has rejected the plan unseen in part because it seems clear that it will stop short of statehood and of a Palestinian claim to a portion of Jerusalem. The plan and its annex, which breaks down in detail where funds  should go, do not mention Jerusalem.

“A B C economics is that no monetary value can predicate or substitute economic sovereignty which is the first requirement for prosperity,” Husam Zomlot, the Palestine Liberation Organization envoy to Washington until he was expelled last year by the Trump administration to punish the Palestinians for their boycott of peace talks, said on Twitter.

Kushner in an interview with Reuters, which reported the plan before it was posted, said its publication could bring around skeptics.

“I find that in the real world, the way you solve problems is by really going into the details, putting forward proposals, agreeing, disagreeing on certain things — that’s very healthy, that’s how you resolve a conflict,” he said. “Remember, nobody agrees up until right before they do so. It’s not unexpected for people to posture and to criticize things, but what we’re hoping to do is create a framework where we can change the discussion and get people to look at these problems differently and more granularly and hopefully in a way that can lead to some breakthroughs.” 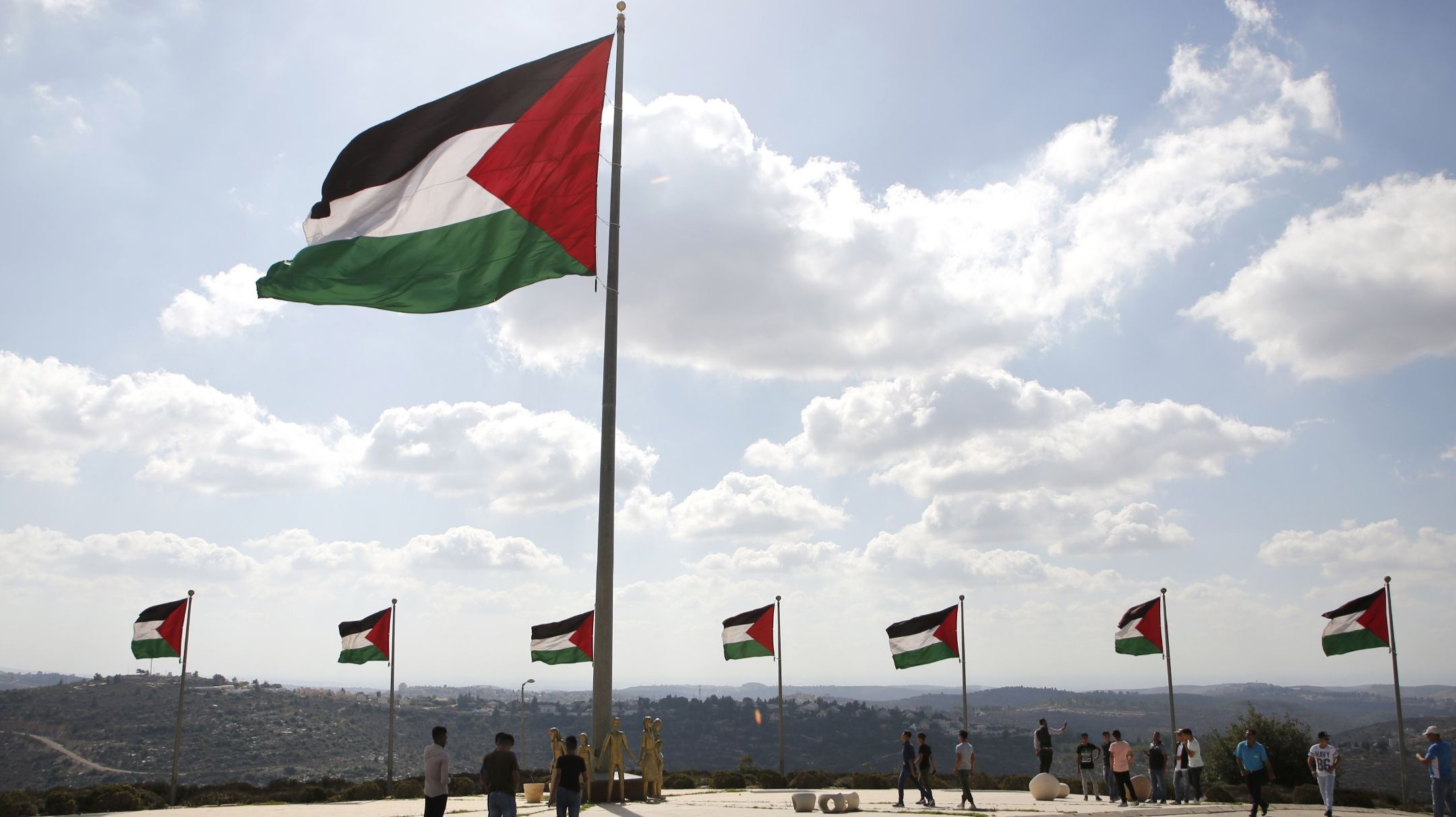 The Gaza-West Bank project would take about two years.

“Features could include an interurban rail line linking many of the major cities of Gaza and the West Bank for rapid urban transport, mass transport stations near urban centers, and connections to regional railways such as the Jordan railway project,” the proposal said.

A similar proposal was raised during the Oslo process in the late 1990s. Israeli officials at the time fretted that any system that transported Palestinians from Gaza, where the Hamas terrorist movement flourishes, to the West Bank across Israeli territory posed a massive security risk.

Other elements of the plan suggest an embrace of Palestinian national identity, which could also be a hard sell to Israeli hard-liners, and even to Netanyahu’s Likud party.

“A new flagship liberal arts and sciences university in the West Bank and Gaza” is tagged at $500 million. Palestinian universities have over the decades nurtured the Palestinian national identity and at times have been the nexus of protest at Israel’s occupation. Israeli authorities over the years have repeatedly shuttered the universities during periods of unrest.

Another $80 million has been set aside for the development of Palestinian arts, which often embrace a nationalist outlook, and $150 million is earmarked for the Palestinian museum near Ramallah. The museum is dedicated to celebrating Palestinian identity, including resistance to Israel.

“Traditional Palestinian cuisine varies across regions and excites visitors,” a segment on tourism says. “Each Palestinian city boasts its own trademark dishes and flavors, from Ramallah’s Rukab ice cream to the famed knafeh of Nablus.”

The plan includes nearly $28 billion earmarked for the West Bank and the Gaza Strip. Funds would also go to three neighboring countries, for cross border projects, including tourism: More than $7 billion for Jordan, $9 billion for Egypt and $6.3 billion for Lebanon. Unlike Jordan and Egypt, Lebanon does not have a peace treaty with Israel, and Hezbollah, an Iran-allied terrorist militia that rejects any accommodation with Israel, remains hugely influential in the country.

The proposal advocates for easing movement for Palestinians and greater access to fertile land and water.

“An improved business environment in the West Bank and Gaza and access to more land will create an enormous opportunity for farmers to expand their operations,” it says.

Unmentioned are the obstacles that Israeli policies, mindful of security and favoring Jewish settlement growth, impose on these ambitions.

The proposal’s optimistic outlook skates over some of the issues that have most vexed any resolution, including who exactly owns each acre of land.

“Land registration is a critical step in the transformation of the Palestinian economy, which will unlock property for use as collateral for capital and eliminate many existing barriers to development,” it says, not mentioning who would register the land and who would settle competing claims.

The plan proposes a vast expansion of border crossings, which will incur costs for Israel, if it is to secure and help staff the crossings.

The issue of governance, which presumably will feature in the political component, is absent — but nonetheless haunts the document. Hamas, a U.S. designated terrorist group, rules the Gaza Strip and the Trump administration and Congress have banned all but a small amount of direct funding to the Palestinian Authority.

Kushner, in Bahrain, will be in the position of lobbying the oil-rich leaders in the Persian Gulf to come up with money for projects in areas run by authorities that his government currently treats as pariahs. It’s not clear who will be in Bahrain: So far, only the Bahraini, Saudi and United Arab Emirates finance ministers have confirmed they will attend. The fund, the proposal says, will be “administered by an established multilateral development bank.”

There are other anomalies that fail to reconcile the stick the Trump administration has applied to the Palestinians, drying up their funding, with the plan’s disposition toward celebrating the Palestinians. It proposes training judges to make the judiciary independent — USAID, the State Department aid agency that Trump has removed from Palestinian areas, ran exactly such a program as recently as 2014.

“This project will provide short-term financial support to the Palestinian public sector to pay off its arrears to the private sector,” it says, arrears incurred in part because of cuts in U.S. funding.

The website features photos of schoolgirls walking by a school funded by USAID — funding Trump eliminated. It includes a picture of the Israeli and Palestinian co-leaders of the Parents Circle, a peace dialogue group for families of people killed in the conflict — a program once funded by the United States that also was cut by Trump. 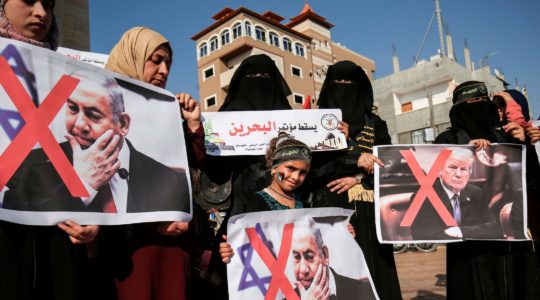 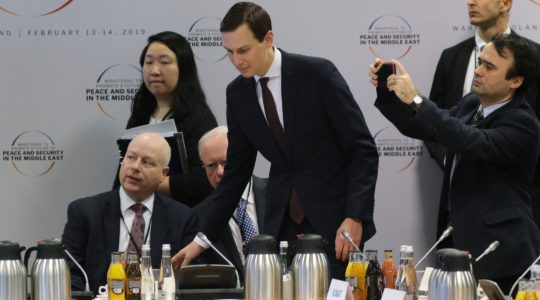