At Israel’s first student-run health clinic, the mantra is health care for all — and it’s free 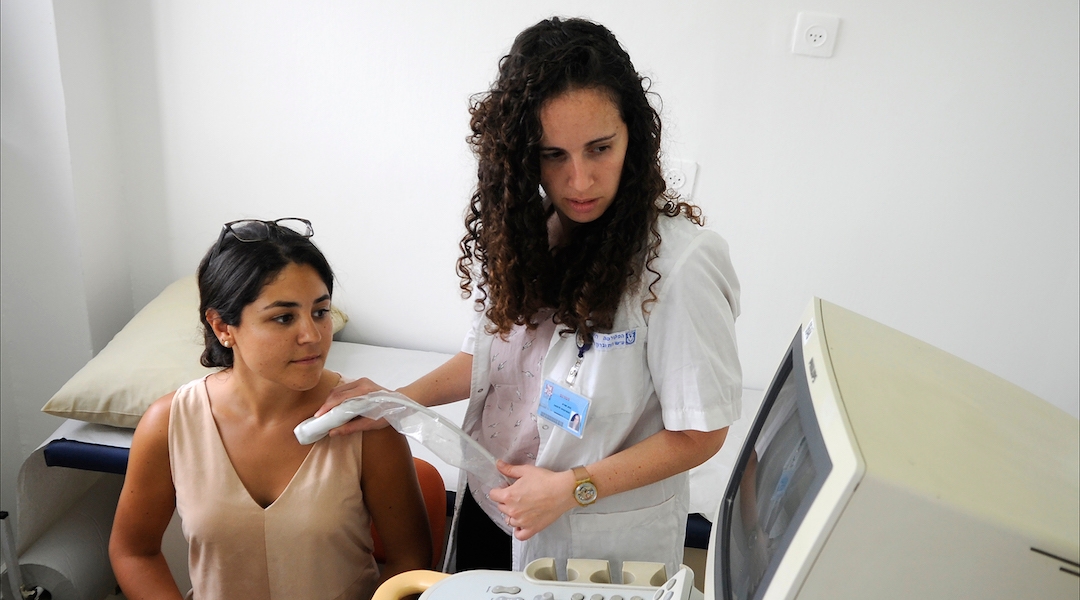 HAIFA — At the Ruach Tova Health Center in this northern Israeli city, three medical students are hard at work trying to keep up with the steady flow of patients.

This may look like a typical Israeli medical clinic, but it’s actually one of a kind: It’s the country’s only student-run clinic, and it’s free.

The clinic is located in a densely populated, relatively indigent neighborhood of Haifa called Hadar, and staffed with medical students and faculty from the Technion-Israel Institute of Technology.

“This is the first interprofessional kind of lab in Israel, where students learn with, from and about each other,” said the center’s director, Dr. Ruti Stashefsky-Margalit, a Detroit native who is now an associate professor and director of community engagement at the Technion’s Ruth and Bruce Rappaport Faculty of Medicine. “The Technion is investing in this to create a generation of students who think differently and engage in leadership even before they’re professionals.”

Narkis, 30, says the clinic – whose Hebrew name translates as “good spirits” — gives her a chance to practice her clinical skills.

“I do my daily rotation in a hospital, where I’m totally supervised,” Narkis said. “At the clinic, I’m responsible for doing patient intake, presenting patients to the doctor, concluding patients’ visits and making sure they’re getting the best treatments they can get.”

The clinic’s mission is to serve Haifa residents who, for one reason or other, may not have access to routine health care.

About half the center’s clientele are Israeli Arabs, followed by African migrants and asylum seekers living in Israel, mainly Eritreans and Sudanese. The rest are a mix of Russians, Palestinians living in Haifa and Ethiopian non-citizens. The clinic has a phalanx of interpreters who help work with patients who speak Arabic, Russian or the Ethiopian languages of Amharic and Tigrinya. 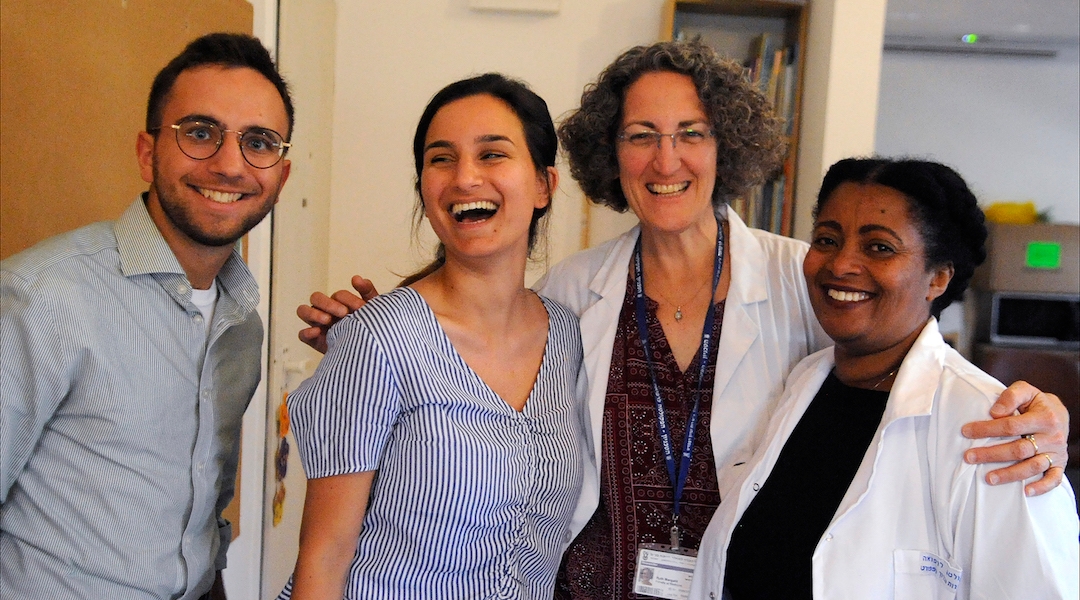 One Ukrainian patient is a victim of sex trafficking who was kidnapped off the street in Ukraine and forcibly brought to Israel. Now recovering from drugs and alcohol, she’s married to an Israeli and has a 9-year-old child, but no access to health care.

“Despite the Israeli system of socialized medicine, about 10,000 people in Haifa and its suburbs are either uninsured or underinsured,” Margalit said. “These people are really living in poverty, without access to health care, and they’re becoming a burden on emergency rooms.”

Since the clinic’s opening in February — 200 guests attended the lavish inauguration ceremony, which featured a 40-piece orchestra — about 70 students have volunteered at the clinic. It’s open two days a week for about four hours each day, and on Thursdays the center becomes an open studio where volunteers offer art therapy classes to women affected by domestic and sexual violence.

The most common problems treated at the clinic are diabetes, hypertension, mental health issues and post-traumatic stress disorder, according to Sagi. Patients also come in for treatment with infectious diseases and alcohol-related problems.

“It’s not urgent or emergency care, and we’re not suited to be an ER,” said Sagi, who is in her sixth year of medical school. By Margalit’s estimates, the clinic has prevented some 200 ER visits, each of which costs the equivalent of about $330.

That’s just a fringe benefit, however.

“Our goal is education first,” Margalit said. “Students are at the forefront of everything, and we — the professionals, experienced MDs —provide guidance and tight supervision. No one here enters or leaves without seeing a senior physician.” 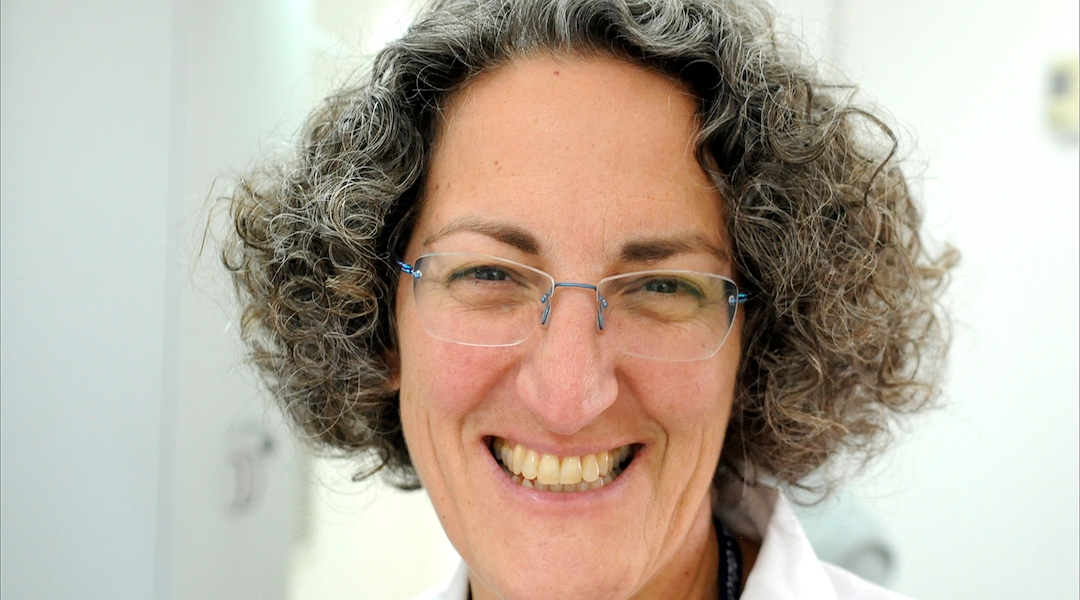 Rawi Naddaf, 24, a third-year med student from the Israeli Arab city of Nazareth, is crucial to the center’s operation. After meeting Margalit a year ago, the two brainstormed ways they could help Haifa’s underprivileged population.

“We started researching the aspects of a student-run health center, how it’s been done in the U.S. and Canada, and trying to figure out how to adapt it here for Israel,” Naddaf said.

Tenagnework Abay, an Ethiopian-Israeli Jew who volunteers at the clinic, is fluent in Hebrew, English, her native Amharic and Tigrinya, which is spoken in northern Ethiopia and Eritrea.

“Most of the Eritreans who come to our clinic are very happy to be here. Often they don’t understand Hebrew, and they don’t know which sickness they have or what medicines to take,” Abay said. “Here, when the doctor comes in, he introduces himself and shakes their hand. They’re not used to that.”

Ruach Tova opened with $55,000 in seed money from the Boston-based Ed and Barbara Shapiro Foundation, and the center has received thousands of dollars’ worth of donated hospital equipment from computer companies, private donors and even a dentist in Nazareth. But Margalit estimates that the operating costs will be about $500,000 per year.

With increased funding, Margalit hopes to open the center a third day a week and expand opening hours. She also wants dedicated rooms for dentistry, women’s health, family medicine and other specialized needs.

“We’re putting people back on the track to health, giving them hope without judging them,” Margalit said. “There’s a sense of respect and dignity here.”