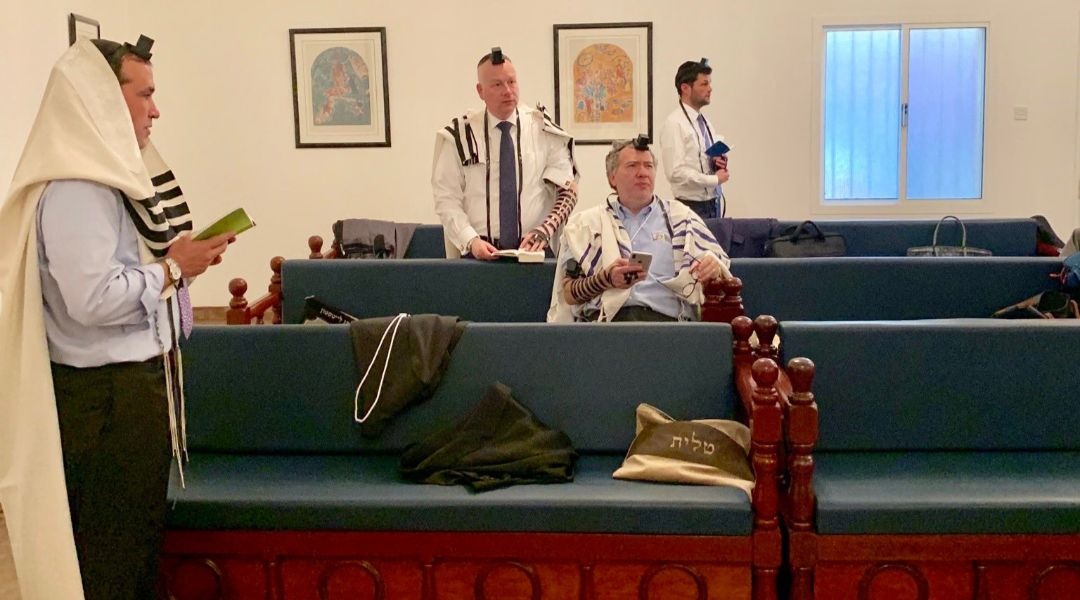 WASHINGTON (JTA) — Jason Greenblatt, President Donald Trump’s top Middle East negotiator, led Jewish prayer services at a synagogue in Bahrain this week during the conference there that rolled out the economic portion of the Trump administration’s peace plan.

Greenblatt mustered an Orthodox minyan — a quorum of ten adult Jewish males — for morning services Wednesday at the synagogue, which dates to the 19th century. Participants were among the businessmen, officials, journalists and think-tank employees attending the conference.

Houda Nonoo, the former Bahraini ambassador to the United States and a member of the country’s Jewish community of 35 or so people, said minyans were rare in the synagogue, tending to take place more at cemeteries and in people’s homes.

“It was an amazing experience to see everybody here together,” she told i24, an Israel-based news channel. She could not remember the last time the synagogue had shacharit, or the morning prayer service.

Greenblatt posted a picture of the service on Twitter.

“A special opportunity to daven (pray) this morning with a minyan (quorum) in a synagogue in Bahrain,” he said. “Great way to start today. I was asked what I prayed for — two things: my family, who I miss deeply and of course for peace. This is an example of the future we can all build together.”

The conference wrapped up on its second day without news of whether Jared Kushner, the peace team’s boss and President Donald Trump’s son-in-law, had extracted the $50-70 billion in pledges he is seeking to seed the infrastructural changes he says the Palestinian economy needs as a predicate for peace.

“The overall consensus is that this is a very executable plan if we’re able to get a political solution and if we have the right governing structure in place,” Kushner said in a video recapping the conference that the White House posted on Twitter.

The same day the conference opened, on Tuesday, officials of the United Nations Work and Relief Agency, which administers aid to Palestinian refugees and their descendants, garnered $113 million in pledges to help make up for the $360 million the Trump administration had cut in funding for the agency.

“I think the situation is extremely precarious when you think of a million people not receiving food assistance in Gaza,” UNRWA chief Pierre Krahenbuhl told the Associated Press.

The Bahrain conference, while inconclusive in its immediate goals — Kushner says he will roll out the political component of his plan later this year — was yet another signal of growing acceptance of Israel in the Arab world. Bahrain for the first time allowed Israeli journalists to enter to cover the conference.

Khalid bin Ahmed Al Khalifa, the Bahraini foreign minister, said that Israel was now a given in the region.

“Israel is part of this heritage of this whole region, historically,” the foreign minister said. “The Jewish people have a place amongst us.”

After 38 years, Jewish convict who helped 1,500 inmates earn degrees is released from prison