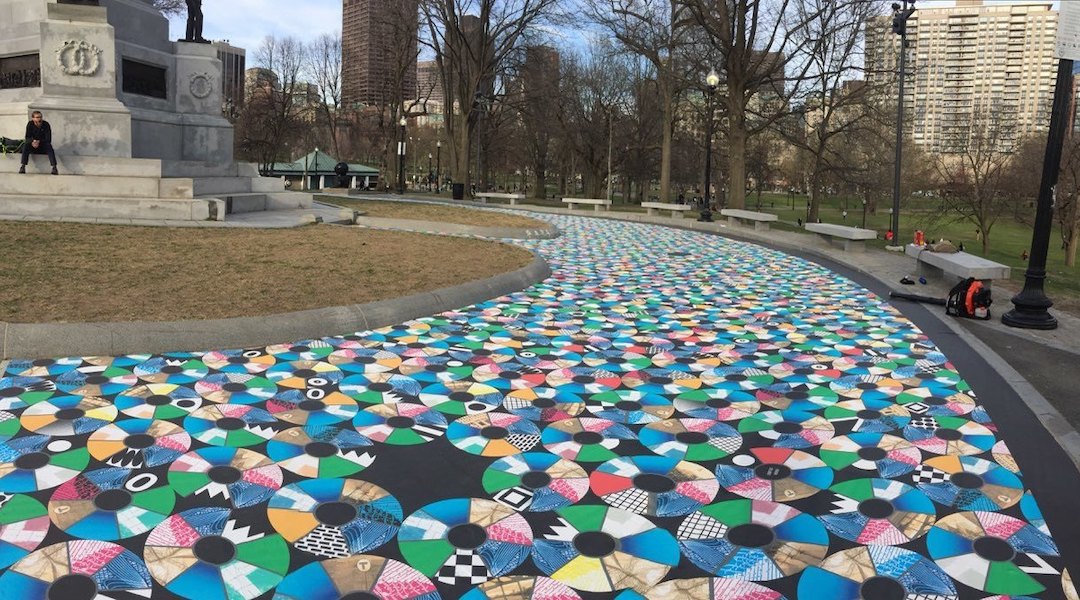 Julia Vogl's "Pathways to Freedom," commissioned by the Jewish Arts Collaborative, featured a mosaic of vinyl stickers that was mounted in the spring of 2018 in Boston Common. (Courtesy of JArts Boston)
Advertisement

BOSTON (JTA) — A Passover-themed work of public art produced by a Jewish arts and cultural organization here was named one of the country’s top 50 public arts installations by a leading arts and education advocacy group.

“Pathways to Freedom,” commissioned by Jewish Arts Collaborative, or JArts, was a large mosaic of vinyl stickers by Julia Vogl that was mounted in the spring of 2018 on Boston Common. More than 25,000 people, including school groups, college classes and tourists, visited the installation.

Americans for the Arts announced its Public Art Network‘s list of outstanding public arts projects on June 14 at its annual convention in Minneapolis.

More than 1,800 people at 28 locations participated in the JArts events by answering four questions about freedom on an electronic tablet. The responses, paired with icons, were printed instantly on small pie-shaped stickers placed on a personal disc.

Vogl, a London-based “social sculptor,” transformed the responses into colorful vinyl tiles. She then used the tiles to cover 5,000 square feet of pavement encircling the historic Sailors and Soldiers Monument.

The project was inspired by the universal themes of the Passover Exodus story and “aimed to be a catalyst for a larger conversation about freedom and immigration,” Vogl said in a JArts statement.

Laura Mandel, the executive director of JArts, said: “We knew this project would be important, but I don’t think any of us anticipated the deep and lasting impact of the seemingly simple 4 questions we asked and how meaningful it was for the many community organizations and individuals who participated.”