The protests by Ethiopian Israelis, explained 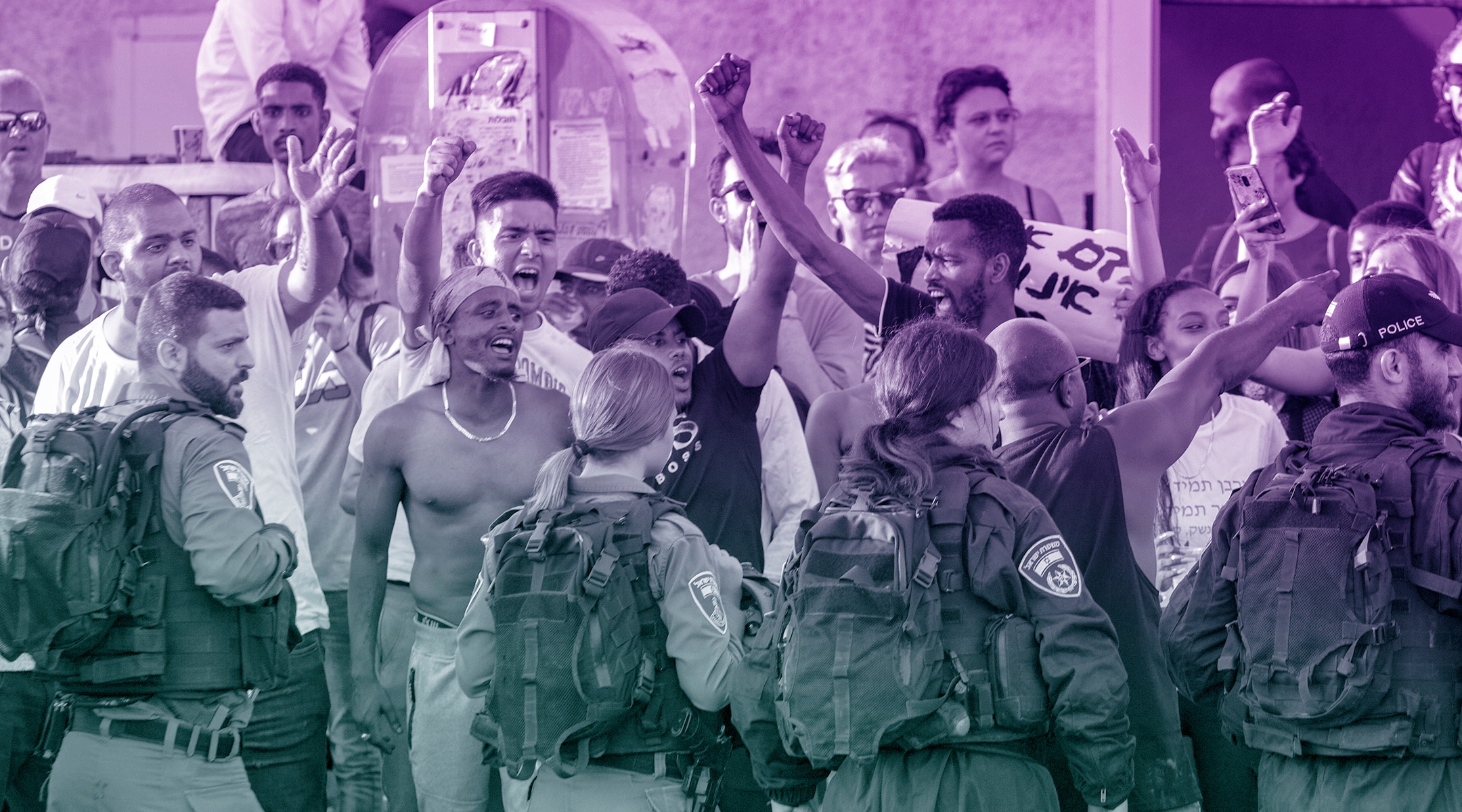 Ethiopians and supporters have protested across Israel against police violence following the death of a 19-year-old Ethiopian Israeli, Solomon Tekah, who was shot and killed by an off-duty police officer. Shown here is a protest in Kiryat Ata, July 3, 2019. (Flash90)
Advertisement

JERUSALEM (JTA) — Protests by the Ethiopian-Israeli community and their supporters entered a third day on Wednesday in Israel in the wake of the killing of an Ethiopian-Israeli teen by an off-duty police officer.

While the protests are tied to the death of Solomon Tekah, 19, on Sunday night in Kiryat Haim and charges of police violence, demonstrators say they are also about the racism that members of the Ethiopian-Israeli community are exposed to every day.

“We came here together — how can it all be destroyed? How did this thing happen to us? How are we different just because we are Ethiopian?” Tekah’s father, Worka, said in the eulogy for his son. “We respect the laws and customs. Why are we not respected? We have to live together. Enough! Let us be at peace.”

Ethiopian Israelis say they have long been discriminated against in housing, education and employment in large part due to the color of their skin.

Here’s what we know:

A brawl, a shooting, unrest

The officer who shot Tekah told investigators that he was walking to a local park with his wife and three children when he came upon teens involved in a street brawl. He said he made it clear that he was a police officer and the teens then began throwing stones at him. The officer, whose name was not released, said he felt that his life was threatened and aimed at the ground when he fired his service revolver. The police believe the bullet ricocheted off the ground and struck Tekah in the chest.

The Israeli media is reporting that police are getting ready to charge the officer with negligent homicide, a lesser charge than manslaughter, since it does not appear that he intended to kill the teen.

Even before Wednesday’s protests started, 136 protesters already had been detained and 83 protesters and police officers were injured during demonstrations the day before that blocked major intersections across the country, especially in Tel Aviv. Some of the protests became violent, and police and the media reported rock throwing, firebombs and burning tires. Police used riot dispersal methods in some cases to remove the protesters, but also tried to keep a low profile elsewhere to prevent clashes.

The protests on Wednesday were less intense after the Tekah family called in a statement for “just and legitimate protests in an organized fashion … without disrupting public order, certainly without violence,” to begin at the end of the shiva mourning period on Sunday.

Not the first time

Solomon Tekah’s killing comes six months after Yehuda Biadga, 24, a mentally ill Ethiopian Israeli, was shot and killed by police who say he charged an officer while brandishing a knife. His death led to demonstrations throughout Tel Aviv.

In May 2015, similar protests erupted following the beating of an Ethiopian-Israeli soldier by two police officers that was filmed and widely distributed. Those protests degenerated into riots in which police officers fired stun grenades, water cannons and tear gas to disperse the demonstrators, who threw rocks and glass bottles at police, and also vandalized some storefronts. 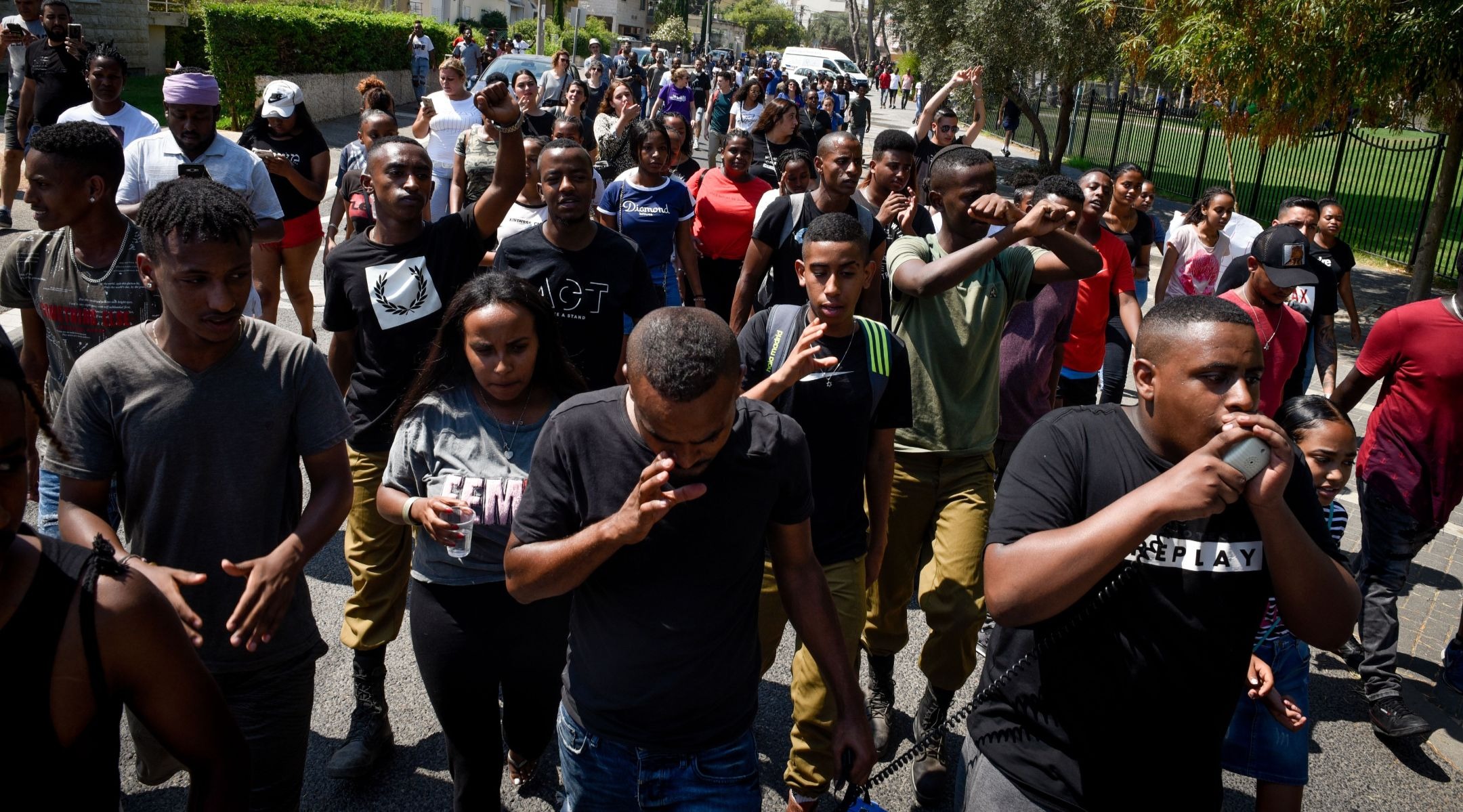 Ethiopian-Israelis protest on July 1, 2019 following the death of 19-year-old Solomon Tekah, who was shot the previous day by an off-duty police officer in a Haifa suburb. (Meir Vaknin/Flash90)

More than 144,000 Jews of Ethiopian descent are living in Israel. They or their parents and grandparents arrived in two main waves: in 1984 with Operation Moses and in 1991 with Operation Solomon. Most arrived with the clothes on their backs. They did not speak the language. They had to try to integrate into an entirely new culture.

According to figures compiled by the Myers-JDC-Brookdale Institute, education levels and employment in the Ethiopian community has improved significantly, though gaps with the general population remain. For example, general matriculation rates for Ethiopian Israelis (a measure of college readiness) rose to 55 percent in 2016 from 38 percent in 2000, though the general Jewish student population stands at 77 percent. Between 2000 and 2016, employment rates for Ethiopian men aged 22-64 rose to 80 percent from 63 percent, compared to 81 percent in the general male Jewish population, and soared to 74 percent from 37 percent for women, compared to 80 percent for all Jewish women.

Israelis are proud of the rescue of Ethiopians and their integration into society.

“It is difficult to find instances in history where one country spirited Africans out of their native continent not to sell them into slavery, but rather to bring them to freedom,” The Jerusalem Post’s Herb Keinon wrote Wednesday. “Yet that is precisely what Israel did with the rescue of Ethiopian Jewry via Operation Moses and Operation Solomon in the last century. In the process, Israel has spent hundreds of billions of shekels to house, educate and train the immigrants. The amount of money the social welfare departments in local municipalities spend each year on Ethiopian immigrants is tremendous. And it has had an effect.”

Others insist, however, that the dollars spent and the statistics don’t tell the whole story.

“The Ethiopian community’s protest is justifiably directed at the police, but the blame for the fact that even the second generation of Ethiopian immigrants is having a hard time assimilating into Israeli society lies with the government and the one who heads it,” the lead editorial in Haaretz countered. “So long as this issue isn’t made a national priority, it will continue to claim victims.”

Many have called Solomon Tekah’s death a symptom of the racism that is deeply rooted in Israeli society and its police force. They cite as proof a 2016 statement by former police chief Roni Alsheich, who said it was “natural” for his police officers to be more suspicious of Ethiopian Israelis than of other Israelis.

“You say to yourself, OK, it happened once but won’t happen again,” a young woman from Nes Ziona in central Israel told The Jerusalem Post. “The next time it happens you think, OK, maybe they’ll fix it. But when it becomes systematic, you think to yourself are our lives worth less?”

President Reuven Rivlin called for a halt to this week’s violence and for Israelis to regroup and figure out how to deal with the crisis together.

“We must stop, I repeat, stop — and think together how we go on from here. This is not a civil war,” he said. “It is a shared struggle of brothers and sisters for their shared home and their shared future. I ask of all of us to act responsibly and with moderation.

“We are brothers and sisters. We came here, all of us, to our homeland, which is home for every one of us, and we are all equal in it. We will fight for our values and we will fight to ensure a safe future for every child that grows up here. We will not accept a situation in which parents are afraid to let their children out of the house for fear of being hurt because of the color of their skin or their ethnic origin.”