The Chabad Rebbe died 25 years ago. Here’s how his movement has survived. 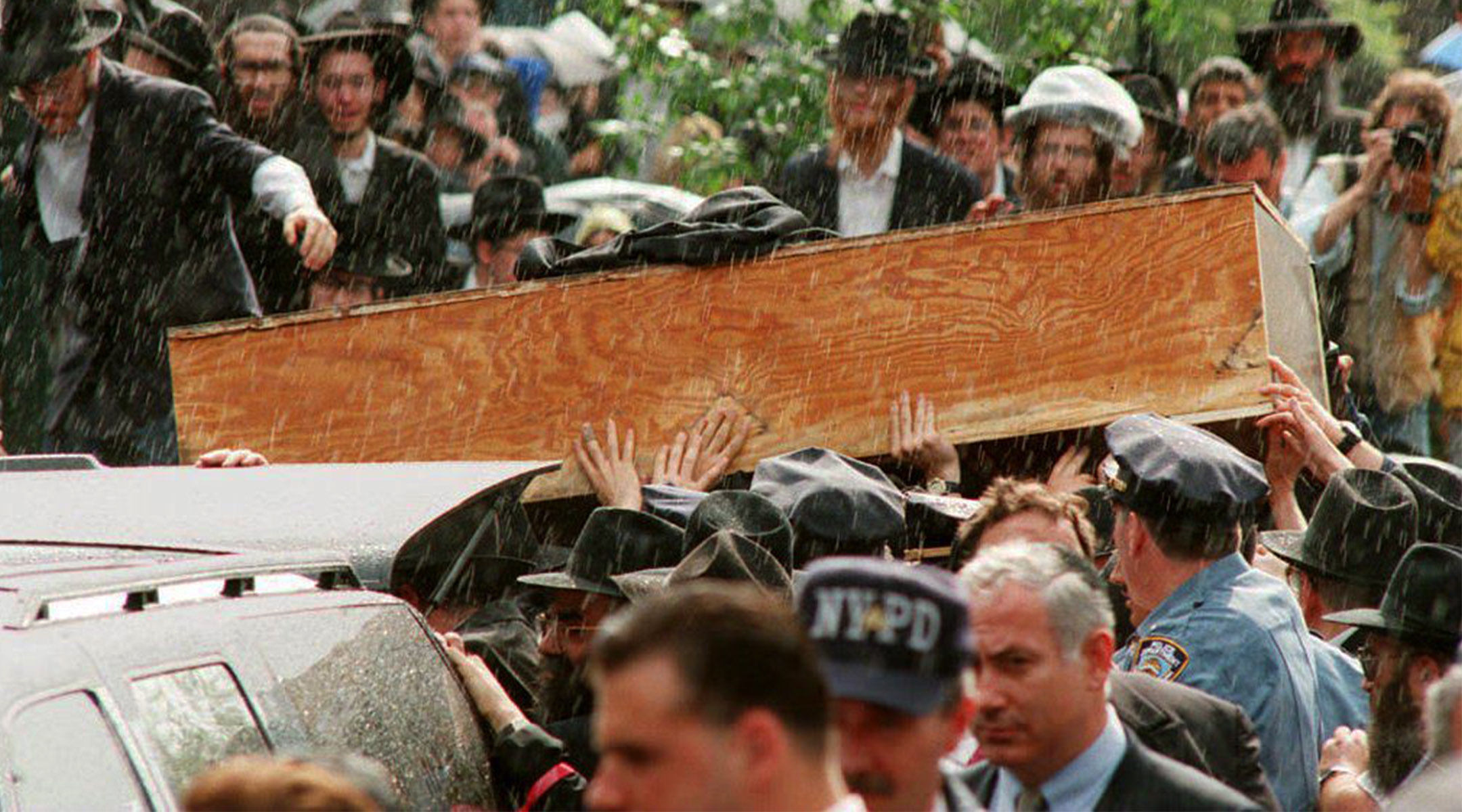 Hands reach out to touch the casket of Rabbi Menachem Schneerson as his funeral procession prepares to leave the world headquarters of the Lubavitch Hasidim in the Crown Heights section of Brooklyn, June 12, 1994. (Mark Phillips/AFP/Getty Images)
Advertisement

JERUSALEM (JTA) –Twenty-five years ago, Menachem Mendel Schneerson, the 92-year-old Lubavitcher Rebbe, succumbed to his many ailments and died, to the horror of his Hasidim.

Since suffering the first of several devastating strokes on March 2, 1992, while visiting the grave of his late father-in-law and predecessor Rabbi Yosef Yitzchak Schneersohn, the Rebbe had been trapped speechless and physically disabled in a failing body. He was widowed and childless, and his Hasidic aides, who now controlled his every move, as well as his followers had become whipped up by his frenzied “Moshiach Campaign,” a movement to arouse messianic fervor among world Jewry – which many Hasidim were convinced would result in their Rebbe’s revelation that he was in fact that long-awaited Messiah himself.

As their Rebbe lay dying in New York’s Beth Israel Hospital, Hasidim signed petitions to God to permit their Rebbe to rise from his deathbed and lead Jewry to the messianic age. They carried beepers set to go off and signal them when he revealed himself as Messiah, as they were convinced he would. They debated how he would lead them to the Promised Land. His death left them in a quandary: The Moshiach Campaign had promoted the idea that the Rebbe was leading Jewry to the Day of Redemption. But with him dead, it seemed the prophecy had failed.

At the time, many observers were convinced that the Rebbe’s demise would spell the diminution and decline of his Hasidic movement, particularly because he had left no successor. The movement he had helped resurrect after its post-Holocaust re-establishment in New York seemed at a dead end.

This was a huge shock to a relatively small group of Hasidim who had, under his charismatic leadership, rocketed to fame in America and the broader Jewish world. Thousands of emissaries, or shluchim, at the Rebbe’s urging had established Chabad houses and centers throughout the world, ministering to marginally engaged Jews as well as to Jewish travelers.

Twenty-five years later, the redemptive arrival of the Messiah seems even further away, as anti-Semitism raises its head again and fewer Jews than ever are attracted to the ultra-Orthodox Jewish life that Lubavitch espouses. While the campaign for the Moshiach continues, the accompanying frenzy and excitement that was its distinguishing feature in those final years of the Rebbe’s life is largely diminished. It has simply become another slogan of the Lubavitch brand of outreach. But Lubavitch and the Chabad movement has not disappeared. What happened?

We sociologists have three concepts that offer an answer. The first is cognitive dissonance.

The term comes from the famous study “When Prophecy Fails,” which examined a cult of believers who had to come to terms with the fact that a powerfully held belief about the future failed to come true. The study found that groups that must confront the dissonance between their belief and disconfirming reality actually respond by stubbornly holding onto their beliefs and trying even harder to convince others of its truth. In the process, they also worked to convince themselves that their belief is still true and eventually will be fulfilled.

In the case of the Lubavitchers, the demise of their Rebbe led to even more posters and actions announcing his imminent arrival as the Messiah. In Israel, huge billboards with Schneerson’s image under the word Messiah are still everywhere, from the airport to the Ayalon Expressway leading to Tel Aviv and Lag b’Omer celebrations in Meron. The Lubavitcher Mitzvah Tanks in New York still are emblazoned with the Rebbe’s likeness and the word Moshiach. Annual ads in Jewish papers announce his imminent arrival.  The yellow Moshiach flags still fly in Crown Heights. In Lubavitch homes around the world, it’s common to face a portrait of the Rebbe looking down sternly on the dinner table or study. The campaign lives on.

The two other reasons Chabad continues to be successful is routinization and institutionalization. What was once unusual – an expression of its leader’s charisma and unique energy – has become routine and a predictable part of the way the institution operates.

The Messiah campaign and the Rebbe’s image have become a kind of trademark, like Colonel Sanders of Kentucky Fried Chicken. But while the latter is selling fast food, the Rebbe image is promoting Schneerson’s vision of yiddishkeit and trying to persuade the population to taste what Chabad has to offer.

The number of Chabad shluchim has continued to grow since 1994. When their Rebbe lived, his Hasidim all wanted to be close to him in Crown Heights, Brooklyn. Now they all want to go on the road because they can take him along wherever they go. As long as they are his emissaries and on a mission for him, all they do keeps the Rebbe and his vision alive.

As the Lubavitchers point out, a shaliach is, according to Jewish law, an extension of the one who sent him. Each Chabad house around the world runs similar programs, and every emissary is like a version of the Rebbe for those who are served by it. Of course, most of those who walk into those Chabad houses are neither Hasidic nor even Orthodox, and not likely to become either.

To be sure, what today’s Lubavitchers lack is a single leader who can control any deviance in the movement or offer something new and exciting. Occasionally this leads to some internal tensions. Perhaps the most famous is the ongoing controversy over Shmuley Boteach. Once the shaliach of the Oxford Chabad House, he was removed in 1994 because some Lubavitchers felt he was acting inappropriately. His status in Chabad continues to be a matter of controversy. Were the Rebbe alive, Boteach’s standing would have been firmly settled by the leader, as would the ongoing debates about him or what is or is not appropriate conduct for a shaliach.

Similarly, the continuing arguments over whether Lubavitchers should read Menachem Friedman’s and my biography of the Rebbe would have been resolved by a living Rebbe as well.

Instead, Lubavitchers these days mostly live off their leader’s past and hope for a messianic future while their virtual Rebbe is literally on reruns, his image on video on the internet or on a loop in Chabad centers across the world. Today, as the flier in my Jerusalem mailbox this morning put it, that Rebbe is presented as “Everyone’s Rebbe.”

At the same time, when Lubavitchers want his guidance or seek a specific message from him, they often open a link or a volume of his letters or talks, using bibliomancy to get personal  messages from him, as if they have opened the book by some secret force from the beyond and need only find their answers on the page. (And if they don’t find what they want, some are happy to close and open the book to a better page.)

As for a dead Messiah, that has its advantages, too. Living Messiahs can get sick, lose their speech, make mistakes – they are, after all, only human. But a dead Messiah is beyond such infirmities and past all human frailties; as the Lubavitcher broadside Sichat HaShavua put it this week, the third of Tammuz is the day “the Rebbe ascended beyond all the limitations of this world.”

Freed from his mortal bonds, the Rebbe can act with greater power, be all things to all people and bring the redemption. And so, while many Lubavitchers at this time of year routinely repeat their feelings of loss and how much they miss their Rebbe’s presence, they celebrate the day by convincing themselves that he lives in and through them – and thus he has given them the strength to continue. The beat goes on.

I grew up Hasidic. I’m now a skeptic. I still believe in the Rebbe anyway.