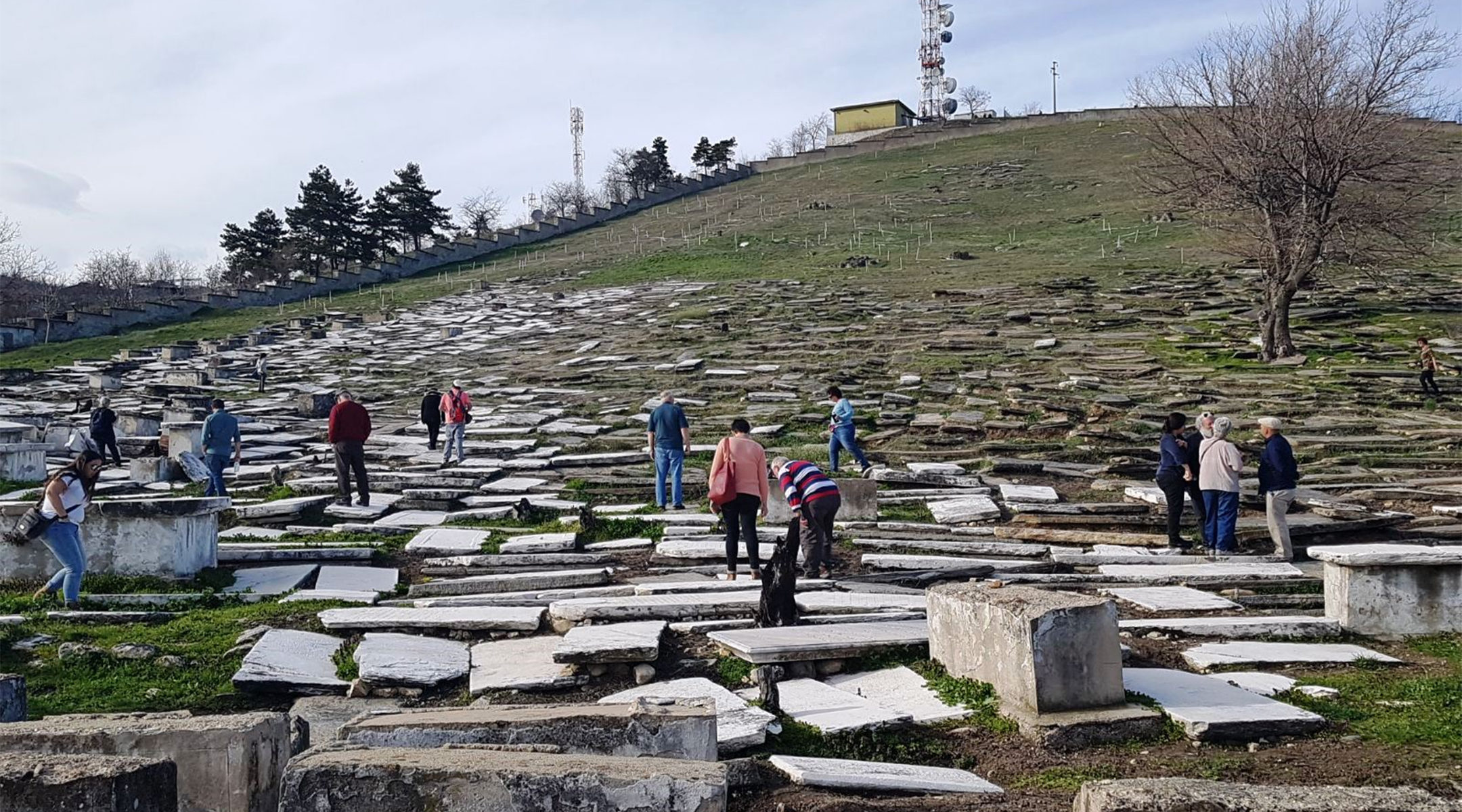 BITOLA, North Macedonia (JTA) — In a country where Nazis killed 98 percent of its Jewish minority, the survival of five members from the Abravanel family was regarded as something akin to a miracle.

As more than 120 of their relatives were shipped to the Treblinka death camp, the family was spared because of a set of unusual circumstances, including a typhus outbreak. Four of the five family members were physicians. The Nazis and the Bulgarian occupation forces needed all the help they could get to curb the outbreak in North Macedonia, a former part of Yugoslavia that is today a landlocked nation north of Greece.

Eighteen years after World War II, though, tragedy caught up with the Abravanels. Three of the five survivors were killed in the 1963 earthquake that devastated Skopje, now the capital of North Macedonia. The only survivors were an elderly couple and their 7-year-old granddaughter. 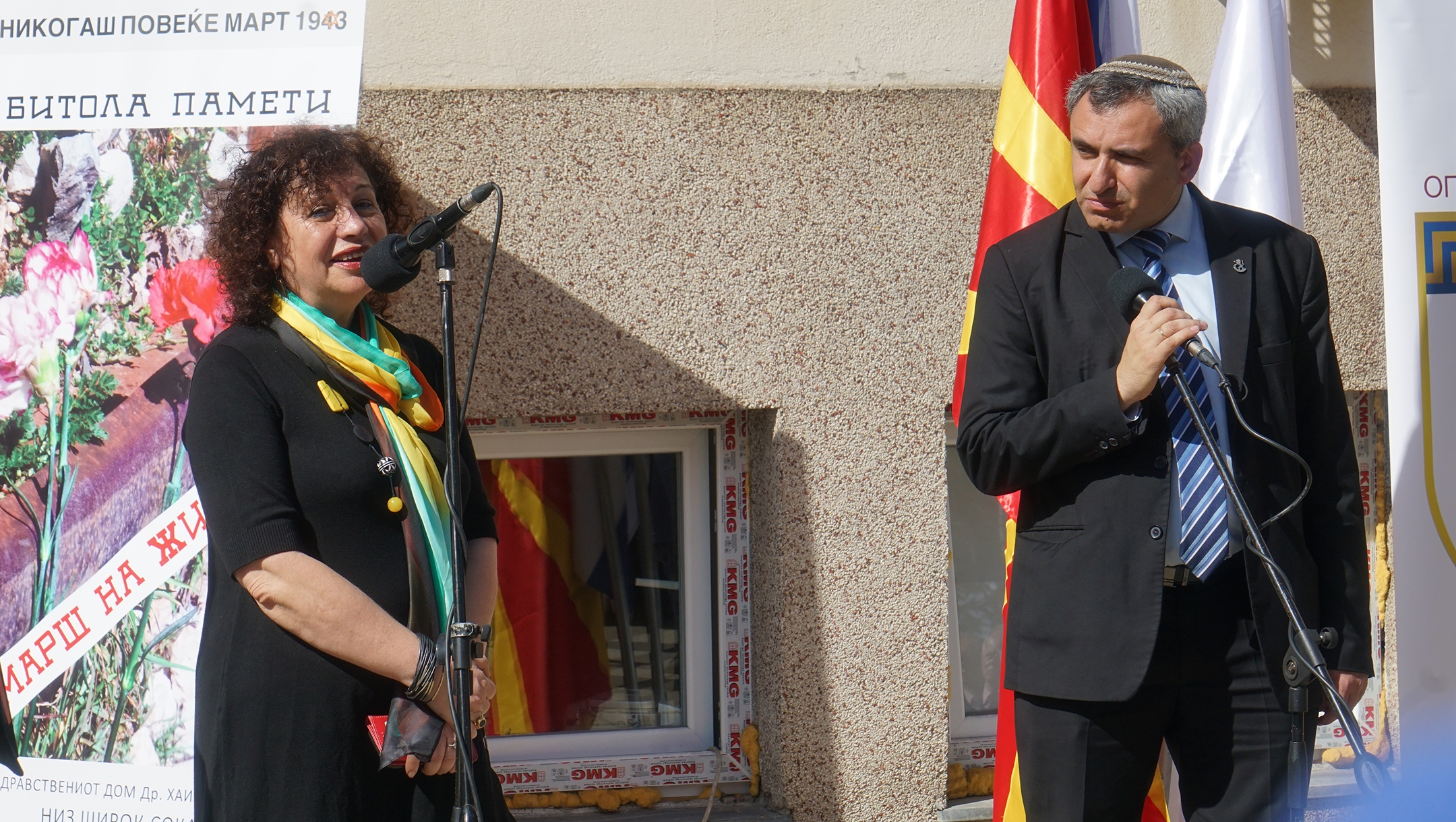 The surviving couple, Haim and Berta Abravanel, lost their son, daughter and son-in-law in the calamity. Their granddaughter, Rachel Shelley Levi-Drummer, lost both her parents, an uncle and her home during the earthquake. She immigrated to Israel with her grandparents, broken and hollowed by their loss, soon after the earthquake struck. Many view their departure as the end of centuries of Jewish presence in Bitola.

But more than half a century after that tragic end, Levi-Drummer and others are returning to Bitola — the modern name of the city once known as Monastir — through several successful projects that are lifting out of oblivion the nearly extinct Jewish community of North Macedonia.

In March, the permanent display of a multi-million dollar Holocaust museum — the Holocaust Memorial Center for the Jews of North Macedonia — was inaugurated in Skopje. It contains rare items such as a German tank engine like the ones whose fumes were used to kill Jews and prisoners of wars, and wagon carts like the ones used to ship Macedonian Jews to their deaths. 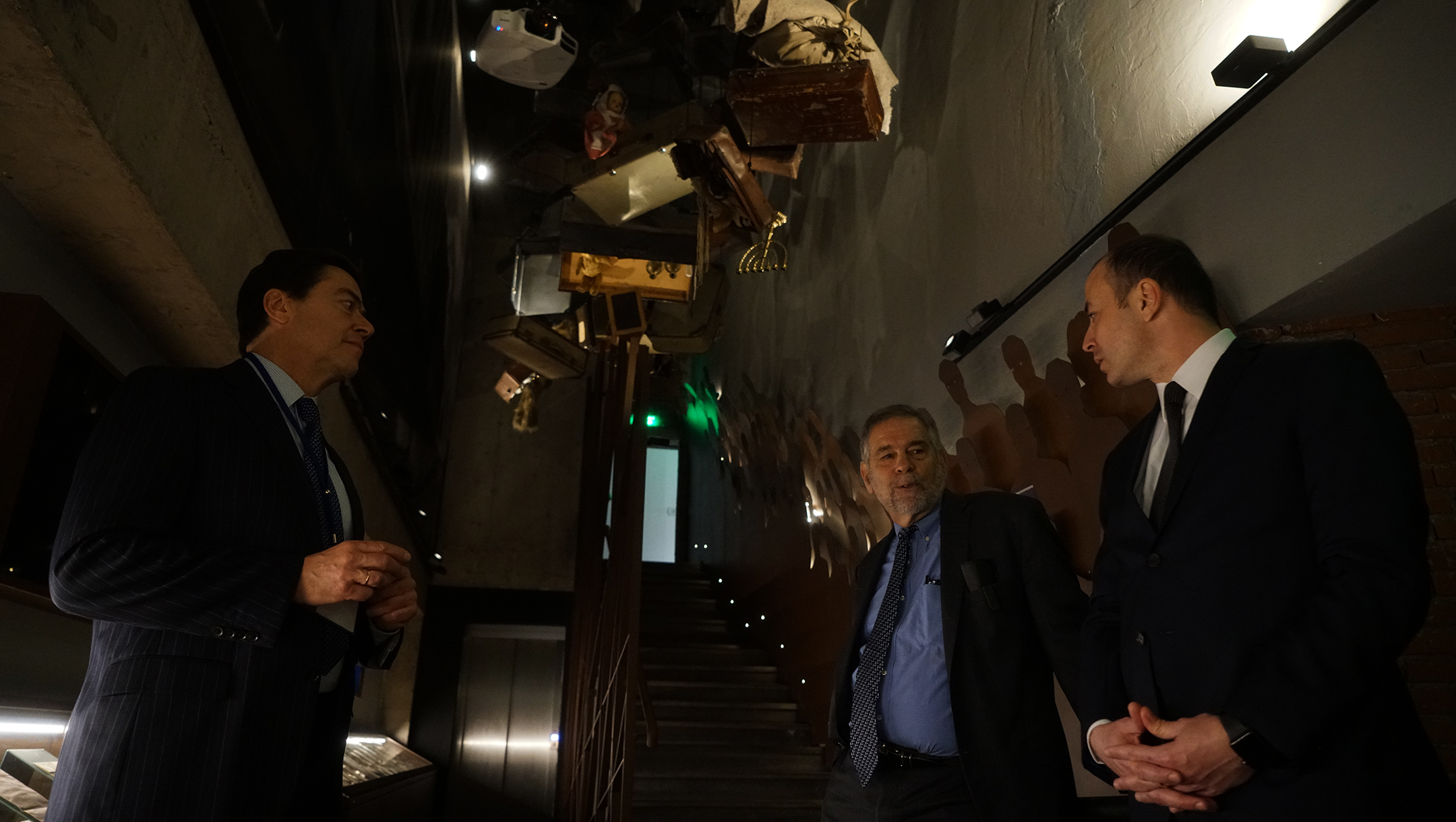 The museum also has scrolls with the names of 7,144 Macedonian Holocaust victims, of whom only about 150 survived. The Jewish community of Bitola, North Macedonia’s second-largest city, had an even lower survival than the national one: Only one and a half percent of Bitola’s 3,400-odd Jews survived.

In 2015, Levi-Drummer, now the academic secretary of Israel’s Bar Ilan University, and Dan Oryan, Israel’s ambassador to North Macedonia, along with others began a project to clean up Bitola’s Jewish cemetery — an 11-acre hillside whose gate boasts an impressive arch, but that essentially had been used as a waste dump before 2015.

Oryan’s involvement in the case is unusual — Israeli ambassadors focus on bilateral ties and very few of them take an active lead in restoring Jewish heritage.

But “there was an amazing, heartrending story that needed to be told here,” said Oryan, whom both Levi-Drummer and Balashnikov credited with a seminal role in restoring Bitola’s Jewish cemetery.

As for Levi-Drummer, her orphanhood to a large degree made her return to Bitola, where her grandfather ran a large hospital, she told the Jewish Telegraphic Agency. Following the earthquake, “my grandparents and I were the only branch left standing on this enormous fallen tree,” she said. “My memories, roots and what used to be my home brought me back here.”

Levi-Drummer was scheduled to be in Skopje with her parents when the 1963 earthquake struck, on July 26. But her grandmother, Berta, kept her a day later than planned in Bitola because she had not finished making a dress for her granddaughter. Her grandparents did not immediately tell her about the earthquake as her grandfather searched for her parents and his son.

He and other diggers found their bodies under a totally collapsed building. He had them shipped to Israel for burial.

Currently, cleaners at the Bitola Jewish cemetery have unearthed only 40 percent of its estimated 10,000 headstones – weather-resistant slabs of stone, some of them dating back to the 15th century, that were placed flat on the ground in the Sephardic tradition.

The headstones turned out to be unusual in other ways, too. Instead of the terse epitaphs characteristic of Jewish tombstones today, the ones unearthed in Bitola contained rich descriptions and even poems about the deceased.

This verbosity isn’t unique to Bitola: It can be found in various Sephardic Jewish cemeteries, including ones in Hamburg, Germany and even as far east as present-day Ukraine.

But in Bitola’s case, these epitaphs became the only source of information about victims who perished in obscurity.

Bela Balashnikov, 76, learned in 2015 the only information she has about her great-grandfather, Matityahu Shmaya Zarfati, from an epitaph exposed in the cleanup. 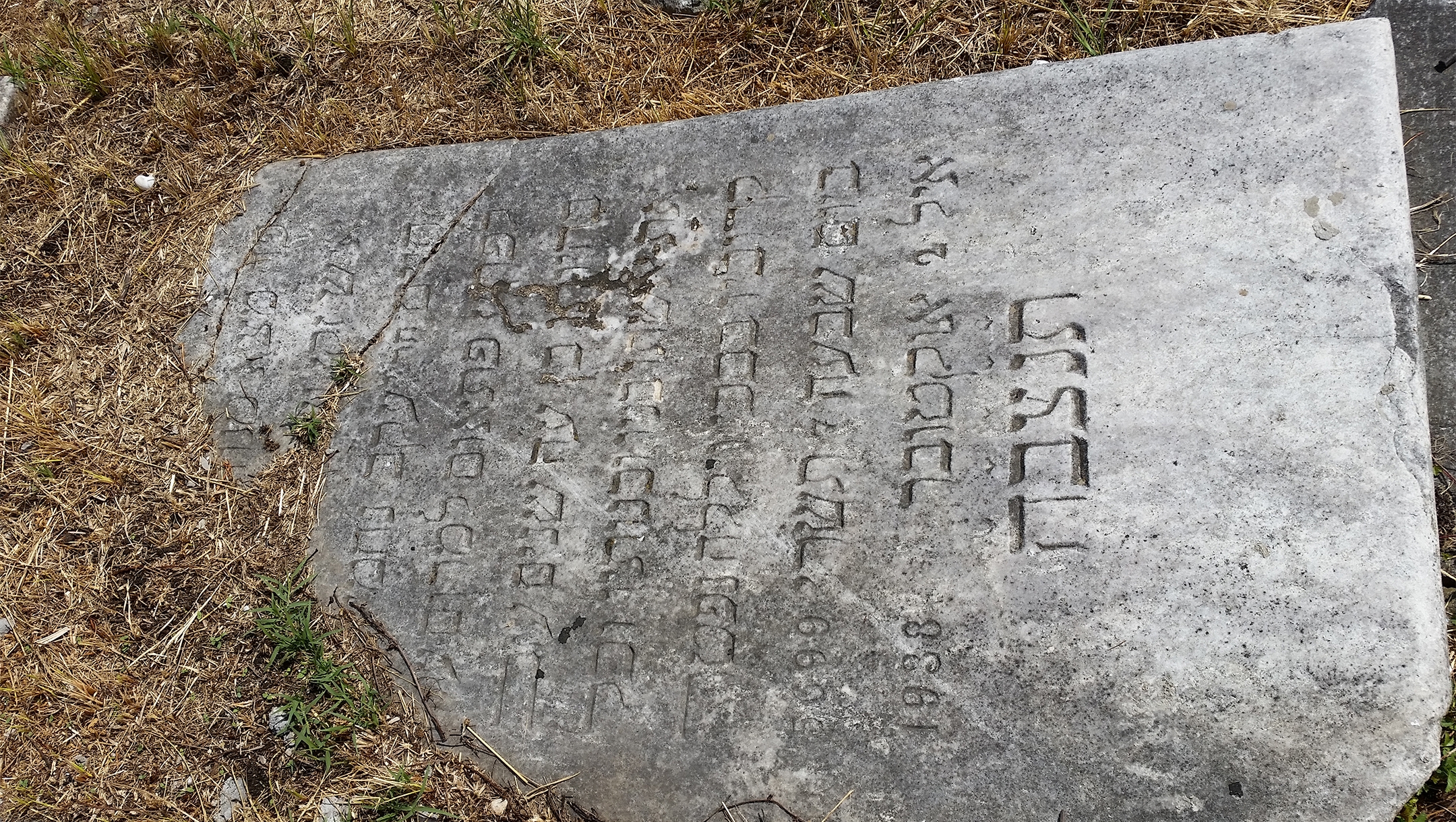 A headstone at the Jewish cemetery of Bitola, North Macedonia pictured on Aug. 7, 2015. Wikimdeia/Liad Malone)

“I was so moved to learn that he was a donor to communal causes, that he cared about the poor, that he was a learned man,” said Balashnikov, whose Zionist parents escaped the Holocaust when they moved to pre-state Israel in 1932. “Before the cleanup, I knew only his name. My parents wouldn’t speak of the people they lost. It was too painful.”

His poetic Hebrew epitaph from 1901, featuring Aramaic and written in rhymes, reads: “Inside this lump of earth lies a man of great descent … who studied the Talmud and Torah, the good and honest, his hands were never without a book. Then came the Angel of death before the due date and left his wife and sons bereaved. He died in the prime of his life.”

Another epitaph, of Esther Calderon who died in 1891, noted in remarkable candor that she had visited Jerusalem twice and tried to live there but never acclimated. She then returned to Bitola to live out her life in penury, the text says.

According to Levi-Drummer, this openness is typical of the Jews of Bitola, which is today a quiet and ornate city with a developed café culture but few tourists.

“It was a warm Sephardic community with a lot tolerance that basically functioned like an extended family,” she said of Bitola’s Jews.

According to Balashnikov, matriarchs, rather than men, had the ultimate say in many Jewish families in Bitola.

None of the Bitola community’s buildings — it had several synagogues — survived World War II and the subsequent communist rule when North Macedonia was part of Yugoslavia.

The sudden and radical annihilation of Macedonian Jewry — within days, the Nazis achieved there their highest death rate anywhere — represents an unusual challenge for activists seeking to preserve the memory of this extinct community, which is believed to have settled in Bitola not later than the 3rd century CE.

“Family lore was lost because whole families were executed together,” Levi-Drummer said.

The pain of the loss was so traumatic that it made the few survivors suppress their communal memories, she added.

Michael Bar-Zohar, an Israeli Bulgaria-born historian, lamented the obscurity of Macedonian Jewry in his 1998 book, ”The Trains Left Empty.”

The area’s Jews “became victims for the second time after their death,” he wrote. “Their sacrifice and suffering were washed in waves of cold indifference. Their memory had been erased as though they had never lived on the golden shores of the Aegean Sea or in the green valleys of turbulent Macedonia. In life and death, they were the orphans of the Balkans.”

Bar-Zohar’s account isn’t entirely accurate, according to Hassan Jasari, a Muslim from Bitola who says his late uncle risked his life to bring water to Jews awaiting their deportation. Hassan Jasari participates each year in the annual March of the Living Holocaust commemoration event in Bitola. Pointing at the Israeli flags of other participants of the event in March, he said, “It’s great to see this flag waving here, of the greatest country on Earth.” 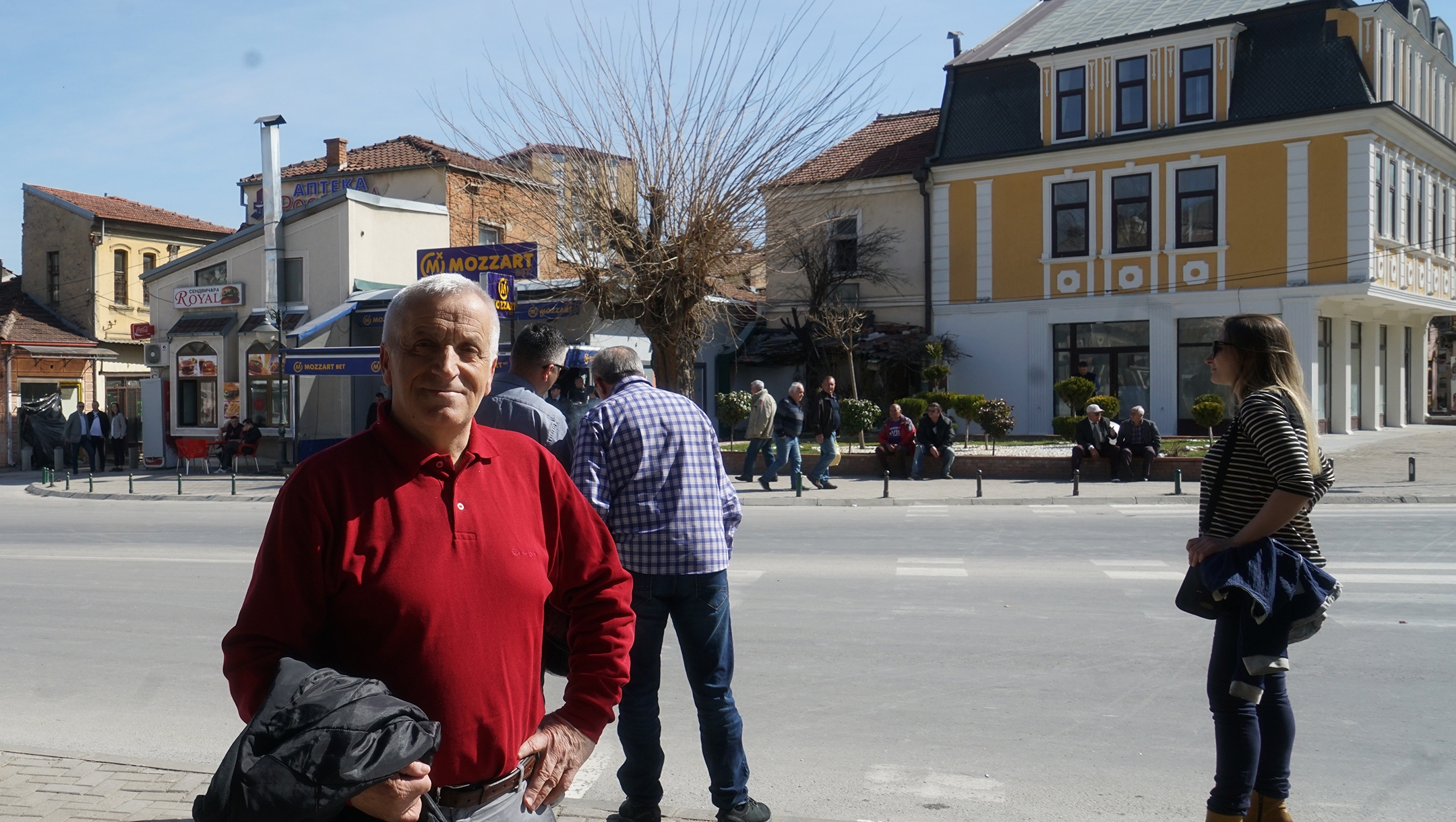 Macedonia’s Jews were detained without food or water for about three days at a disused tobacco factory before being transported for days by train to Nazi-occupied Poland.

“By the time they arrived at Treblinka, they were probably eager to cram into that gas chamber believing it was a shower where they could drink and wash away the filth they had been forced to live in,” said Balashnikov, who lost several uncles there.

Levi-Drummer, Balashnikov and others interviewed for this article believe that the Abravanels were “the last Jewish family who left Bitola.”

Yet Bitola is currently home to Maria Behar, 60, and her son, Zoran. She said they are the last Jews living in Bitola – and they are preparing to leave for Israel following the death of her late husband. He is not buried at a Jewish cemetery. Additionally, an Israeli family recently moved to Bitola, where they have businesses. 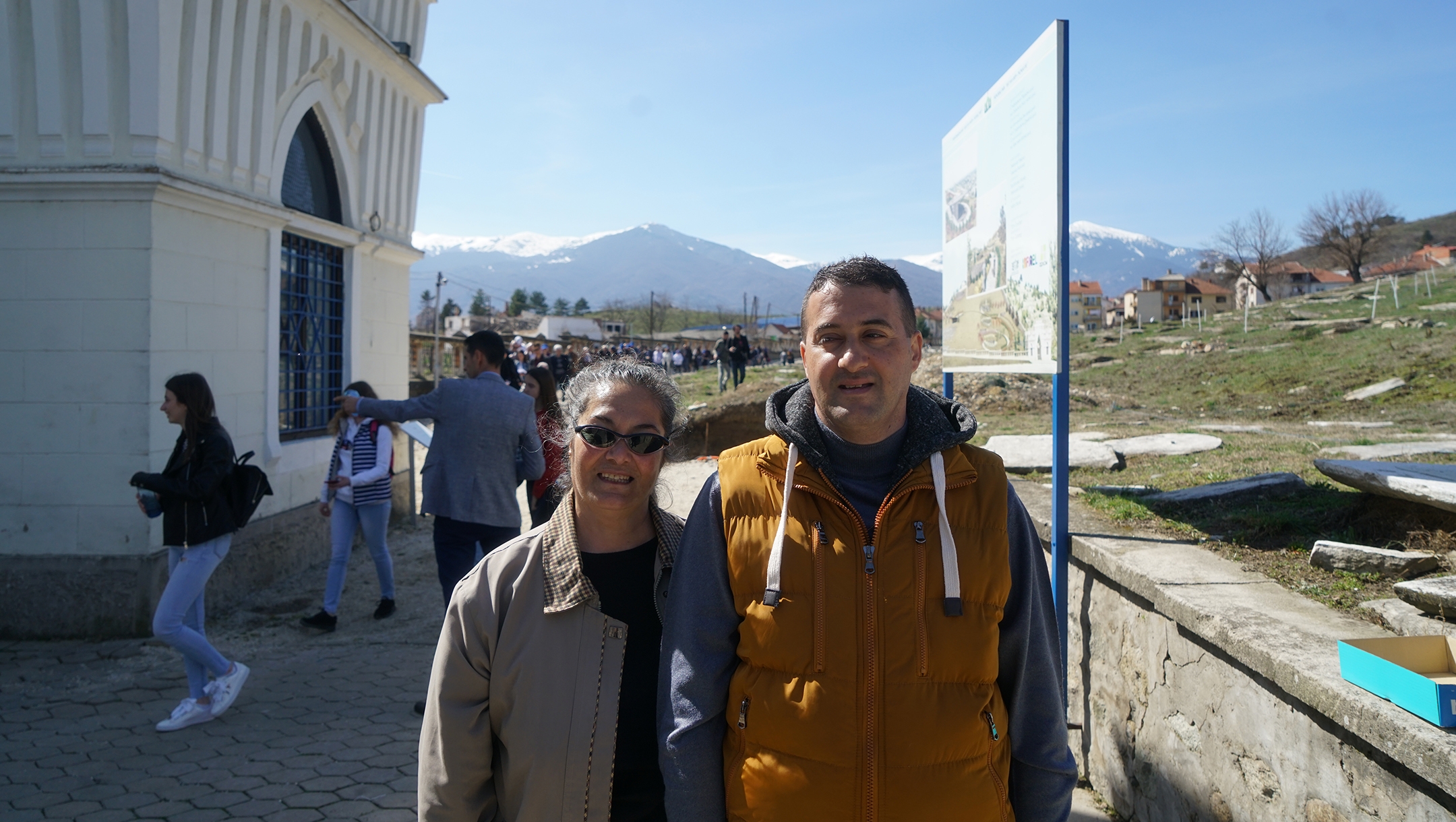 Notwithstanding, Balashnikov and others agree that “the Jewish community of Bitola no longer exists, and will probably never return,” she said. “At least now the world knows a little more that they even ever existed.”