These Jews called out AOC over her use of ‘concentration camps.’ Here’s what they think about the detention centers. 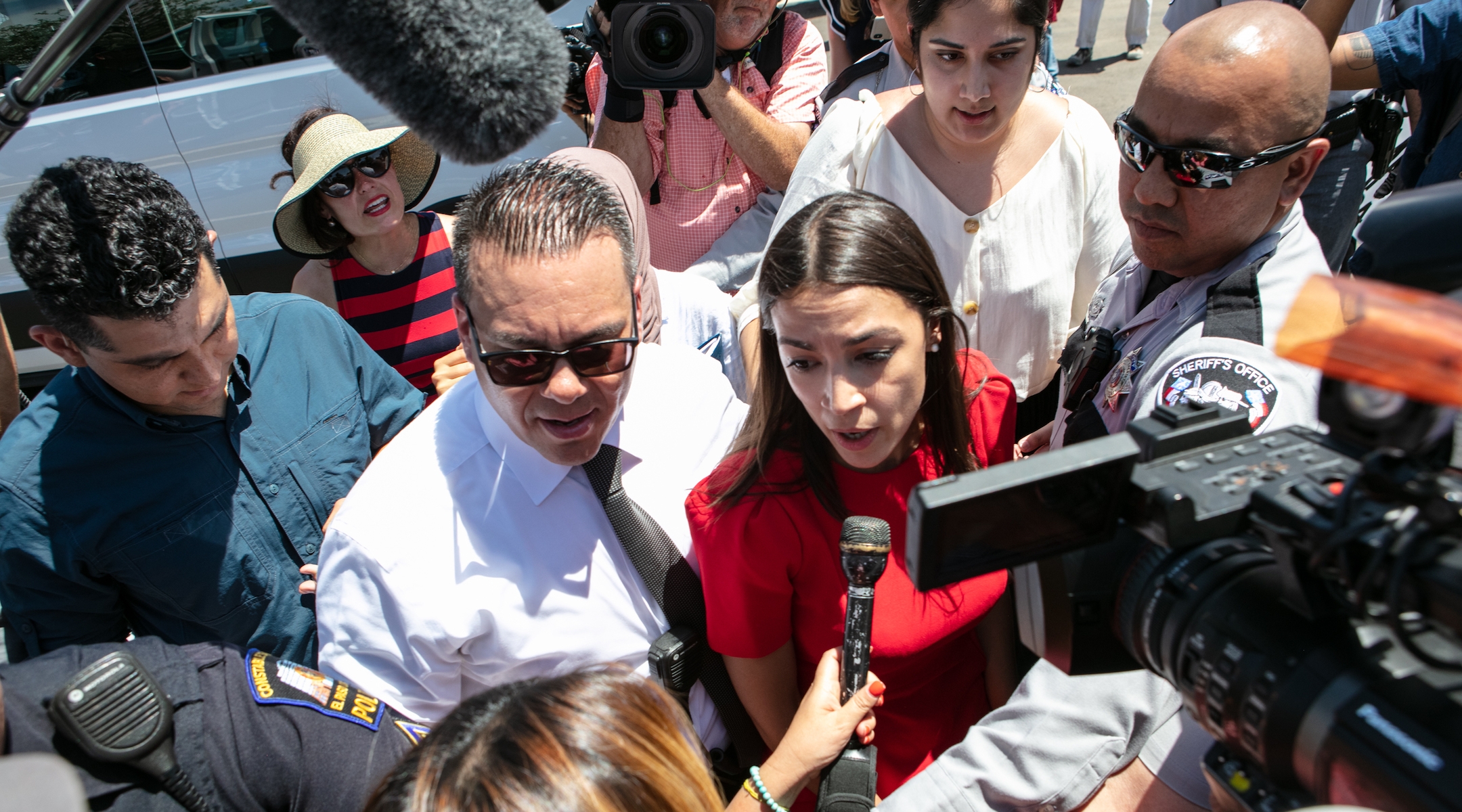 Rep. Alexandria Ocasio-Cortez speaks to the media after visiting the detention facility in Clint, Texas on July 1. Those who condemned her for calling it a concentration camp are split on condemning the conditions at the facility. (Christ Chavez/Getty Images)
Advertisement

But how did they weigh in on the conditions at the detention centers themselves?

A little background: A few weeks ago, Ocasio-Cortez, the freshman Democratic New York congresswoman, tweeted “This administration has established concentration camps on the southern border of the United States for immigrants, where they are being brutalized with dehumanizing conditions and dying.”

The tweet got a lot of people talking about how we talk about the detention centers. People on the right said Ocasio-Cortez was trivializing the Holocaust by calling the facilities “concentration camps.” Some nonpartisan Jewish groups warned about the use of Holocaust analogies in political discourse.

Her defenders, including a large number of scholars and left-wing activists, said that “concentration camps” had a wider applicability than the death camps at Auschwitz or Treblinka, and that the crowded, inhumane conditions merited use of the term.

And still others argued that the debate over nomenclature was a distraction from the real issue, which is how migrants are being treated in detention facilities. A government report found that across five detention centers, children were going without showers and hot food, and had few clean clothes. On Monday, the Trump administration contested a New York Times report that migrant children were being held in a Clint, Texas facility where disease, hunger and overcrowding were rampant.

What they said about AOC: “Six million Jews were killed in the Holocaust. It is disgraceful for Rep. Alexandria Ocasio-Cortez to compare our nation’s immigration policies to the horrors carried out by the Nazis.”

What they said about the detention centers: “We are horrified and angry about the conditions and we appreciate that Speaker Pelosi finally relented and supported the Senate bill to fund humanitarian relief,” RJC said in a statement this week to the Jewish Telegraphic Agency. Last week, the Senate approved $4.6 billion in emergency humanitarian aid for the border over Democrats’ objections that it included too much funding for enforcement and not enough for improving conditions at the detention facilities.

What they said about AOC: “Almost exactly one year ago, we urged caution when drawing comparisons to the Holocaust and reiterated our opposition to the horrible conditions separating families at the border,” tweeted Jonathan Greenblatt, national director of the organization combating anti-Semitism. “This resonates just as strongly today.”

Almost exactly one year ago, we urged caution when drawing comparisons to the Holocaust and reiterated our opposition to the horrible conditions separating families at the border. This resonates just as strongly today. https://t.co/ru1RWjuKgr https://t.co/2uhlvRuOaW

What they said about the detention centers: On July 3, Greenblatt linked to an article about the government report and tweeted: “The pictures and details in this report are startling. It’s inhumane, period. @DHSgov must end this cruelty immediately.”

According to @DHSgov watchdog, @CBP center conditions are so poor, a facility manager called the situation “a ticking time bomb.”
The pictures and details in this report are startling.
It’s inhumane, period. @DHSgov must end this cruelty immediately. https://t.co/d3dzLTwK06

What they said about AOC: “It’s an insult to the victims of the Shoah to make blatant false comparisons,” Rabbi Abraham Cooper, associate dean of the Holocaust research organization, told Jewish Insider. “Stop casting Trump as a latter-day Nazi scheming to build concentration camps. AOC and all Congressmen from both parties have a moral obligation to fix the humanitarian disaster at the border.”

What they said about the detention centers: In a statement to JTA, Cooper acknowledged a “humanitarian crisis” and pivoted back to Ocasio-Cortez: “Americans are compassionate people and understand that there is a humanitarian crisis at the border, but no matter how many times Congresswoman Ocasio-Cortez evokes Holocaust imagery, it is appalling and unacceptable… The need for laws that address border security while reflecting Americans’ history of compassion and our democracy’s historic values could not be more dire.”

What they said about AOC: “Making references to concentration camps in that context minimizes the atrocities of the Holocaust and cheapens the memories of the countless Jews who perished in those horrific camps,” Farley Weiss, president of the right-wing Orthodox synagogue organization, wrote in a letter. “There is simply no comparison with what happened in these concentration camps with what is occurring at the border.”

What they said about the detention centers: “There’s too many conflicting reports on it,” Weiss told JTA. “We want everyone to have basic access to cleanliness and being able to brush teeth and things of that nature.”

The Coalition for Jewish Values

What they said about AOC: “Concentration camps were places where Nazis inflicted slave labor, torture and death upon innocent Jews removed from their homes at gunpoint and transported there in cattle cars,” said Rabbi Avrohom Gordimer of the right-wing Orthodox rabbis’ group. “To use Holocaust terminology regarding the refugee situation at the border is deeply offensive.”

What they said about the detention centers: “We have no first-hand knowledge and there are multiple conflicting reports, so we can’t comment,” Rabbi Yaakov Menken, the group’s spokesman, told JTA.

What she said about AOC and the detention centers: In one tweet on June 24, Lipstadt condemned both Ocasio-Cortez’s language and the conditions at the centers.

“Talk about the horrific conditions & not historical analogies,” she wrote. “Don’t give those who are behind this policy a chance to piously claim they are being wrongly accused. Use of Holocaust analogies to condemn US immigration policy is a distraction.”

Talk about the horrific conditions & not historical analogies. Don’t give those who are behind this policy a chance to piously claim they are being wrongly accused. Use of Holocaust analogies to condemn US immigration policy is a distraction https://t.co/WozOl73OSZ https://t.co/CYzWPdjrfx

What he said about AOC: “It is baffling why someone would choose a term to condemn cruelty that is guaranteed to make the argument about the term and not about the policy,” he told Jewish Insider. “Analogies that evoke the Holocaust are, with the rarest of exceptions, presumptively offensive and unwise.”

What he said about the detention centers: “It’s appalling and it’s unthinkable for the United States to treat people — whether they’re admitted or not to the country — in such a manner, and all of us should be better than that,” he told JTA. “If you can’t unite as a country to prevent the suffering of children then we’re in just abominable and disgraceful shape.”