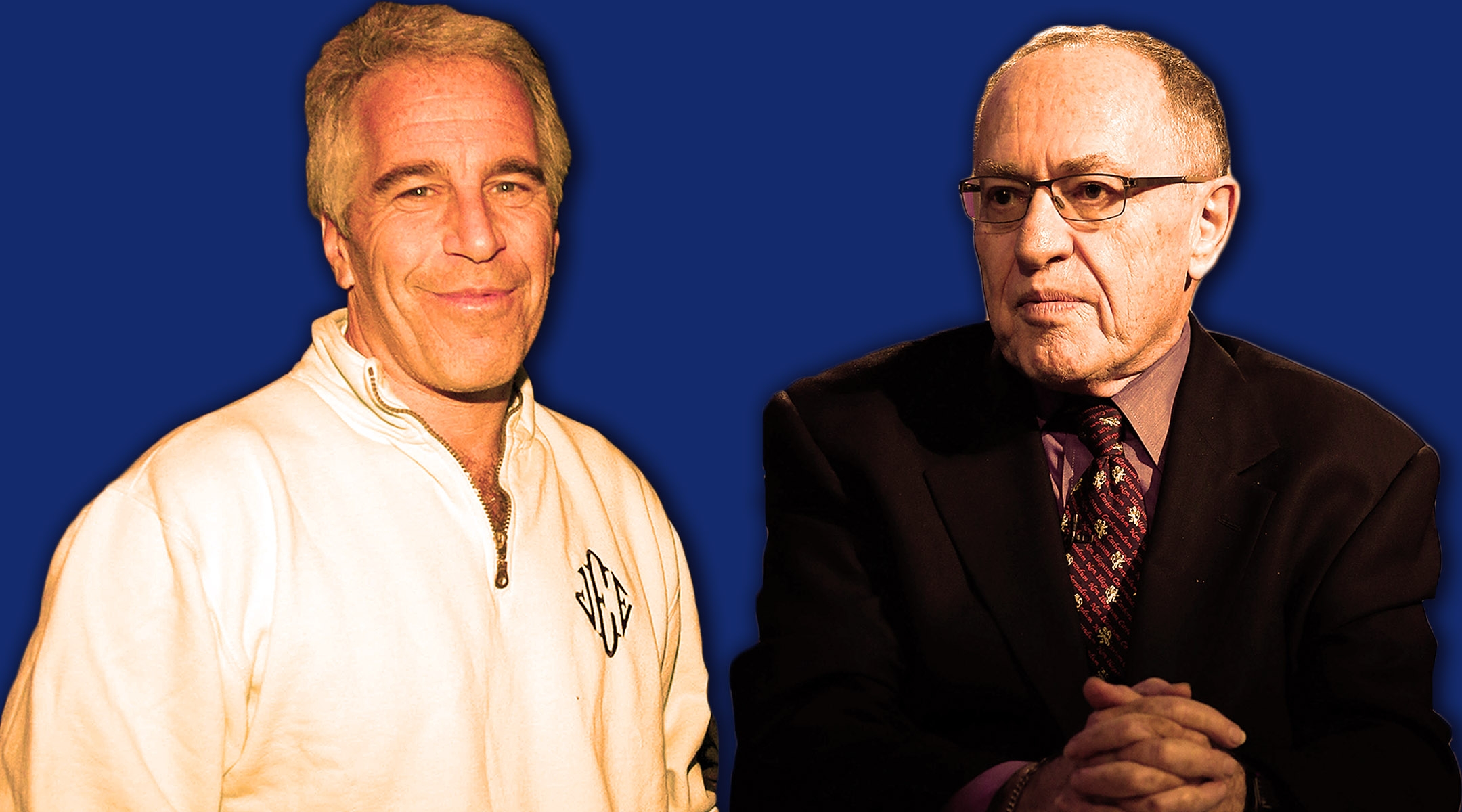 Alan Dershowitz, right, represented sex offender Jeffrey Epstein in a controversial 2008 plea deal and used to send him copies of his books to review before publication. (JTA illustration by Laura E. Adkins)
Advertisement

(JTA) — Alan Dershowitz represented convicted sex offender Jeffrey Epstein when he was sentenced more than a decade ago to what was generally considered an extremely light term.

Epstein had abused dozens of underage girls, but was given only 13 months in a private wing of a county jail. He was allowed to leave for work six days a week as long as he returned to the facility at night. He and his associates were given immunity from federal prosecution.

That agreement has come under scrutiny following Epstein’s arrest this week and indictment for sex trafficking.

In February, a judge ruled the 2008 deal illegal because the Jewish billionaire’s victims were not notified before it was approved. The case was reopened after a Miami Herald reporter identified some 80 alleged victims who said they were recruited into a sex ring run by Epstein and made to recruit others.

But Dershowitz said he would do it all over again. In fact, he told the Jewish Telegraphic Agency that he would try to get Epstein even less prison time if he had the chance.

“I have no misgivings and I will continue to represent controversial people,” the emeritus professor at Harvard Law School said. “That’s what I do. If I’m in a case, my job is to get the best possible result.”

Was that settlement fair to Epstein’s victims?

Dershowitz says that’s not his responsibility.

“That’s the job of prosecutors and the job of the judge,” he said. “My job is to get the best possible result for my client.”

Dershowitz, who has made a career of unabashedly defending unpopular stances, was happy to point out that he has represented a range of unseemly clients: far-right Jewish Defense League activists (accused of murder), O.J. Simpson (accused of murder), British socialite Claus von Bulow (accused of attempted murder) and, most recently, Harvey Weinstein.

Dershowitz sees it as an obligation, in a society governed by the rule of law, to defend even the most distasteful criminals. It’s not just for the money, he says, pointing out his pro bono work pro for the Aleph Institute, a Jewish group that helps prisoners.

“It’s as moral as a doctor administering to somebody in the emergency ward,” he said. “It’s in the highest tradition of Jewish law and American constitutional law. If you don’t want to live in a system like that, move to Iran.
“The most moral thing you can do is represent the most unpopular defendant.”

Dershowitz’s relationship with Epstein, however, extended beyond legal representation. He used to send Epstein drafts of his books before publication, and would participate in seminars convened by Epstein with other Harvard personalities, like the one-time president Larry Summers. He also attended social gatherings at Epstein’s Upper East Side townhouse.

Dershowitz says that aside from his role as a member of Epstein’s legal team, he has not been in contact with Epstein since the plea deal was finalized.

“My relationship with him was academic and he was a very smart guy,” he said in reference to the book drafts. “He read them and he critiqued them, and he made marginal notes and he was very good at it.”

According to one Epstein accuser, the friendship went deeper.

Dershowitz vehemently denies the allegations and says he was shocked to learn of Epstein’s crimes. He says he has emails proving that Giuffre is lying and that he has never met her or Ransome. Giuffre is suing Dershowitz for defamation.

“I never met any of these people,” he said. “Of course I’m categorically denying it. It’s just a falsehood.”

Dershowitz is one of a string of prominent Jewish men who have become entangled with Epstein over the years, when Epstein was better known as an investor than a sex offender. Epstein once financed a magazine, for example, with New York media mogul Mort Zuckerman.

The most involved by far is Leslie Wexner, the founder of Victoria’s Secret and The Limited, as well as a major philanthropist to Jewish causes. Wexner was the sole known client of Epstein’s secretive money management business, and Epstein was often described as his protege.

Although Wexner has said that the two have not been in touch for over a decade, they once were quite close. Epstein was a trustee of Wexner’s foundation, replacing Wexner’s sick mother on the board, and Wexner told Vanity Fair in 2003 that Epstein is “very smart with a combination of excellent judgment and unusually high standards. Also, he is always a most loyal friend.”

The most intimate and perhaps inexplicable connection between the two men, however, is a piece of shared property. Wexner bought the New York City townhouse in 1989 for $13 million, but Epstein was using it as a residence by the mid-1990s. The townhouse would formally change hands, from Wexner to Epstein, in 2011. According to The New York Times, the transfer document did not list a purchase price, which indicates that Epstein got the house from Wexner for free. After Epstein was released from prison, according to The New York Times, he graced the house with a photorealistic mural of himself in a jail.

When federal agents busted into that house this week, they found a trove of hundreds of sexually suggestive photos of underage girls — along with CDs bearing labels like “misc nudes 1.”

The house is the same one where Dershowitz is accused of having sex with Giuffre and Ransome. But there’s another link between Dershowitz and the house, which by the way has a heated sidewalk out front to melt snow. Its designer, the architect Horace Trumbauer, also designed Clarendon Court in Rhode Island — the home of Claus von Bulow.