Trump makes his week of ‘send them back’ about the Jews. Few Jews are happy. 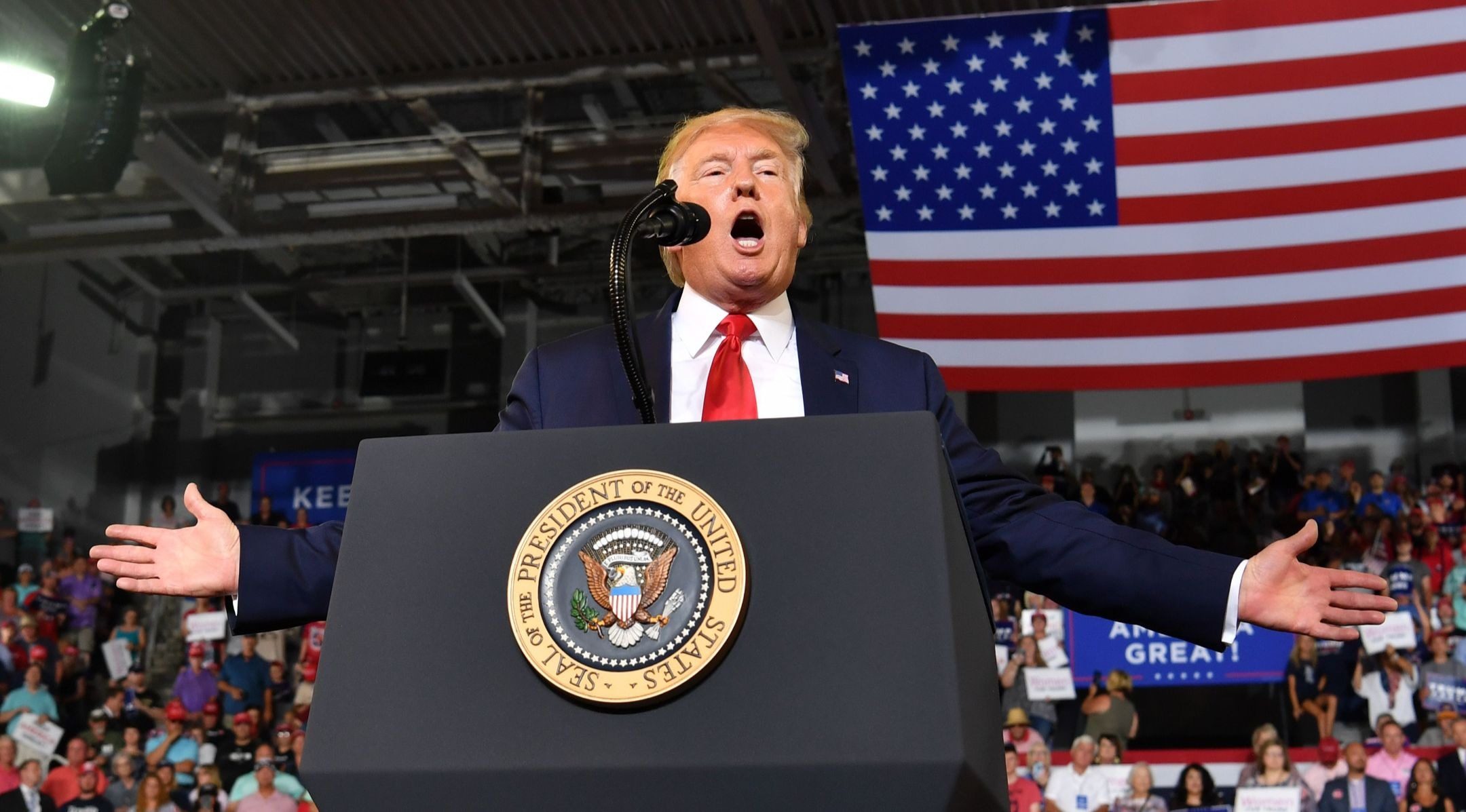 WASHINGTON (JTA) — It’s been dislocating, even dizzying, witnessing the devolution of President Donald Trump’s argument with four of his fiercest congressional critics, none of whom are Jewish, into an argument about… what Jews want.

Over and over since Monday’s tweet saying that that the Democratic congresswomen should “go back and help fix the totally broken and crime-infested places from which they came,” Trump has defended himself by calling the lawmakers and their party anti-Israel and anti-Semitic. In turn, Jews — including many who share Trump’s contempt for some of the women — appear to be asking the president to leave them out of it.

Immediately after his tweets, Democrats and a handful of Republicans called them racist. The House passed a resolution Tuesday calling them racist, with every Democrat and four Republicans voting yea. Major media stopped used wiggle words like “racially charged” and bluntly called his tweets racist.

(On Wednesday he identified the freshman lawmakers: Ayanna Pressley of Massachusetts, Alexandria Ocasio-Cortez of New York, Ilhan Omar of Minnesota and Rashida Tlaib of Michigan. All but Omar were born here; all are women of color.)

“When will the Radical Left Congresswomen apologize to our Country, the people of Israel and even to the Office of the President, for the foul language they have used, and the terrible things they have said,” wrote Trump. “I can tell you that they have made Israel feel abandoned by the U.S.”

The four, who call themselves “The Squad,” have diverse opinions about Israel: Tlaib, a Palestinian-American, wants a binational state. Omar is a harsh critic but supports two states. Tlaib and Omar back boycotts, Pressley opposes them and Ocasio-Cortez has not made her views clear on the issue.

Both Omar and Tlaib have been faulted for trading in classic anti-Semitic tropes about Jewish control of the political system. Ocasio-Cortez has said that as with any other minority, Jewish sensibilities should be of primary consideration in considering whether a statement is anti-Semitic. The New York congresswoman offended some Jews when she called migrant detention camps “concentration camps.” Other Jews defended her. She emphasized that she was not likening them to Nazi concentration camps.

In the telling of the president and his allies, that stew of views renders not just the four but the entire Democratic Party anti-Semitic.  The Orlando Weekly called it a “strange pivot.” The newspaper was describing remarks by Florida’s Republican senator, Rick Scott, who also defended Trump’s tweets by calling the Democrats anti-Semitic.

“It was not racist,” Scott said of Trump’s tweets. “It was clearly not the way I would do it, but let’s remember the position that these Democrats have taken. They’ve become the anti-Semitic party now and so that’s wrong. Our country is not anti-Semitic. They are attacking law enforcement, our border agents and ICE. That’s wrong. These people are doing their job.”

That prompted a rejoinder from Rep. Ted Deutch, D-Fla., one of the state’s most senior House members. He chairs the Ethics Committee and the Middle East subcommittee.

In a statement, the Jewish lawmaker listed his week’s activities, which included formally condemning the 1994 bombing of the AMIA Jewish community center in Buenos Aires; reviewing a recent trip to Israel; advancing legislation that would codify defense assistance to Israel and, separately, condemning the boycott Israel movement.

“Senator Scott should apologize to all Democrats and Republicans who work together every day on these vital issues, and he should apologize to the Jewish community of Florida, many of whom are lifelong Democrats who have been fighting anti-Semitism and standing up for Israel since its founding in 1948,” Deutch said. “And he should sit with me so I can explain to him what’s possible when politicians stop using dangerous rhetoric and start working together.”

The numbers would appear to back Deutch: American Jews still continue to favor Democrats overwhelmingly. And Jewish groups on all sides said Trump’s “go back home” rhetoric was out of bounds.

The Anti-Defamation League called Trump’s remarks racist and called on him to stop using Israel and Jews as a “shield.”

“As Jews, we are all too familiar with this kind of divisive prejudice,” said Jonathan Greenblatt, ADL’s  CEO and national director, in a statement. “While ADL has publicly disagreed with these congresswomen on some issues, the president is echoing the racist talking points of white nationalists and cynically using the Jewish people and the state of Israel as a shield to double down on his remarks.”

The American Jewish Committee also told Trump to leave the Jews out of it. “We can’t believe we have to say this, but no, the Democratic Party is not antisemitic and some of the Jewish people’s greatest champions have been and are Democrats. Politicizing antisemitism is exactly the wrong way to fight it,” the group tweeted.

The Republican Jewish Coalition’s executive director, Matt Brooks, decried those at Wednesday night’s Trump rally in North Carolina who chanted “send her back” when Trump again called Omar an anti-Semite. (Trump said he was “not happy” with the chant and tried to speak over it, but the media counted the seconds he allowed the cry to mount: 13.)

“The ‘send her back’ chants were wrong, vile, and don’t reflect who we are as Americans. I strongly oppose @IlhanMN views and policies but those chants have no place in our society,” tweeted Brooks.

Trump, to be sure, is mining and stoking a real division among Democrats over how to treat anti-Semitism. In a Twitter thread, CNN’s Jake Tapper quoted anonymous House Democrats as saying they were rankled when House Speaker Nancy Pelosi jumped to defend The Squad with the House resolution condemning Trump.  The anonymous Democrats noted that a similar resolution inspired by Omar’s anti-Semitic expressions was ultimately watered down.

In short, it was a week of whiplash for Jews, in which “send them back” rhetoric clashed with a number of events and statements in support of a Jewish agenda. On Monday the Department of Justice held a high-level colloquium on anti-Semitism, which focused primarily on the boycott Israel movement on campuses. On Thursday, at a State Department ministerial colloquium on international religious persecution, Vice President Mike Pence mentioned the Jews in Venezuela, where “media associated with the Maduro regime often cast coverage of Israel in anti-Semitic tones and trivialize or even deny the Holocaust.”

And on Wednesday, Trump met at the White House with survivors of religious persecution, including a Yemeni Jew, Rabbi Faiz Algaradi, and Irene Weiss, a Holocaust survivor who volunteers at the U.S. Holocaust Memorial and Museum in Washington.

Trump’s invocation of anti-Semitism and his defense of Israel, even if only intended to embarrass Democrats and defend his remarks, is playing well on the Jewish right — but only up to a point. Noah Rothman, of the conservative Commentary magazine, lamented that as a result of Trump’s ugly remarks,  “the Republican Party Trump represents is losing, or has already lost, the moral high ground in its efforts to call out Rep. Omar’s unveiled expressions of anti-Semitism for what they are. Democrats certainly aren’t doing so. Absent any check on her instincts, Omar and the ‘squad’ can be expected to renew their commitment to a special brand of ethnic and sectarian antagonism.”

As for the ADL, they insist that bigotry in defense of Jewish interests is no virtue.

Said the ADL’s Greenblatt of Trump: “Politicizing the widespread, bipartisan support for Israel and throwing around accusations of anti-Semitism is damaging to the security of Israel and the Jewish community. He should lead by example, stop politicizing these issues and stop smearing members of Congress.”

A version of this post first appeared in The Tell, Ron Kampeas’ weekly newsletter on all of the Jewish news from Washington. Subscribe to it here.