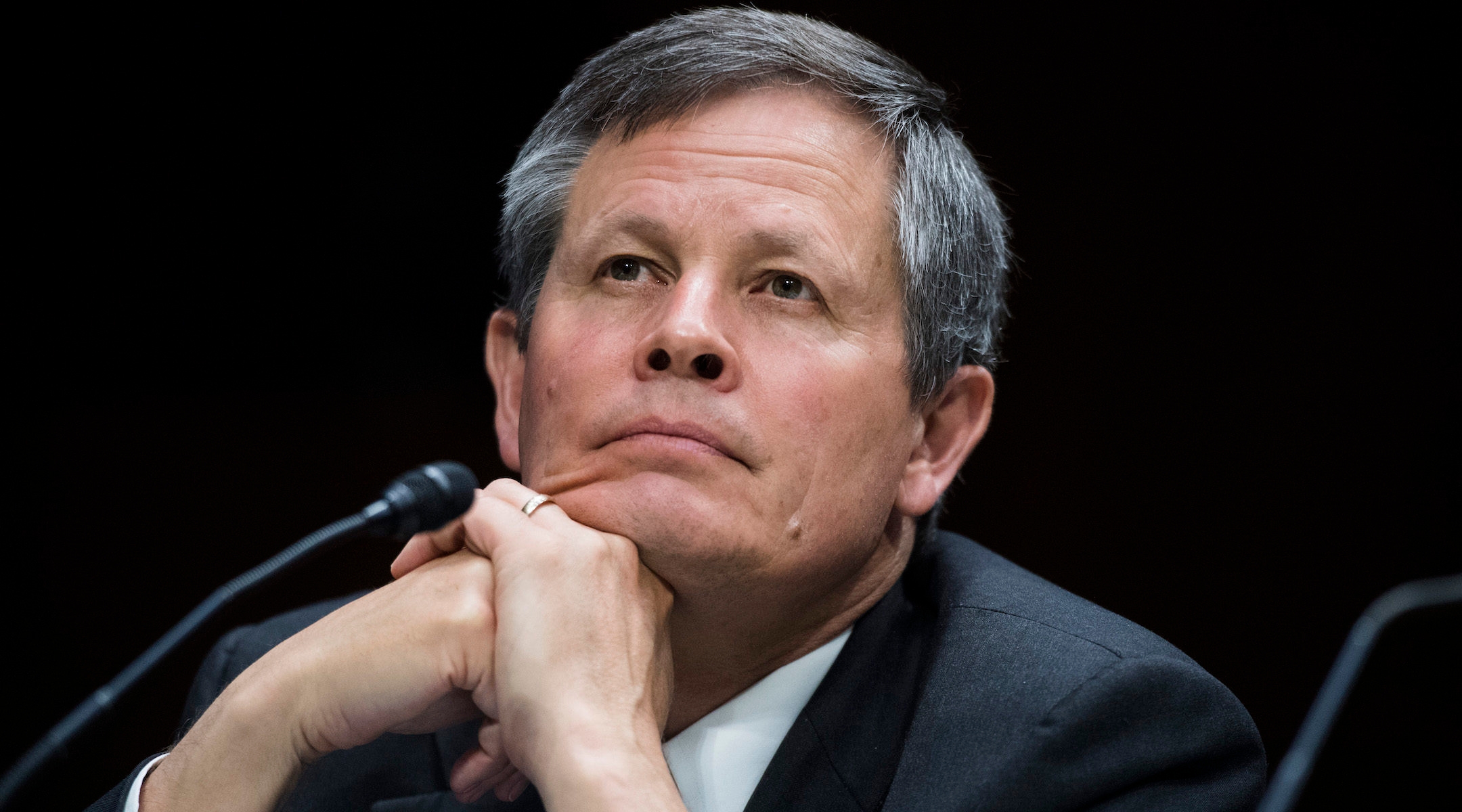 (JTA) — The Montana Association of Rabbis in an open letter condemned Sen. Steve Daines for his support of President Donald Trump’s “racist incitement and personal attacks” against “Democratic women of color in Congress.”

Daines, Montana’s Republican senator, last week tweeted his support of Trump after the president tweeted that the four freshman minority congresswomen should “go back and help fix the totally broken and crime-infested places from which they came.”

He was referring to Reps. Rashida Tlaib of Michigan, Ilhan Omar of Minnesota, Alexandria Ocasio-Cortez of New York and Ayanna Pressley of Massachusetts. Three of the women were born in the United States; Omar is a Somalian refugee and naturalized American citizen.

Trump justified his remark in part by calling the lawmakers anti-Semitic.

“Montanans are sick and tired of listening to anti-American, anti-Semite, radical Democrats trash our country and our ideals. This is America. We’re the greatest country in the world. I stand with @realdonaldtrump,” Daines tweeted in response to Trump.

The Montana Association of Rabbis, or MAOR, is comprised of the six non-Orthodox permanent rabbis working in four cities in the state. There are also four Orthodox rabbis in Montana who are not members of the association.

Montana Jewish communities are particularly sensitive to what the rabbis called the “rhetoric of hate”  because of recent attacks on them by white supremacists.

The open letter published on Wednesday read, in part: “Collectively, as Montana’s rabbis, we are the experts on anti-Semitism in Montana. We have studied it, lived it, and know it when we see it. Accusing these representatives of antisemitism is no justification for telling them ‘to go back to where they came from’ or inciting violence against them.

“In a direct affront to Montana’s Jewish communities and Jewish leaders, Senator Daines has decided to join in the president’s rhetoric of hate, a rhetoric which presents a serious threat to Jewish communities. We do not feel safer or supported by Senator Daines’ comments, rather we fear the legitimization the president and the senator are giving to racism, xenophobia, misogyny and hatred.”

The letter called on Daines to meet with rabbis “so that he can learn more about the dangers of anti-Semitism and how his words do not combat anti-Semitism as much as they promote white supremacy and hatred.”

Daines’ office said in a statement in response to the letter that “Steve welcomes the feedback of all Montanans. Steve is a strong supporter of Israel and the Jewish people. And as you saw in his recent tweet, he believes the anti-Semitic rhetoric from radical Democratic lawmakers is astounding.”

A Daines spokesperson said following Wednesday’s Trump rally in North Carolina that calls of “Send her back” directed at Omar, echoing Trump’s tweets, were inappropriate. “The senator does not agree with the chant and thinks it’s wrong,” the spokesperson told the Billings Gazette newspaper.

Rabbi Chaim Bruck, a rabbi in Montana who is not a member of the association, told NBC Montana in a statement that, “All of our key leaders in this state are a friend to the Jewish community. I think we do a disservice by even associating Steve Daines with anti-Semitism when there are real Jew haters out there. So calling someone who isn’t one anything like that, it does a disservice to the Jewish community.”