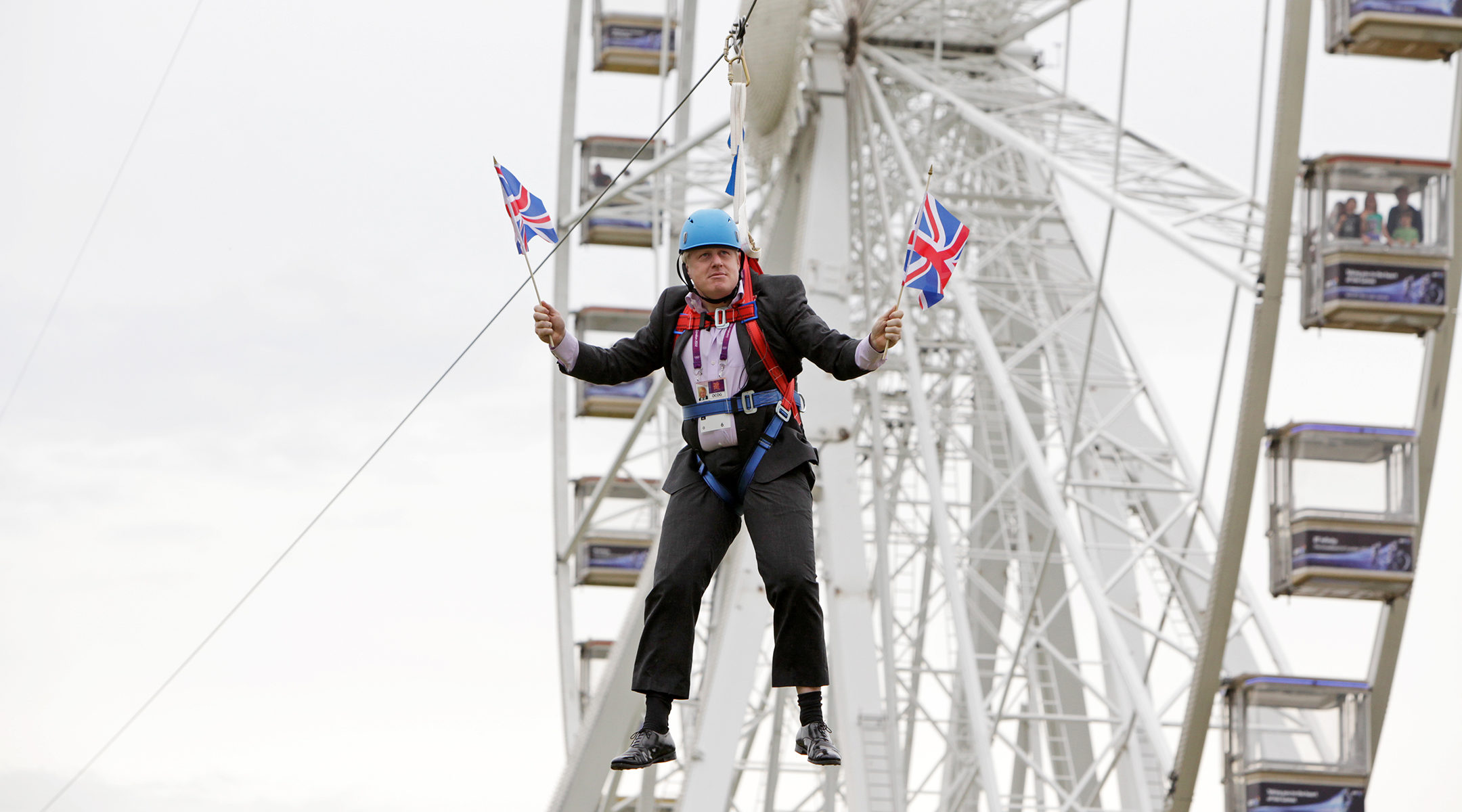 Boris Johnson, the mayor of London, waits to glide on a zip line onto the Olympic Park in London, Aug. 1, 2012. (Barcroft Media/Barcroft Media via Getty Images)
Advertisement

(JTA) — No matter their political affiliation, all sides can agree that Boris Johnson, who has secured his Conservative Party’s vote to become the United Kingdom’s next prime minister, is a colorful character.

As the mayor of London, a position he held for eight years until 2016, Johnson was lampooned by the media for his buffoonery. In one incident, he was wearing a helmet and waving British flags when he got stuck on a zip line that was supposed to be his dramatic entrance into the Olympic Park that year.

Also in ’16, his first year as foreign minister, Johnson was ridiculed for texting on his cellphone throughout Prime Minister Theresa May’s speech at the U.N. General Assembly in New York.

Those are just a couple examples of the clumsy but chummy style that has allowed Johnson, a 55-year-old journalist turned politician, to rise through the U.K.’s political ranks while many of his rivals underestimate him.

He won London’s mayoral race twice, even as a Conservative running in a liberal stronghold. On Tuesday, Johnson clinched 66 percent of the vote in the party’s election to determine a successor to May, who failed to deliver Britain’s departure from the European Union. Since Conservatives won the last national balloting in 2017, they will stay in power and Johnson will become prime minister.

While the British political establishment “operated within the structures of 20th-century political discourse, Johnson worked on his material like a standup preparing for a Netflix special,” Matthew d’Ancona, a previous editor in chief of The Spectator, wrote Monday.

For British Jews, Johnson is a mixed bag because of his record on Israel, his own Jewish roots and his apparent disregard for how many Britons expect senior politicians to speak about religious minorities.

1. Brexit on one side, Labour on the other.

Unlike May, Johnson is a hardliner and longtime supporter of Brexit. In other words, he has committed himself to getting the United Kingdom out of the European Union no matter what, with or without a deal with EU officials (May had desperately tried to strike a deal).

This is risky because a no-deal Brexit would likely slow down the economy, which in turn could increase the chances that Labour Party leader Jeremy Corbyn is elected after Johnson. Many British Jews believe that this would pose an existential threat to their community because of the explosion of anti-Semitism in Labour since Corbyn became its leader in 2015.

Johnson’s maternal great-grandfather, Elias Avery Lowe, was a Moscow-born Jew born to a textile merchant. Johnson confirmed this in a 2007 interview for the Jewish Chronicle.

“I feel Jewish when I feel the Jewish people are threatened or under attack, that’s when it sort of comes out,” Johnson said. “When I suddenly get a whiff of anti-Semitism, it’s then that you feel angry and protective.”

3. Still, Jews had complaints when he was mayor …

Throughout his tenure as London mayor, Johnson consistently ignored pleas from Jewish groups to ban the infamous pro-Palestinian Al Quds Day marches through London — events that have featured calls to kill Jews along with other anti-Semitic language and imagery. It was only last year that London police said they would intervene at the event to stop Hezbollah flags from flying. The move came with Sadiq Khan, a Labour politician and practicing Muslim, as mayor.

In 2014, Johnson called Israel’s attack on Hamas in Gaza “disproportionate,” and “ugly and tragic,” adding that “it will not do Israel any good in the long run.” He apparently tried to balance those remarks in the run-up to elections in the Conservative Party, which has seen a surge in support by Jews who have left Labour over its anti-Semitism problem, by calling himself a “passionate Zionist” who “loves the great country” of Israel. British politicians rarely call themselves “Zionists,” partly because of the actions of Zionist militants against British targets in prestate Israel.

“It’s totally unacceptable that innocent Israeli civilians should face the threat of rocket fire and bombardment from Gaza,” he said in a July 10 interview with the Jewish News.

4. … and when he was foreign secretary.

Despite a slew of pro-Israel statements and actions, Johnson is widely seen as responsible for getting the United Kingdom to help draft a U.N. Security Council resolution against Israel’s settlement policy. British Jewish leaders called the British role in the process a “disgrace,” and other supporters of the Jewish state described it as a betrayal.

Johnson has also been a supporter of the nuclear deal reached by Iran, the U.K., the U.S. and other world powers (the United States has since withdrawn from the agreement). Israel and its supporters are not big fans of the pact, which they say will allow the Islamic Republic to build a nuclear arsenal at close proximity to Israel.

However, Johnson was the U.K.’s first foreign secretary to pledge to vote against Item 7, a permanent U.N. Human Rights Council agenda item that singles out Israel for criticism, the pro-Israel group BICOM noted. He has criticized U.N. bias against Israel, calling it “disproportionate and damaging to the cause of peace.”

5. Call him the British Trump.

In the early days of Donald Trump’s presidency, Johnson spoke dismissively about the reality TV star turned politician, but the two have since built a positive relationship. On Tuesday, for example, Trump called Johnson a “good man” who is tough and smart.

Like Trump, Johnson has excited his right-wing base with derogatory statements about Muslims, which is making some British Jews uncomfortable.

The chairman of the Jewish Leadership Council, Jonathan Goldstein, wrote on Twitter in response.

“Boris Johnson’s comments totally disgraceful,” the tweet said. “Extraordinary to think he was Foreign secretary only a few weeks ago.”

On Tuesday, the organized Jewish community struck a more cordial tone, congratulating Johnson on the nomination and recalling its “long and positive relationship” with him “as both Mayor of London and Foreign Secretary.” The Board of Deputies of British Jews “look[s] forward to this continuing as he enters Downing Street,” said Marie van der Zyl, the board’s president.

The more left leaning Liberal Judaism movement made a shorter statement on Twitter that reflected the discomfort of many of the group’s constituents with Johnson.

The group “looks forward to working with @BorisJohnson, the new Prime Minister, as we have with Prime Ministers over the last decade,” the movement tweeted.