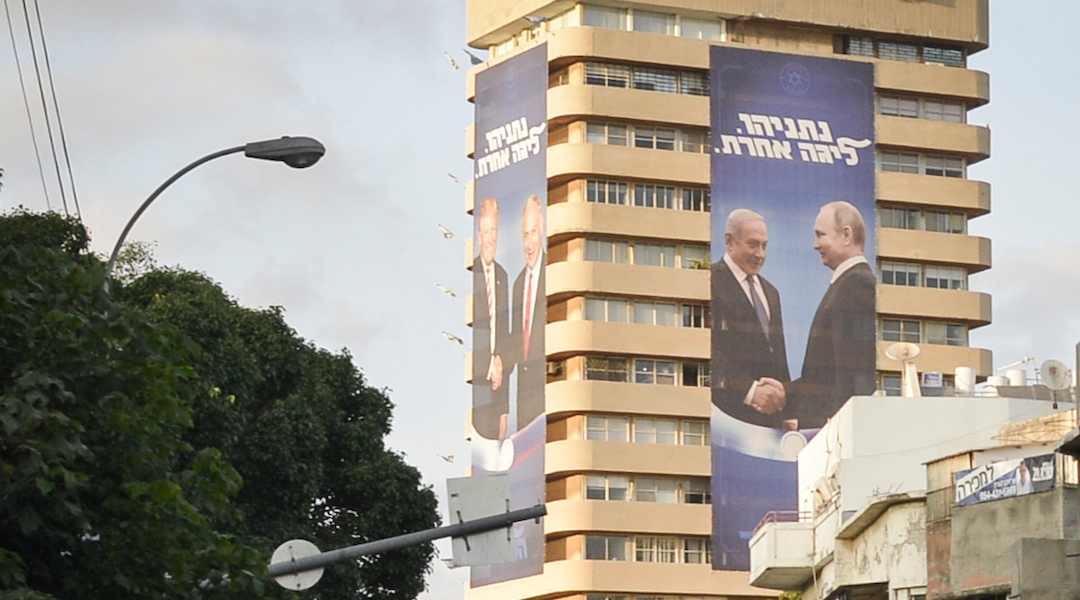 Large multi-story banners featuring Netanyahu with Putin, as well as others featuring President Donald Trump and Indian premier Narendra Modi, were unfurled on three sides of the party’s Tel Aviv headquarters on Sunday. The banners were part of a new campaign showcasing the Israeli leader’s relations with heads of statee.

An accompanying video sent to reporters featured clips of Netanyahu chatting with the three leaders. Netanyahu frequently boasts of his diplomatic skills and close relationships with his counterparts abroad.

Both the posters and videos featured the tagline “Netanyahu: A different league.”

This is not the first time that Netanyahu has used his close relationship with Trump to woo voters: He also featured the American president’s face on posters during the last election in April. But it is the first time that he has used Putin and Modi’s faces in campaign ads.

In Moscow, police have arrested well over 1,000 demonstrators protesting the barring of opposition candidates from the Russian capital’s city council election. Videos of confrontations between heavily armored riot police and T shirt-clad civilians have been making the rounds both online and in the news.

Unprecedented 1,388 detained in Moscow. This was planned. Police started arresting even before protest began. The authorities are scared at how often small protests have been springing up & want to intimidate. But polls show the number of Russians willing to protest is ticking up pic.twitter.com/uXj7DlTKqv

Netanyahu is gambling that Israelis’ desire for acceptance on the world stage and the positive reception Netanyahu’s high-level diplomatic outreach has received here will outweigh concerns about Putin’s anti-democratic policies.

“I think that what they are aiming at in Likud is to show that Bibi is capable of developing relations with anybody,” Ksenia Svetlova, a former Israeli lawmaker originally from Russia said, using Netanyahu’s nickname.

Close relations with the United States are a “given” but ties with countries like Russia and India are not taken for granted, she continued. “The goal is to put Bibi on some other level, [saying] nobody else has the skills and ability” to do this.

Netanyahu may also be attempting to reach out to Russian-speaking Israelis.

Responses to the rollout were mixed, with some social media users praising the new campaign and others critical of Netanyahu’s closeness to a leader widely seen in the west as a brutal autocrat.

“Petrovka, one of Moscow’s most upscale streets has been blocked now with protesters chanting ‘Putin is a thief,'” one Twitter user replied after Likud tweeted an image of the new posters Sunday.

“Assad [is in] another league,” another user tweeted, posting a picture of Putin shaking hands with the Syrian dictator.

Others, however, were more charitable. One user posted that “Netanyahu, whether you like him or not, has proven capable of making the two superpowers listen to what he has to say and has successfully pushed policies favorable to Israel –punching way above our weight.”