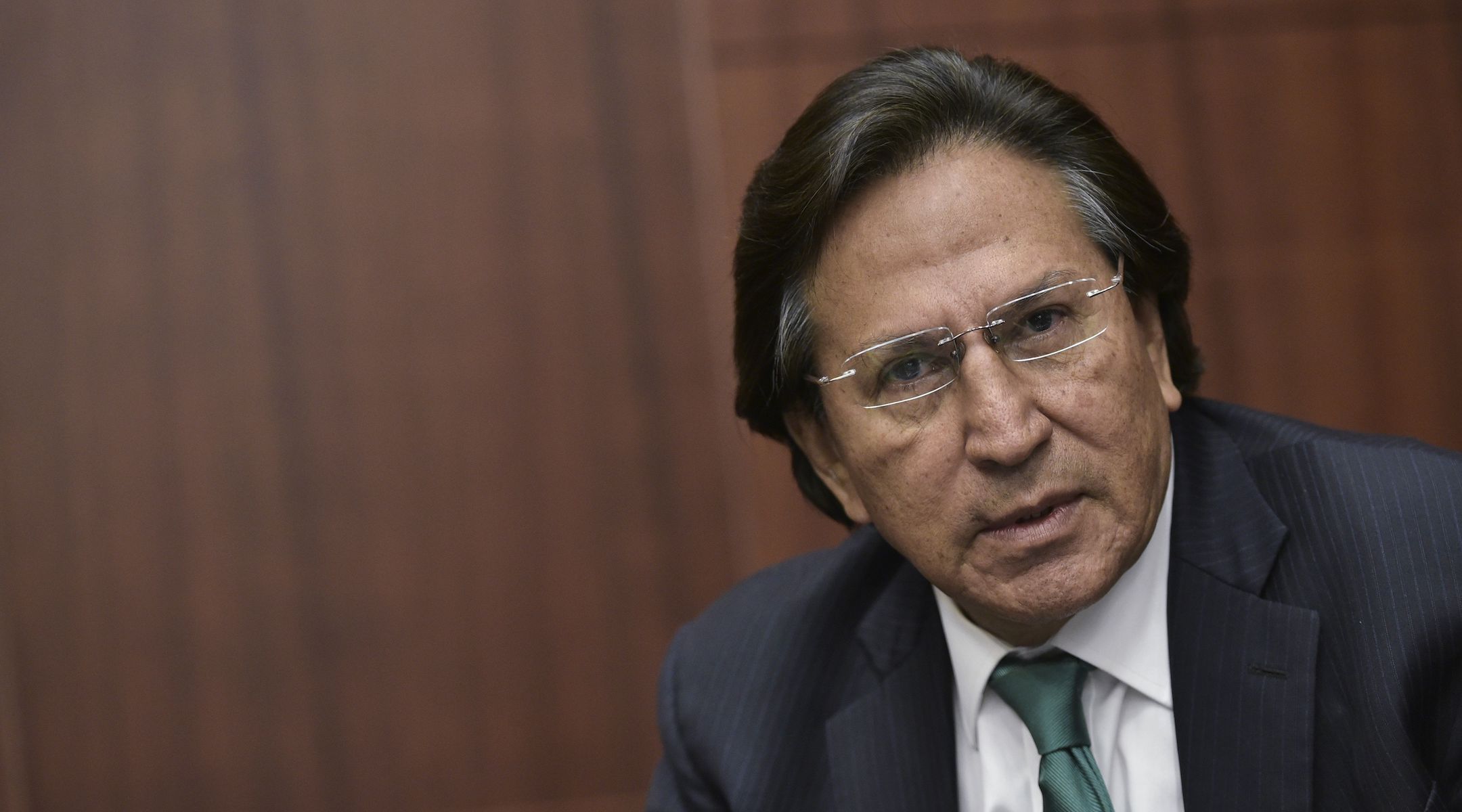 Former President of Peru Alejandro Toledo speaks during a discussion on Venezuela at The Center for Strategic and International Studies in Washington, D.C., June 17, 2016. (Mandel Ngan/AFP/Getty Images)
Advertisement

SAN FRANCISCO (J. The Jewish News of Northern California via JTA) — A former Peruvian president living in the Bay Area and facing bribery charges in his home country has been denied bail by a federal judge in San Francisco out of fear he would flee — to Israel.

Alejandro Toledo, who led Peru from 2001 to 2006, is wanted on corruption charges after prosecutors say he took $20 million from Odebrecht, a Latin American construction conglomerate.

U.S. marshals arrested Toledo, 73, at his Los Altos Hills home on July 16 in response to an extradition request. At a bail hearing on July 19, a U.S. attorney argued Toledo should be denied bail because of the significant risk that he would flee the country. Toledo’s wife, French-born anthropologist Eliane Karp, earned a degree at Hebrew University and has Israeli citizenship — and Israel does not have an active extradition agreement with Peru.

“Mr. Toledo has a history of extensive foreign travel and ties outside the United States,” Elise LaPunzina, assistant U.S. attorney, said in court according to an audio recording of the hearing. Those ties might “facilitate [Toledo’s] travel to a country that does not have an extradition treaty to Peru. Notably Israel.”

LaPunzina said the FBI found $40,000 in a suitcase at the time of Toledo’s arrest, indicating to Judge Thomas Hixson that the former politician “is potentially mobile.”

The Odebrecht bribery case, one of the largest political corruption scandals in history, has spanned continents, implicating leaders from Mexico to Mozambique, including a third of Brazil’s government ministers under former president Michel Temer. Jorge Glas, the former vice president of Ecuador, was sentenced to six years in jail, and former Peruvian president Alan Garcia committed suicide when prosecutors and police arrived at his home April 17 to arrest him.

Toledo has close ties to the Bay Area. He came to the University of San Francisco on a partial soccer scholarship in the 1960s, studying economics and going on to earn a Ph.D. from Stanford University. Over the past 25 years, he’s spent “at least half” of his time living in the Bay Area, his attorney said, and as recently as 2018 served as an “alumni scholar” at Stanford. The university said his position was unpaid and did not involve teaching.

Toledo is known as the first Peruvian president of indigenous descent and was credited with boosting his country’s GDP. He’s written a number of books, including “The Shared Society: A Vision for the Global Future of Latin America,” published in 2015.

Citing the extraordinary circumstances of the case, and his belief that Toledo does indeed pose a flight risk, Hixson denied bail pending the next hearing, which will be Aug. 7. Hixson is a magistrate judge of the U.S. District Court in California’s Northern District.

Peru’s current president Martin Vizcarra was preceded by Pedro Pablo Kuczynski, who had a German Jewish father who fled Nazi Europe. Kuczynski resigned last year after the release of videos showing some of his allies trying to buy the support of opposition lawmakers.