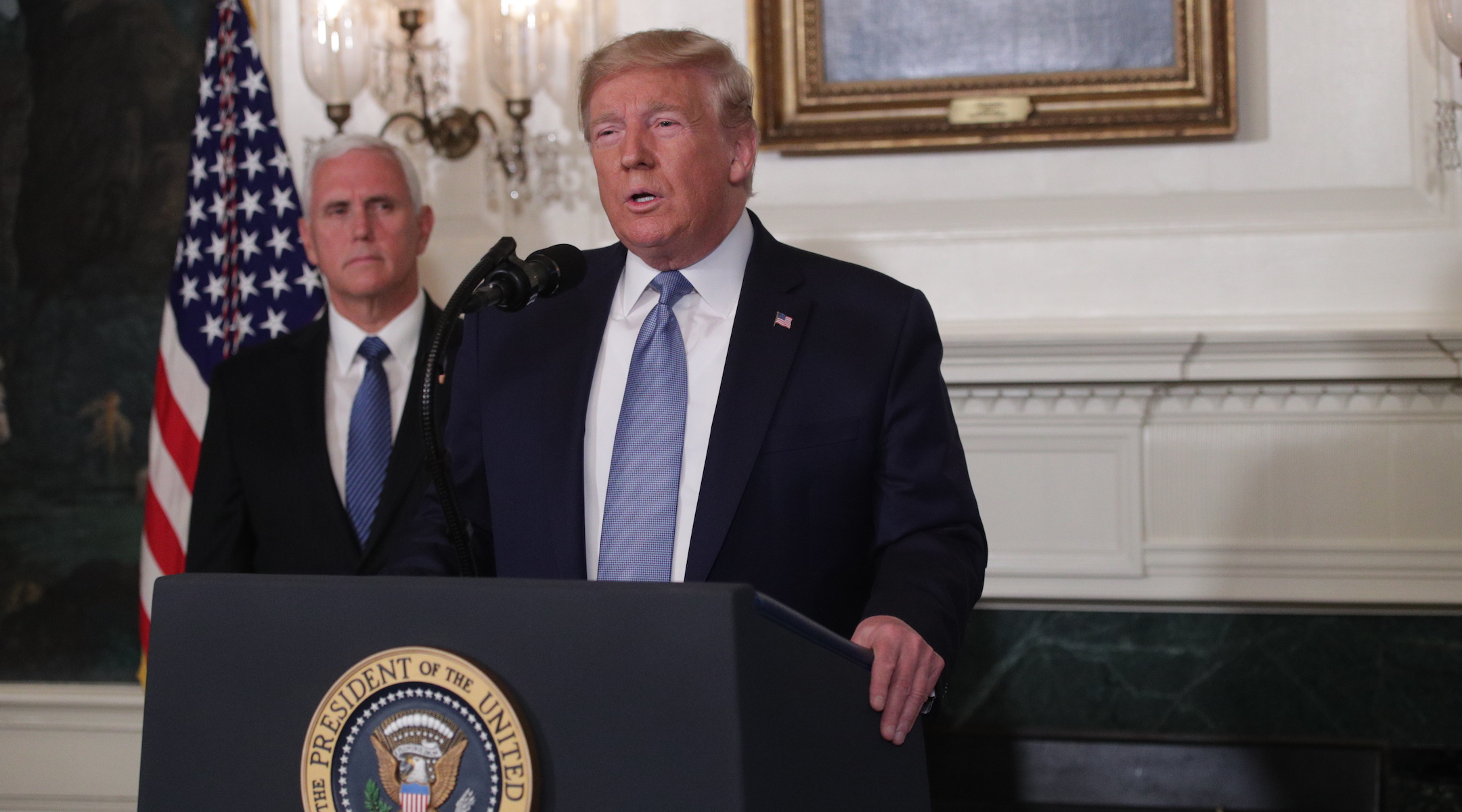 (JTA) — President Donald Trump said “hate has no place in America” in an address to the nation following the mass shootings over the weekend in El Paso, Texas, and Dayton, Ohio.

Trump pledged additional resources to the FBI to investigate domestic terrorism. He called for strengthening detection of early warning signs of shooters and for better background checks on gun owners. The president also condemned video games and social media for encouraging violent tendencies.

He said “those who commit hate crimes and mass murders should face the death penalty.”

Before the El Paso shooting on Saturday, in which 20 people were killed and 26 injured at a Walmart, the alleged shooter posted a white supremacist manifesto online.

In the Sunday shooting in Dayton, nine people were killed outside a bar.

“In one voice our nation must condemn racism, bigotry and white supremacy,” Trump said. “These sinister ideologies must be defeated. Hate has no place in America. Hatred warps the mind, ravages the heart and devours the soul.”

Trump said the FBI should receive “whatever they need” to investigate hate crimes and domestic terrorism. He said that law enforcement needs to pay more attention to extremist corners of the internet where hateful rhetoric can flourish.

The suspected El Paso shooter posted his manifesto on 8Chan, a forum popular with extremists. The manifesto was filled with anti-immigrant invective.

“We must recognize that the internet has provided a dangerous avenue to radicalize disturbed minds and perform demented acts,” Trump said. “We must shine light on the dark recesses of the internet and stop mass murders before they start.”

Trump also condemned video games that contribute to the “glorification of violence” in society.

He called for bipartisan legislation to “better identify mentally disturbed individuals who may commit acts of violence.” The president also said the United States needs “to do a better job in identifying and acting on early warning signs.”

Trump called for legislation to restrict access to guns — and take them away — from those judged to pose a risk to public safety. He added that he did not blame guns themselves for the attack.

“Mental illness and hatred pulls the trigger, not the gun,” he said. ‘”We must make sure that those judged to pose a grave risk to public safety do not have access to firearms, and that if they do, those firearms can be taken through rapid due process.”

Mainstream Jewish groups have called for new gun safety laws to curb mass shootings. Jewish critics of Trump have said his anti-immigrant rhetoric and racially charged rhetoric has led to a climate of incitement against immigrants and minorities, which the administration denies.