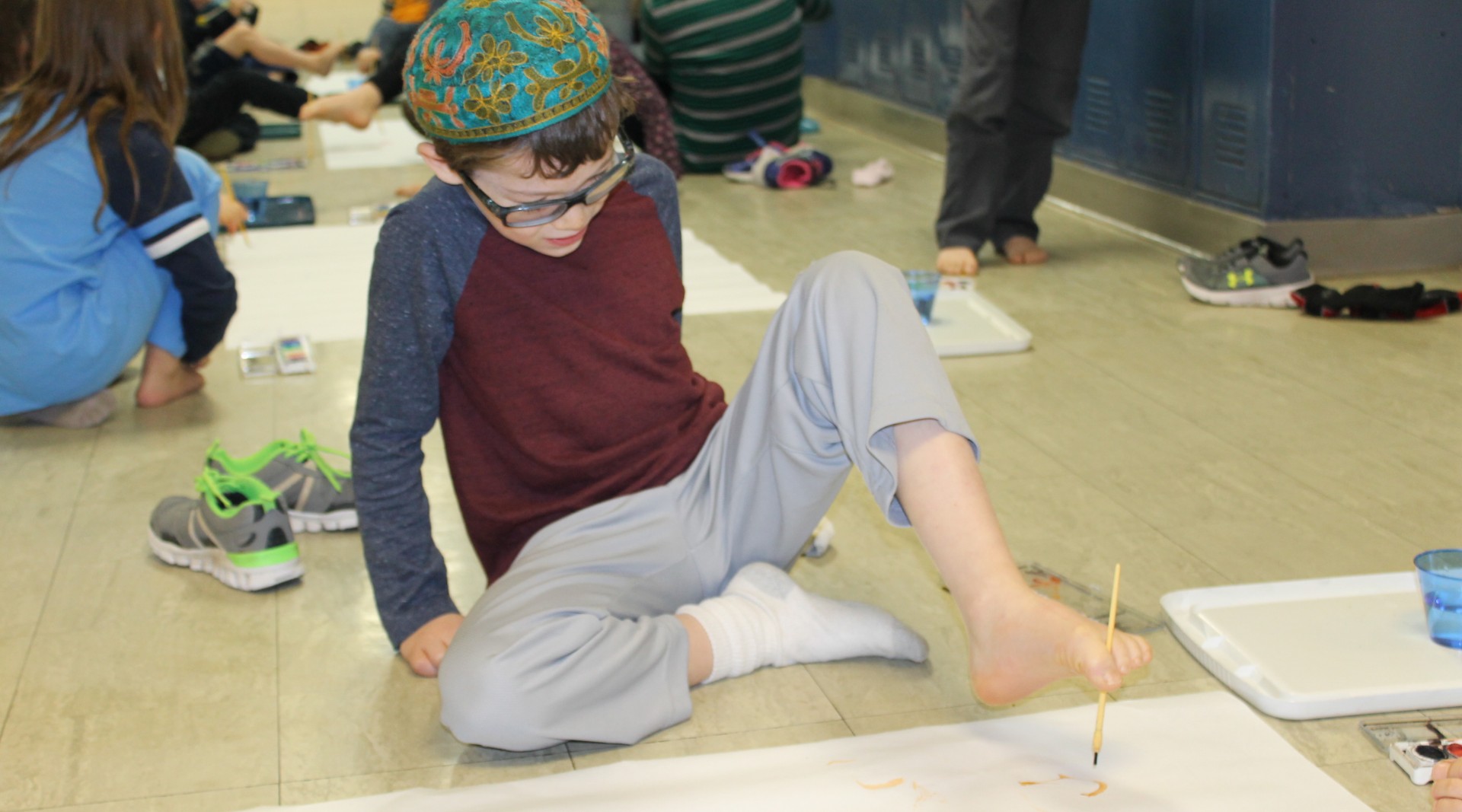 About five years ago, Jennifer Rosenberg faced a conundrum.

As head of a Jewish day school in Michigan, Rosenberg noticed a marked increase in families interested in enrolling children with disabilities like dyslexia, attention deficit disorder and autism.

Rosenberg wanted to welcome these families seeking a Jewish education for their children, but she knew that accommodating such students required extra resources — a real challenge for her small elementary school, Hebrew Day School of Ann Arbor.

“It would be a terrible shame and really a crime if we didn’t, as a Jewish community, as Jewish educational institutions, make sure that all children have an opportunity to participate,” she said.

So Hebrew Day School doubled down on its support for special needs. Now nearly half the school’s students receive some kind of supplemental support.

The school also made celebrating inclusion the centerpiece of its last academic year. When teaching about Moses, for example, teachers highlighted his choice to lead the Jewish people out of Egypt despite his speech impediment.

The goal, Rosenberg said, was to help students understand that “the ways that we are different is both a blessing and a challenge.”

The Michigan school is among many Jewish schools across the country investing in professional development, additional staff and revised curricula to better serve students with mental, cognitive or social disabilities. More often than not, the change is happening despite the pressures of cost, extra staff needs and the potential impact on the larger student body.

“It has become much more normative for Jewish educators and clergy and other Jewish professionals to be thinking about disability inclusion,” said Meredith Polsky, co-founder of Matan, a nonprofit that helps Jewish organizations create supportive environments for children with special needs. Polsky said Matan has worked with about 3,000 educators.

The trend is part of a larger shift in American education.

By 2015, some 95 percent of students with disabilities aged 6 to 21 were being served in regular schools, according to the National Center for Education Statistics.

Jewish schools have shifted, too. As one article in the Journal of Jewish Education noted, the conversation in the Jewish day school world has shifted from “why” such schools need to provide special education to “how” they should do so.

Schools are taking a variety of approaches. In some cases, the focus is on mainstreaming students with disabilities into the general student population. In others, high schools are trying to provide alternative paths for students for whom college enrollment is not a suitable next step. In a few cases, Jewish schools are trying to offer other accommodation to students who temporarily or permanently cannot be served in a Jewish day school. 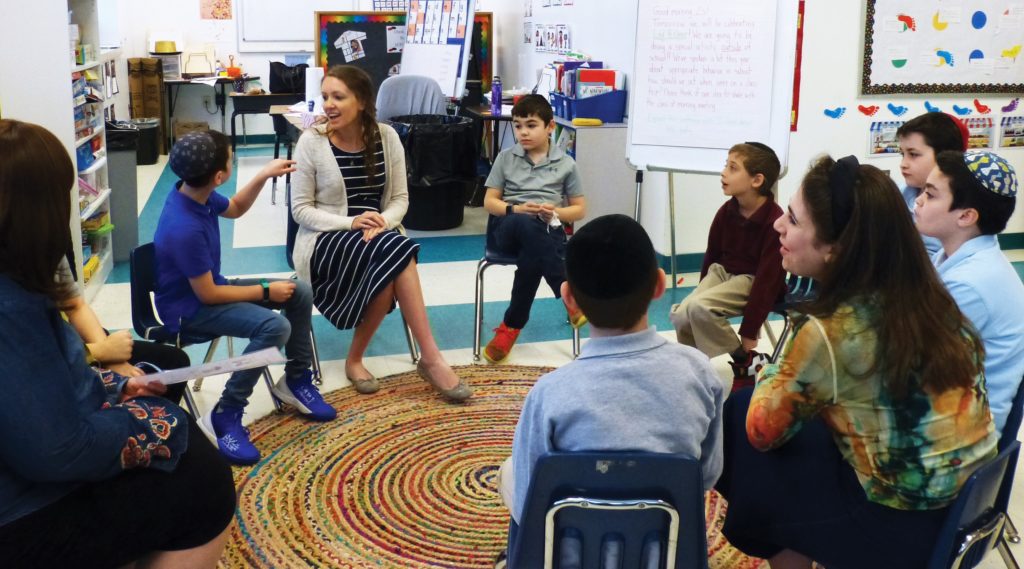 At SINAI Schools, a collection of seven Jewish schools for 165 students with special needs in New Jersey, the morning meeting is an exercise in inclusion. (Courtesy of SINAI schools)

On New York’s Long Island, the Hebrew Academy of Long Beach, a 1,700-student school known as HALB, has introduced an “integrated collaborative teaching” model for first and second grades that features regular and special education teachers in the same classroom, differentiating instruction for individual students. The school also uses a blended learning model featuring computers in the classroom that track students’ progress.

Last year Bruria Eisner enrolled her son Aron, who has ADHD and attended public school, in the program. While two of Aron’s siblings went to Jewish day school, she had found that the schools lacked the resources to teach Aron, who had a hard time sitting still during circle time at nursery school.

After a year in the afterschool program, Aron’s Jewish literacy has soared, Eisner said, and now that he is caught up and medicated he’ll be starting second grade at a Jewish day school this fall.

At the Katz Yeshiva High School of South Florida, in Boca Raton, most graduates move on to four-year colleges. But the school recently began helping students with special needs not suited for college who might do better going straight into the workforce or pursuing an associate’s degree. Nationwide, some 265 work-readiness college programs aim to help students with disabilities become employable, compared with just 25 in 2004, according to a coordinating center at the University of Massachusetts, Boston.

Katz hopes soon to offer courses that lead to certifications in such fields as health care, business management, technology, coding and engineering.

“I think it’s really important for students who have a hard time learning for there to be a real-world connection and usage and application for what it is that they are learning,” said Rabbi Avi Wasser, the school’s director of learning and academic support.

One of the main obstacles to serving children with special needs appropriately, experts say, is the reticence of some parents to acknowledge that their child has unique needs.

“I still think there is a stigma, and parents come to us later than they should, after years and years of struggling in whatever school,” said Rabbi Yisrael Rothwachs, the head of SINAI Schools, a collection of seven Jewish schools for 165 students with special needs in New Jersey. “Some parents still don’t want to have their child in a special ed program, and that’s challenging.”

The key to reducing that stigma, Rothwachs said, is promoting an inclusive environment.

“I think regular education Jewish day schools have been doing a better job at counseling their parents and stretching themselves to be as inclusive as possible and think out of the box to meet the needs of the children,” he said, “but at the same time being honest with themselves and with parents about what the limits are.”

The other major challenge is financial.

Adding special needs resources is expensive, and while some students are eligible for government services inside of Jewish day schools, much of the infrastructure that supports students’ special needs must come from private funding. At the Hebrew Day School of Ann Arbor, a $225,000 grant helped pay for the year of inclusivity and additional hours for a resource specialist and school psychologist.

“The concern was: If you are doing something for the weak kids, is that going to take away from the high-level education I expect for my brightest kid?” Altabe said.

Nathaniel Rogoff, HALB’s president, is among the parents enthusiastic about Altabe’s approach. His daughter, whom he describes as a “very good student,” was in the integrated classroom for first and second grades.

“I wanted to make sure that she was in the class so there wouldn’t be any stigma of ‘oh my God, my child is in the slower class.’” Rogoff said. Now, “from my daughter’s experience, I’m absolutely thrilled. She’s reading above grade level. She’s doing math above grade level. And I think the environment she has in school really fostered that.”