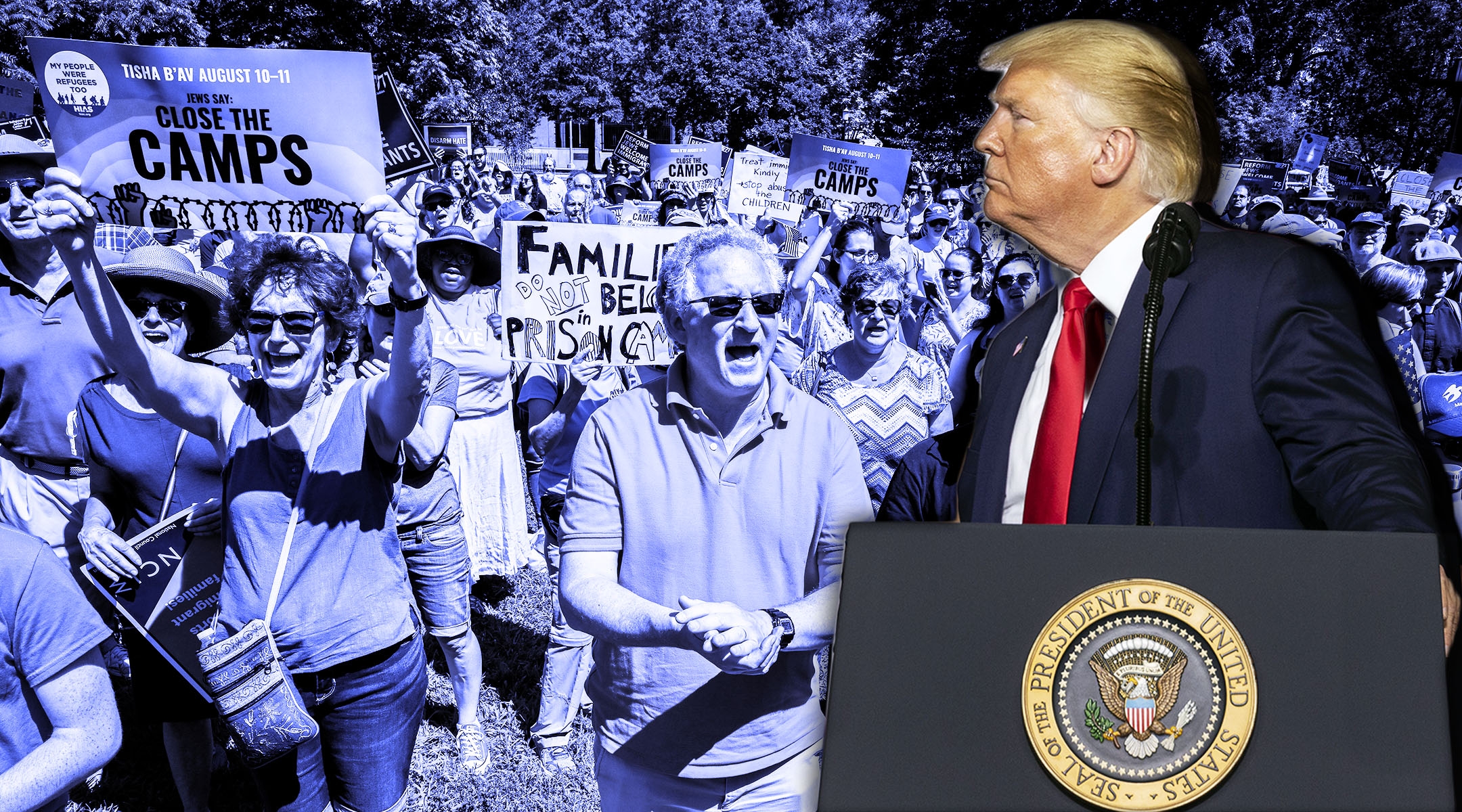 Jewish, interfaith and immigrant groups hold a rally in front of the White House to commemorate the Jewish day of mourning by calling on the Trump administration to end its inhumane immigration policies, in Washington, DC. President Trump accused Jewish Americans who vote for Democrats of being "disloyal."(Getty Images)
Advertisement

(JTA) — If you are a Jewish Democrat, I think President Trump just called you a bad Jew.

That’s not the prevailing interpretation of the remarks made by the president on Tuesday, when he told reporters, “I think any Jewish people that vote for a Democrat — it shows either a total lack of knowledge or great disloyalty.”

A lot of the Jewish leaders who exploded over the comment felt the president was touching on that classic anti-Semitic canard: that Jews aren’t sufficiently loyal to the countries in which they reside.

“It’s unclear who @POTUS is claiming Jews would be ‘disloyal’ to, but charges of disloyalty have long been used to attack Jews,” Anti-Defamation League CEO Jonathan Greenblatt tweeted.

“If this is about Israel, then Trump is repeating a dual loyalty claim, which is a form of anti-Semitism,” said Halie Soifer, executive director of the Jewish Democratic Council of America.

Trump’s lack of clarity certainly makes it possible that he was conjuring up dual loyalty. But here’s the thing with Trump: He doesn’t think dual loyalty is necessarily a bad thing. Back in April, he referred to Israel’s leader, Benjamin Netanyahu, as “your prime minister” in an address to a group of Jewish Republicans. Critics heard the dual loyalty charge, but it is clear in context that he thought it perfectly natural that a group of hawkish Jewish Americans would regard Israel’s prime minister as “theirs.” If anyone in the room objected, there is no record of it.

So if not dual loyalty, what else was Trump thinking? It’s possible that Trump considers Jewish Democrats as disloyal to him.

“Disloyal” is a curse in Trump’s famously limited rhetorical vocabulary. He has deployed it against fellow Republicans who don’t show him sufficient fealty, against corporations that oppose his policies — and, this is key, against opponents who appear disloyal to each other. (He once disparaged Hillary Clinton as disloyal because she undercut Bernie Sanders.) He regards disloyalty as a character flaw. Trump watchers, like the Washington Post’s Marc Fisher, suggest that Trump takes his cue from real-life and movie mobsters, learning that “the way to insulate himself from the betrayals and backstabbing of the business world was to place a premium on loyalty.”

Andrew McCabe, who briefly replaced James Comey as FBI director, once referred to Trump‘s “kind of overwhelming or overriding focus on loyalty and sorting everybody out immediately — like you’re either with us or you’re against us.” Trump has famously complained that evangelical Christians have shown him more gratitude than American Jews for moving the U.S. Embassy to Jerusalem from Tel Aviv.

“I’ll tell you what,” the president told Mike Huckabee last year, “I get more calls of ‘thank you’ from evangelicals, and I see it in the audiences and everything else, than I do from Jewish people. And the Jewish people appreciate it, but the evangelicals appreciate it more than the Jews, which is incredible.”

“Thank you to Wayne Allyn Root for the very nice words,” Trump tweeted before quoting Root: “President Trump is the greatest President for Jews and for Israel in the history of the world, not just America, he is the best President for Israel in the history of the world … and the Jewish people in Israel love him … like he’s the King of Israel. They love him like he is the second coming of God … But American Jews don’t know him or like him. They don’t even know what they’re doing or saying anymore. It makes no sense!”

Later Wednesday morning, however, Trump appeared to change course in attempting to clarify what he meant.

First, the Israel thing: In context, it does makes more sense if Trump were saying Tuesday that Democratic Jews were being disloyal not to America but to Israel.

Again, consider the context: Trump had been attacking Reps. Ilhan Omar and Rashida Tlaib, two Democrats who have been harshly critical of the Israeli government and who support the boycott Israel movement. Omar had talked the day before about cutting off aid to Israel for its treatment of the Palestinians.

“I can’t even believe that we’re having this conversation. Five years ago, the concept of even talking about this — even three years ago — of cutting off aid to Israel because of two people that hate Israel and hate Jewish people. I can’t believe we’re even having this conversation,” Trump fumed. “Where has the Democratic Party gone? Where have they gone where they’re defending these two people over the state of Israel? And I think any Jewish people that vote for a Democrat — I think it shows either a total lack of knowledge or great disloyalty, alright?

So that’s three possibilities as to what Trump meant by “great disloyalty”: disloyal as Americans, disloyal to Israel or disloyal to Trump — and maybe four if you add the possibility that even Trump wasn’t sure what he meant.

But Trump adds a fifth interpretation, which may be the most convincing: Jews are being disloyal to “Jewish people.” That’s what the Republican Jewish Coalition insisted in a tweet Tuesday.

“President Trump is right, it shows a great deal of disloyalty to oneself to defend a party that protects/emboldens people that hate you for your religion,” the RJC wrote.

“Disloyalty to oneself.” The RJC has every reason to make Trump look as good as possible, and Trump may be eager to cast himself as Defender of the Jews. It is not clear, however, that accusing Jews of self-hatred is any less offensive than accusing them of dual loyalty.

Perhaps Trump, and the RJC, thinks there is a right way to be Jewish, although at the moment it is not the way most American Jews identify as Jews. The Jewish majority tends to be liberal on social and economic issues and immigration. Nationalism, as opposed to patriotism, makes them nervous. They support Israel even when they are critical of its government and policies, and don’t believe Omar or Tlaib speak for them or the party. They want a pro-Israel president and Congress, but consider Israel as one among a number of factors in deciding which politicians and policies they support.

As a result, American Jews vote overwhelmingly for Democrats, as they did in 2016 and 2018. Big Jewish districts tend to deliver mainstream pro-Israel liberal Democrats like Florida’s Debbie Wasserman Schultz and New York’s Jerry Nadler. They tend to want to see their pluralistic, democratic values reflected in Israel. And polls have shown that they, like most Democratic voters, see support for Israel and criticism of the Israeli government’s policies as totally compatible.

Few Jews appreciate others, including fellow Jews, telling them how they should be Jewish. If they are loyal to anything, it is to the idea that all Jews get to decide for themselves what kind of Jew they want to be.