Howard Jacobson on his new novel, British anti-Semitism and calling himself the ‘Jewish Jane Austen’ 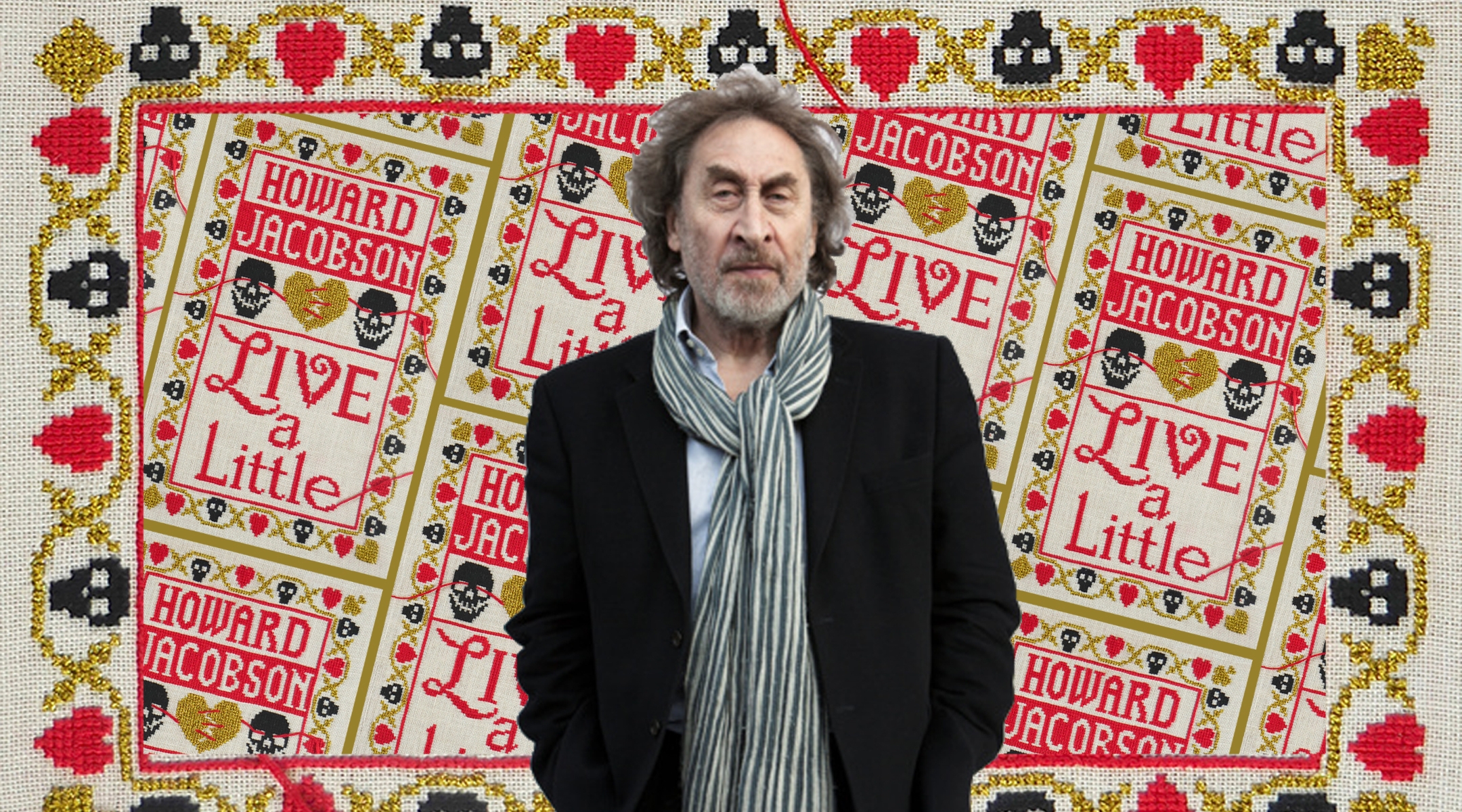 (JTA) — Howard Jacobson is a funny writer. He has penned several comedic novels, and many commentators said his 2010 Man Booker prize-winning work “The Finkler Question” was the first humorous book to win the prestigious award for decades.

But Jacobson, one of the most celebrated authors in the United Kingdom and an outspoken liberal Zionist, has trouble finding much humor in the current state of a world dominated by politics and social media.

Nevertheless, conversation is a central part of his latest novel, “Live a Little,” which was published this week. In this case, it’s conversation between Shimi and Beryl (at times called “the Princess”), two 90-year-olds who (sort of) fall in love. Shimi remembers everything, while Beryl is losing her memory.

Jacobson spoke about the novel, on the anxiety of being a British Jew in 2019, his self-definition as the “Jewish Jane Austen” and much more.

JTA: What brought you to this story of these elderly folks who develop a surprising friendship, maybe romance?

Jacobson: It’s quite mysterious, really. I always do find where a book comes from mysterious. You can trace some of these things, and some you can’t.

I suppose Shimi began as a more familiar figure for me. He’s a man who’s getting older, suffering the sorts of semi-comical ailments that beset men of that age. Shame, I like writing about, I’m very interested in shame. It’s a subject that’s been dear to my heart. I’ve always thought shame explains why I’m the kind of writer I am … And then I got dissatisfied with it precisely because it was familiar territory. And I laid [Shimi] to one side and started to write some other things, and then a week or two later, I don’t know how, the Princess just appeared. She truly did appear.

How does a character just appear?

I’ve just come back from talking in Italy at the Mantova literary festival. I thought they would understand what I meant if I said she rose up from the sea of my imagination like Botticelli’s Venus. Out of the waves, she appeared. Botticelli’s Venus appeared naked on the seashore, of course. Beryl did not: She appeared swathed in her scarves and things. She was just there and I can’t account for it. … Well, I suppose my history of talking to women, and thinking about women, and thinking about the women I’ve liked most. I have a taste for women with disdainfulness, as I have been often the object of it. I still like it. I like the way women scorn men.

Of all my characters, she is now my favorite character. And I’m never going to write about anything else but 90-year-old women. From now on, that’s it. And maybe I’ve always been a 90-year-old woman.

Do you think your novels, and maybe “Live a Little” in particular, are received differently in Britain and in the United States?

I try not to read my reviews because it’s not healthy. But my wife passes a few good sentences by me. And I’ve just come back from Italy, where they really get it. … Talking to an Italian audience is like talking to a Jewish audience. I felt that I was back talking to my Jewish audiences in North London or in Manchester; they smile at you and encourage you in the same way.

I’ll be very interested to see what Americans will make of it because [Beryl] does break some rules, which might be a bit more sacred in your country than they are in mine at the moment.

I don’t think anything is sacred in our country anymore. But maybe that’s just me.

Well, I say sacred in the sense of rigidly applied — sacred, no. Nothing’s sacred anymore … I’ve not been to America since Trump took over, but I bet you can feel it. I bet you can feel conversation is different. Here, people just yell at one another all the time. It’s come all the way down to the street. People honk their motorcars more, cyclists drive at you, there’s a real belligerence in the air. It’s a very strange thing — quite frightening, actually, what’s happening here. What’s hard to know is whether has Brexit caused it or, much more likely, is Brexit simply a symptom of something?

There are reasons to worry that if this goes on, the country becomes even more restive, and as a consequence of Brexit — if and when it happens — there’s economic hardship. That’s never a good time for Jews, when there’s economic hardship, because you will always find the old tropes of Jews and money are still alive and well. They don’t go away. The other day, people invoked “Soros the banker.” And when people mention the word Soros, they don’t even have to say Jewish, it’s understated. I’m worried about that.

But most of all, and you know about all this, we’re worried about the Labour Party, which was once a home for Jews.

So where do British Jews go?

Is the anti-Semitism people talk about in the U.K. as bad as it seems from the outside looking in?

Well, I mean, it’s not as though I go out onto the streets and fear for my life. I shouldn’t say that because I’m gonna get knifed today, but I don’t. I go around, I appear in public, I say things and I don’t get attacked for them. I’m not on Twitter, otherwise I might discover that people are abusing me roundly all the time. And there are places, of course, where people are attacked. There are places where if you were an Orthodox-looking Jew, and you’ve got a kippah and you’ve got your tsitsis, then you could be attacked, and some are attacked.

It’s an intellectual tone that’s discomforting. You never know how these things move from the opinion makers, the intellectuals, the politicians, the universities down into the mob. I think we can call them a mob again; they’re behaving like a mob. The universities are hotbeds of that form of anti-Semitism which claims it isn’t anti-Semitism, and says it’s anti-Zionism, which is nonetheless anti-Semitism. Those who say “I’m an anti-Zionist, I’m not an anti-Semite,” I will not admit that distinction. If they say “I don’t like Israel’s foreign policy, I don’t care for Netanyahu,” fine. That’s not anti-Semitism.

To not see the necessity of Zionism, or to refuse to see the necessity of Zionism, and to think of it as an ideology of cruelty, you have to be an anti-Semite, you have to be uneducated and ignorant. Then once you’ve been shown the truth, to persist in the idea, as Corbyn does, that “Zionism is a racist endeavor” — that’s the phrase that Corbyn likes — I think that’s a deeply anti-Semitic thing to say.

So as a writer, a Jewish writer, how do you process all this? How does it does enter your work? Do you try not to let it into your work?

It does enter my work. I mean, sometimes it enters my work overtly. In “The Finkler Question,” it was out there openly and talked about. I did write a very bleak novel called “J,” which did well in America, which took to its logical conclusion the non-Jewish longing to rid the world of Jews. Which is sometimes been explicitly stated: [to] imagine the world without Jews in it. That was a fairly bleak view. Because I do feel now that anti-Semitism can’t go away.

As a Jewish writer, you’ve been called the “English Philip Roth,” but you’ve sort of rebuked that and called yourself the “Jewish Jane Austen.” I just love this idea. I was wondering, does that quote come back to haunt you? I apologize if you’re tired of hearing it by now.

Can you expand on that a little?

It was something I spoke spontaneously. It was at a literary festival, and somebody asked that same question, “you’re often talked about as the English Philip Roth, does that phrase haunt you?”

And I said, when I first started writing, there hadn’t been many male Jewish novelists in England at that time, still aren’t many, and they see that we’re funny and I reminded the English of Woody Allen and Philip Roth and Saul Bellow, and then that’s what I became called. I was called the English Phillip Roth because he’s a novelist, and I am, and there are similarities. And I thought that was fine. I took it as a compliment; Philip Roth is a great writer. But I had not read Philip Roth and Saul Bellow and then made myself a novelist in their image, or even influenced by them.

But then I got bored with it because it was said with every novel. And I just said yeah, I’m fed up with it! So I said, “I rather think of myself as the Jewish Jane Austen,” cause that’s a good joke, and people got it as a joke. But I meant a few things by it: One is that my education, I was not in the American Jewish tradition. My education was in the English novel. When I went on to become a lecturer for seven or eight years, it was the English novel I taught. It was Dickens and George Eliot and Jane Austen — they were the people that I loved, and they still are. They were the influences on me. I was much more influenced by Jane Austen than I was by Philip Roth.

Shimi and The Princess talk a lot about their childhoods. I was wondering if your Jewish childhood or Jewish upbringing influences any of your characters?

I suppose it does in the sense that I live permanently with my childhood, as does Shimi. I think that’s a very Jewish thing. It can be debilitating; anything that’s always with you is debilitating. It’s beneficent also, there’s a feeling that I’m always rethinking my childhood. The serious family ethical obligations that being Jewish determines your whole subject matter. To that degree, whether I’m writing about Jews or not, the fact that I’m Jewish determines the nature of the way that I write.

This interview was condensed and edited for clarity.