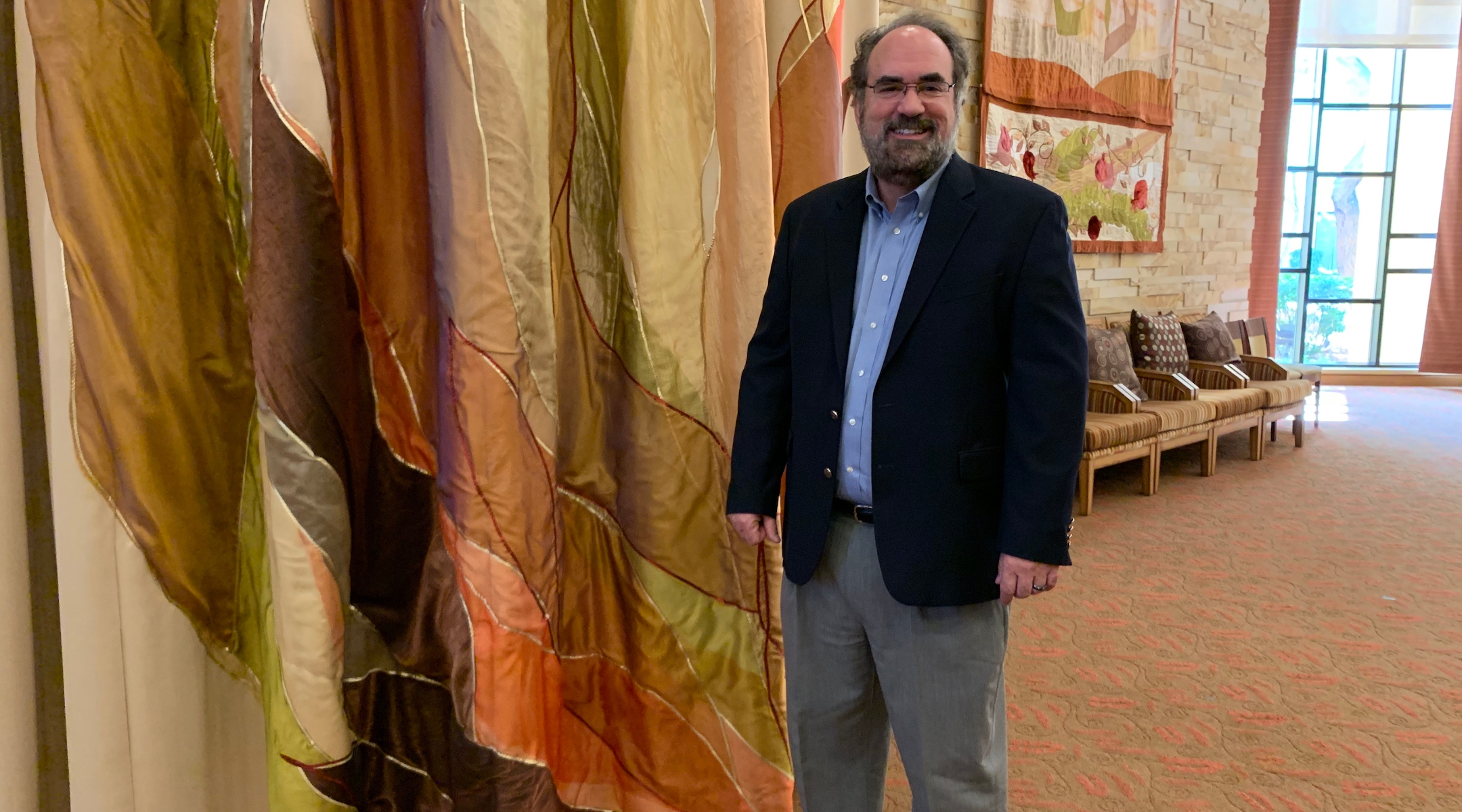 Rabbi Sanford Akselrad has been leading Congregation Ner Tamid in the Las Vegas suburb of Henderson since 1988. (Josefin Dolsten)
Advertisement

LAS VEGAS (JTA) — Congregation Ner Tamid is located a half an hour drive away from the Las Vegas Strip, where each luxury hotel seems more extravagant than the next and even on a Sunday morning people can be found crowding around blackjack tables and sitting in front of slot machines in the glitzy casinos.

But at the synagogue, located in the suburb of Henderson, people are lining up for something quite different. Kids are grabbing slices of pizza as they wait for Hebrew school to start. Some are already sitting in rows in the small sanctuary — the synagogue has two — practicing songs in Hebrew.

Rabbi Sanford Akselrad walks around a classroom asking whether the kids remembered to bring money for tzedakah, or charity. Most forgot, but one girl drops a coin in his box.

Akselrad has been serving as the rabbi of the Reform synagogue, which counts some 600 families as members, since 1988. He says he is the longest-serving rabbi at any one synagogue in the state.

The Jewish Telegraphic Agency sat down with Akselrad to learn more about his experience and the changes he has seen in the community. The conversation has been edited for clarity and length.

JTA: How did you wind up in Las Vegas?

Akselrad: I was ordained in 1984 in Cincinnati by the Hebrew Union College-Institute of Religion. My first pulpit was in Columbus, Ohio, but I’m originally from Palo Alto. My dad was a rabbi in the community for many years. My wife is an only child who grew up in Reno.

After a few years it became time to look for my own pulpit, and my dad wanted me to go to Redondo Beach or Champaign, Illinois, but Las Vegas was open.

So really, we came out for a weekend and by the end of the weekend I had signed a contract.

What made you change your mind about coming here?

When they told me about some of the issues that my predecessors had gotten involved in, things they didn’t like — one would gamble, one would do weddings in these chapels — I thought, “Well, this is a pretty low bar, I’m not going to do any of those things.”

They really wanted a traditional synagogue that happened to be in Las Vegas. And I said, “That pretty much sums up what I want.”

I had to get beyond the stereotypes of gambling. I’ve been here 30 years and I think if I’ve gambled 25 cents, that’s a lot — that’s just not my personality.

Is gambling a problem in your community?

All the years I’m here, there have been some cases of problem gambling, but the temple doesn’t really have a program [for gambling addicts].

So I think the people who do have a problem with gambling, they seek help. And for sure there’s got to be problems, but they haven’t necessarily come to me and said, “Rabbi, I have a gambling problem.”

I’ve become aware of it with a few people, just word of mouth. They get in trouble trying to pay their dues, but not as frequently as you might think.

Do a lot of your members work in the casino industry? What types of jobs are common?

My current president is a vice president for Caesar’s. The incoming one is a scrap metal dealer. The last one was someone who worked on zoning issues and other things with the city. Then I had someone who was a homemaker who went on to become a senator, Jacky Rosen.

How has the Jewish community changed since you came here?

We started at about 60 families, a very, very modest building, but I’d done a little bit of homework. There were about 20,000 Jews and really one main Conservative synagogue and two smaller synagogues.

I figured, “Boy, there’s a lot of room for growth.” And today there are about 80,000 Jews here and about 28 synagogues. Not all of them are with a building and a traditional synagogue model, but that’s about what there are right now.

What’s the biggest challenge for the Jewish community in and around Las Vegas?

Our biggest challenge is lack of affiliation. I would say it’s probably about 8 percent of those 80,000 Jews that affiliate. That’s it. It’s very low.

We have so many people [who relocated here] who said, “Oh, I paid a building fund up in Cleveland,” “I was a temple president there,” “I was a sisterhood [member] — did that, done that, been there, that’s it.” I’d say 40 percent of the Jewish community is 65 or older, so in their retirement years they still might join, but they don’t want to get involved like they did when they were younger and their kids aren’t here.

What are the biggest misconceptions about Las Vegas that you’ve encountered in your work?

When I took this job, when I would go to conventions, everyone used to kind of tease me, ‘Do you have slot machines in the synagogue? Hahaha.” They viewed Las Vegas as kind of a joke, like, “Really, there’s religion in Sin City?’’

But the Strip is not Las Vegas. The people who live here, unless they work there, rarely go there. It’s crowded and it’s expensive, so we stay away.