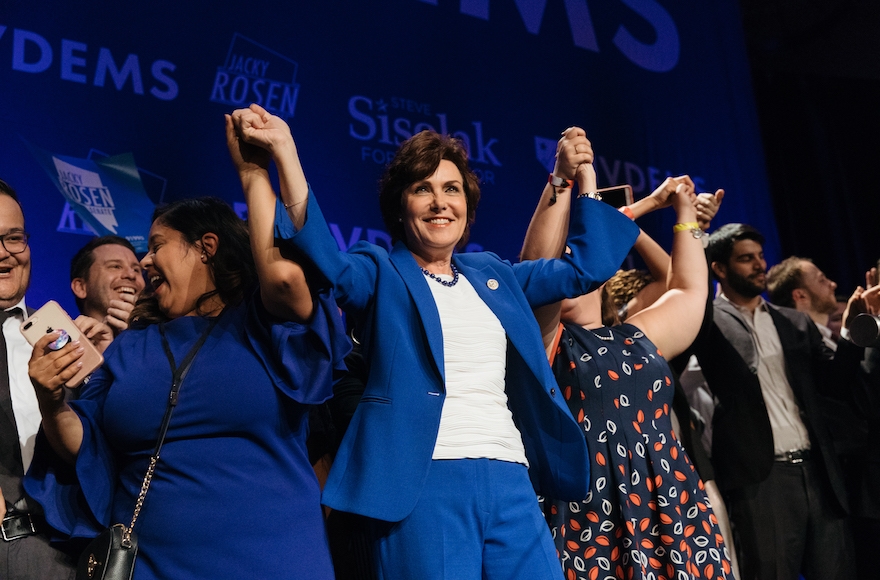 Jacky Rosen celebrates with supporters after winning a Senate seat in Nevada at Caesars Palace in Las Vegas, Nov. 6, 2018. (Mikayla Whitmore for The Washington Post via Getty Images)
Advertisement

Rosen won with 50.8 percent of the vote to Heller’s 45 percent in Tuesday’s election.

The former software developer was talked into running by former Sen. Harry Reid, who believed she was the likeliest challenger to unseat Heller. Reid, who retired last year as the party leader in the Senate, remains a powerhouse in Nevada politics and still has a say in whom the party advances.

Prior to her successful congressional run last year, Rosen’s only elective experience was as president of Ner Tamid, a Reform synagogue in suburban Las Vegas.

The focus of Rosen’s campaign has been education — the public school system in Nevada is notoriously underfunded — and the environment. She has taken a centrist pro-Israel line, saying she would have opposed the 2015 Iran nuclear pact.

Following Heller’s phone call to concede, Rosen tweeted: “Thank you, Senator Heller for your many years of public service to our state.”

Thank you, Senator Heller for your many years of public service to our state. https://t.co/BkZwqMl1bs