(JTA) — In the aftermath of the shooting outside a synagogue in the German city of Halle, local authorities are rethinking their approach to securing the country’s Jewish communities.

Only the building’s heavy fortified doors prevented the gunman from entering the synagogue last week on Yom Kippur. Josef Schuster, the president of the Central Council of Jews in Germany, said it was “scandalous” that there were no police outside the Halle synagogue on Judaism’s holiest day, when attendance by worshippers is at its highest.

Some German states are now moving to ensure that situation isn’t repeated.

In the eastern state of Thuringia, authorities have agreed to post armed officers outside synagogues during services, Der Speigel reported. In Hesse, security will be provided at every synagogue and Jewish institution during Jewish holidays, a police spokesman said. And in Bavaria, synagogues were added as stops to routine police patrols following the attack.

At the federal level, Interior Minister Horst Seehofer said that police will “have to take a closer look at the gamers’ scene,” a reference to the shooter’s frequent use of online gaming platforms. That comment sparked protests by German gamers, who fear an invasion of their privacy based on what they call a false generalization.

German Jewry’s Values Initiative, a nonprofit that has positioned itself as a mainstream think tank for German Jewish communities, has proposed a seven-point plan for improving security for German Jews, including better real-time monitoring of video streaming platforms like the ones that the Halle gunman used to broadcast his assault for about 30 minutes.

After the synagogue attack, the group called for police protection of “all synagogues, Jewish and Israeli institutions in Germany,” charging that police had “misjudged” the threat facing smaller communities like Halle. It also recommended improving police response time, noting that it took 16 minutes for officers to confront the shooter.

“It is time that Germany decides how it deals with hatred of Jews and other inhuman hatred forms,” Elio Adler, the group’s chairman, wrote. “The previous methods are clearly not enough.”

German officials seem to agree. They were quick to condemn the Oct. 9 attack and reassure the Jewish community of their support. Chancellor Angela Merkel attended a vigil in Berlin that day and told Jews in Halle that her government was committed “to do everything possible so that you can live safely.”

Merkel said the attack “shows us that this is not so simple and that we must do even more,” though she did not specify what further action she envisaged.

“In Germany’s larger cities, Jewish communities get police protection and hire security firms additionally. But small communities like Halle have neither, leaving them exposed,” he said. 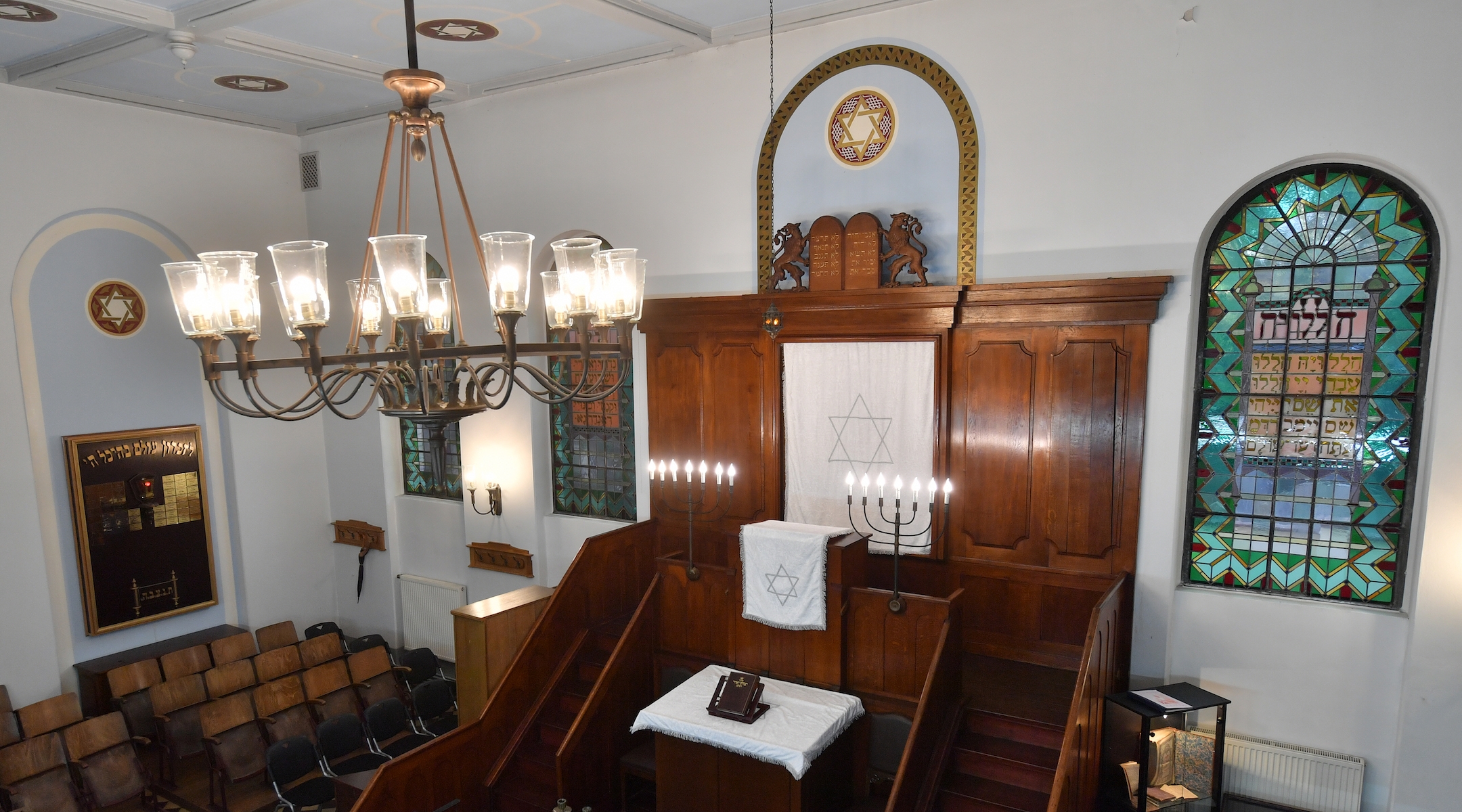 A view inside the synagogue in Halle, Germany, that was targeted by a gunman on Oct. 9, 2019. (Hendrik Schmidt/picture alliance via Getty Images)

In Frankfurt, the Jewish community of 6,600 members pays about $1.2 million a year for private security to supplement the protection provided by police, Leo Latasch, the head of security for the community, told Der Spiegel last week.

In Berlin, the Jewish community and the government split the cost of private security firms, according to Sergey Lagodinsky, a European Parliament lawmaker and a former Jewish community leader in the city.

The situation is radically different in neighboring France.

After the 2015 slaying of cartoonists at the Charlie Hebdo magazine and four Jews at a kosher store, the government launched Operation Sentinel, which deployed thousands of troops around Jewish community buildings and other potential targets. The French state bears nearly all the security costs for Jewish institutions, about $1.2 million per day.

But the effort has its drawbacks. Synagogues across France now resemble fortresses, and the heavy police presence has undermined a sense of normalcy among many French Jews, about 30,000 of whom have moved to Israel since 2013.

Sandra Sebbah, a Jewish mother of four from Pavillons-sous-Bois, a northeastern suburb of Paris, said the soldiers outside her children’s Jewish school only amplify her anxiety about their safety. She encourages her children to “live somewhere else, like normal people and not like this, where I am afraid every minute they’re not home — especially when they’re at school,” she told the Jewish Telegraphic Agency.

Revach said the French model can be tweaked to be made less restrictive.

“There’s actually no need for soldiers with guns and police cars in front of synagogues,” the European Jewish Congress’s security expert said. “Technology, including surveillance cameras and good doors like the one in Halle, can be used smartly to reduce that sort of presence.”

As in other European synagogues, the doors at the Halle synagogue were reinforced in recent years as part of a security initiative funded by the United Israel Appeal with support from donors including Mikhail Fridman, German Khan and Peter Aven. The attacker, identified as a far-right extremist named Stephan Balliet, shot at the doors and tried to use explosives to blow them up. When he failed, he shot dead a woman who passed by on the street and then killed another man at a nearby kebab shop.

“This was an effective passive security measure that saved lives,” Revach said, “but it needs to be coupled with fast response and surveillance.”

Revach said new technologies, like facial recognition software that can provide early warning when a known threat is spotted near a Jewish institution, can give law enforcement an edge. He said that the deployment of these technologies has been hampered by European Union privacy laws.

“The solution is smarter use of the resources at hand, not throwing more soldiers and guns at Jewish institutions,” Revach said. “It costs too much money to be sustainable and frankly only refers perpetrators to the more vulnerable targets.”

Some German Jews wonder whether anything their government does at this point is sufficient to allow Jews to live in the country safely. Henryk Broder, a Jewish author and one of Germany’s best-known celebrities, takes a pessimistic view.

“It’s time to face the truth: There is no place for Jews in Europe, or at least no safe place for them,” he told JTA. Jews can either leave or “spend the rest of their lives in a gated community, being protected by the state.”

Lagodinsky, the European Parliament lawmaker, agrees that the Halle killings are a “wake-up call” from a security perspective, but insists that German Jewry will prevail despite the security challenges.

“We must become more visible, not less,” Lagodinsky said. “We must not close inwards, but open up and build bridges to allies who understand that it’s not Jews who need to fight anti-Semites but the entire society.”