5 female Jewish superheroes everyone should know 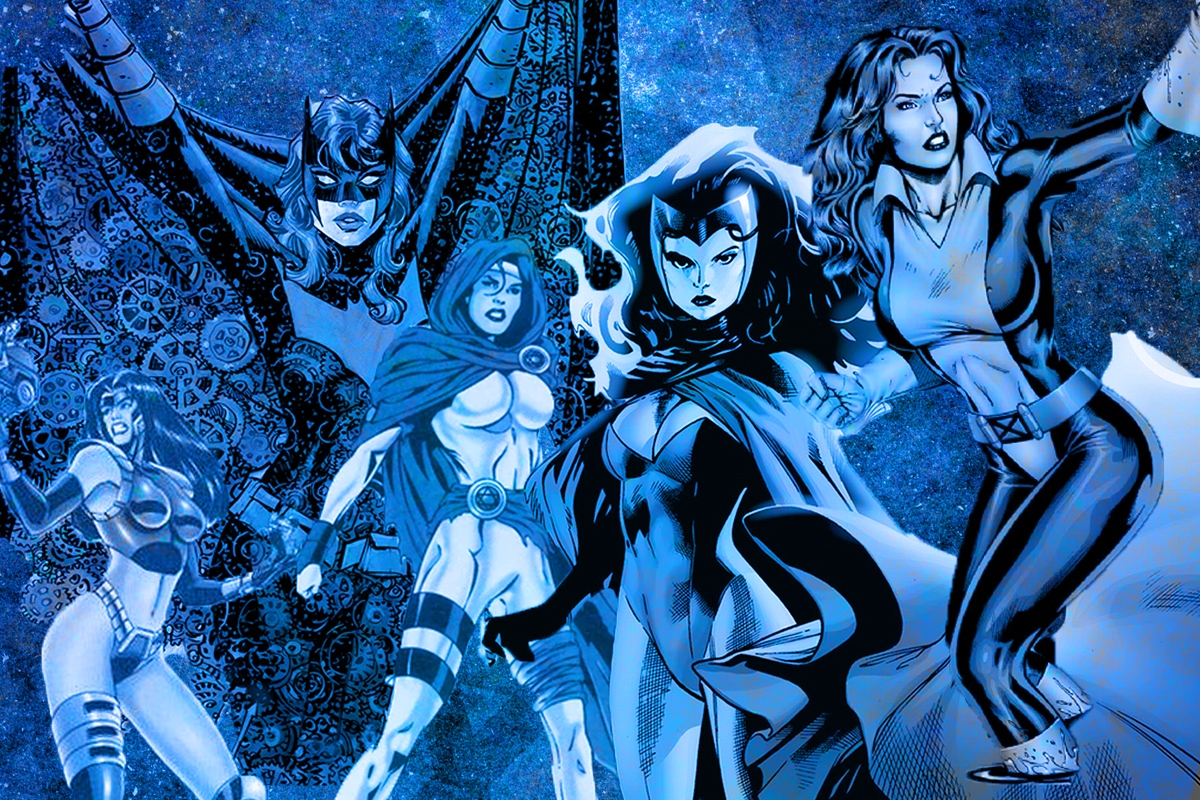 Over the past decade, comic books and superheroes have become a staple for mainstream pop culture. But did you know that they are super Jewish?

The industry was created by Jews who were prevented from working at American newspapers in the 1930s by anti-Semitic quotas. And these creators did not shy away from their Jewishness, taking on Jewish issues like the Holocaust and domestic anti-Semitism through their art.

With the rising popularity of the industry, more and more Jewish superheroes were created, and some pretty cool Jewish women emerged as some of the most recognizable characters on the planet.

So here’s a list, in no particular order, of badass Jewish superheroines that everyone can look up to:

Kate Kane was introduced to DC Comics in July 1956. In the early 1950s, a psychiatrist claimed that Batman was gay due to his relationship with Robin. DC was just a bit homophobic and scared of tarnishing Batman’s reputation. So Robin was removed from the spotlight and Batwoman started to appear.

Little did that psychiatrist know that in 50 years, in 52 Issue #7, Batwoman would be reintroduced as a Jewish lesbian woman. Yes, really!

In every iteration and alternate universe since her reintroduction in 2006, Kane has been a proud lesbian Jew. In one, she lived during World War II and spent her time taking down Nazis with other amazing Justice League women. In others, she has celebrated Hanukkah with her girlfriend and Shabbat with a young Jewish girl in 1940s Berlin.

Batwoman recently became a part of DC’s Arrowverse on the CW. She has her own show, played by Ruby Rose. The best part? The producers have confirmed that she will still be Jewish on the show. Get ready for a Hanukkah episode!

This one is a little weird, but I still find her pretty badass.

Masada is a member of Team Youngblood, a super-powered squad overseen by the U.S. government. The Israeli-born warrior, who was first published in 1992 by Image Comics, can turn into a giant and acquires her powers from — here’s the weird part — the souls of the Jews who sacrificed themselves at Masada and anyone else who sacrificed themselves for Judaism. Yikes? I choose to think of her superpowers in a positive way, however. To me, she’s kind of like a superhero whose powers are being on the receiving end of extreme Jewish guilt.

Wanda and her twin brother, Pietro, are Jewish and Romani. Their Romani mother raised them and hid them from their villainous Jewish mutant father, Magneto, out of fear. The twins didn’t find out Magneto was their father was until they were adults, so they never practiced Judaism.

Scarlet Witch is among the most powerful characters ever introduced to her universe. She uses chaos magic and telekinesis, has brought a couple of people back from the dead, and can take away other people’s powers. Initially she follows her father and joins the Brotherhood of Evil Mutants, but eventually ditches them for the Avengers.

Despite not being raised Jewish, Jewishness still influences her character. After all, her parents met in Auschwitz. The trauma of the Holocaust is still fresh for both sides of her family — first appearing in Marvel Comics in 1964 as an adult — and her storylines center on how she is targeted for being a mutant.

So even after joining the good side, she struggles to cope with intergenerational trauma and the persecution of mutants. In one series, she also goes as far as creating a utopia where superhumans and mutants are not feared but admired. (It didn’t end well, though, because she ended up taking away most of the mutants’ powers by accident.)

Scarlet Witch is particularly well-known for her role in the Marvel Cinematic Universe but, sadly, both her Jewish and Romani identities were ignored when bringing this character to the big screen. She even volunteers for a Hydra (a Nazi subgroup) experiment, which erases her cultural background. While it would have been amazing to see such a unique background in such an impactful series of movies, Marvel Studios just wasn’t ready to take on such a task.

Sabra (aka Ruth Bat-Seraph)
Sabra, true to her name, was born in Jerusalem and grew up on a kibbutz for people with superhuman abilities following her first appearance in 1980. Sadly, her powers have nothing to do with hummus.

In the Marvel universe, Sabra was the first human with superhuman abilities to work in the Mossad. With her enhanced strength, stamina, speed and agility, she is a force to be reckoned with. And in true Israeli fashion, she uses special cutting-edge technology to help her fly, even proudly displaying the Star of David on her blue and white costume.

Sabra spent most of her early superhero career defending Israel. Once she held up the Western Wall in Jerusalem because earthquakes threatened to destroy it. However, when an anti-mutant campaign called Operation: Zero Tolerance gained traction globally, Sabra left Israel and teamed with the X-Men. Yes, this badass teamed up with the Hulk, Spiderman, Iron Man and the X-Men to help fight some of their signature villains. She may not appear in comics much anymore, but she is still seen occasionally defending Israel.

First appearing in the Uncanny X-Men comics in 1980, Kitty Pryde was just 13 years old when she arrived at Charles Xavier’s School for Gifted Youngsters. She was recruited for the school because of her ability to phase through objects. Shadow Cat started training as a superhero immediately and soon became a vital part of the X-Men. However, before moving to the school, she was raised in a Jewish household in Deerfield, Illinois.

Like her name would suggest, Kitty Pryde has a ton of pride in her Judaism. She usually wears a large Star of David necklace and regularly stands against anti-Semitism. She even visited the U.S. Holocaust Memorial Museum in Washington, D.C., with Magneto (a Holocaust survivor and a foe of the X-Men).

In one speech, Kitty proclaimed, “I am Jewish. I am a Mutant. And I want people to know who and what I am. I tell people because, hey, if we’re going to have a problem with it … I’d like to know.”

Pryde doesn’t compromise any part of her identity and has become a symbol of pride for many young Jewish women — like me.

Sure, she may be a villain, but Harley Quinn is one of the most recognizable characters to come from the comic industry. When Quinn debuted in September 1992, she was The Joker’s sidekick and love interest, but she was so popular that DC Comics created a series just about her. Harley Quinn still is one of DC’s most popular comic book series, and in 2020 she will lead in the DC Extended Universe’s “Birds of Prey” movie.

Before adopting the identity of Harley Quinn, Dr. Harleen Quinzel was a psychologist at Arkham Asylum who fell in love with her patient, The Joker, and broke him out of the insane asylum (fun fact: Her origin story is award-winning). Along with The Joker, Quinn has had a few romances, including Batman and Poison Ivy.

She has been confirmed as half-Jewish and half-Christian. Quinn is known for her thick New York accent and use of Yiddish, so cross your fingers for a few “oys” thrown into the script.

These superheroes may not actually be canonically Jewish, but the actresses who have brought them to life very much are.

Gal Gadot’s Wonder Woman has become a role model to young Jewish (and non-Jewish) girls across the globe. Gadot served in the Israeli army for two years and became Miss Israel in 2004. She is best known for playing Wonder Woman from the DC Extended Universe and Gisele from the “Fast and the Furious” franchise. Gadot also will play Hedy Lamarr, an actress of Jewish descent whose inventions led to WiFi and GPS technology.

About a month ago, Natalie Portman was added to the list of awesome Jewish women who are playing onscreen superheroes. Marvel Studios recently announced that Portman’s Jane Foster will hold the title of Mighty Thor — that’s right, Mighty Thor, not Female Thor — within the next few years. This hammer-wielding doctor (Jane Foster is a Ph.D. and MD) will definitely be a sight to see in the next phase of the Marvel Cinematic Universe.

Rounding out the list? Zoe Kravitz was just cast as Catwoman in the new version of Batman, “The Batman,” in possibly the best casting decision ever made. We can’t wait.

These 10 Yiddish words will get you through quarantine

By Ellen Scolnic and Joyce Eisenberg May 20, 2020 1:55 pm
from Kveller This link opens in a new window