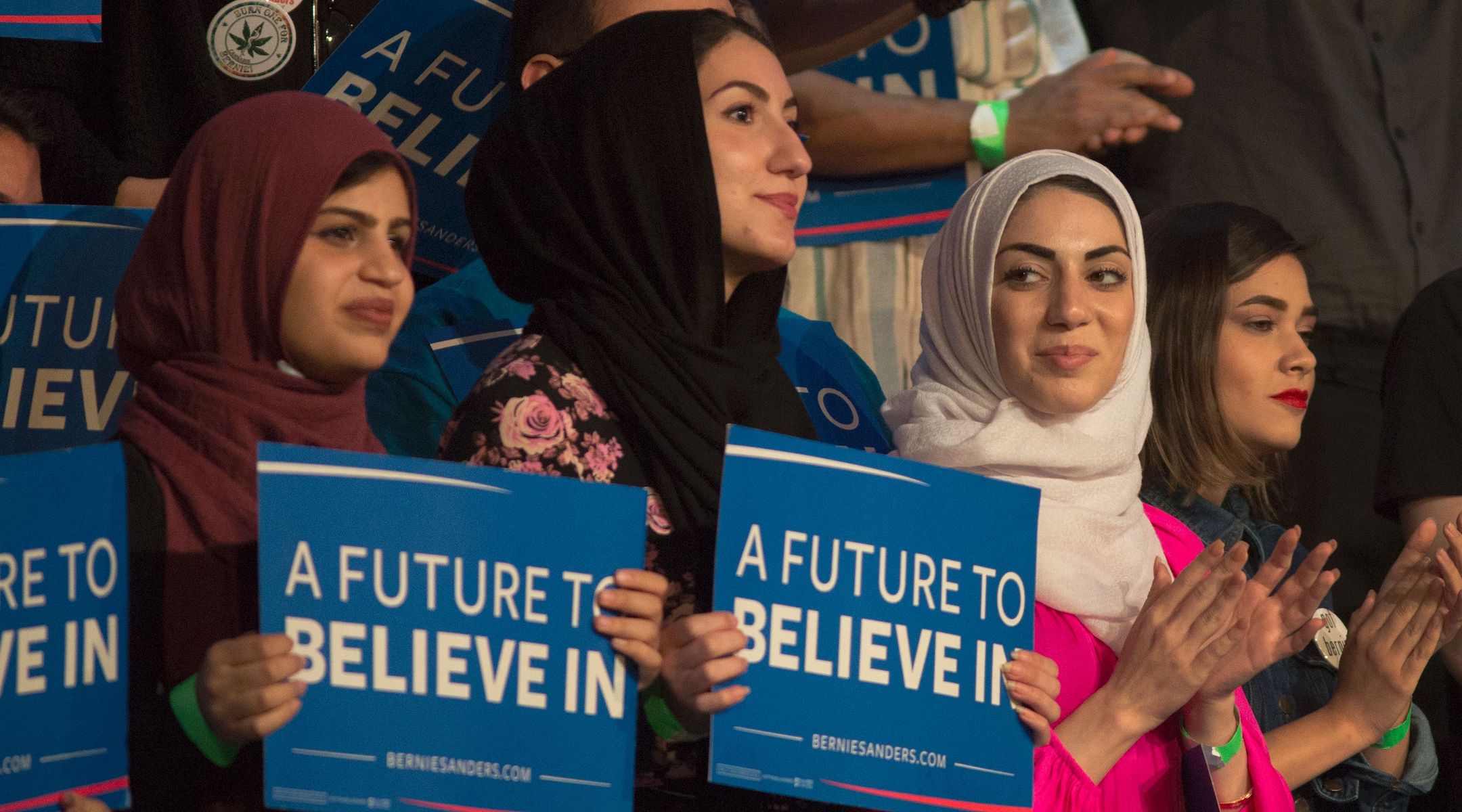 (JTA) — Bernie Sanders was one of only two Democratic presidential candidates to address the Islamic Society of North America Convention in August, the largest annual gathering of Muslim Americans in the country.

Organizers invited the 10 highest-polling contenders at the time to the Houston event, but the Vermont senator and Julian Castro were the only ones to accept. Sanders received loud applause and a standing ovation for a speech that repeatedly invoked his refugee father’s flight from poverty and anti-Semitism in Poland.

Among a crowded field of Democratic hopefuls, the Jewish candidate is one of the few who have made repeated efforts to reach out to Muslim Americans, community leaders told the Jewish Telegraphic Agency.

“Sanders has taken an active role in elevating Muslim communities and Muslim spokespersons in the national presidential debate,” said Robert McCaw, director of the government affairs department at the Council on American-Islamic Relations. “He’s not shy in going into Muslim spaces publicly and endorsing our issues and making them a part of the campaign.”

Sanders was the first presidential candidate to visit a mosque following the March shooting at two mosques in New Zealand. With his appointment of Faiz Shakir as campaign manager, he became the first major presidential candidate to appoint a Muslim in that role. He has picked high profile Muslims as surrogates — including Women’s March organizer Linda Sarsour and comedian Amer Zahr, both Palestinian Americans.

Prominent Muslim politicians, in turn, have endorsed Sanders. They include Rep. Ilhan Omar, D-Minn., who came out for Sanders last week. Rep. Rashida Tlaib, D-Mich., is set to join Sanders at a rally in Detroit this weekend and reportedly is going to endorse him as well. Omar and Tlaib, the first Muslim women elected to Congress, have been the repeated target of attacks by President Donald Trump. 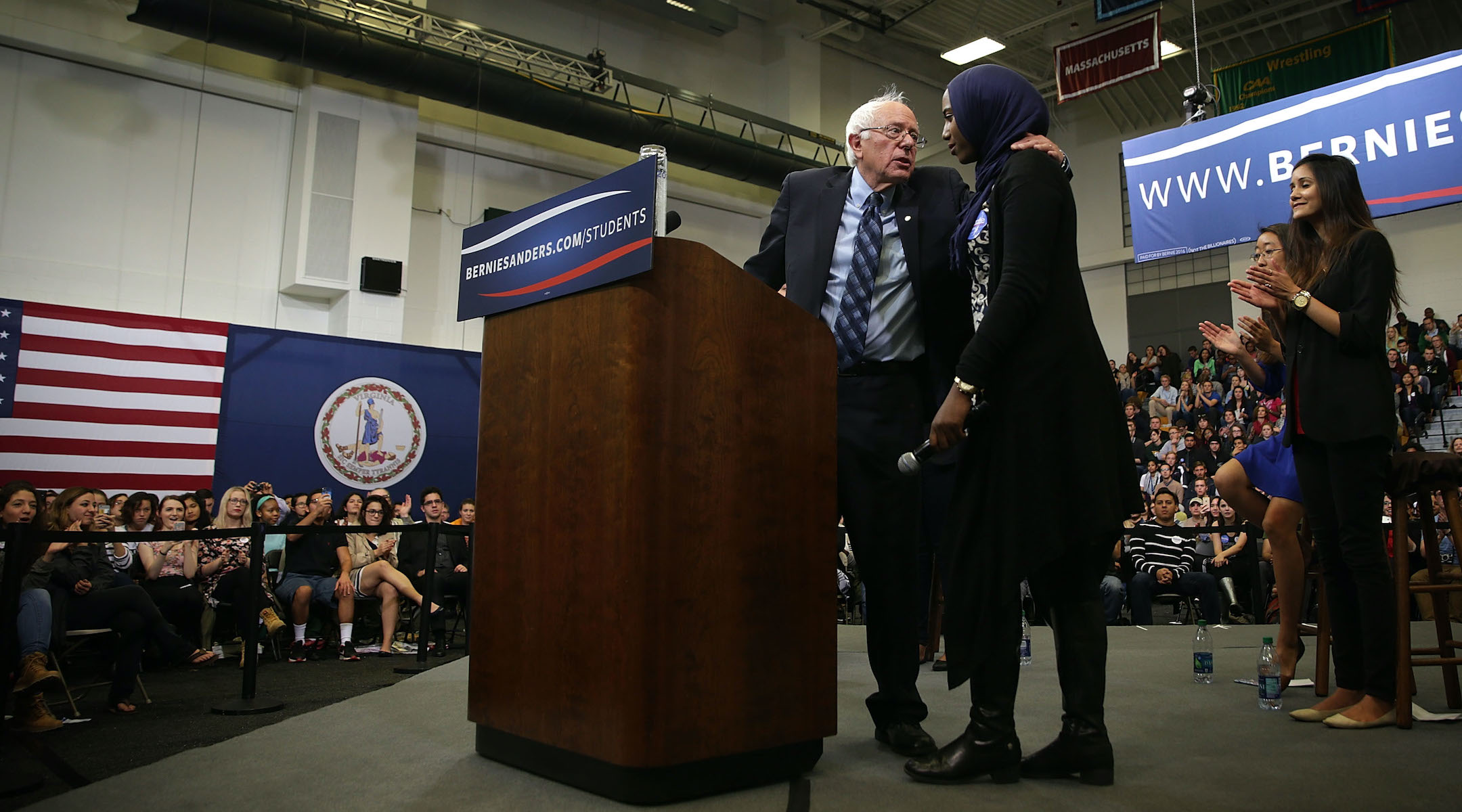 It’s hardly a given that Muslim Americans would support a left-leaning Democrat.

The Muslim-American community is estimated at 3.45 million and it’s diverse, including immigrants from the Middle East, Africa and Asia, as well as a sizable number of African-Americans born in the United States. The community is close to split evenly between self-described liberals and conservatives.

The 2000 election is often seen as a turning point. That year, a political action committee made up of Muslim groups endorsed Republican George W. Bush, who had made efforts to reach out to the Muslim community, over Democrat Al Gore. Polls are inconsistent on how Muslims actually voted in that election. CAIR said 70 percent of Muslim-American voters backed the GOP candidate, while a study by the pollster Zogby International said the number was just 42 percent.

But the Iraq War and the Patriot Act were unpopular among Muslim Americans, and by the next election both Zogby and CAIR were showing overwhelming Muslim support for John Kerry, the Democrat running against Bush.

“The Democratic Party has more appealing factors right now than the Islamophobic sentiment that is seen exuding from the Republican Party,” McCaw said.

Still, a 78-year-old Jewish socialist from Brooklyn isn’t an obvious favorite among Muslim Americans, whose relations with U.S. Jews have often been complicated by differences over the Israeli-Palestinian conflict.

But a number of factors have drawn the communities closer in recent years, according to Suhail Khan, a conservative activist who served as legal counsel and transportation adviser in the George W. Bush administration. These include similar views on domestic issues, better social ties and a shared sense of vulnerability in the face of mounting hate crimes.

“The conversation and the relationship between the American Muslim community and the American Jewish community has done a 180-degree change, and that’s reflected in the support for Bernie,” said Khan, who doesn’t support Sanders but understands his appeal to fellow Muslims.

Sarsour, the Sanders surrogate and former Women’s March organizer, did not respond to requests for comment, but she told the Los Angeles Times last month that Sanders “crushes the stereotype that Muslims and Jews are natural enemies.” Sarsour also cited Sanders’ defense of Tlaib and Omar in the face of Trump’s attacks and his being “outspoken on Palestinian rights” as reasons for Muslim support.

Sanders has stood out among Democratic contenders for his willingness to criticize Israel. He was the first serious candidate to suggest that aid to Israel could be contingent on its compliance with U.S. policy, although Sen. Elizabeth Warren has now embraced that view. He has also said that he supports Israel’s right to exist in peace and security and called himself “100 percent pro-Israel,” but repeatedly has come down hard on the government of Prime Minister Benjamin Netanyahu, including calling it “racist.”

“There is a sense that this is a guy who would do with us and respect us in a way that other candidates wouldn’t,” said James Zogby, a former Democratic National Committee member and director of the Arab-American Institute who has endorsed Sanders.

For some Muslim voters, Sanders’ Jewish identity makes them even more likely to support him.

“I think in terms of being a socialist Jewish guy from Brooklyn, it appealed to me because I know a couple of socialist Jews from Brooklyn and my parents grew up around lefty Jewish people,” said Hamzah Raza, a 23-year-old graduate student in Islamic studies at the Harvard Divinity School.

Raza, who grew up in Maryland and New Jersey, organized a group of young Muslims to pray for Sanders following news earlier this month that he had suffered a heart attack. Some 40 young Muslims from around the world ended up taking part in a complete recitation of the Quran on behalf of Sanders on the messaging platform WhatsApp, as first reported by the Religion News Service.

“They were really eager,” Raza told JTA. “People really wanted to be a part of it.”

Raza said the candidate’s outreach to the community and his progressive stances on a number of issues appeal to him, including health care, foreign policy and the Israeli-Palestinian conflict.

“I wouldn’t say Muslim Americans are a monolith,” he said. “I don’t think we’re behind any particular candidate. But I would say Bernie Sanders is by far the most popular.”