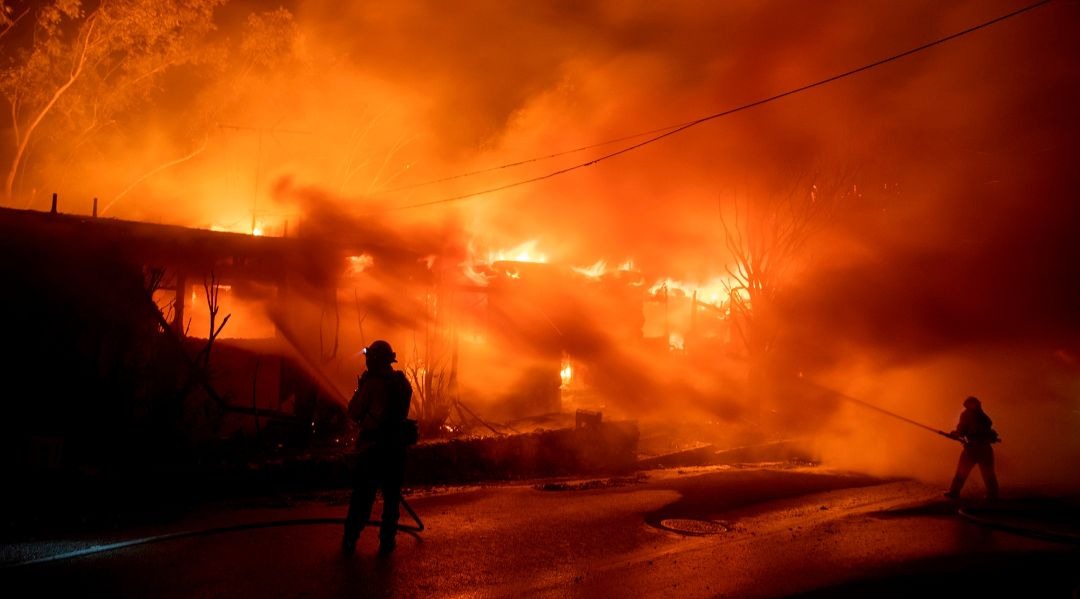 (JTA) — Wildfires across California have led to the evacuations of several Jewish institutions in the Los Angeles area and communities in the northern part of the state.

The Getty Fire in Los Angeles, which erupted early Monday morning in the hills north of the Getty Center, has burned more than 600 acres and caused the evacuation of some of the wealthiest neighborhoods in California.

Among the Jewish institutions forced to close temporarily due to the Getty fire were the Skirball Cultural Center, American Jewish University and Milken Community Schools, the Jewish Journal of Los Angeles reported. Milken removed its Torah scrolls to safety, according to the report.

The Leo Baeck Temple, which said in a message on social media that the Getty fire is burning very near its building, also removed its Torah scrolls and closed.

Some other Los Angeles-area synagogues have closed temporarily but are working to help match up community members who are willing to host families displaced by the fire and those who need assistance. Synagogues farther from the fire are providing a place to get meals, water or other assistance for those who are stranded.

Several Jewish communities in Sonoma County, in northwestern California, were forced to evacuate due to the Kincade wildfire, J. The Jewish News of Northern California reported.

As of Tuesday morning, the Kincade fire had burned more than 74,000 acres and was only 15 percent contained. More than 4,000 firefighters have been battling a blazes that has destroyed more than 100 buildings, forcing 185,000 people to evacuate and leading to power outages for hundreds of thousands of homes and businesses. The fire started on Oct. 23 and has spread due to dry conditions and high winds.

JCCs and synagogues in the region have offered their support for those affected, including providing hot showers, free charging and WiFi, and activities for children, according to the J. newspaper.

On Sunday, Gov. Gavin Newsom declared a state of emergency as a result of the wildfires. As of Tuesday morning, there were at least 11 active fires at levels of containment ranging from 15 percent to 95 percent, according to Cal Fire.