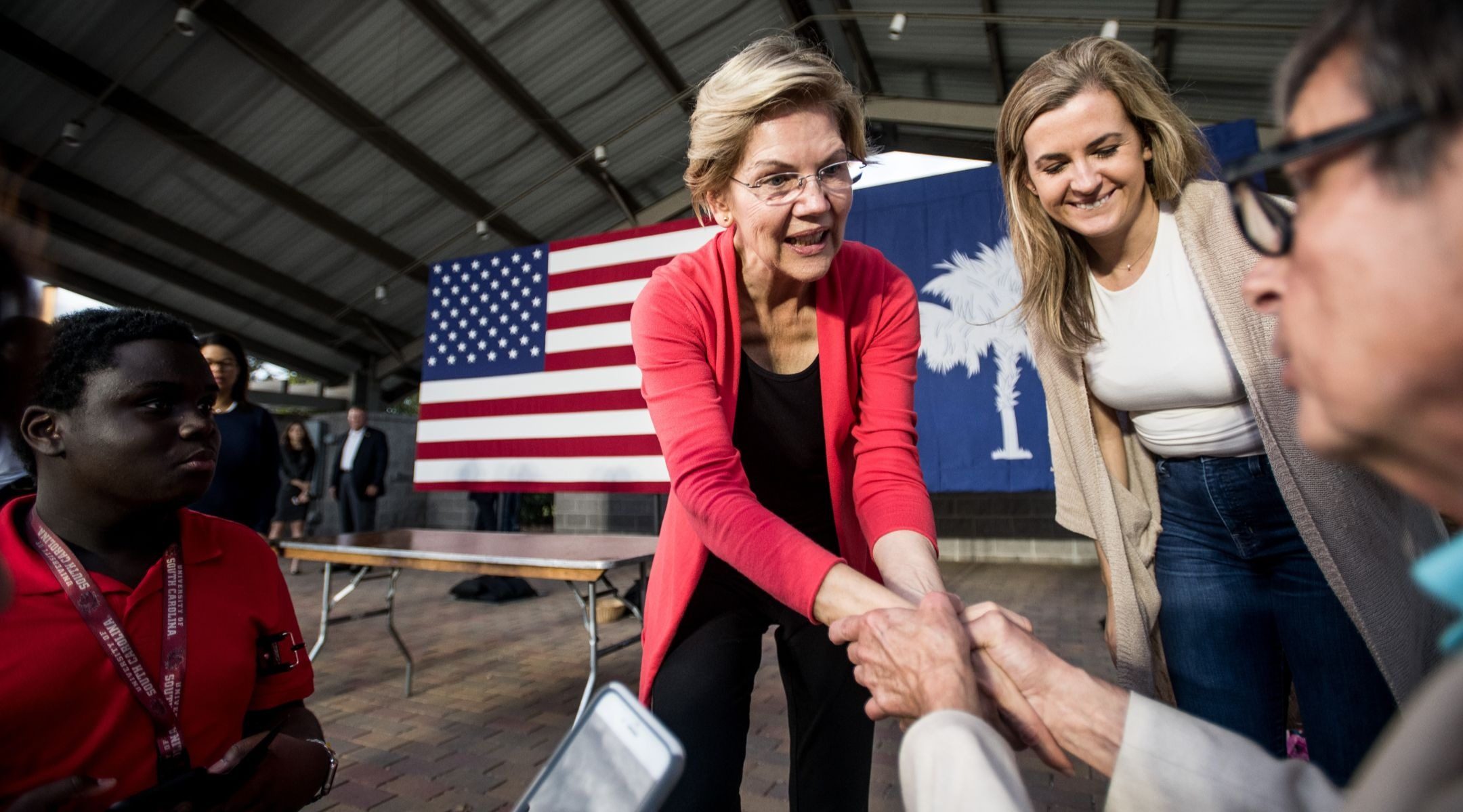 WASHINGTON (JTA) — When it comes to pressuring Israel, Elizabeth Warren doesn’t have a specific plan.

The senator from Massachusetts, who has caught up in polling with front-runners for the Democratic presidential nomination, now faces intensified scrutiny as a newly viable contender. And what has emerged is that Warren is vague about how she would pressure Israel if she perceives it to be acting contrary to U.S. interests.

In a video submitted to this week’s annual conference of J Street, the liberal Jewish Middle East policy group, Warren offered details on other aspects of her Israel policy and was clear she is willing to lean on Israel. But she declined to specify exactly how she might do that.

“We must find ways to make tangible progress on the ground toward a two-state solution,” she said in the video.

“Sometimes that might mean finding ways to apply pressure and create consequences for problematic behavior as previous Democratic and Republican presidents have done,” she said. “For example, if Israel’s government continues with steps to formally annex the West Bank, the United States should make it clear that none of our aid should be used to support annexation.”

Last week in Iowa, Warren was pressed on this question by a reporter.

“Everything is on the table,” she said, but would not elaborate.

The question matters as a willingness to leverage aid to shift Israel’s policy is emerging as a litmus test for Democrats. Some on the left insist that aid be used to pressure Israel, while moderates say that’s a step too far.

J Street announced this week that it was ready to advocate for U.S. pressure on Israel if Prime Minister Benjamin Netanyahu makes good on his pledge to annex parts of the West Bank. And activists with IfNotNow, a Jewish group that is sharply critical of Israel’s occupation of the West Bank, have been pressing Democratic candidates about whether they would use U.S. assistance to pressure Israel to end the occupation.

Overall, Warren’s Israel policy typifies how she straddles the party’s center, exemplified by Vice President Joe Biden, and its left, whose current flag-bearer is Sen. Bernie Sanders of Vermont.

Like Sanders, Warren can be a tough critic of Israel’s government. But she also emphasizes the dangers facing Israel in a neighborhood in turmoil, as Biden does. Like both, Warren has pledged to reverse President Donald Trump’s decision to cut off aid to the Palestinians.

And though Warren, like Sanders, has said she is ready to leverage aid, she won’t specify how.

Sanders has been specific on the aid question. At the J Street conference, he said he was ready to take a chunk of U.S. aid and divert it to humanitarian assistance for Palestinians in Gaza.

A president can pressure Israel in a number of ways. They include reducing the approximately $4 billion in loan guarantees provided by the United States, cutting some of the $3.8 billion in annual military assistance and supporting efforts to label export goods produced in the West Bank.

The Jewish Telegraphic Agency put the aid question directly to Alexis Krieg, a spokeswoman for the Warren campaign. In reply, Krieg did not address the question.

But there may be a clue in what Warren told J Street when she said “as previous Democratic and Republican presidents have done.” No president has leveraged military assistance to pressure Israel since 1981, when Ronald Reagan withheld the delivery of fighter jets for two months after Israel destroyed Iraq’s nuclear reactor. But more recently, Presidents George H.W. Bush, Clinton and George W. Bush withheld loan guarantees from Israel commensurate with what it was spending on West Bank settlements. Obama ended the practice, but the law allowing a president to do so remains on the books.

Krieg did provide specifics in areas unrelated to aid. Along with Warren’s recent statements and her record as a senator, a picture emerges of how she views the Middle East:

“Two states” is paramount: This is what formed the bulk of Warren’s statement to J Street and what she has repeated on the stump. “Senator Warren believes a two-state solution is the outcome that is best for U.S. interests, for Israel’s security and its future, and for ensuring Palestinian rights, freedom and self-determination,” Krieg said. “As president, she will seek ways to preserve the viability of the two-state solution on the ground.”

Doing a 180 on Trump: Like other Democratic candidates, Warren says she will reverse Trump policy decisions on the Israeli-Palestinian conflict, including restoring aid to the Palestinians, resuming support for the U.N. agency that assists Palestinian refugees and inviting a Palestinian envoy back to Washington.

Focus on Gaza: Krieg said Warren would focus on the “humanitarian catastrophe” in Gaza. “Senator Warren supports immediate steps to increase access to water, electricity and health care in Gaza, as well as increased freedom of movement,” Krieg said. “As president, she will seek a political arrangement that ends the rocket attacks and blockade and brings about the political reunification of Gaza with the West Bank.”

Keeping it public: Israeli leaders and their American supporters typically prefer presidents to keep their differences with Israel on the down-low. Warren has made clear she is willing to upbraid Israel publicly. Over the last two years, she has criticized Israel’s treatment of protesters on the Gaza border, its plans to destroy unlicensed Palestinian homes and Netanyahu’s proposal for annexation of the West Bank. She also called Netanyahu corrupt. She has hired as a staffer Max Harris, a founder of IfNotNow, although he is reportedly not dealing with Israel issues. “Let’s be clear: We can speak out against the far-right-wing policies of the Netanyahu government like annexation and settlements while supporting Israel,” she said in her J Street video.

Maintaining Israel’s security: Warren has been outspoken in supporting defense assistance. “Israel lives in a very dangerous part of the world, and a part of the world where there aren’t many liberal democracies and democracies that are controlled by the rule of law,” she said in 2014 when she was challenged over her vote to increase funding for Israel’s Iron Dome missile defense system. Warren sounded a similar theme in her J Street video. “I believe that Israel is a strong and important ally. I am committed to Israel’s security and safety and cooperating closely on the threats the Israelis face from Hamas, Hezbollah and Iran,” she said.

Getting out of the Middle East: At a Democratic debate earlier this month, Warren agreed with Rep. Tulsi Gabbard of Hawaii, who opposes any American military presence in the Middle East. “I don’t think we should have troops in the Middle East,” Warren said, a comment that was shocking to pundits who see Gabbard as an outlier. Krieg told JTA that Warren was “referencing combat troops, not those stationed in the Middle East in non-combat roles.” That may be a distinction without a difference: The issue that prompted the debate exchange was Trump’s precipitous pullout of troops from Syria. Those troops were combat troops, but they were there to keep Kurdish allies safe from Turkey.

BDS: Krieg reiterated what Warren has said in the past about the boycotting Israel movement: She opposes it, but also opposes, on free speech grounds, legislative bids to counteract boycotts.