The Tell: What presidential wannabes said at J Street 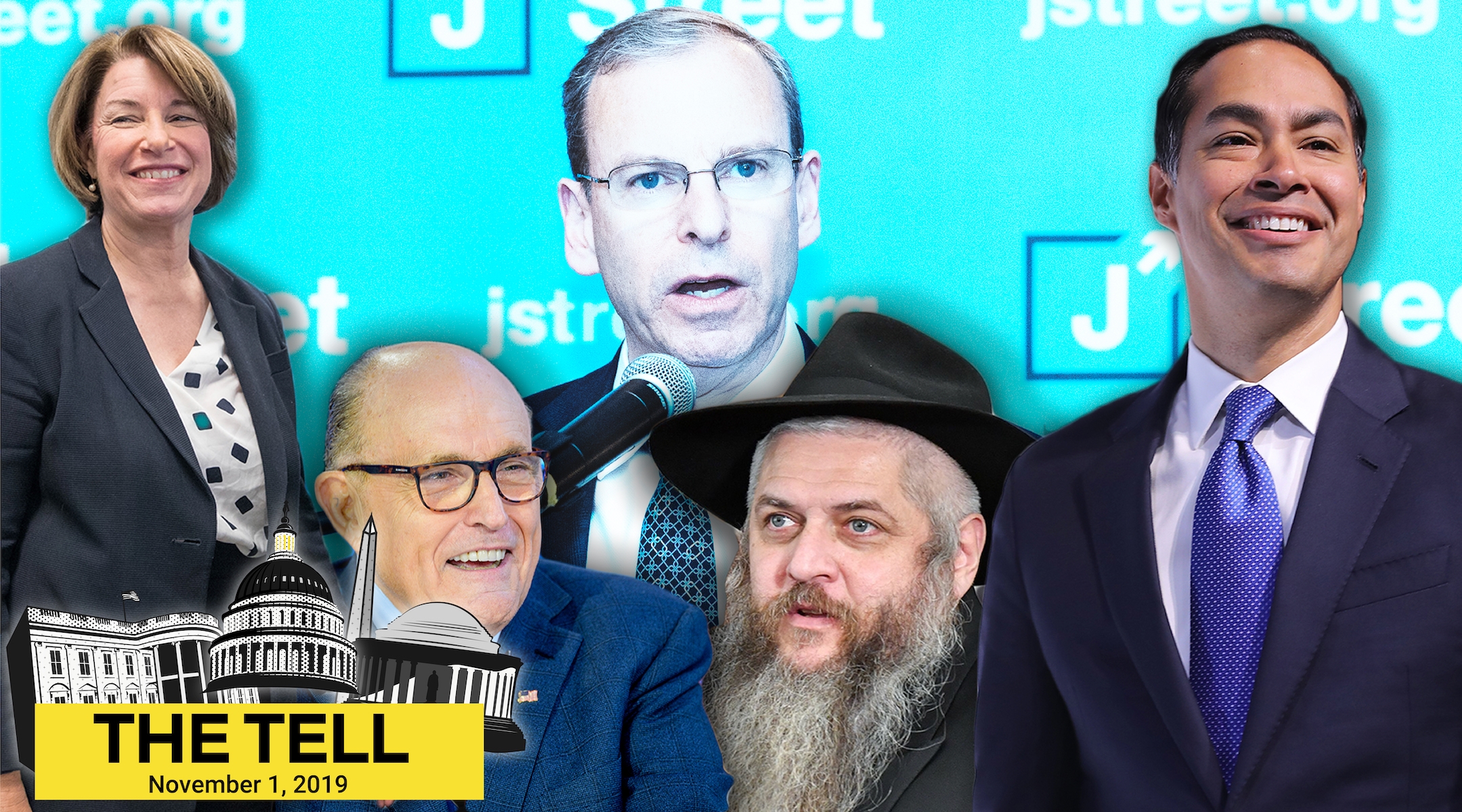 Taking a turn on J Street

J Street convened its eighth annual conference this week, its 11th year of existence. The gathering attracted 4,000 activists and marked a major turning point in how Democrats treat Israel: Withholding aid to pressure the Jewish state to comply with policy is now an idea that is very much on the table.

Plenty of top Democrats were at the conference — and seemed to be on board.

J Street now (sort of) open to leveraging aid: The group’s president, Jeremy Ben-Ami, spoke Sunday night at the opening plenary and offered this blistering line at the Washington Convention Center: “Our aid is not intended to be a blank check.”

But the next morning, talking to reporters, Ben-Ami added parameters to the pledge: He was referring to precedent and existing laws. J Street was not advocating new legislation to restrict aid to Israel.

And he was less conclusive than the “blank check” line had made it seem. Ben-Ami clarified that the leveraging aid idea should be considered, stopping short of giving it a full endorsement.

“If it is against American policy to expand settlements, shouldn’t we be inquiring whether any of our dollars are going there?” he asked.

Ben-Ami said assistance to Israel could be checked against, for instance, the Arms Export Control Act, which requires U.S. arms sales to be used strictly for self-defense.

He also said the idea of using aid to pressure was not new. A number of presidents have withheld portions of loan guarantees commensurate with Israel’s spending on settlements, a mechanism that is enshrined in law.

Even with these caveats, J Street’s embrace of leveraging aid was notable: Throughout its decade of existence, the group has been hands-off on aid to Israel, instead advocating for diplomatic means to advance a two-state solution.

Which presidential wannabes said what: Of the 10 Democrats running for president who delivered remarks to J Street, four were opposed to the leveraging aid idea: Vice President Joe Biden, Sens. Amy Klobuchar of Minnesota and Michael Bennet of Colorado, and former Housing Secretary Julian Castro.

Three backed it, to varying degrees of specificity: Sens. Bernie Sanders of Vermont and Elizabeth Warren of Massachusetts, as well as Mayor Pete Buttigieg of South Bend, Indiana.

Three avoided any comment: Former congressman Beto O’Rourke, self-help writer Marianne Williamson and entrepreneur Andrew Yang were among the five candidates who submitted video messages and were not subjected to the live grilling carried out by Obama administration alumni Tommy Vietor and Ben Rhodes.

Biden vs. Warren, Sanders and Buttigieg: Three of the four candidates leading in the polls — Sanders, Buttigieg and Warren — favor “leveraging aid.” Only Biden, forcefully (and unsolicited, in his video) stood up for aid unequivocally.

Sanders and Buttigieg in person and Warren via video delivered the same message: You don’t get something for nothing.

Sanders put it this way: “I would use the leverage, $3.8 billion is a lot of money and we cannot give it carte blanche to the Israeli government, or any government.”

Only Biden seemed forceful in advocating for maintaining assistance without strings.

“Israelis wake up every morning facing an existential threat,” he said in his message. “That’s why we always have to be adamant that Israel must be able to defend itself.”

Klobuchar initially declined to answer on aid. But then she pointed to what she described as President Donald Trump’s retreat from the Middle East and the dangers it has engendered, and said that “is why I am so wedded right now to make sure we are actually continuing the aid.”

Castro noted that Israel was in throes of changing governments and he would prefer to focus on the prospect of Israel not being led by Prime Minister Benjamin Netanyahu, who has curried disfavor among Democrats for his role in stoking tensions with the Obama administration and befriending Trump.

Where was Kamala? Of the eight candidates who did not show or send video, Sen. Kamala Harris of California stands out because of her closeness to her home state’s Jewish community and the pro-Israel crowd.

“We definitely invited Senator Harris to attend and to send a video, and had very good discussions with her team about both,” Logan Bayroff, J Street’s spokesman, told me. “Ultimately her scheduling did not work out to join us in Washington, and I believe her team was interested in sending a video but was not able to produce it in time for the event.”

The answer may lie in the chaos reported in her campaign: Her support, once robust, is flagging.

Schumer’s story: Senate Minority Leader Chuck Schumer told a riveting story that I had not heard in years of covering him at Jewish events, where his stories tend to be jokey. His great- grandfather had 18 children in a shtetl on the border of modern Ukraine and Slovakia. His grandfather was among the three youngest sent to America. Most of the rest of his family perished in the Holocaust. Nazis gunned down 31 of them after gathering them on the porch of the ancestral home.

Remembering the Pittsburgh shooting: It was one of the youngest candidates, Castro, at 45, who unprompted brought up Israel’s status as a refuge. “Yesterday was the anniversary of the Tree of Life massacre and it was also a very powerful reminder of why Israel exists in the first place as a place of refuge, safety … for the Jewish people,” he said to applause. (Conference speakers on several occasions marked the synagogue attack, the worst ever on U.S. Jews.)

Rudy’s rabbi: Sam Sokol and Anna Myroniuk delve into the Ukranian rabbi who may or may not be mixed up in Rudy Giuliani’s efforts to help Trump, his client.

From refugee to witness: Alexander Vindman immigrated from the former Soviet Union in 1979 when he was 3 years old. He and his twin made a photogenic pair plying the Brighton Beach boardwalk with their grandmother and attracted the attention of a professional photographer who chronicled their lives — and Ken Burns, who included them in a movie about the Statue of Liberty. Now a top National Security Council staffer, Vindman delivered dramatic testimony to the congressional impeachment inquiry into Trump, with firsthand knowledge of the president’s efforts to extract from Ukraine’s president a commitment to investigate Biden and his son.

A tale of two fly-ins: During conferences in Washington, Tuesday is the lobbying day. J Street was no different. Coincidentally, AIPAC was having its Fall National Council meeting, which also culminates in lobbying.

J Street pressed for nonbinding resolutions in the House and Senate enshrining the two-state solution. AIPAC, although on the record favoring two states at a time that Netanyahu and Trump have retreated from the outcome, did not push either resolution. Instead it backed legislation that would enhance sanctions on “enablers of Palestinian terrorist groups.”

AIPAC lobbyists emphasized the security assistance for Israel at a time that J Street was wondering whether it should be used to leverage pressure on Israel. J Street was backing the No Ban act, which would roll back Trump’s restrictions on immigration from some Muslim lands. AIPAC has never lobbied on a domestic issue — and unlikely ever will.

Trump is not the outlier you think he is: How concerned was Israel’s security establishment by Trump’s precipitous pullout from Syria, abandoning America’s Kurdish allies in that country to the predations of Turkey and others.

I asked Ami Ayalon, the former chief of the Israel Security Agency, or Shin Bet, at the J Street conference, where he was a speaker.

Trump’s decision, he said, “will increase instability,” but should be understood in a continuum of presidents who since President George H. W. Bush have retreated from a military presence in the region out of a sense that with the Soviet Union gone, American engagement in the Middle East was less necessary. Even Bush’s son, who launched the war with Iraq, in his second term settled on pulling U.S. troops away from the Middle East.

“We have to be honest,” Ayalon said. “America does not exist in the Middle East. Russia, Iran and Turkey are trying to shape the Middle East. We refuse to read the reality, although it is written on all the walls.”

Sam Brodey at The Daily Beast reports on Zeldin’s rise to prominence as Trump’s Jewish defender on Capitol Hill.

Good news for superstitious #Nats fans: I've changed flights and will be home tonight watching the game in the same seat as in Games 1, 2 and 6. #STAYINTHEFIGHT #StayOffTheFlight

J Street’s Ben-Ami wants to change the conversation about Israel. You might say he’s obsessed. He also really wanted the Washington Nationals to win the World Series (which they rallied to do in the deciding Game 7 on Wednesday night). You might say he was obsessed.