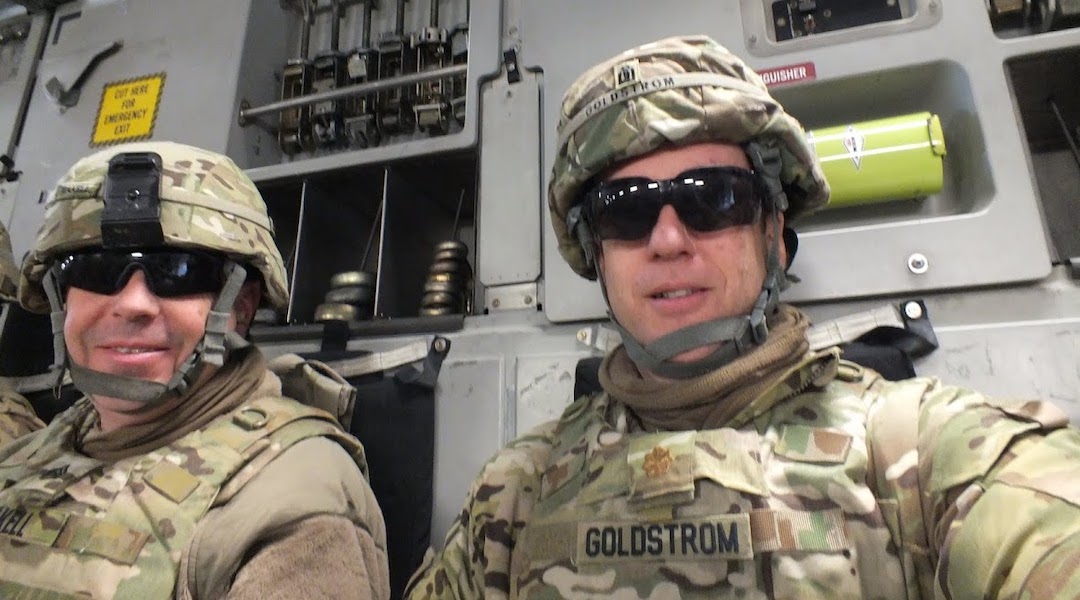 Goldstrom (right) with his chaplain assistant in Afghanistan, Sgt David Teakell, while riding to visit military personnel at other bases and outposts in 2013. (Courtesy of Goldstrom)
Advertisement

(JTA) — Near the start of the Iraq War in 2003, David Goldstrom found himself leading a Yom Kippur service for about 50 soldiers in one of Saddam Hussein’s former palaces in Tikrit, Iraq.

The prayer books and shawls came from his own supply. The Torah scroll was donated by a synagogue in Baltimore. Goldstrom led a discussion about the day’s reading from the Book of Jonah, which relates the story of a prophet ordered by God to go to Nineveh — an ancient city in what is now Iraq — but tries to run away.

“If someone is called to serve, is running away an option?” Goldstrom told the Jewish Telegraphic Agency, recalling the discussion. “In talking to Jewish soldiers, invariably they want to help make a difference wherever we are.”

Today, Goldstrom, 53, is the chief of chaplains at the Atlanta VA Health Care System. His military career has spanned more than three decades and taken him from the Middle East to the middle of the Pacific Ocean, and from being an active duty sailor to a rabbi on the front lines. Now he serves as chaplain for soldiers who have returned home and are, in many cases, waging a new fight to reintegrate into civilian life.

Goldstrom grew up attending a Conservative synagogue in New Jersey, the son of a Holocaust survivor who went on to serve in the U.S. Army in Germany during World War II. Uninterested in attending college and getting a desk job, Goldstrom joined the Navy straight out of high school. He served in the Pacific for nearly a decade.

There was barely any religious infrastructure in place for Jewish service members on Diego Garcia, the small Indian Ocean island where he was stationed in the late 1980s. Before Passover, Goldstrom would receive some packaged food — gefilte fish, matzah and matzah balls — from the Jewish Welfare Board, which supported Jewish services members. When he visited the chapel on the base for Jewish services, he was the only one who showed up. A military rabbi stationed in the Philippines who would occasionally visit Diego Garcia recruited Goldstrom to organize Jewish religious functions on the base.

When Goldstrom returned to civilian life in the mid-1990s, he attended college and became a public school teacher, which he saw as another form of serving his country. That interest in education, counseling and service — combined with a renewed interest in Judaism — eventually led him to the Orthodox yeshiva Ohr Somayach, where he received rabbinic ordination.

In 2001, just months before the Sept. 11 attacks, Goldstrom returned to the military, this time as a chaplain.

Over the next 13 years, Goldstrom served three tours in Kuwait and Iraq and one in Afghanistan. On the one hand, the job was like a pulpit rabbi, organizing services and attending to the concerns of his flock. On the other hand, it was totally different.

For one thing, he counseled soldiers of all faiths — not just Jews. And he had to make do with what he could carry in places with no local Jewish community. He recalls a Jewish helicopter pilot describing a Rosh Hashanah service his company held: there were only three or four people, and no prayer books.

“Lighting took a while, as one soldier worked at getting a kerosene lantern filled with olive oil to light because kerosene wasn’t available,” Goldstrom wrote for JTA in 2007, describing Hanukkah in Iraq.

The stakes were also a lot higher. Goldstrom regularly dealt with literal life-and-death issues. And unlike rabbis back home, he had few colleagues to turn to in real time if he needed some support of his own. He said he found solace in prayers — particularly the psalms written by King David, whom the Bible describes as a warrior who sought peace.

“When you’re the chaplain for a military unit and one of your soldiers is killed, you’re providing the memorial service, you’re working with the survivors under challenging circumstances and you may not have someone to talk to,” Goldstrom said. “It’s much rarer for a pulpit rabbi to have congregants die in their arms.”

Goldstrom moved to his current position at the Atlanta VA in 2015. He still counsels soldiers, but now instead of coping with a war zone, they’re trying to readjust to the home front. Many do just fine, he said. But some have trouble finding a job or a home. He’s particularly concerned about suicide among veterans. According to the VA, the suicide rate for veterans was 1.5 times that of all U.S. civilians in 2017.

One thing Goldstrom has noticed is that even though the veterans he counsels are away from the fighting, they can feel less safe. For all of the danger that comes with military life, it also gives service members a support system.

Goldstrom can understand that. Relatively few people, he said, have served in combat and then become chaplains. So he sometimes feels most comfortable hanging out with other veterans — even if they’re a generation older.

“The military service member has a military community that they’re embedded in and that looks out for them,” he said. “Then you take them out and you think we’re done, but we’re not.”