The Tell: The Jewish players in impeachment 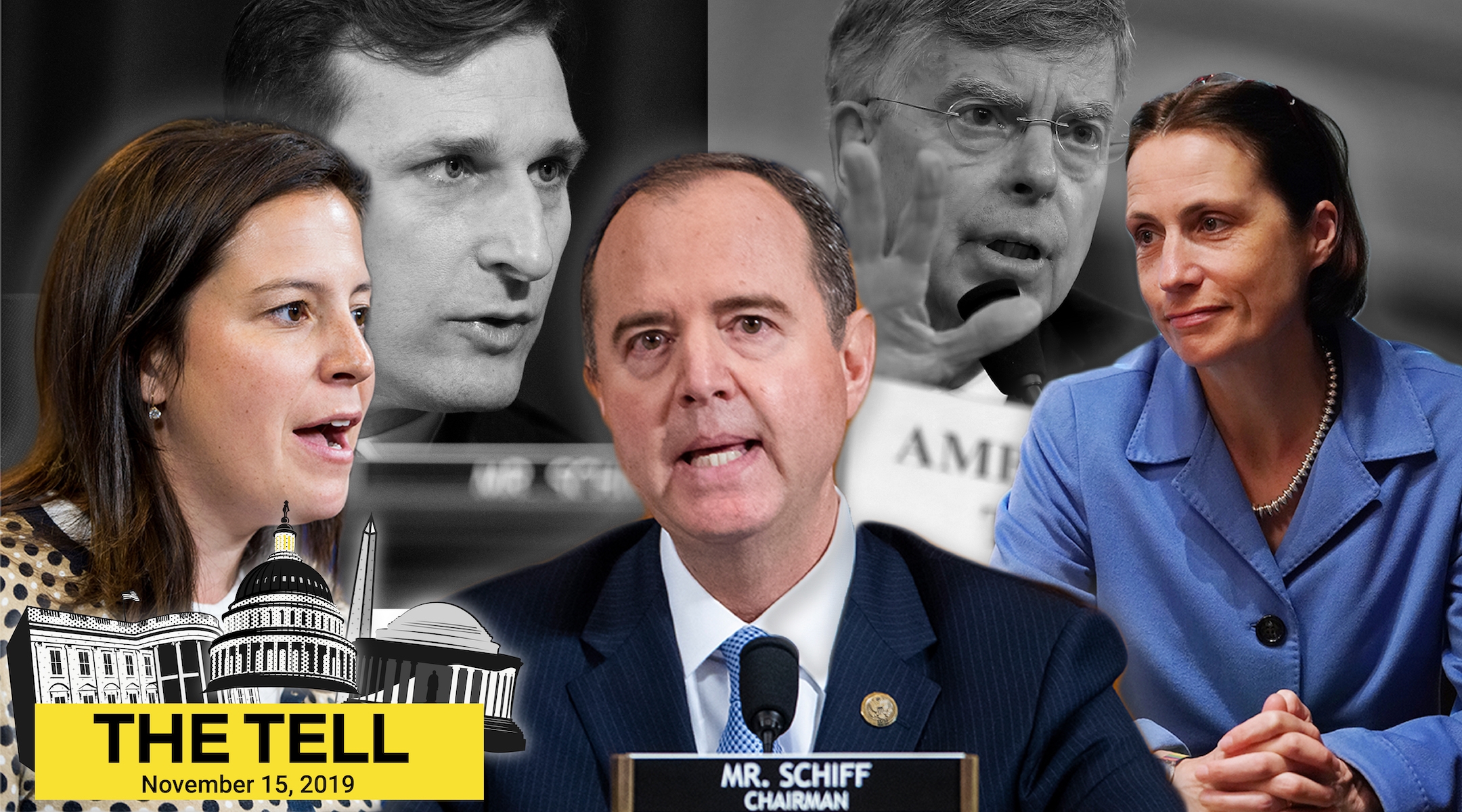 WASHINGTON (JTA) — The first public hearings in the Trump impeachment inquiry began this week with quite a splash.

A bunch of Jewish actors are at play in this drama, and we’ve covered some before:

In the hearings Wednesday, and in their aftermath, there were some new and familiar Jewish wrinkles. Here are a few:

Who was that lawyer?

Democrats handed the first 45 minutes of questioning to Daniel Goldman, and his restrained sarcasm immediately drew attention. “I want to spend a little time reading the transcript, as we’ve been encouraged to do,” he said. Trump has urged Twitter followers to “read the transcript” at least a dozen times. (Of course, Goldman proceeded to read parts of the transcript that backed the Democrats’ charges.)

Goldman is a former U.S. attorney who earned a reputation for busting mobsters and became a “TV lawyer” on NBC. (Watch him confess to popping the question to his wife with a ring inside a fortune cookie.) He’s also descended from Levi Strauss stock.

Nadler led the hearings related to the special counsel’s report into Russian interference in the 2016 election. But he was criticized in and out of his caucus for handing Republicans a political win — his hearings at times appeared hijacked by Republicans exercising parliamentary maneuvers, and commentators agreed that his primetime witness, Robert Mueller, fell flat in his public testimony.

Wednesday’s hearing, led by Schiff, was a stark contrast. Schiff cut off Republicans seeking to interrupt the hearings. Committee Democrats stuck to a script and asked the two witnesses pointed questions aimed at shaping a cohesive narrative.

It wasn’t until hours into the testimony that Republicans were able to score some points, with Rep. Jim Jordan of Ohio emphasizing that neither of the witnesses had first-and knowledge of the exchanges between Zelensky and Trump. Rep. Elise Stefanik of New York pointed out that the alleged bribe never came to fruition: Zelensky did not open an investigation into Ukraine’s involvement in the 2016 election or into Biden, and Ukraine eventually got its aid.

Soros, the liberal Jewish philanthropist who has become a bugbear for Trump and the Republicans, did not surface in the hearing — but he did in its prequel and aftermath.

Hill’s lawyer wanted it noted for the record that Stephen Castor, the lead Republican staff lawyer (who helped lead the questioning at Wednesday’s public hearing), was laughing when Hill brought up anti-Semitism. Castor shot back that it was “outrageous” and “ridiculous” to suggest he was laughing at Hill’s characterization of the smear campaign as anti-Semitic.

Soros also came up in Fox Business Channel post-hearing analysis: Victoria Toensing and Joseph DiGenova, the lawyer couple who represent a Ukrainian oligarch tied into the scandal, as well as John Solomon, a right-wing muckraker who has advanced the Biden corruption narrative, told Lou Dobbs that Soros runs, well, everything.

“There’s no doubt that George Soros controls a very large part of the career foreign service at the United States State Department. He also controls the activities of FBI agents overseas,” DiGenova said.  “He corrupted FBI officials, he corrupted foreign service officers.” DiGenova did not offer any evidence.

(Fun fact: DiGenova was the U.S. attorney who in the 1980s led the successful prosecution of Jonathan Pollard, the spy for Israel.)

Two Jewish witnesses are on the docket for next week, each with firsthand testimony.

Sens. Bernie Sanders of Vermont and Elizabeth Warren of Massachusetts, the leading left-wing candidates, expressed sympathy for both Israelis and Palestinians and called on both sides to change their behavior.

Granger danger: Rep. Kay Granger, the top Republican on the powerful Appropriations Committee, faces a primary challenge in her affluent North Texas district. Colleyville City Councilman Chris Putnam, a telecom software business owner, depicts Granger as part of “the swamp” Trump has pledged to drain — i.e., a Washington insider. He told The Texan in September that he plans to focus on spending. “Spending and debt are out of control in D.C.,” he said.

That raises alarm bells for AIPAC-affiliated donors for one obvious reason: Granger is a longtime friend of the lobby who is now in one of Congress’ most influential spending decision roles. It’s alarming enough for the pro-Israel community that Nita Lowey of New York, who chairs the committee, is leaving next year.

Brother Bernie’s Sister Souljah moment: Bernie Sanders writes about anti-Semitism for Jewish Currents in what is probably his most expansive riff on his Jewish identity. Not so surprising: Bashing Trump for enabling anti-Semitism. Somewhat surprising: Taking the left to task for its occasional expressions of anti-Semitism, “especially when it denies the right of self-determination to Jews, or when it plays into conspiracy theories about outsized Jewish power.”

Bible bump? Rep. Elaine Luria of Virginia holds a Hebrew Bible in an ad that explains why she is backing Trump’s impeachment. The camera goes so close up that viewers can see her name inscribed on it.

Nick Fuentes answers questions during an interview with Agence France-Presse in Boston, May 9, 2016. (William Edwards/AFP via Getty Images)

At The Nation, Jeet Heer examines the Nick Fuentes-led “groyper army” — white nationalists and anti-Semites who attend conservative and Republican events and try to corner speakers into endorsing their views. Heer considers the degree to which establishment conservatism is responsible for “groypers.”

Actor and director Zach Braff wants the dog with the tail on its head.