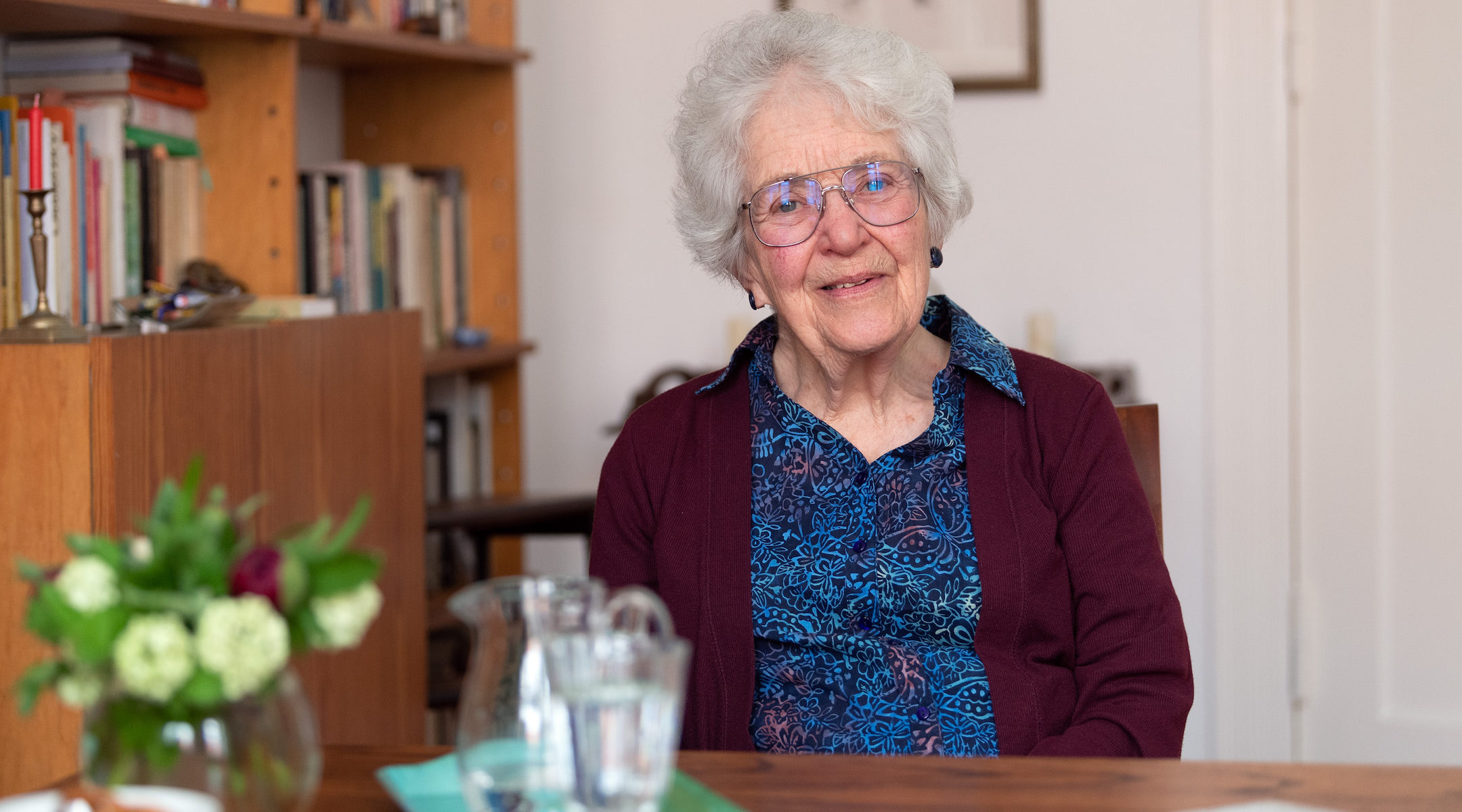 Laureen Nussbaum, childhood friend of Anne Frank: "We have to resist and do our best. That's all we can do." (Soeren Stache/picture alliance via Getty Images)
Advertisement

(JTA) — At age 92, Laureen Nussbaum is one of the few people still alive who personally knew Anne Frank.

Nussbaum’s family lived in the same Amsterdam neighborhood as the Franks, and Anne’s father, Otto, was the best man at her 1947 wedding. After the war, Otto spent months trying to find his daughters, Anne and Margot, who had been deported to Bergen-Belsen. With Nussbaum’s husband, Rudi, Otto would go to the train station every day with photos of his children hoping for news of their fate.

“They showed those pictures and asked everyone, ‘Did you by chance know this woman? Did you know by chance know these girls?’” Nussbaum said in an interview with the Jewish Telegraphic Agency. “And that’s how they bonded.”

The effort was ultimately for naught. Of the 100,000 Dutch Jews deported from the Netherlands between 1942 and 1945, only 5,200 survived. Neither Rudi’s mother nor the Frank daughters were among them.

But Nussbaum’s entire Jewish family survived. In her new memoir, “Shedding Our Stars: A Story of Hans Calmeyer and How He Saved Thousands of Families Like Mine” (written with Karen Kirtley), Nussbaum focuses less on her famous friend than on Calmeyer, the little-known German official who saved her family.

“So much has been made out of Schindler, who saved 1,200 Jews, and people really empathize with him and made him a hero,” Nussbaum said, speaking of Oskar Schindler, the German factory owner immortalized in the Oscar-winning film “Schindler’s List.” “And I felt that Hans Calmeyer, who has saved more people, is too unknown in the world. There are books about him in Dutch and German, but nothing in English, except for a citation from Yad Vashem when he was declared a Righteous Among the Nations in 1992 — but that’s just four lines. And I thought it was time that people knew about him.” 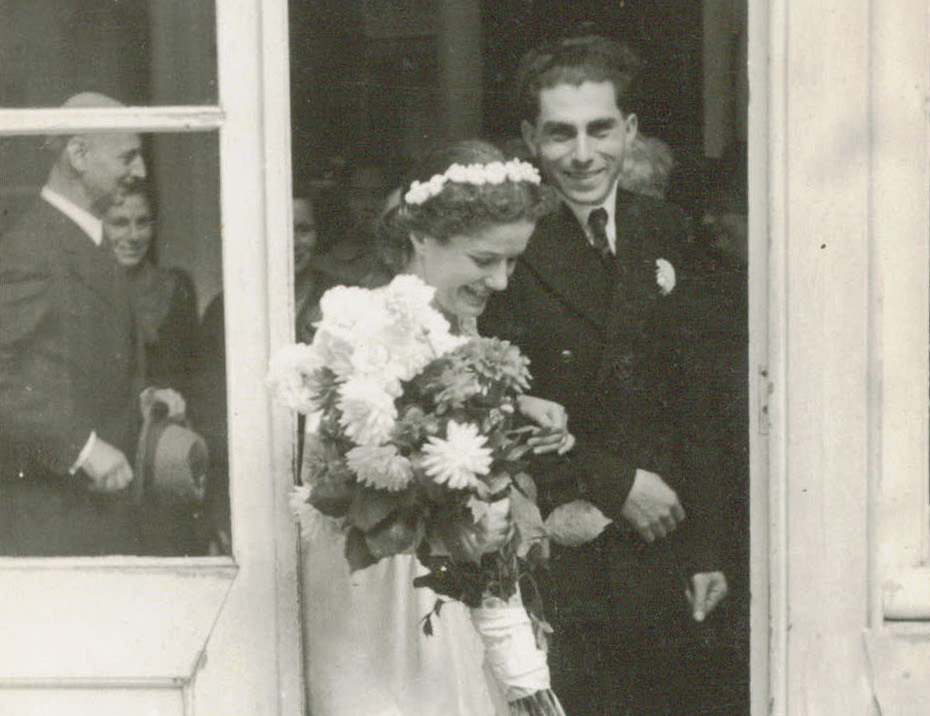 Laureen and Rudi Nussbaum leave Amsterdam City Hall after their wedding, Oct. 15, 1947. Otto Frank is behind the glass panel. (Courtesy of Laureen Nussbaum)

Calmeyer was a German lawyer who, starting in March 1941, was assigned to adjudicate cases in which a person’s Jewish status was in doubt. He successfully argued to his superiors that individuals should be permitted to challenge their Jewish status if their grandparents could not be proven as Jews.

During his tenure, Calmeyer oversaw 5,600 such petitions and is credited for saving thousands of Jewish lives.

“In two-thirds of the cases, he decided in favor of the petitioner, knowing that he was being cheated,” Nussbaum told JTA, meaning Calmeyer was making it easier for petitioners to make the claim that they were not Jewish. “He allowed himself to be cheated.”

Nussbaum was born Hannelore Klein in Frankfurt, Germany, in 1927. Even as a child, she had been acutely aware of rising anti-Semitism in her native country. One year, Jewish children were no longer allowed to attend classes with non-Jewish children and Nussbaum was forced to use a separate entrance to her school. The girl who walked with her to school each day would no longer walk with her.

“It was quite palpable,” Nussbaum recalls. 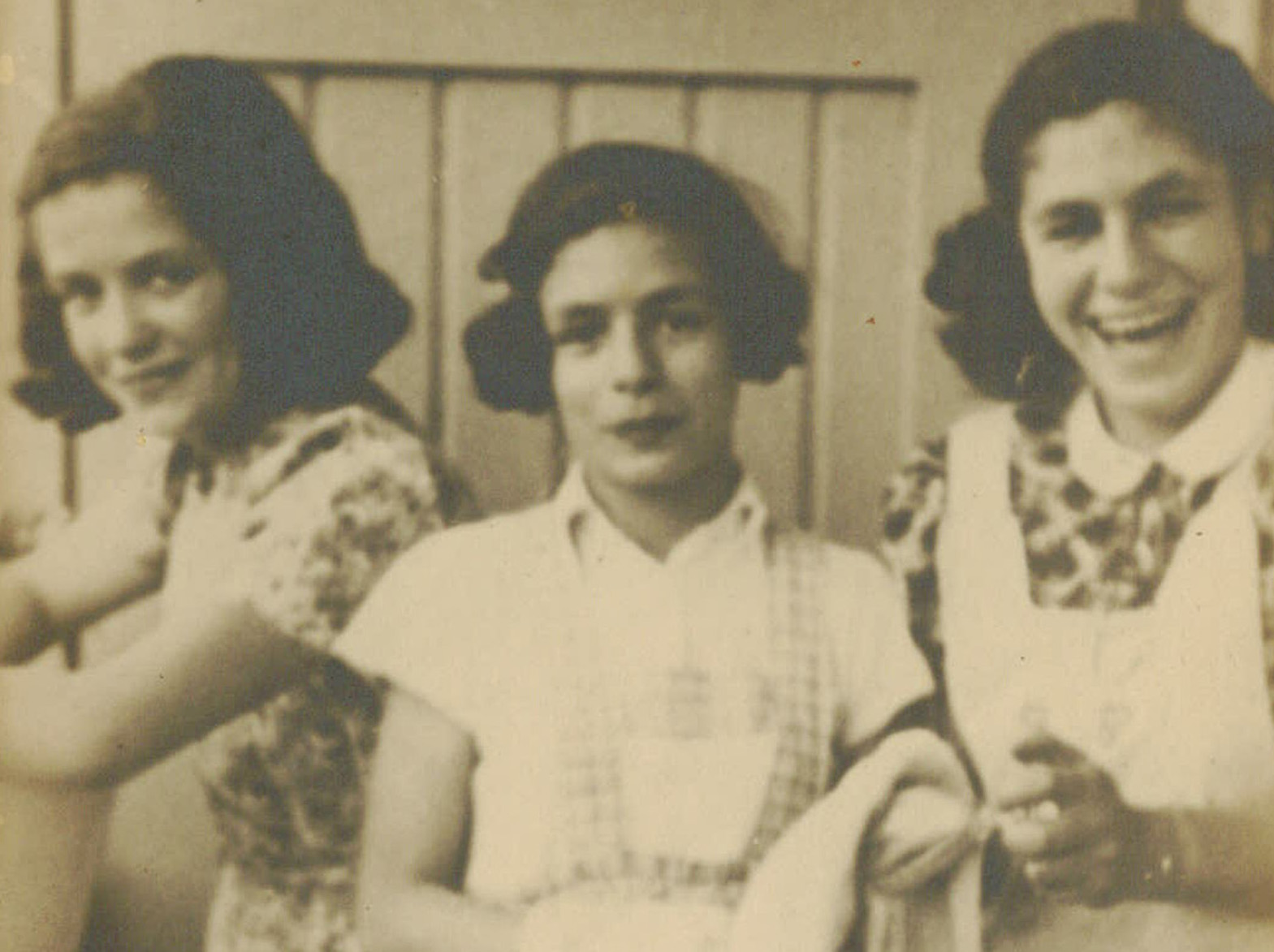 Left to right, the Klein sisters Hansje (Laureen), Marion and Susi in Amsterdam in the early spring of 1942. (Courtesy Laureen Nussbaum)

The Klein family fled to Amsterdam in 1936, where they moved in near the Franks. The Germans invaded in 1940, and in 1942 Jews were forced to register with the authorities and wear yellow stars on their clothing. In June of that year, the deportations began.

That summer, the Franks went into hiding in the secret annex that Anne would make famous in her diary. But the Kleins had become “Calmeyer Jews” and were able to continue to live openly. Nussbaum said she wrote about Hans Calmeyer, seen in a 1940 photo, because “I thought it was time that people knew about him.” (Courtesy of Laureen Nussbaum)

Calmeyer declared Nussbaum’s mother “not Jewish” and they were allowed to remove the yellow stars on their clothing. With their new legal classification, the family could move about freely.

“It wasn’t true, my mother was half-Jewish,” Nussbaum said. “But once he had settled it, we were foolproof.”

While her family was not forced into hiding, her then-boyfriend and future husband was. That’s why she wasn’t surprised to read about Anne’s description of her life in hiding.

“I had been so close to it,” Nussbaum said. “I had seen my boyfriend Rudi in hiding, [and] I had taken care of another couple — I knew exactly what it was like to live in hiding. So I did not find this very earth-shaking. For me, what was really important was to hear a young person express herself so well.”

The Nussbaums eventually moved to the United States after Rudi completed his doctorate in nuclear physics in 1954, ending up in Portland, Oregon, in 1959. 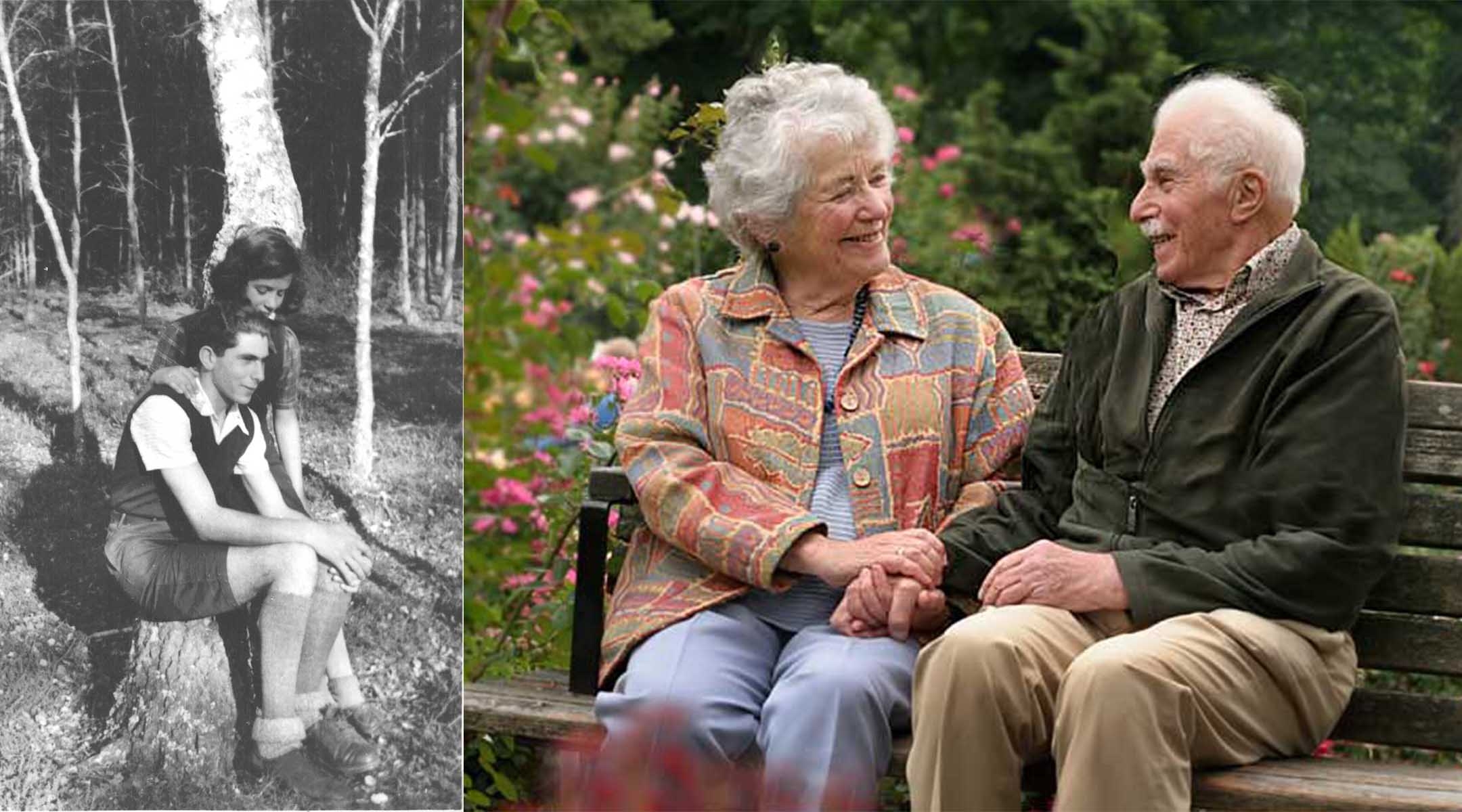 A scholar of German language and literature, Nussbaum received her doctorate from the University of Washington and joined the faculty at Portland State University, where her areas of expertise focused on German literature and German writers in the Netherlands. Most of her scholarship has focused on Anne.

She wrote the afterword to Anne’s novel, “Liebe Kitty,” which has only been published in German, and she has expressed her frustration that the version of Anne’s diary that Otto published was adapted and changed from the version Anne herself had prepared for publication.

“When I found that out, I was very upset that he had done that,” Nussbaum said. “Because nobody has the right to mess with anybody else’s text, whether that anybody else is a child or not a child. The author’s last version is what people need to read. And so I have been on my soapbox for a quarter century preaching the gospel of Anne’s revised version.” 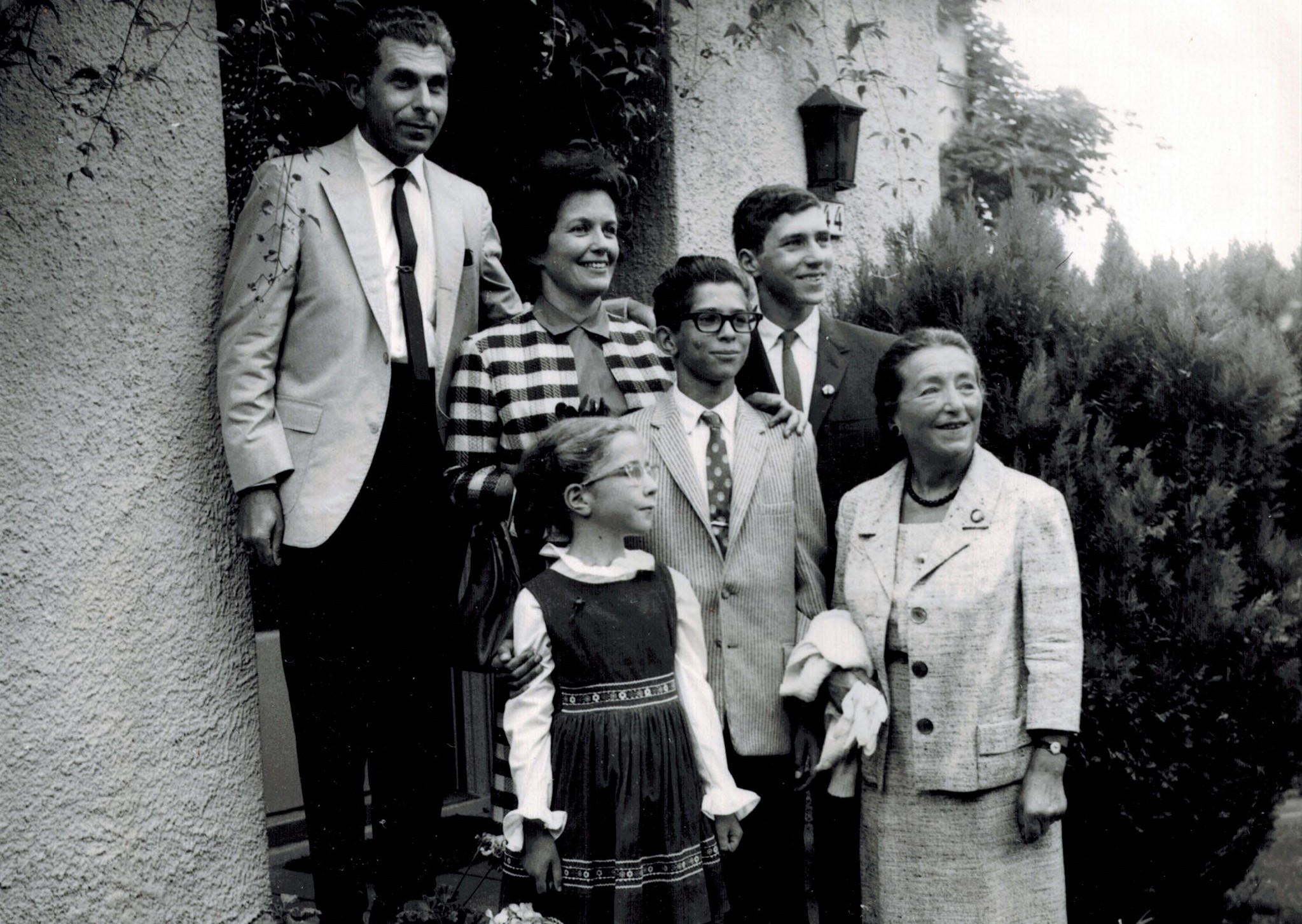 Nussbaum’s memoir doesn’t dwell on any of this, focusing instead on her own life and that of the man who saved her family. Nussbaum believes Calmeyer’s story is deeply relevant today as a model of resistance.

Calmeyer engaged in a kind of low-key sabotage to thwart the Nazi agenda, working within the existing power structure to save as many Jews as possible. At a time of rising populism across the Western world, Nussbaum hopes Calmeyer’s example can serve as inspiration.

“Sometimes it’s just little things, people within their own realms can find ways to actively stand up for their opinions,” she said.

“Whether we will be successful or not, I cannot predict. But for our own integrity, those of us who are convinced that things are being done the wrong way, I think we have to, each in his or her own way, resist and do our best. That’s all we can do.”