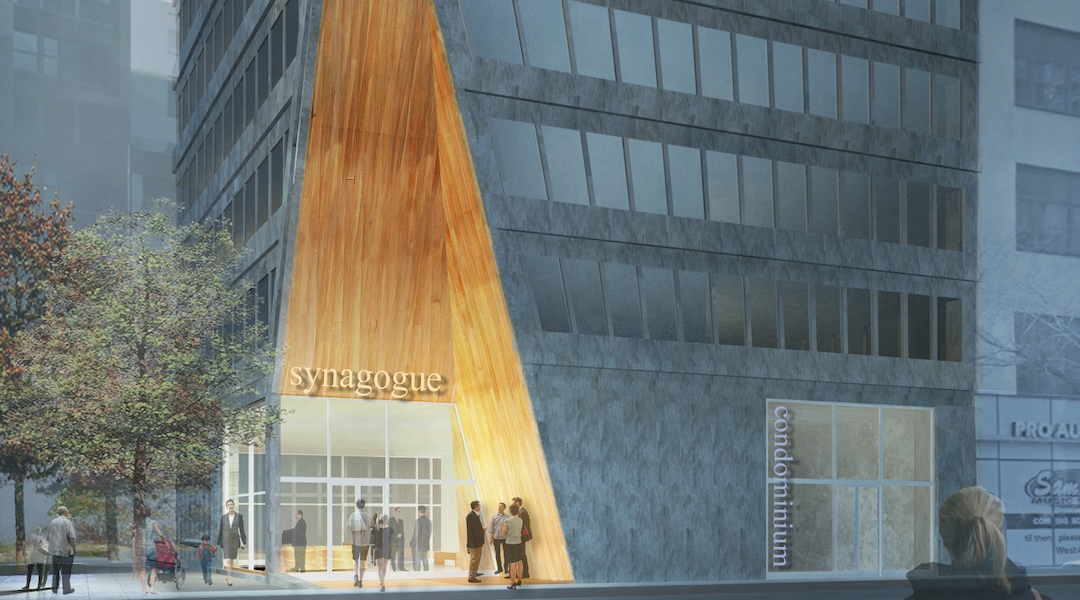 A rendering of the exterior of the proposed West Side Jewish Center SynaCondo. (Courtesy of Esther Sperber and Studio ST Architects)
Advertisement

NEW YORK (JTA) — One of the most active times of day at the West Side Jewish Center begins precisely at 1:40 p.m., when 60 or so middle-aged men trudge in, mutter through the afternoon prayer service with their coats on, maybe throw a couple dollars of charity into a metal cup and walk back to their jobs. The whole thing is over in about 15 minutes.

Other than that and two shifts of morning prayers, the building is mostly empty during the day. On a recent weekday afternoon, two men studied Jewish texts in Yiddish in a wide room at the front of the building. Long curtains obscured boards bearing the names of generations of congregants who have died. Hot water boiled in a machine that looked like it came straight out of a 1980s diner.

The overall impression of mustiness belies what is, in fact, an active congregation with good prospects. Not many synagogues can boast more than 100 people praying on a daily basis. The congregation, established by immigrants in 1890, recently renamed itself the Hudson Yards Synagogue to better attract residents of the posh new development of the same name that just sprung up nearby.

But as the 94-year-old synagogue stands on the cusp of a new era, its building is both its greatest asset and liability. On the one hand, the structure is dilapidated and inaccessible to people with disabilities — a significant problem when a good portion of your regulars are senior citizens. On the other hand, it’s valued at $55 million thanks to its location on one of the busiest streets in the busiest city in America.

That’s why the congregation is looking into demolishing the whole thing and rebuilding it as a condominium — with a synagogue on the lower floors.

“This building needs major work,” Rabbi Jason Herman said. “We’re putting a lot of Band-Aids on it. In addition to funding the building, we want to fund programming and operations, so we can become the shul that’s attractive to the neighborhood in the Hudson Yards.” 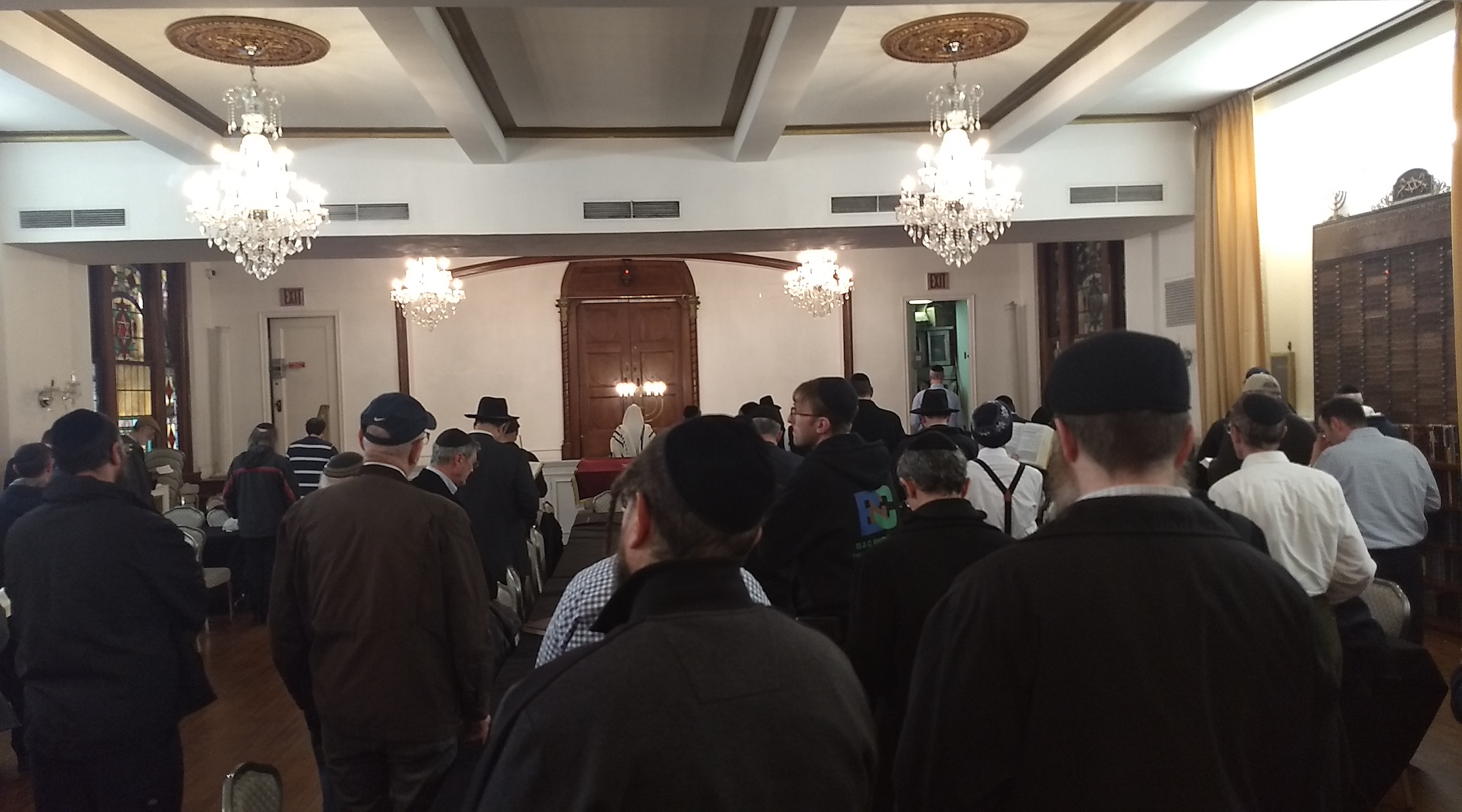 The afternoon prayer service at the West Side Jewish Center, held in its multipurpose room, is one of the synagogue’s busiest times of day. (Ben Sales)

The SynaCondo concept, as architect Esther Sperber calls it, could be a win-win for developers and the synagogue. Developers get to build in some of the most desirable parts of the city, while synagogues get much-needed cash and state-of-the-art spaces.

Sperber’s renderings envision a wood-paneled basement sanctuary lit by a skylight and an outdoor garden for the synagogue’s exclusive use one floor above. Additional space that could be used for social events is available beneath the sanctuary, two floors below ground level.

“This was an opportunity to think about a problem that seems really relatable to other properties in the city,” Sperber said. “If you give up that dream of being above grade and use that space that’s less valuable to the developer, you can actually get more space and find a way to make that space unique and special and beautiful.”

The West Side Jewish Center would not be the first synagogue in New York City to attempt such a transformation, but it could be the first to succeed. Though on paper it seems like a great idea, in practice deals like this can turn into nightmares.

Both The Young Israel of Manhattan on the Lower East Side and the Fort Tryon Jewish Center in Washington Heights — both historically Jewish Manhattan neighborhoods now in the throes of gentrification — sought to go the condo route. But developers who began working on the buildings were unable to complete them, leaving the projects in limbo and the synagogues renting space elsewhere. (Full disclosure: I am a member of the Fort Tryon Jewish Center.)

“Unfortunately, in 2008, everything fell apart, so our contractor also sort of fell apart,” Rabbi Yeshaya Siff of the Young Israel said. “Since then, the question is, what to do now because the people [at the synagogue] are older and the whole area is becoming upgraded, gentrified. The question is, how realistic is building all of this now?”

Other synagogues in the city have also faced hurdles in rebuilding. Lincoln Square Synagogue, a prominent Modern Orthodox congregation on the Upper West Side, sold its property and began construction on a new facility nearby. But the synagogue nearly ran out of cash and had to be bailed out by an anonymous $20 million donation in 2010. It opened its new doors three years later.

Kehilath Jeshurun, a tony Upper East Side synagogue whose building was charred by a fire in 2011, received $9 million from insurance. But the rebuilt interior, which reopened in 2015, cost nearly $40 million to complete, according to The New York Times.

Sperber says synagogue real estate deals like these are especially fraught because they combine Manhattan’s complex market with the unique demands of an Orthodox community that generally cannot change locations and whose chain of command is at times confusing. 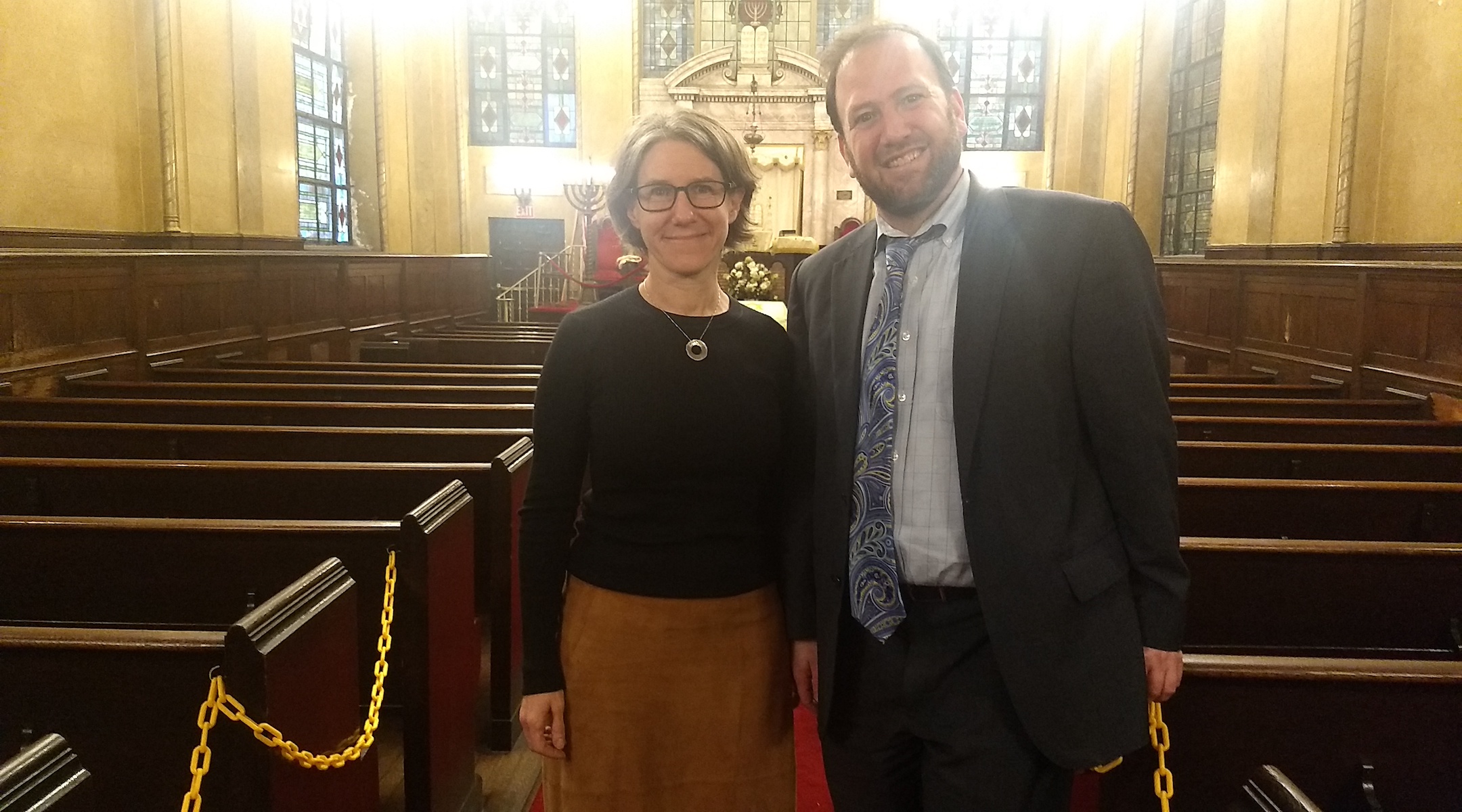 Rabbi Jason Herman and architect Esther Sperber stand in the sanctuary of the West Side Jewish Center. (Ben Sales)

Other synagogues appear to be executing the condo transition more successfully.

Habonim, a congregation on the Upper West Side, had a nursery school that was outgrowing its existing space. Constructing a new building would have cost too much, so instead the synagogue inked a deal with a condo developer. In the meantime, the synagogue has been operating out of rented space.

Richard Verner, Habonim’s board president, estimates it will take another three to four years for the synagogue to move into its new building — a longer timeline than it expected when it began planning the sale several ago.

“It’s a long process and any change is difficult for a community, so it would have been great if we could have closed the doors on the old building and a year later moved into a lovely new building, but that’s not the way things work in New York,” Verner said. “We’re trying to keep everyone excited about the end result.”

Shaare Zedek, another Upper West Side synagogue, also has been in a temporary space since 2017 as its SynaCondo is being built. The synagogue is partnering with Kehillat Hadar, an egalitarian prayer group in the neighborhood.

Michael Firestone, the synagogue president, said the choice to demolish the old building was difficult but obvious, and he remains optimistic that everything will work out.

“We’re the third-oldest shul in Manhattan. We started in the Financial District, went to the Lower East Side, then Harlem,” Firestone said. “There was a lot of emotion tied up in it, but the vote to do the deal was unanimous. The community recognized that this was a moment in history that had to be met boldly.”